British shoppers will spend almost £13BILLION in final days of 2018

Britain’s shoppers are predicted to spend nearly £13billion in the sales over the ‘Twixmas’ period between Christmas and New Year.

The expected in-store spending of more than £8.6billion between Boxing Day and this Sunday will provide a boost to the country’s beleaguered high streets.

A further £4.2billion will be spent by UK shoppers online, bringing the total five-day average spend for Britons to £452 each as the January sales kick-off early.

The three categories top of people’s wish lists are clothing and footwear (53 per cent), homeware (18 per cent) and cosmetics and perfume (17 per cent).

The VoucherCodes.co.uk study also found expected savings in the January sales could hit £3.3billion, with an average saving o £116 per head in previous years.

Jimmy New, director of marketing at VoucherCodes.co.uk, said: ‘Although a significant amount of January spend has moved to the Twixmas period, the New Year sales remain a great opportunity to snap up a bargain.

‘Looking at the items topping this year’s wish lists, and in spite of the financially uncertain times ahead, it seems shoppers are keen to treat themselves while they still can.’

The research was conducted among more than 2,000 adults by the Centre of Retail Research and Opinium on behalf of VoucherCodes in October.

Bargain hunters gathered outside shopping centres in London, Birmingham and Manchester, and 2,500 shoppers were outside a Next store in Newcastle before 6am.

But across the UK, the number of shoppers hitting the high street and out-of-town retail parks fell for the third year in a row, despite massive discounts.

Analysts blamed online shopping and the popularity of Black Friday and pre-Christmas sales, meaning consumers are being bombarded with almost continuous discounting.

Shopping centres and retail parks saw the biggest slump, with footfall down by more than 5 per cent on last year.

Town centres and high streets fared better but still saw their footfall cut by 1.1 per cent, analysts Springboard said. Overall, the national average fell by 3.1 per cent, compared to 5.5 per cent last year. 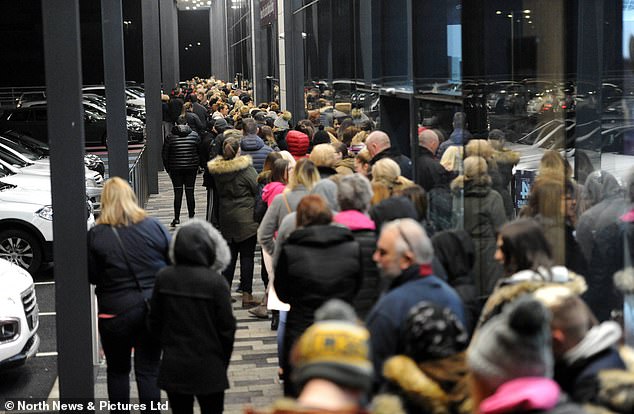 London bucked the trend as foreign tourists took advantage of the weak pound. And websites saw increased sales, with Currys PC World receiving a record number of orders, up 11 per cent on last year.

Almost a third of Britons said they planned to hit the sales and were predicted to spend £5billion yesterday.

But the majority said they would do most of their shopping online – 69 per cent, compared to 42 per cent last year. Some sites crashed as they struggled with the demand, including JD Sports, and some high-end items sold out by noon.

On the Selfridges website, a black Mulberry Bayswater leather handbag reduced from £950 to £475 sold out within hours, as did a £1,275 wool jumper by Balenciaga after its price was cut to £495.

LovetheSales.com found the average discount offered online was 43 per cent, a 6 per cent increase on Boxing Day last year, and predicted an online spend of £1.1billion.

He said: ‘Tourists are out in force driven by the weaker pound.’

Two of the capital’s biggest shopping centres, the Westfield centres in Shepherd’s Bush, west London, and Stratford to the east, reported a 13 per cent increase in footfall. 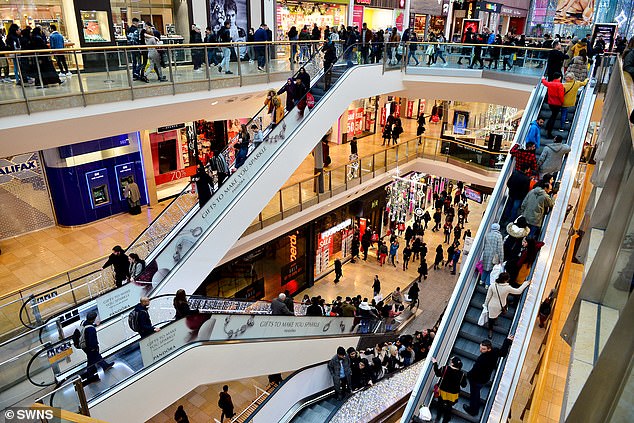 But the 3.1 per cent fall at shops around the rest of the country marked a disappointing end to a year which has seen many retailers struggle.

Springboard said: ‘Part of the reason for the drop in footfall is the almost continuous discounting that has been taking place by retailers this year, which negates the reason to defer purchases to Boxing Day.’

It has been a torrid year for retailers, with names such as Poundworld and Maplin falling into administration.