Matthew Hedges has begun a life jail sentence in the United Arab Emirates after being accused of spying.

The Government has said it has seen no evidence to back up this claim, while his family and colleagues have defended him as an academic researching in the Gulf state. But what do we know about Mr Hedges?

Originally from Exeter, he is a 31-year-old PhD student at Durham University and is married to Daniela Tejada.

She has fought his corner since he was arrested at Dubai airport on May 5, initially on undisclosed charges.

The ‘brilliant researcher’ and ‘man of integrity’ was visiting solely to perform academic research, she said.

He was reported to have been interviewing sources about the country’s foreign policy and security strategy.

His Durham University profile states that his interests include Middle Eastern politics, the changing nature of war, civil-military relations and tribalism.

A statement from academics said he completed a Masters degree in Middle East Studies at Exeter before beginning his PhD at Durham in 2013. 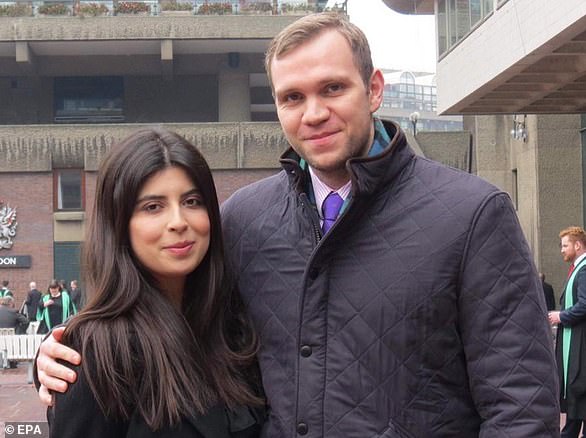 His wife has fought his corner since he was arrested, initially on undisclosed charges

His thesis was near completion and had been carried out ‘in full accordance with Durham University’s research and ethics procedures’, the joint statement from both institutions said.

‘His academic colleagues speak highly of his work, noting both his diligence and level of scholarship, as well as his undoubted passion and care for the Arab Gulf and its people,’ it added.

It emerged that Mr Hedges was being held on allegations of spying, which were vehemently denied.

His family said he was held in solitary confinement with little access to legal advice for almost six months.

But a little over a week later, on November 21, he was sentenced during a five-minute hearing to life in prison, pending an appeal.

On hearing the sentence, he ‘started shaking’ and had to ‘double-check’ with the Arabic translator that he had understood correctly, said his wife, who was present in the Abu Dhabi court.

Mr Hunt said the UK has been presented with ‘absolutely no evidence’ to support the charge and vowed ‘serious diplomatic consequences’ if the academic is not freed.