Killed: Rebecca Johnson, 26, from Fife, was stabbed dozens of times

The boyfriend of a Scot who died after being stabbed up to 40 times at a Christmas resort in Lapland yesterday admitted killing her.

He claimed he had no memory of attacking the 26-year-old, from Burntisland, Fife, using a 4.5in knife, saying he must have been suffering a temporary breakdown.

Lapland District Court in Rovaniemi was told the relationship had a history of verbal and physical abuse.

A WhatsApp message from Miss Johnson’s sister read out in court urged her to report him to his boss and warned: ‘He may end up killing you.’

Court papers say the pair argued on the morning of the attack on December 3, after which 36-year-old Frybl ‘went into the cabin where Rebecca Johnson was talking on the phone and, without warning, hit [her] several times with the knife. Frybl continued to hit Miss Johnson with the knife while she was on the floor.’

The court later heard the transcript of a frantic 999 call by a colleague, Joe Pickles, who found Miss Johnson dying in the cabin in the village of Kuttanen and told officers she had been attacked by ‘Radek’, a pseudonym adopted by Frybl.

A terrified Mr Pickles said he was scared Frybl might come back, adding: ‘I don’t want to die.’

Frybl was arrested following a manhunt involving snow scooters and a helicopter. 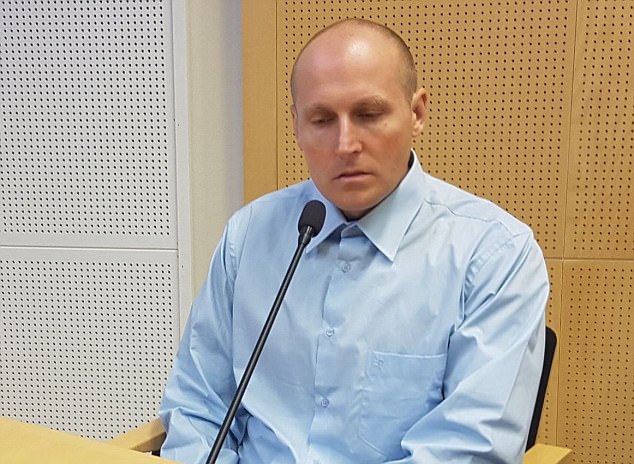 The lover: Czech ex-soldier Karel Frybl admits to killing his partner, as her family members reveal they had warned Miss Johnson that he might end up doing just that 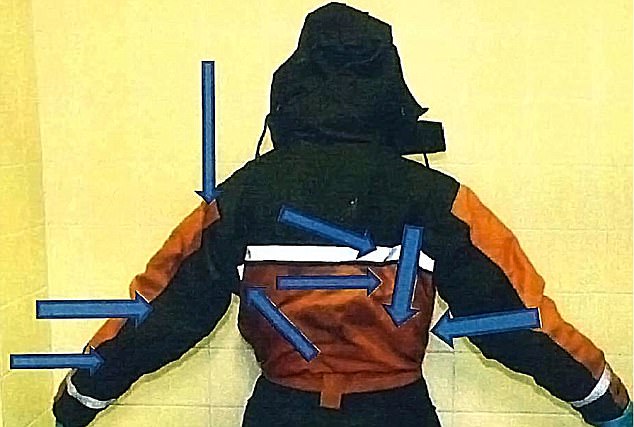 Evidence: Miss Johnson’s jacket is shows with arrows pointing to where a knife entered her body during the brutal attack in Finland last year 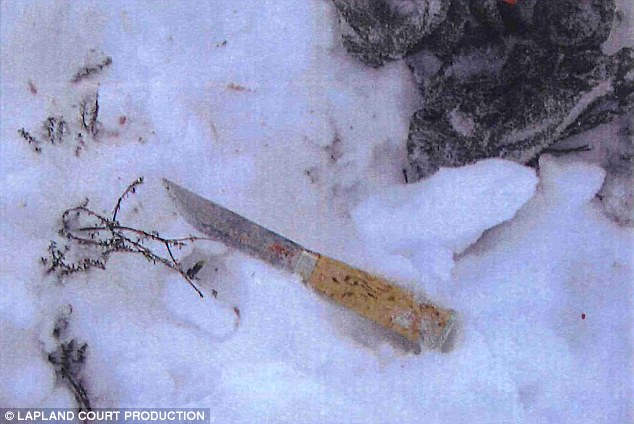 Evidence: Police found a bloodied knife in the snow during their investigation

The court heard he fled on a dog sled in temperatures of -30C before being captured suffering from hypothermia.

He had two stomach wounds, which prosecutors say were self-inflicted, though Frybl’s lawyer suggested he was stabbed by Miss Johnston after the row.

His lawyer said had served with the Czech army in Kosovo and Afghanistan, which may have left him with poor mental health. The pair had moved from Scotland where Frybl had been a butcher and slaughterhouse worker.

Relatives, including Miss Johnstone’s parents Anne and Henry, sister Victoria and brother Scott, were in court, wearing purple ribbons in her memory. 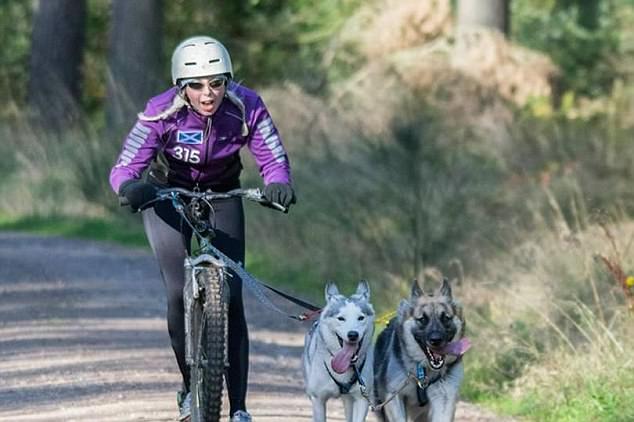 Fight: The couple had reportedly had an argument over the ownership of puppies 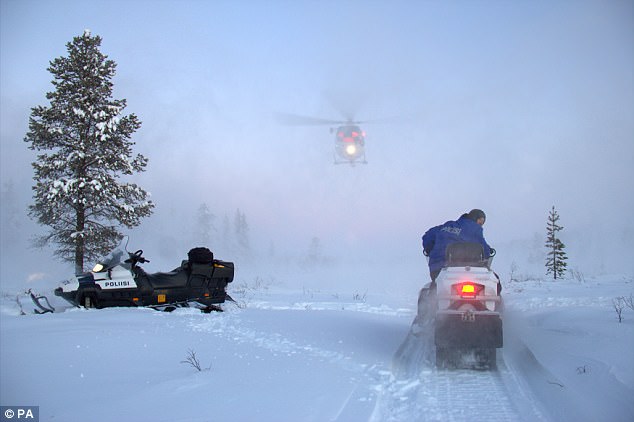 They fought back tears as text messages recovered from Miss Johnson’s phone were read out in court, allegedly detailing Miss Johnston’s concerns about her abusive relationship with Frybl.

One said: ‘He slapped me across the face. He smacked me at the back of my head that really hurts.’

Another said: ‘He threw a plate and table at me, also slapped me across the face.’

After one text exchange, her sister, Victoria, texted back: ‘You need to tell people at the hotel. He is a danger to you. He may end up killing you.’

Prosecutors have called for Frybl to face life imprisonment if found guilty of murder, alleging that the killing was ‘committed in a particularly brutal and cruel manner’.

Frybl said he had planned to move out of their cottage on the morning of the attack but the couple argued again over the ownership of husky puppies. 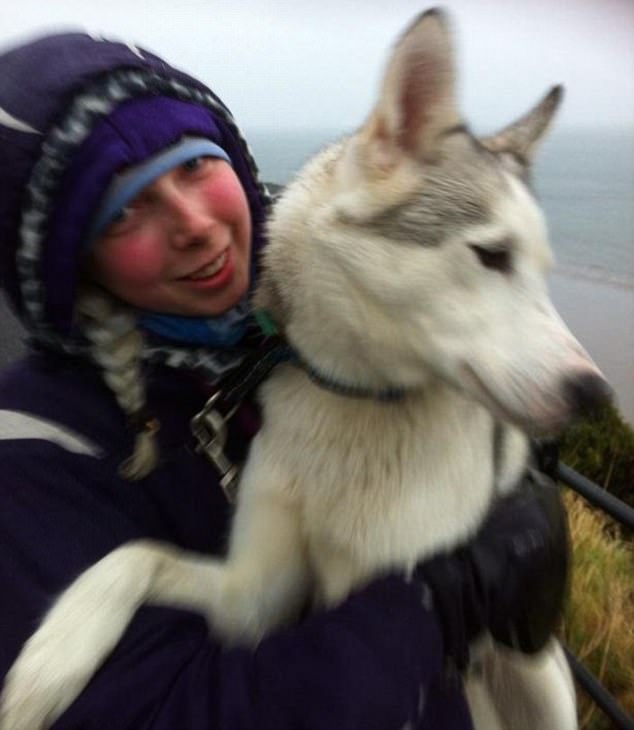 Rebecca Johnson was stabbed to death in Finland, where she worked as a tour guide 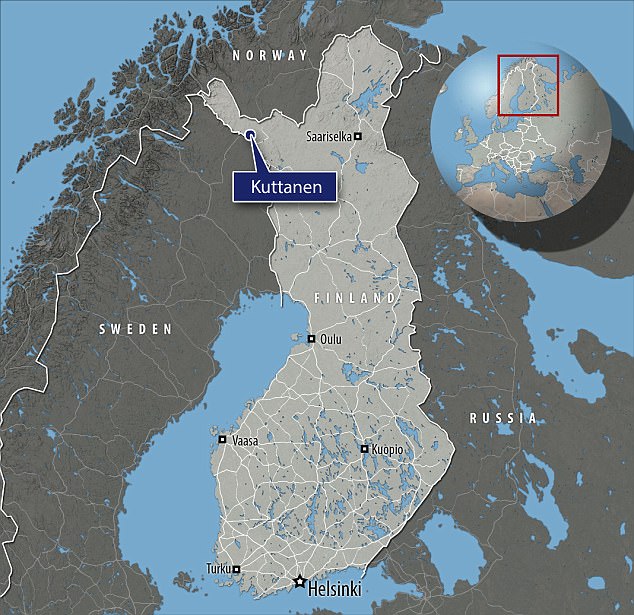 Ms Johnson was found dead at a property in the village of Kuttanen, which straddles the border with Sweden, just weeks after moving to the region to work for a local tour company

He said matters escalated when she slapped him then he saw her on her phone. He told the court: ‘She said on the phone, “I want him removed from the farm”.’

He said they traded insults before he turned back to face her.

He said: ‘I felt this impact on my chest and sharp pain. I fell to the ground… the next thing I was getting up. I remembered this upward movement. I had a knife in my hand.’

He added: ‘I saw the knife in my hand… I went to Becky… I shook her shoulder and said, “Becky”… there was blood on her face.’

Frybl said he fled with his dogs before collapsing in the snow. When he awoke, police were firing shots, killing one of his dogs.