British tourist is raped in Magaluf

By Tom Worden for MailOnline

A young British woman has been raped in the Spanish party resort of Magaluf – on the same day as two similar attacks on other victims.

The 21-year-old holidaymaker was sexually assaulted on Friday morning within an hour of a 20-year-old Swedish tourist.

The two women were attacked between the hours of 7.30am and 9am on the party isle.

A third woman, a German aged 30, was raped on the same day in the resort of El Arenal, 10 miles south east of the island’s capital Palma.

The 21-year-old holidaymaker was sexually assaulted on Friday morning in Magaluf, pictured, within an hour of a 20-year-old Swedish tourist (stock photo)

Spain’s National Police and the Civil Guard are investigating the three attacks, but it was not immediately clear if they were being linked.

The German woman told detectives she woke on the beach to find her dress unbuttoned and her underwear stained with blood. Her bag and purse were missing.

She said she had been in a bar talking to a man she met there, but did not remember leaving.

All three women were treated in the island’s Son Espases hospital.

Last month a 19-year-old Scottish woman told police she was raped by three men on a beach near Magaluf’s party strip, Punta Ballena. 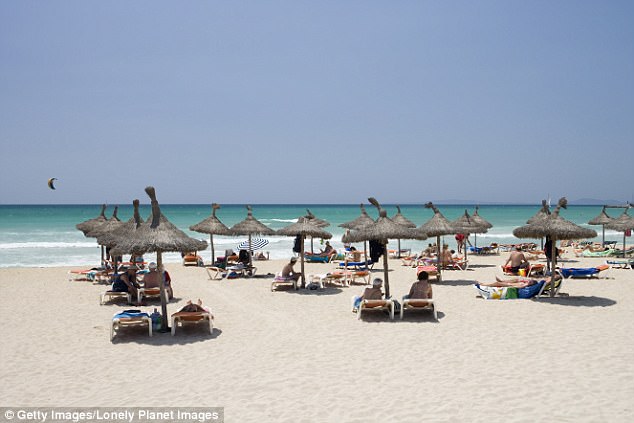 A third woman, a German aged 30, was raped on the same day in the resort of El Arenal, pictured – 10 miles south east of the island’s capital Palma (stock photo)

She gave officers a photograph of one of the three men. But she later said she did not want to take the matter further and did not give a formal statement.

Meanwhile police in the resort of Puerto Banus, on the Costa del Sol on the Spanish mainland, are still hunting for a taxi driver accused of raping another British holidaymaker last month.

She told police the driver forced himself on her after taking her to wasteland instead of to her hotel.