Families in Britain face paying 15 to 20 per cent more for a foreign holiday next year compared to pre-pandemic prices as demand surges, industry experts say.

Package holiday giant Tui admitted this month that ‘prices are higher than 2019’ with travellers now ‘generally booking longer and more five-star than four-star’.

It reported a 120 per cent rise in holidays sold for next year after taking 1.3million bookings from the UK and Europe – with 744,000 breaks for 2022 sold since May.

The past 18 months seen staycations surge among Britons put off from going abroad by rapidly-changing rules, costly PCR test prices and self-isolating requirements.

And with destinations still limited for Britons this year, the Kayak website has seen prices for international flights for Easter 2022 rise by around 20 per cent on 2019.

Kayak told MailOnline that although prices are up, overall flight searches for both domestic and international travel are still down by 77 per cent compared to 2019.

And a travel industry source told the Daily Mirror that ‘prices for next year are higher than in 2019’, adding the average rise for foreign trips could be 15 per cent.

Some experts warned the 15 per cent figure could be ‘quite optimistic’ while others suggested a rise could be caused ‘if more people are willing to travel next year’.

Martyn James, of online complaints service Resolver, said: ‘We all need a holiday but it will be more expensive. Prices are going to go up. I think 15 per cent could be quite optimistic.’

And Emma Coulthurst, an expert at the holiday price comparison website Travelsupermarket, told MailOnline today: ‘Prices are the lowest I’ve ever known them this summer.

She also told how TravelSupermarket’s research of its package holiday price comparison data on its website showed that holidays this summer are ‘between a quarter to as much as half the price of 2019/pre-pandemic’, adding: ‘These are unprecedented prices.’

Paul Charles, chief executive of travel consultancy The PC Agency, also told MailOnline: ”With inflation increasing, prices are naturally rising both for U.K. and overseas trips. But some trips will cost at least 10 per cent more as airlines and other providers seek to rebuild after the pandemic and strengthen their financial position. 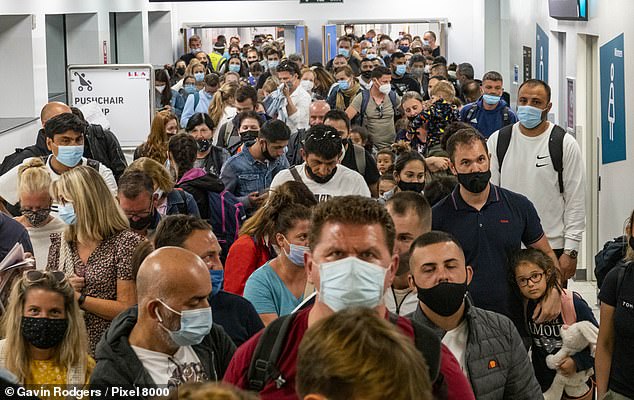 ‘The last thing consumers need is to see businesses failing so it’s vital that they shore up their finances and increase rates where relevant.

Cheaper and faster Covid test could be used at airports, say Birmingham scientists

A new potentially cheaper and quicker Covid test could be rolled out at airports in as little as three months, researchers have said.

The development, from scientists at the University of Birmingham, comes amid ongoing controversy about the expense of tests required for travellers coming to the UK.

PCR tests typically cost around £65 but some private clinics are charging around £200. Health Secretary Sajid Javid has acknowledged that the cost of PCR testing can be ‘a barrier’ to people wanting to travel and said consumers and families need to be protected from ‘exploitative practices’.

‘There are still many packages and flights which remain good value however, especially if booked well in advance as businesses would prefer cash in the bank now, and reward consumers with lower prices as a result.

‘The premium end of the market is rebounding quickly in some destinations, especially the Caribbean and parts of Europe, and recovering despite higher prices.

‘What’s clear is that there will be less choice over the next year as it will take time for airlines to rebuild their networks and for hotels to re-open. So prices overall will rise due to more demand for fewer destinations and packages.’

Next Monday, a new BBC Panorama documentary will investigate the boom in British staycations – saying that the basic cost of a holiday in the Lake District can be as much as three times more than one at Italy’s Lake Garda.

‘The Great British Staycation: Winners and Losers’, presenter by Mobeen Azhar, will also look at how the cost of some self-catered accommodation has risen by more than 40 per cent.

It comes as the competition watchdog insists it gave advice to Government officials about coronavirus travel testing in April, amid claims it has been too cautious in taking action.

Travel industry leaders expressed frustration last week when the Competition and Markets Authority (CMA) announced it would report its recommendations around testing ‘within the next month’ following a request by Health Secretary Sajid Javid. 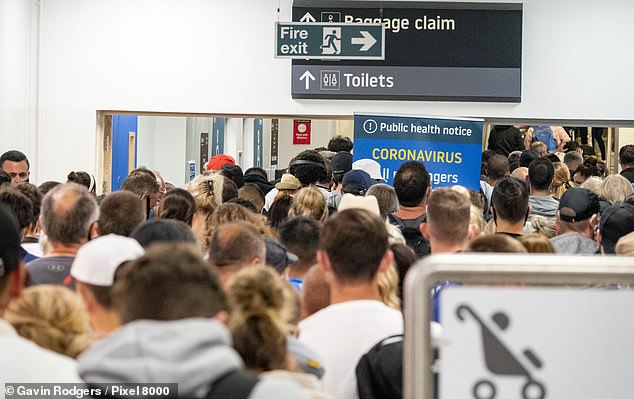 But a CMA spokesman said yesterday that the organisation ‘gave advice to DHSC (Department of Health and Social Care) officials about the PCR testing market in April and we gave further advice to the Secretary of State last week’.

Britain’s train passengers could be hit by the largest fares rise in a decade.

Increases are usually linked to the previous July’s Retail Prices Index (RPI) measure of inflation, which was confirmed as 3.8 per cent for July by the Office for National Statistics today.

No announcement has been made on what will happen to fares next year, but ticket prices in England and Wales rose by an average of around 2.6 per cent in March, representing RPI for July 2020 plus one percentage point.

The Scottish Government imposed smaller rises of 1.6 per cent and 0.6 per cent for peak and off-peak travel respectively.

A repeat of the policy in England and Wales next year would see fares rise by an average of 4.8 per cent, which would be the largest increase since 2012.

That would lead to hikes in the cost of annual season tickets such as:

Public transport fares in London are set to be hiked by 4.8 per cent in January, under the terms of the UK Government’s bailout of Transport for London which stated that RPI plus one percentage point must be used.

Rises in fares for mainline rail services across Britain are controlled by the UK, Scottish and Welsh governments.

Mr Charles from The PC Agency said that this is ‘further evidence’ that the Government has been ‘too slow in reducing the costs of testing, and dragging its feet on the untruths told by some providers’.

He continued: ‘The delay in dealing with cowboy operators, which continues to this day, is putting off people from travelling and hindering recovery among travel firms.’

Following its initial response to Mr Javid last week, the CMA said it was looking at whether there were any ‘immediate actions’ the Government can take.

It is understood that the watchdog first provided analysis to the DHSC in April and May about the potential risks arising from the rapid development of the coronavirus testing industry.

Options to address concerns over the price and reliability of tests and the quality of service from test providers have been sent to Mr Javid to consider.

Former CMA chairman Lord Tyrie accused the watchdog of being ‘too slow to react’. It ‘could and should have been better prepared’, he told the BBC.

Travellers arriving in the UK require one or two PCR tests, depending on where they have been and their vaccination status.

Some can take a third test for a shorter self-isolation period.

Tests must be bought from providers listed on a Government website.

Some firms advertise prices as low as £19, but many holidaymakers have complained it is impossible to book tests that cheap.

There has also been frustration over delays in receiving tests and results, and overflowing drop-off boxes.

Mr Javid has acknowledged that the cost of PCR testing can be ‘a barrier’ to people wanting to travel and said consumers and families need to be protected from ‘exploitative practices’.

He has ordered his department to urgently review the list of private providers on gov.uk to ensure pricing is clearer and transparent.

Where have countries been placed on the green, amber and red lists?

The UK Government has rated every foreign country as red, amber or green for coronavirus, which impact the rules you must follow to enter England: