British WAGs kick back with cocktails in Qatar

The WAGs of England and Wales’ World Cup squads are clearly enjoying their time in Qatar, sunbathing and enjoying a cocktail or two between matches.

The partners of British footballers touched down in Doha to support the Three Lions ahead of their 6-2 win against Iran on Monday – and the Welsh squad’s 1-1 draw with the US.

But away from the stadium, the WAGs shared photographs of themselves relaxing in hotels and waterparks – soaking up 26C days while the UK welcomes a grisly winter.

The England WAGs are staying on a luxury £1billion cruise liner, dubbed a ‘floating palace’ comes complete with six swimming pools, 30 bars and the tallest slide on a ship, while their Welsh counterparts are being housed in a hotel.

It comes amid reports that England’s footballers are isolating from their partners in order to prevent any possible spread of Covid-19, meaning the WAGs cannot visit the players’ hotel ten miles away in the Al Wakra resort,

Jodie Francis, the fiancee of Wales player Chris Mepham, shared a glam photograph of herself relaxing by the pool in Qatar a chic all-black ensemble 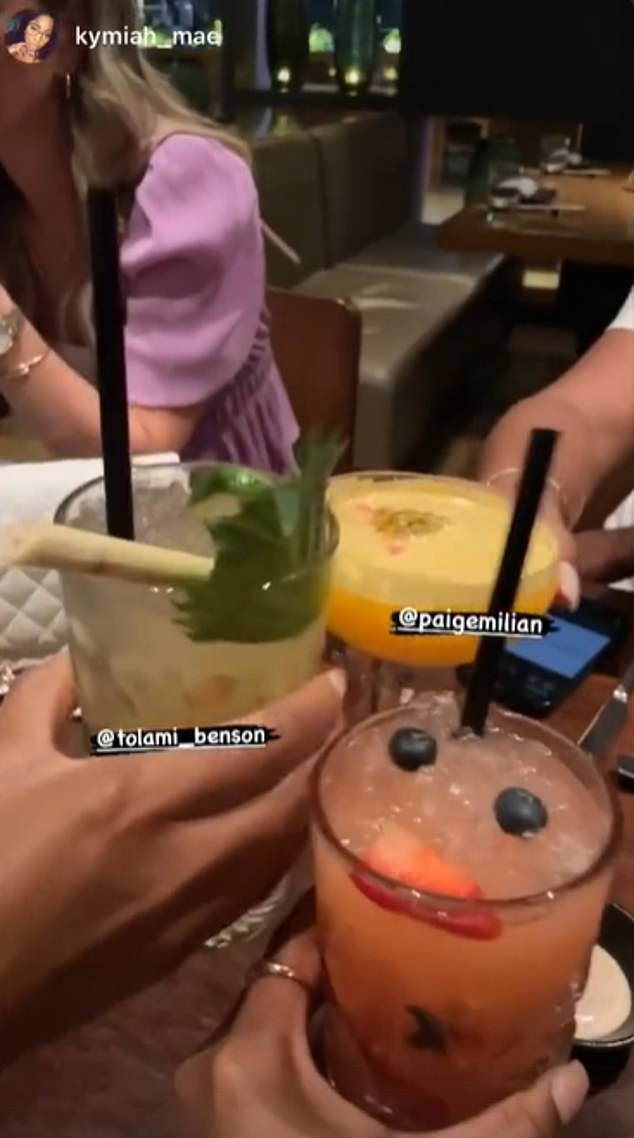 In Qatar, alcohol is largely only served in hotel restaurants and bars that have licenses. It is illegal to consume it anywhere else. However, non-Muslim residents of Doha who have a booze license can drink at home.

Paige also shared a photograph of a huge waterslide on Instagram, saying: ‘Me and Mel are in our element.’ This likely refers to Sterling’s 10-year-old daughter, Melody Rose.

Meanwhile, Jodie Francis, the fiancee of Wales player Chris Mepham, shared a glam photograph of herself relaxing by the pool in a chic all-black ensemble.

Amie Coady, 29, the wife of England’s Conor Coady, has also shared social media snaps of her time in Qatar, panning the glorious view from her hotel room this morning. 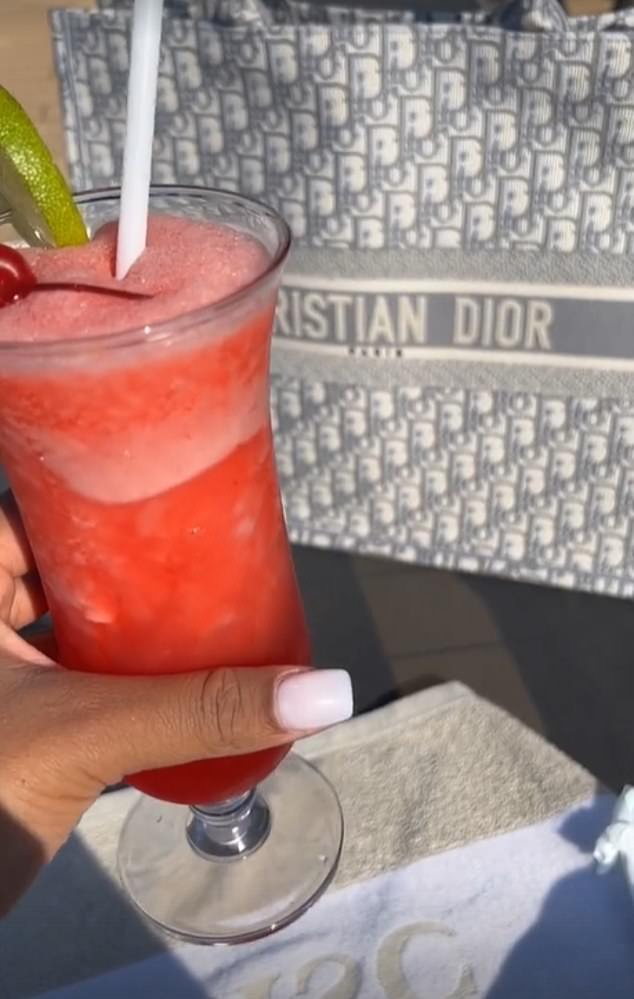 Away from the stadium, the WAGs shared photographs of themselves relaxing in hotels and waterparks – soaking up 26C days while the UK welcomes a grisly winter 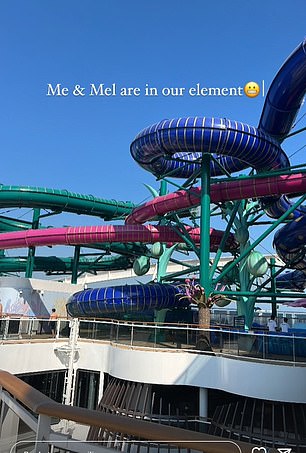 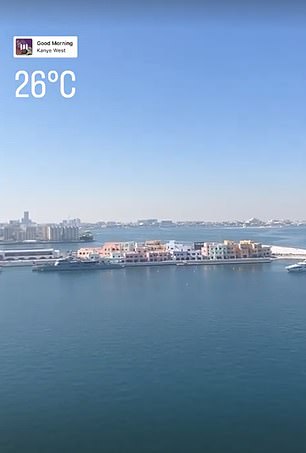 Paige also shared a photograph of a huge slide on Instagram, saying: ‘Me and Mel are in our element.’ The cruise ship the WAGs are staying on boasts the longest dry-slide at sea titled The Venom Drop (left). The WAGs are enjoying 26C heat in Qatar, while the UK shivers in winter (right) 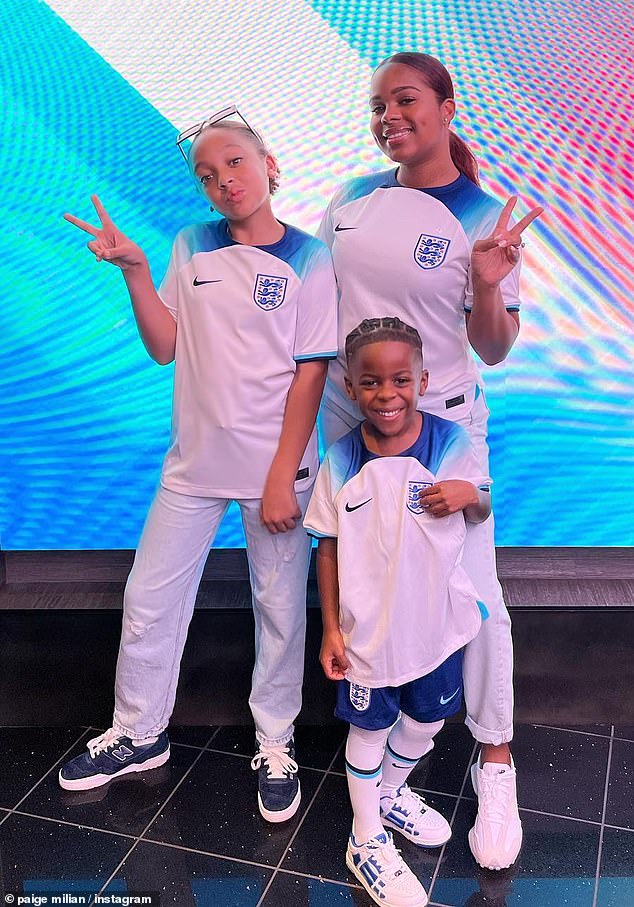 Raheem Stirling’s fiancée Paige Milian, 27, shared some sweet family snaps as she celebrated her partner’s success with the England team after they won 6-2 against Iran on Monday

It comes after it was reported that many British WAGs had turned to professional stylists to help them curate a wardrobe for the tournament, which takes place in a strict Islamic nation.

Skimpy tops and short skirts are reportedly banned from stadiums – but the wives and girlfriends of players were permitted to wear football shirts during games. 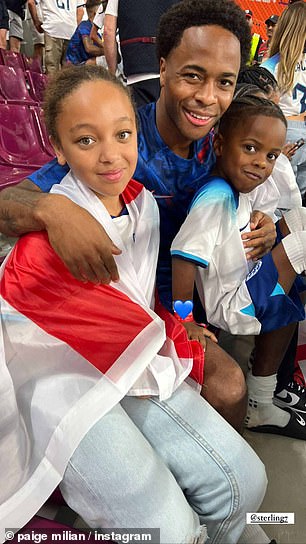 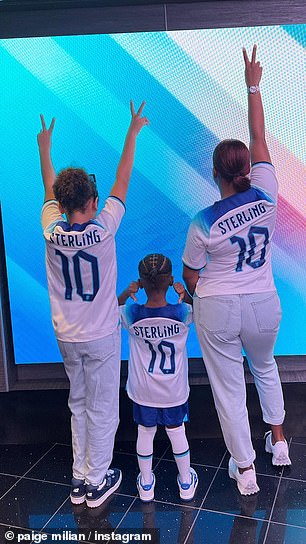 Raheem with his children in the stands at the Khalifa International Stadium in Doha, Qatar, pictured left. Pictured right: Paige posed with the son she shares with Raheem, Thiago, five, and his daughter from his relationship with his ex-girlfriend Melissa Clarke, Melody Rose, 10 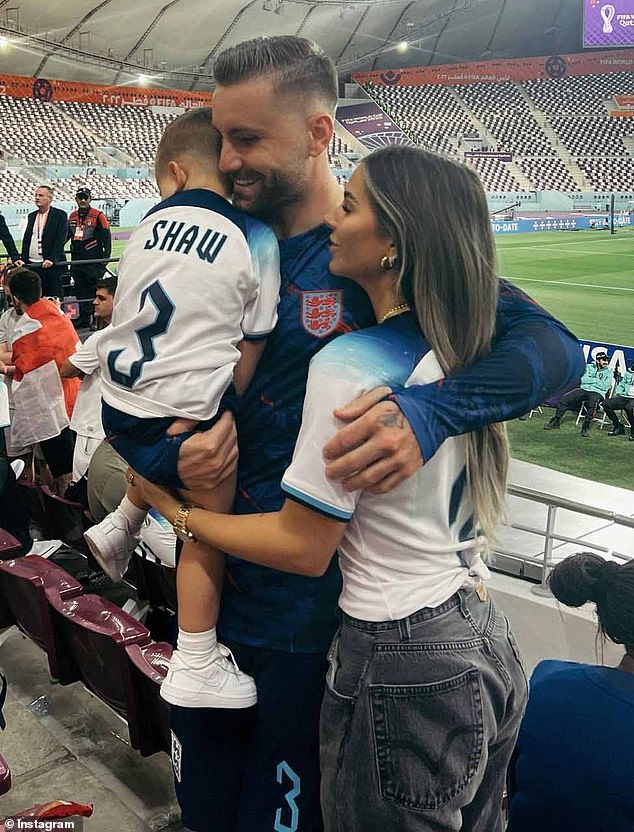 Anouska Santos shared this photograph to Instagram with her partner Luke Shaw and their son, captioning it: ‘Three years of you baby reign, you make our whole world go round’ 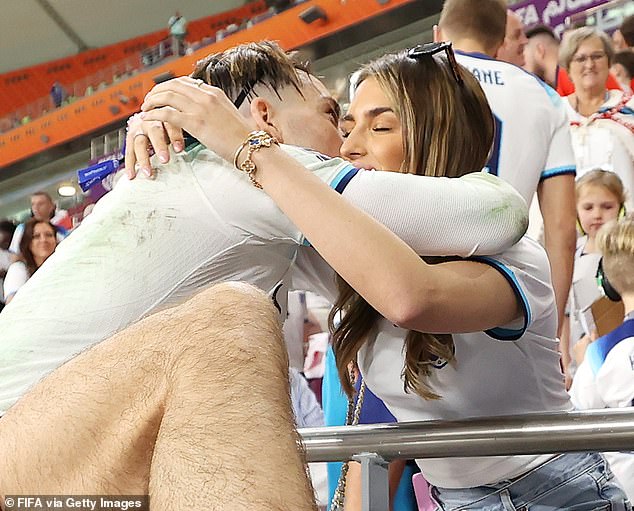 Sharing the love! Jack Grealish and his girlfriend Sasha Attwood celebrate with a cuddle after his side’s victory this afternoon 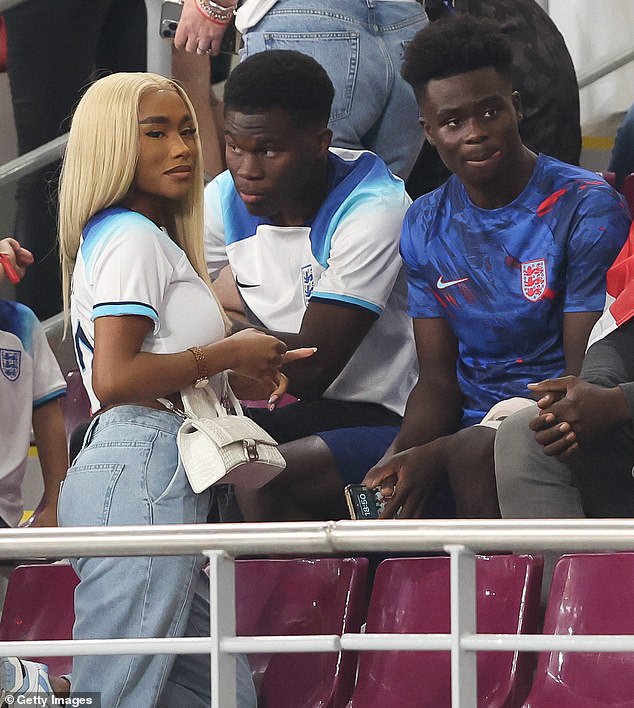 Bukayo Saka sits with his family – including his girlfriend Tolami Benson, 22 – after scoring two goals throughout the match 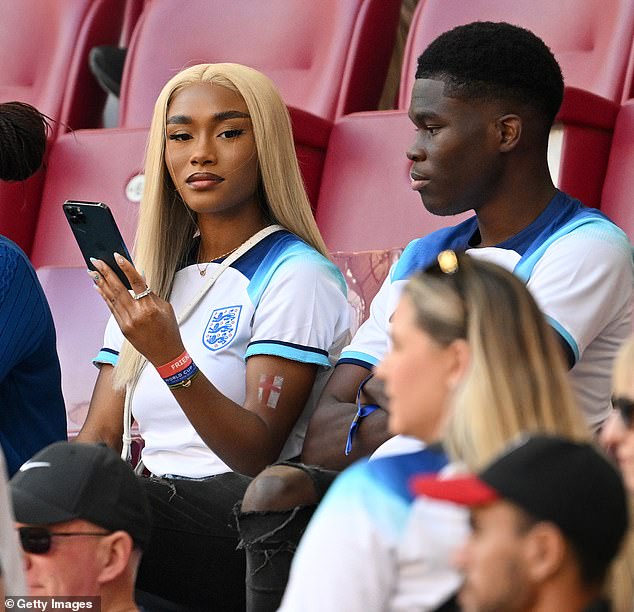 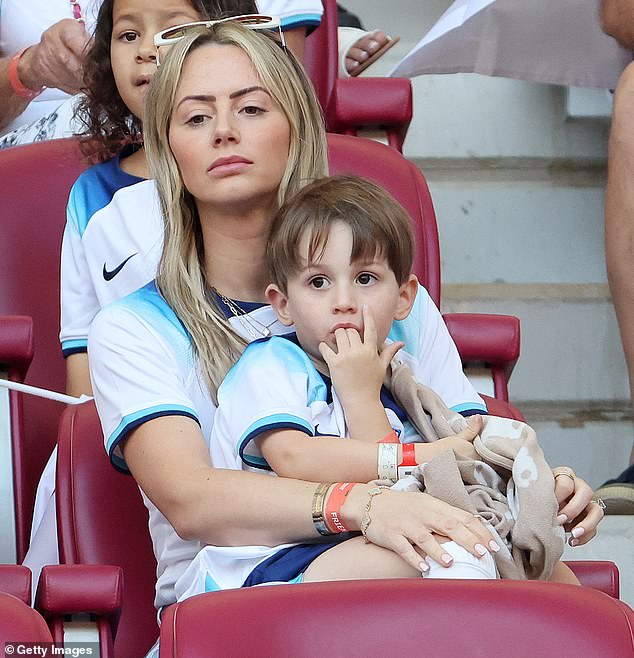 Amie Coady, who is married to Everton player Conor, appeared in deep concentration when at Monday’s event in Qatar

Meanwhile, model Paige, 27, could be seen in Instagram snaps flicking a victory sign as she wore the new Three Lions jersey while standing with the son she shares with Raheem, Thiago, five, and his daughter from his relationship with his ex-girlfriend Melissa Clarke, Melody Rose, 10.

Following their game, the England squad rushed to celebrate with their loved ones in the stands; Grealish was pictured sharing a cuddle with his girlfriend to celebrate the win, while captain Harry was seen hugging his children after the match.

His youngsters were just some of the squad’s mini supporters seen filling up the stand today, with Phil Foden’s son in attendance at the match, alongside Harry Maguire’s daughters, who sported shirts with their father’s name emblazoned on the back.

‘No WAGs for a week’: England players are told they must stay in their hotel ‘bubble’ to avoid Covid until after the group games – with wives and girlfriends on HMS WAG cruise ship ten miles away

England’s footballers are isolating from their partners during the World Cup in Qatar in order to prevent any possible spread of Covid-19, it has been reported.

Around a dozen wives and girlfriends have spent recent days on a cruise ship in Doha – ten miles away from the England team’s hotel in Al Wakra resort, where they celebrated their latest World Cup victory.

The ‘bubble’ rule has apparently been insisted upon by manager Gareth Southgate until the last group match is concluded next Tuesday, The Times reports.

The only respite came on Monday following England’s 6-2 win against Iran, when players walked over to their families in the stand.

Grealish has praised England’s management for doing their best to make them comfortable throughout their stay in Qatar, with family photographs and players’ favourite aftershaves placed in their hotel rooms.

Arsenal goalkeeper Aaron Ramsdale, 24, said: ‘It’s lovely what the FA and the team behind the team have done for us.

‘We have got a basketball net up which gets played on a lot. There is a big screen around for movies or I’m A Celeb and things like this if the lads are up at that time, and big tents where massages are.’

Ramsdale’s fiancee Georgina Irwin posted a picture on Instagram of the view from her room at the MSC Europa.

England’s demolition of Iran 6-2 in their opening match of the Qatar World Cup on Monday was their strongest ever start to a major tournament – marking a record-breaking afternoon for the Three Lions.

The rout began when Birmingham-born Borussia Dortmund wonderkid Bellingham, 19, sent thousands of fans in the stadium wild – and millions at home – as he rose to nod home after a cross from Manchester United’s Luke Shaw. He made history with the header as he became the second teenager in history to score in a World Cup for England, after Michael Owen against Argentina in 1998.

Minutes later Saka, 21, smashed home a left foot shot off the crossbar. And then Sterling, 27, blasted in a volley following a cross from captain Harry Kane, effectively winning the game before half time.

In the second half Saka then grabbed a fourth goal – his second – with an hour on the clock, passing it into the net after a mazy run. He became the youngest England player to score two at a World Cup.

Gareth Southgate’s side would not be able to boast a clean sheet however, Iran striker Mehdi Taremi pegged back England with a fierce strike past Pickford.

Marcus Rashford scored and restored a four goal advantage to make it 5-1. Jack Grealish then made it 6-1 with a minute to go, doing ‘the worm’ as a celebration after a promise to a 11-year-old Manchester City fan with cerebral palsy. Jack’s sister also has the condition.

Pickford made a superb stop from Sardar Azmoun in the latter stages of 10 minutes of injury time before Iran were awarded a penalty after a VAR check. John Stones was adjudged to have pulled the shirt of Taremi, who then sent Pickford the wrong way to reduce the arrears to 6-2 with the last kick of the game.

The Three Lions could have had at least eight goals. They were denied a clear penalty just three minutes into the game, when Harry Maguire was clearly dragged down in the box. Maguire later headed against the crossbar.

Thousands of Three Lions supporters were in the stadium including the WAGs of the players and David Beckham while millions are watching at home, work or in pubs with high streets across the UK deserted as people settled down for the 1pm match. There were wild scenes at pubs and fanparks across the UK as England thrashed the Iranians.

But the game was overshadowed by the row with FIFA over Harry Kane’s proposed rainbow armband and ticket woes for fans trying to get into the stadium after the Qatar 2022 app failed.