Paedophile Kori Ellis, 42, was the key witness against Sarah Gotham,(pictured in 2014) 34, who was found guilty of six charges of sexual assault of a child under 13

A British paedophile has been brought to justice after an American sex offender gave evidence against her in court.

Paedophile Kori Ellis, 42, was the key prosecution witness against Sarah Gotham, 34, who was found guilty of six charges of sexual assault of a child under 13.

Gotham and co-accused Craig Forbes, 36, who earlier pleaded guilty, drugged then sexually abused a girl while streaming their assaults live to a watching Ellis in the US.

They indecently touched the youngster in front of a webcam sending images to Ellis in California over Skype, Plymouth Crown Court heard.

In what is thought to be a legal first, four FBI officers flew to the UK to give evidence in a British court in person.

Four agents flew in to give evidence from the witness box, coming from San Francisco, Washington, Detroit and San Diego.

The trial was held amid tight security with a ticket system and no publicity to avoid attracting vigilantes.

Those with a genuine interest in the case were allowed to attend but had to surrender their mobile phones in case someone was tempted to take a photograph.

After a six-week trial, heavily-tattooed Gotham showed no emotion on Wednesday when she was unanimously found guilty of all six charges.

The retail sales assistant from Plymouth had denied the charges, saying she was not the ‘Sarah’ identified by Ellis – who called their innocent victim ‘Sleeping Beauty’.

The company director has previously been jailed for 20 months for five counts of making or downloading indecent movies of children.

Judge Ian Lawrie QC jailed Gotham for nine years and passed an extended sentence on Forbes, meaning he will serve at least two thirds of an eight-year sentence before he can be released.

He will spend another eight years on licence.

Forbes, described by the judge as an ‘arch-manipulator’ of both men and women, appeared in court via videolink from Exeter prison. 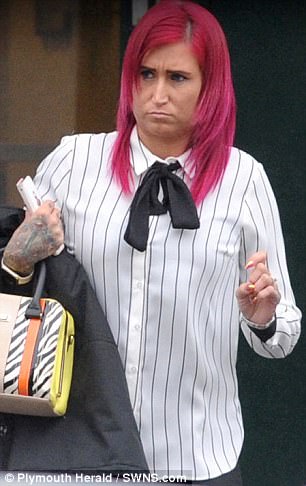 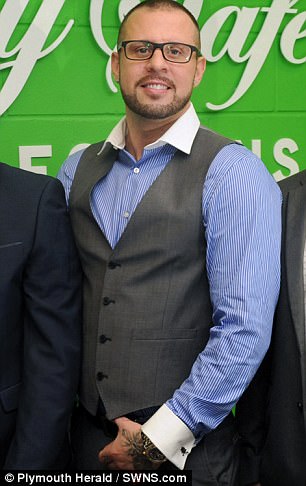 Gotham(left, outside court) and co-accused Craig Forbes, 36,(right, in 2015) who earlier pleaded guilty, drugged then sexually abused a girl while streaming their assaults live to a watching Ellis in the US

Reporting restrictions had been placed on the trial, lifted only once the pair had been sentenced.

Passing sentence, the judge said Forbes had held a ‘malign and corrupting influence’ over Gotham.

‘He is manipulative, devious and is unquestionably interested in child pornography and from everything I have read and heard a clear and constant threat to children,’ he said.

‘I get the impression that this was a relationship in which she came under his spell. I find he is a manipulative character and that he has a manipulative way about him.

‘I can’t fathom why he has a hold over women but he appears to and it is a corrupting influence.’

Both were placed on the sex offenders’ register for life and made subject of sexual harm prevention orders until further notice.

Kannan Siva, prosecuting, had earlier told the court: ‘The Crown’s case is that Miss Gotham was more than a spectator or a passenger. She was a participant.

‘The verdict of the jury is that not only did Sarah Gotham play a pivotal part in the planning but also the sexual abuse of that child.’

Nicholas Lewin, defending Gotham, said the offences happened as a result of Forbes’s influence and branded him the ‘vilest of predatory paedophiles’.

‘He has proven to be a cancer on women,’ he said.

‘They were undoubtedly influenced by his interests and drawn into things they would not have done had he not infested them. 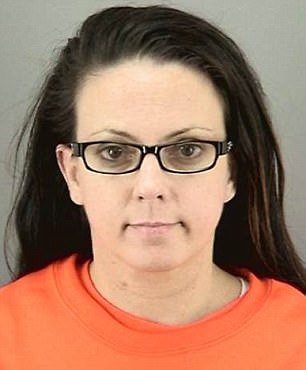 The pair indecently touched the youngster in front of a webcam sending images to Ellis(pictured) in California over Skype, Plymouth Crown Court heard

‘I can only invite Your Honour to conclude that the person that pushed her over the boundary was Forbes.

‘This was a short period of abhorrent behaviour rather than some deep seated opportunity.

‘What seems to be the situation is that she fell under his spell. She has been drinking too much.

‘He has manipulated her to behave in a way she had not behaved before or is ever likely to again.’

The court heard that following a previous prison sentence, Forbes claimed to have found God, but after his release quickly reoffended.

Kevin Hopper, defending Forbes, said: ‘He knows he is going to receive a large custodial sentence.

‘He did what was right in this case, he did plead guilty.’

The court heard Ellis, who was arrested in San Francisco in April 2015, immediately confessed that she was a paedophile and agreed to co-operate with officers in return for a reduction in sentence.

She said she had watched a man and a woman in the UK sexually abusing a girl on Skype and identified the two defendants as being responsible.

Ellis was caught when the FBI and police raided her flat in San Francisco in April 2015 – and Gotham and Forbes were unmasked.

She immediately confessed being a paedophile and agreed to co-operate with officers in return for a reduction in sentence. 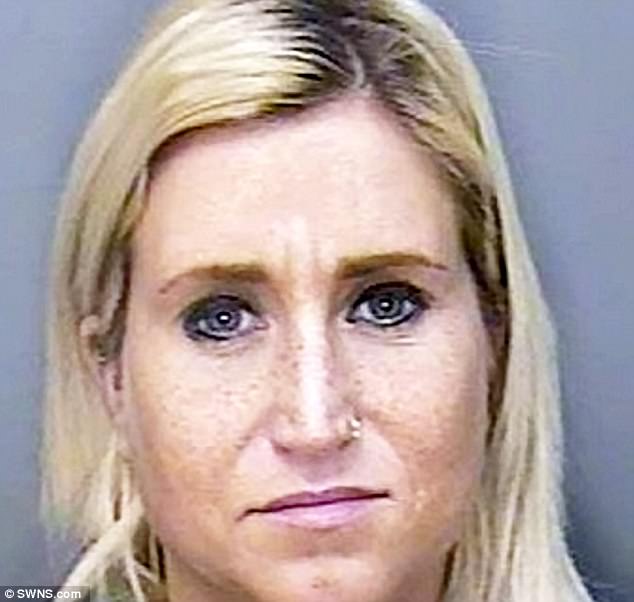 Judge Ian Lawrie QC jailed Gotham(pictured) for nine years and passed an extended sentence on Forbes, meaning he will serve at least two thirds of an eight-year sentence before he can be released

‘After I got arrested I felt bad about what I did and I feel I should make sure that other kids don’t get hurt,’ she said.

Ellis, a crystal meth user, had contacted the defendants through a ‘chat roulette’ site called Omegle by entering the word ‘paedo’ or ‘paedophile’ in the area of shared interest. They then swapped Skype details.

‘It matched me with this stream in the UK. We started chatting – that was Craig and Sarah,’ she said.

‘They were sitting on a couch in the living room. They were both clothed. Sarah was Caucasian. She had blonde straight hair. It wasn’t short but it wasn’t really long.

‘I don’t think we traded child pornography but we might have at some point in the future. The conversation wasn’t very long.

‘We talked about child pornography and we exchanged Skype information.’

Less than a month later, they arranged to chat.

‘I was excited about meeting them. They were an attractive couple that was into child pornography,’ she said.

They would type messages and chat on the webcam and Ellis said Gotham and Forbes, who were sexual partners, drugged the girl to abuse her, which she watched.

‘I would have my microphone on because they wanted me to say what I wanted them to do. Their microphone was on so I could hear what was going on from there,’ she said.

Ellis said both Forbes and Gotham had foot fetishes and asked her to paint her toenails in front of the webcam.

About a month later Ellis said Gotham messaged her to say she was alone with the girl and began abusing her. 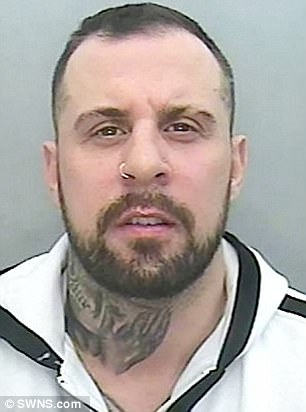 Forbes, described by the judge as an ‘arch-manipulator’ of both men and women, appeared in court via videolink from Exeter prison

‘It was bright in the room for me to see clearly what was happening,’ she said.

As well as Ellis’s evidence, prosecutors also relied upon chatlogs recovered from computers, which was described as ’64 pages of filth and extreme depravity’.

‘While Forbes admitted what he had done, Gotham has acted completely without remorse and has always claimed that she had nothing to do with it.

‘Her defence, which the jury saw through, was that the woman on the live stream was someone else calling themselves Sarah and using her Skype account.

‘Forbes is clearly a very dangerous sex offender. However hard we find it as a society to believe that females can enter into such actions for their own enjoyment, the fact of the matter is that there is no excusing that both Gotham and Ellis are paedophiles who acted purely for their own pleasure.

‘Ellis was very open from the start. She gave an extraordinary account about her behaviour and what had happened with Gotham and Forbes.

‘It is unusual for a paedophile to be so frank; she was a compelling witness although her evidence was clearly distasteful, and at times harrowing for the jury to listen to in court.’

Addressing Forbes, the judge said: ‘The reality is that the only mitigation for you is that you pleaded guilty. There is certainly no sign of any regret or remorse for the consequences of your actions.

‘Sarah Gotham was a woman held in high regard by her employers and you corrupted her.

‘It is striking that even though you had a sexual harm prevention order you broke it quickly after its inception.

‘It is clear there is little that can stop you when you wish to commit sex offences. I do take the view that you are a dangerous man and you present a constant and persistent danger to women and children.’

The judge told Gotham: ‘On many levels it is painful to have to sentence you to a period of custody because it is clear that until your late 20s you led a hard-working life.

‘You cannot sidestep the fact you played an equal part in the pursuit of Mr Forbes’s interests.

‘You fell under the corrupting influence of Mr Forbes. But that does not excuse your responsibility for the offences.

‘I am sure the consequences of the sentence you receive today is clearly a very painful lesson.’

An NSPCC spokeswoman said: ‘This is a disturbing case in which Gotham and Forbes horrifically abused a child and broadcast the awful footage for another paedophile to view.

‘Their twisted actions involved drugging their vulnerable victim and anyone following this trial will have been deeply affected by the evidence heard.

‘The war on vile online abuse is only just beginning and any website or app that allows paedophiles to contact one another is a huge cause for concern.

‘These crimes fuel the demand for more children to suffer through the creation of indecent images and videos which are made available online.’