Britney Spears and fiancé Sam Asghari were ready for the warm weather in Southern California on Wednesday.

The musical artist, 40, and actor-fitness professional, 28, dressed in light ensembles Wednesday as they were seen grabbing lunch at the Four Seasons Hotel in Westlake Village, California.

The …Baby One More Time singer was clad in a black T-shirt and magenta shorts with grey trainers with orange laces, donning black sunglasses with white frames and earrings.

The latest: Britney Spears, 40, and fiancé Sam Asghari, 28, were ready for the warm weather in Southern California on Wednesday as they were seen grabbing lunch at the Four Seasons Hotel in Westlake Village, California

The Grammy-winner, whose conservatorship was ended last November, carried a brown leather purse and a black umbrella, with her blonde locks pulled back.

Asghari wore a black T-shirt with black shorts and black Adidas trainers, sporting a beard on the daytime outing.

The Oops!… I Did It Again vocalist has a huge following of 39.9 million followers on Instagram, where she gives her fans a candid look at her life and passions.

Spears made headlines Tuesday with a post she later took down in saying she didn’t know who Pete Davidson and Scott Disick were. 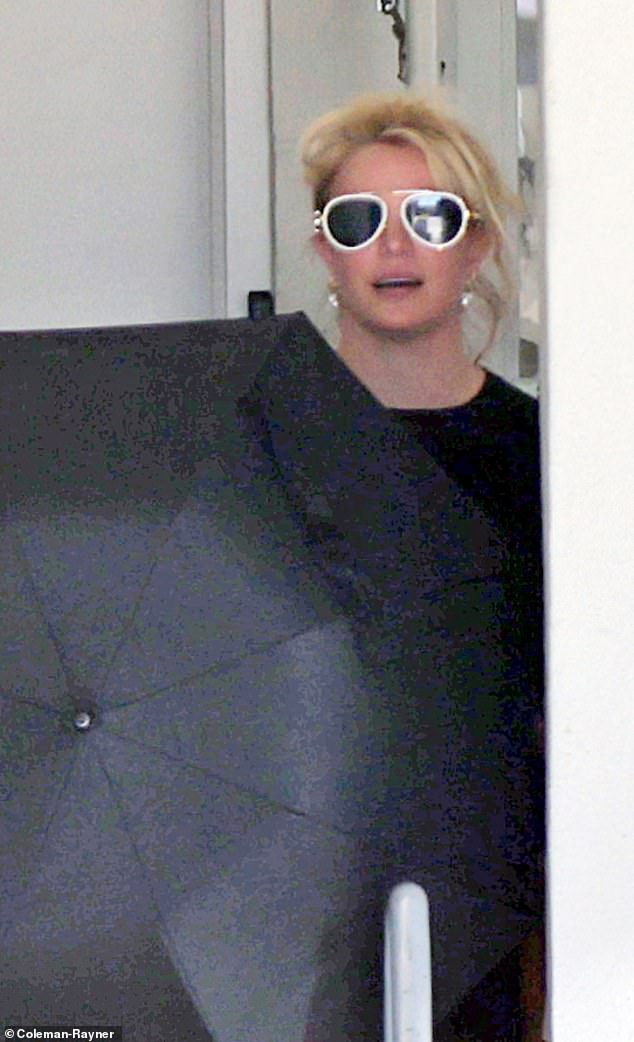 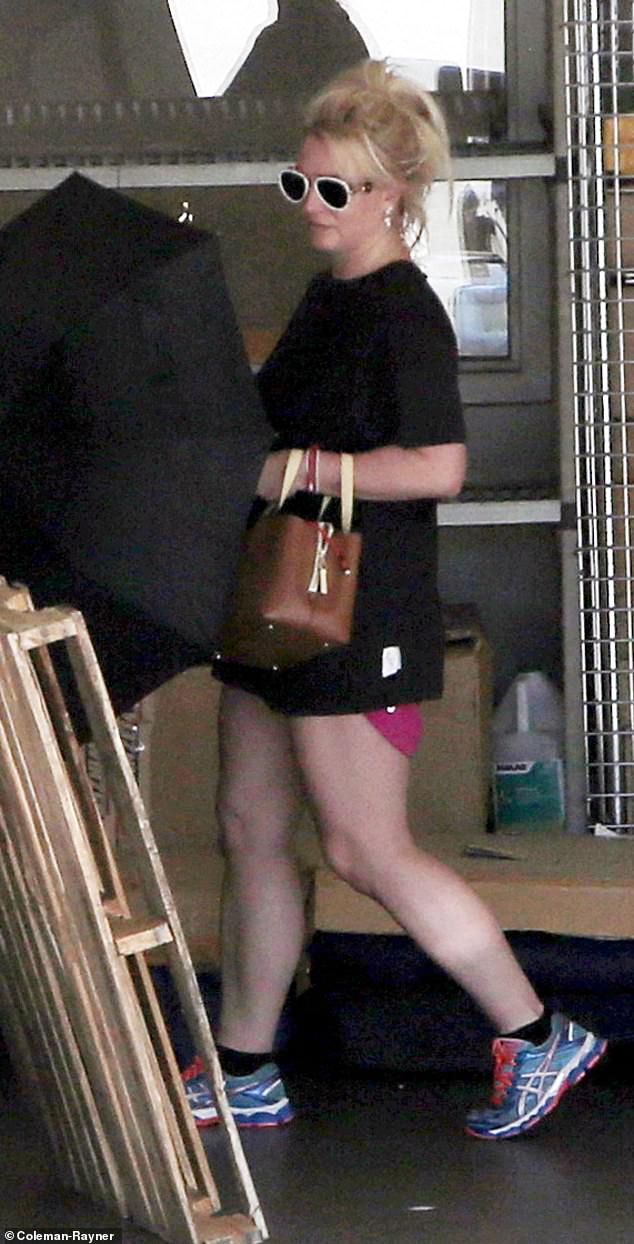 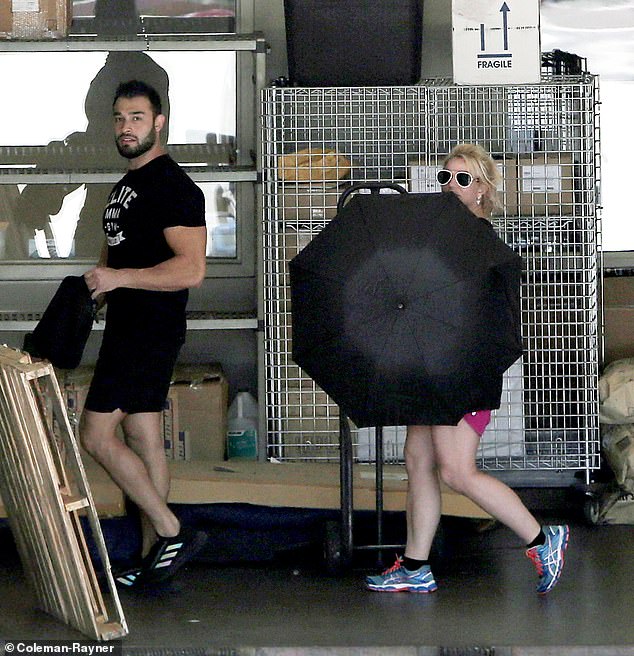 She reposted an Instagram Stories clip of the SNL star, 28, and ex of Kourtney Kardashian, 38, as they were watching the film The King of Comedy, and Disick had fallen asleep. Davidson, who has been dating Kim Kardashian since October, captioned the shot, ‘Boyz night was wild.’

The …Baby One More Time singer captioned her repost of the shot, ‘Sorry had to repost this … no idea who these people in the video are but it made me laugh so hard!!!!’

Spears also on Tuesday opened up about the joy she feels from her eight-month-old puppy Sawyer, who she obtained last month during a vacation to Hawaii with Asghari. 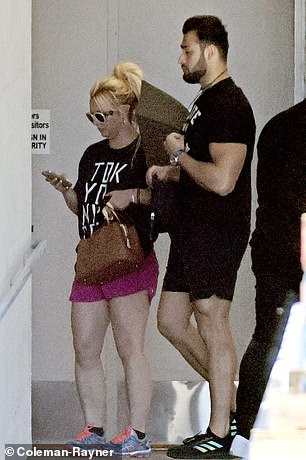 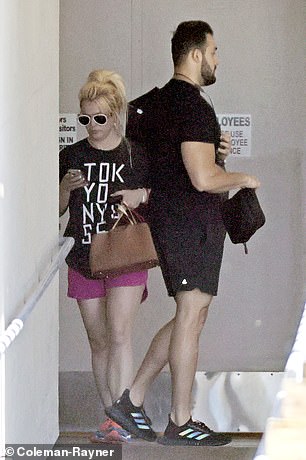 Spears checked her phone on the weekday outing alongside her beau 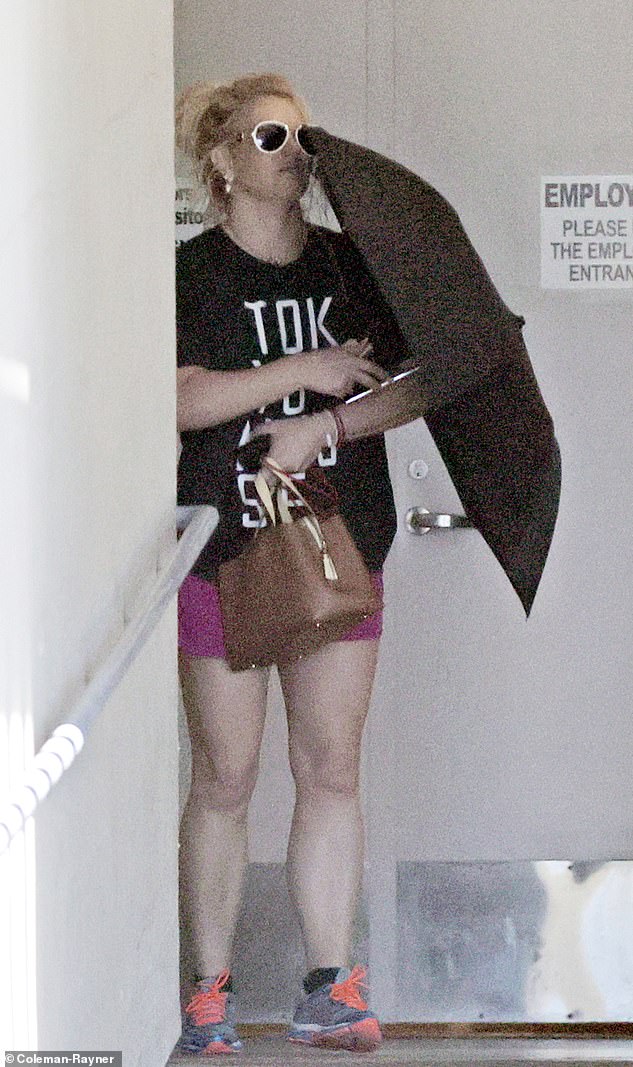 The singer opened her umbrella amid temperatures that approached 90 degrees

Asghari wore a black T-shirt with black shorts and black Adidas trainers, sporting a beard on the daytime outing

‘Thank you for dogs!!!’ she said. ‘Dog spelled backwards is God … not sure any correlation but I do think that dogs are extraordinary animals!!!’

The Womanizer artist said of her new pet, ‘I found Sawyer in Maui, a gift from God!!! Literally!!! He held me so tight when I held him that I literally couldn’t leave the place.’

Spears said that while she’s ‘pretty ruined when it comes to trusting people,’ she has complete faith in her new pet.

‘Sawyer made me feel more loved in 9 seconds than I’ve ever been with. No bulls***, no words!!! Pure genius protection because of 1 thing … HE LOVES ME!!!’ she wrote.