After making no secret of her distaste for her family on social media, Britney Spears now wants to get coffee with her mother Lynne Spears.

Spears, who has long complained of not being able to have coffee or alcohol under her previous conservatorship, invited her mother, 67, out for a brew on Instagram on Tuesday.

‘After no coffee for 15 years… Mom we can go have coffee together now !!! I’m treated as an equal … let’s have coffee and talk about it !!!’ Spears, 41, posted to her account, along with a cropped photo of her body taken in Mexico.

‘Let’s have coffee and talk about it’: Britney Spears now wants to get coffee with her mother Lynne Spears

The full post read: ‘Instagram doesn’t like posts of people revealing their bodies anymore so here’s a selfie of me in Mexico !!! Mom and Dad … I crossed the border and I made it !!! After no coffee for 15 years… Mom we can go have coffee together now !!! I’m treated as an equal … let’s have coffee and talk about it !!!’

Whether or not Spears was being sarcastic or sincere in her invite remains to be seen.

It comes several months after Spears accused her mother of hiding coffee from her every morning.

‘Did you also tell people how you hid coffee every single morning ??? Did you tell them every morning when I would try to find coffee,’ Britney posted on Instagram, according to Page Six. 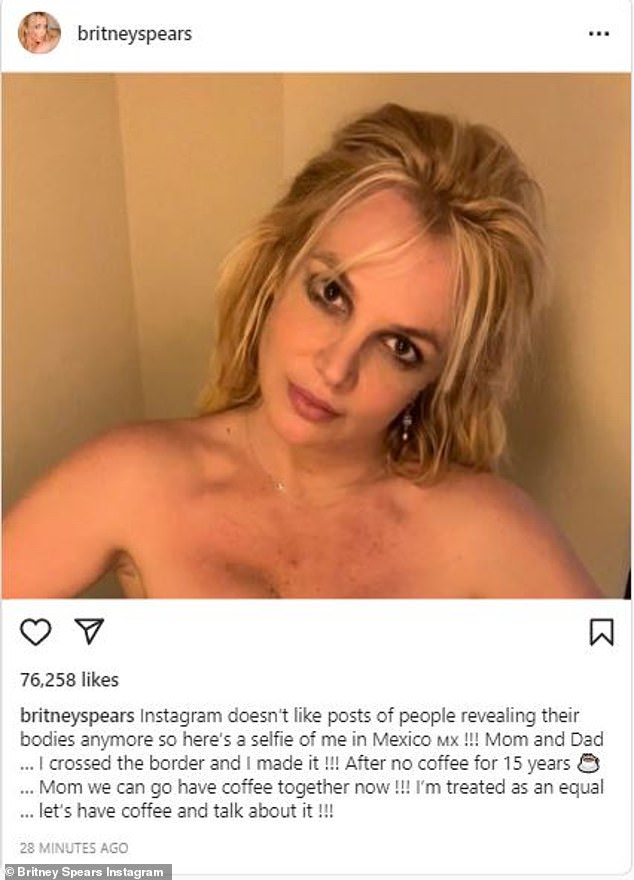 The full post read: ‘Instagram doesn’t like posts of people revealing their bodies anymore so here’s a selfie of me in Mexico !!! Mom and Dad … I crossed the border and I made it !!! After no coffee for 15 years… Mom we can go have coffee together now !!! I’m treated as an equal … let’s have coffee and talk about it !!!’

The Spears family drama has been unfolding publicly on social media ever since Britney was freed of her conservatorship.

Earlier this year, Britney slammed her mother after she apologized for all the pain inflicted upon her.

‘I’m sooo sorry for your pain!’ Lynne wrote. ‘I have been sorry for years! I love you so much and miss you! Please unblock me so I can speak to you in person! Britney, deep down you know how much I love and miss you! I apologize for anything and everything that’s hurt you!”

Britney eventually responded with: ‘Mom take your apology and go f*** yourself!!!’ 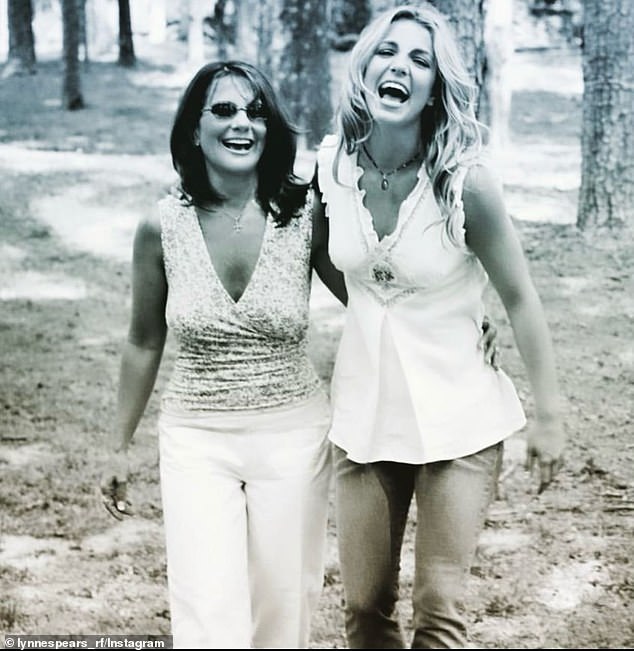 Family feud: The Spears family drama has been unfolding publicly on social media ever since Britney was freed of her conservatorship

The latest post comes after Britney cleared up a mystery that perplexed many of her fans and reignited conspiracy theories that claim she is not in charge of her social media accounts, with many fans even believing she could be dead.

On Tuesday, the pop superstar posted several semi-nude photos and videos of herself that she said were taken in Mexico, despite claiming last week that she was flying to New York.

But sources told TMZ that the songstress made up her New York trip to throw off her fans and photographers that might have tried to tail her, even though the deception made some fans speculate that she was incapacitated, or even dead.

A since-deleted semi-nude video of Britney in the shower shared shortly after announcing the fake trip last week was reportedly taken while in Mexico, and Britney’s newest posts that she described as being from Mexico seem to show the same shower. 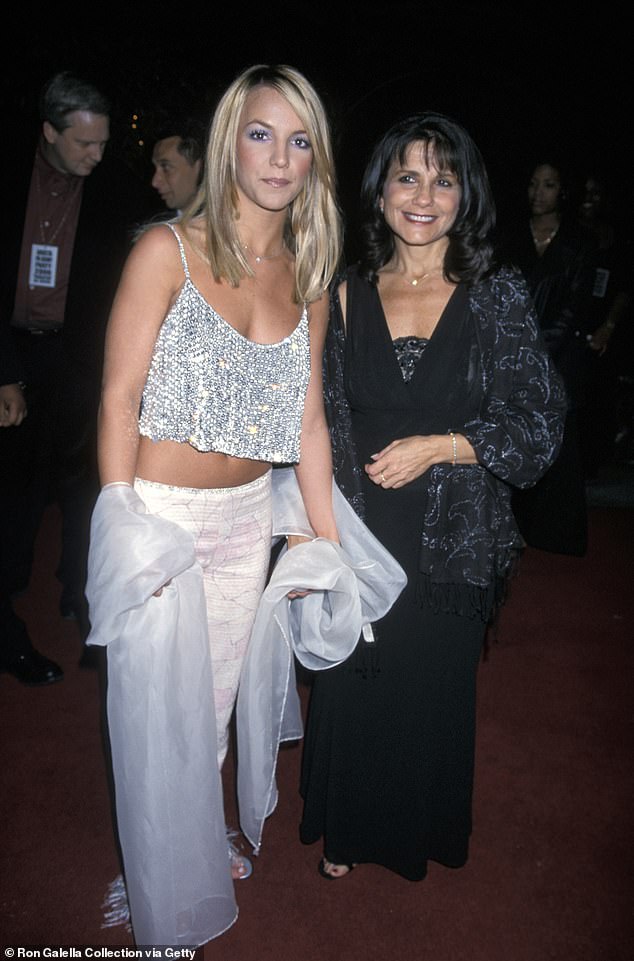 Throwback: Spears with her mother Lynne in 2000

The fan theories that Britney hasn’t been posting her own Instagram material appear to have arisen from fans who couldn’t believe the erratic nature of her posts, though they are not a major departure from her behavior in recent months.

But the phantom trip to New York also seemed to have concerned some followers.

On December 13, Britney posted a short video of herself inside of a private jet, along with a cute clip of herself embracing her husband Sam Asghari.

She seemed particularly hyperactive in the video and played around in the plane’s bed while kicking her legs out. 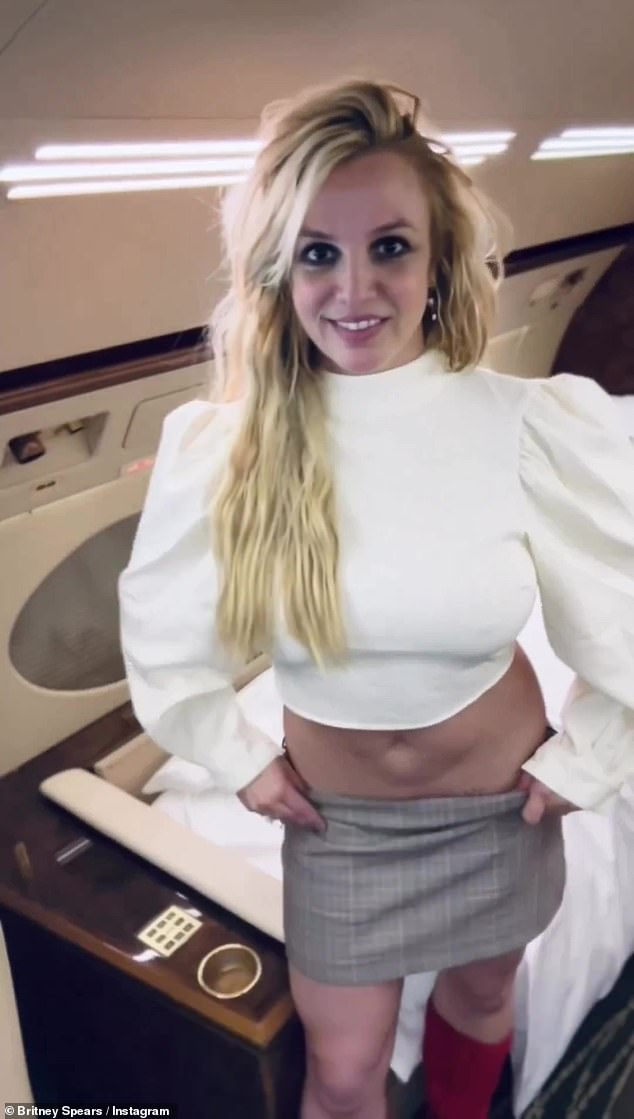 Doesn’t add up: Fans speculated that Britney wasn’t the one posting after she said she was going to New York, but never posted photos and was never spotted there by the paparazzi

But the trip wasn’t out east to New York, but down south to Mexico, according to the publication and her subsequent Instagram posts.

Fans got concerned that her posts that she attributed to Mexico were just older material after she claimed she was flying to New York.

A lack of any paparazzi photos of the hitmaker in the Big Apple also worried fans. 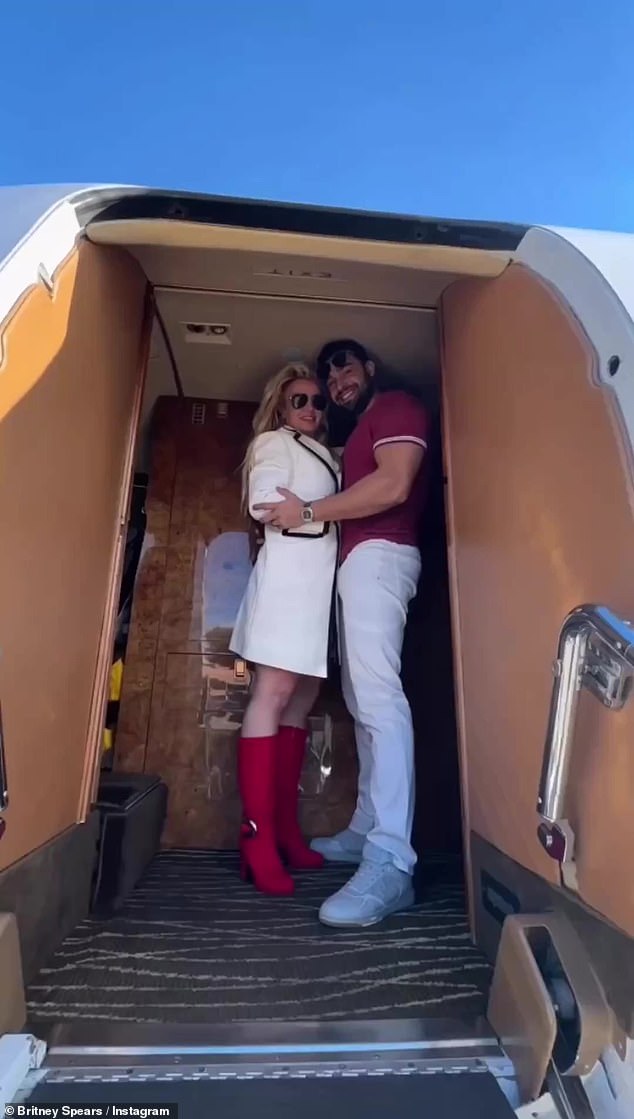 Tricky: But sources told TMZ that Britney lied about the trip to throw off her fans and followers, and instead she and Sam flew to Mexico for a vacation

But sources told TMZ that the trip to New York was all a sham, and she and Sam were always planning on going to Mexico for some fun in the sun.

They also claimed that the earlier shower videos that followed the jet post were shot south of the border, rather than being reposted from an older trip.

Another element that confused some of Britney’s most conspiratorial fans was the presence of her parents Lynne and Jamie Spears, 70, both of whom traveled to Los Angeles last week.

However, they weren’t visiting for an emergency, or anything related to Britney. Instead, the two were reportedly in town to support the daughter of Britney’s brother Bryan Spears.

They were supporting her by watching a Christmas production of The Nutcracker that she was performing in. 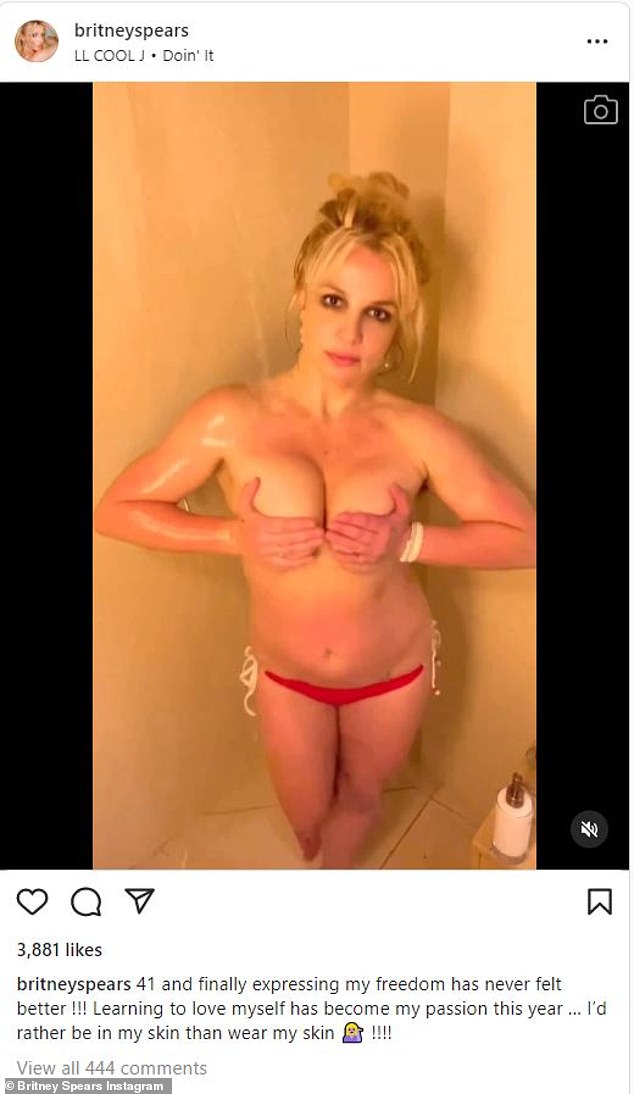 Cleared up: Subsequent shower videos from last week were newly shot from Mexico, not reposted content like some fans theorized