Britons are among the most depressed in the Western world

People in the UK are among the most depressed in the developed world as they grapple with problems such as job dissatisfaction, according to new international rankings.

Greater proportions of men and women report suffering from the debilitating condition compared to many other nations.

The UK is ranked joint seventh out of 25 countries for adults reporting they have depression – more than double the rates in countries including Poland, Italy, Greece and the Slovak Republic.

The data from the Organisation for Economic Co-operation and Development (OECD) also shows that women are more likely than men to report having the condition – a trend reflected across other countries.

Depression levels also vary according to the level of education achieved, with those going on to higher education reporting lower rates than adults who left school at 16.

The OECD analysed data for 25 to 64-year-olds from European health interview survey results and other national surveys across the world.

It found that ten per cent of this age group in the UK suffered from depression in 2014 – two percentage points above the average for other countries with available data.

Just four per cent of people from the Czech Republic, Greece, Poland, Italy and the Slovak Republic reported depressive illnesses. The country with the highest levels was Iceland, at 14 per cent.

In the UK, depression rates ranged from 15 per cent for those who left school after sitting GCSEs (12 per cent on average across other countries) to seven per cent for university-level educated adults (six per cent country average).

Eleven per cent of women in the UK reported suffering from depression compared to eight per cent of men. The average across countries was ten per cent and six per cent respectively.

Andreas Schleicher, director of education and skills at the OECD, said there are ‘good reasons to believe that education has a direct effect’ on reported depression levels. 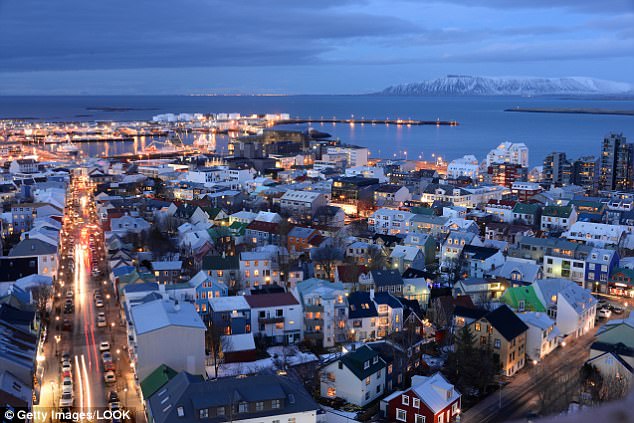 The country with the highest levels of depression is Iceland, at 14 per cent. Pictured: Reykjavik

He said: ‘With higher levels of education you just have so many more ways to participate in society.

‘The risk of social exclusion is just much higher for people who don’t have the kind of skills.

He added that the relationship between ‘almost all social outcomes and education is stronger in the UK than the average across countries’.

Depression is is largely treated by restoring feel-good chemicals in the brain.

Last year the NHS issued 64.7 million prescriptions for antidepressants, double the amount given out a decade ago.

But it was revealed last week that the condition could be treated with anti-inflammatory drugs after scientists determined that it is a physical illness caused by a faulty immune system.

An overactive immune system triggers inflammation throughout the entire body, sparking feelings of hopelessness, unhappiness and fatigue, according to Professor Ed Bullmore, head of the psychiatry department at Cambridge University.

He told a briefing in London: ‘In relation to mood, beyond unreasonable doubt, there is a very robust association between inflammation and depressive symptoms.’

In 2015, it was revealed that children in England were amongst the unhappiest in the world, with widespread bullying causing huge damage to their wellbeing.

In an international comparison of youngsters’ happiness levels in 15 countries, the report from the Children’s Society, concluded that children were unhappier with their school experience than their peers in 11 other countries including Ethiopia and Algeria.

The study found that children in England were particularly dissatisfied with their appearances.

Girls came bottom in terms of their satisfaction with their appearance and self-confidence compared with their counterparts elsewhere, with the exception of South Korea.

But in May, experts questioned whether lessons in wellbeing were contributing to children’s unhappiness. They called for greater scrutiny of programmes amid fears some could be doing more harm than good.

Depression is a very common condition. We generally think it’s present in about ten per cent of the population at any one time

Dr Cosmo Hallström, from the Royal College of Psychiatrists

Dr Cosmo Hallström, from the Royal College of Psychiatrists, said: ‘Depression is a very common condition.

‘We generally think it’s present in about ten per cent of the population at any one time. It’s more common among people who are socially deprived.

‘If you’re poor and uneducated and you live on the top of a high rise, without a partner and you’ve got children to care for, unsupported and on no money, then you’re more likely to be depressed than if you have a good lifestyle, a supportive family relationship and good education. It goes with social adversity, social support.

‘It’s a pretty common condition, which is under recognised, under diagnosed and under treated.’

He added: ‘There’s a lot of it about. We need to get a grip on it and now’s not the time to be cutting back on NHS funding.’