Britons are HAPPIER since the historic EU referendum

Happiness and life satisfaction both increased in the year to March, according to the government’s official wellbeing ratings.

However, there has been a slight rise in anxiety levels amid uncertainty over Brexit and turbulent international events.

Happiness and life satisfaction both increased in the year to March, according to the government’s latest official wellbeing ratings

The Office for National Statistics said the findings could be ‘surprising’ to some, but pointed out that employment levels had been rising steadily and people were confident about their own finances.

The research found that the average life satisfaction rating reported by individuals in the year to March was 7.68 out of 10 – up from 7.67 in the year to December.

The proportion of people who gave themselves a nine or 10 score for satisfaction also recorded a sharper increase from 29.2 per cent to 30 per cent.

But there was no real change in the numbers reporting low satisfaction and happiness levels – indicating that the wider increase is being driven by already-happy people becoming even more delighted. 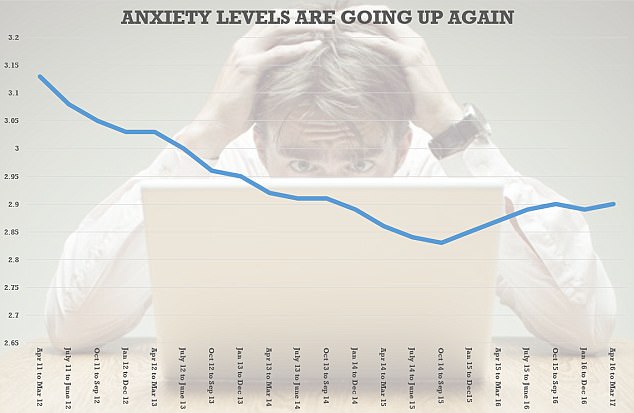 The rating for anxiety went up from 2.89 to 2.9 out of 10, perhaps in response to turbulent political situation in the UK and around the world

ONS spokesman Matthew Steel said: ‘Today’s figures may surprise some, showing a small increase in both reported happiness and life satisfaction during a period that has seen political change and uncertainty.

‘It’s worth noting that employment rates rose during the period covered by this report, and other ONS analysis showed people perceiving an improvement in their own financial situations and in the overall economy.

‘These are factors we believe may account for some people’s increased sense of personal well-being.’