Britons are still spending two or three days at home a week – despite the easing of lockdown measures, study shows

Britons are still staying at home for two to three days a week — despite the easing of lockdown, a study has found.

That is down from the average of four days when Number 10 imposed the draconian measures to curb the spread of coronavirus back in March.

The figures come from University College London’s Covid-19 social survey, which has quizzed 90,000 Brits throughout the pandemic.

When lockdown began on March 23, Brits were only allowed to go out for one daily exercise session or for an essential trip, such as purchasing food or medicine.

Covid restrictions have since been relaxed to allow unlimited exercise, non-essential outings and to meet up with friends or family. 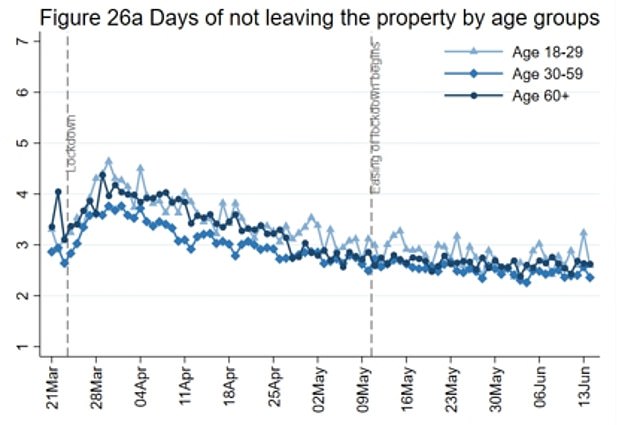 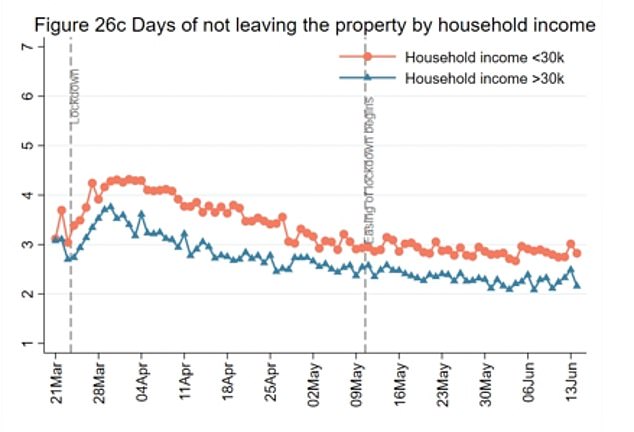 While Brits increasingly went out more days each week as the lockdown progressed, over the last two weeks this has plateaued.

Low earners and people with diagnosed mental health conditions are spending the most time in their homes, the study found.

This risks increased loneliness, anxiety and depression study, according to the study — which goes up to June 14 and was funded by the Nuffield Foundation.

Lead author Dr Daisy Fancourt suggested the results ‘could be in response to poorer weather, or continued worries about the virus’.

The study also found that worries about others, general anxiety and depression have remained stable over the past few weeks, despite measures being eased.

Levels of anxiety and depression have stopped falling and plateaued at a level below that experienced at the start of lockdown but higher than pre-lockdown levels. 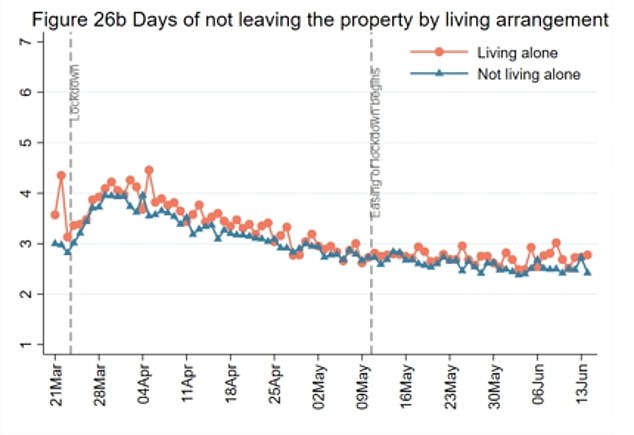 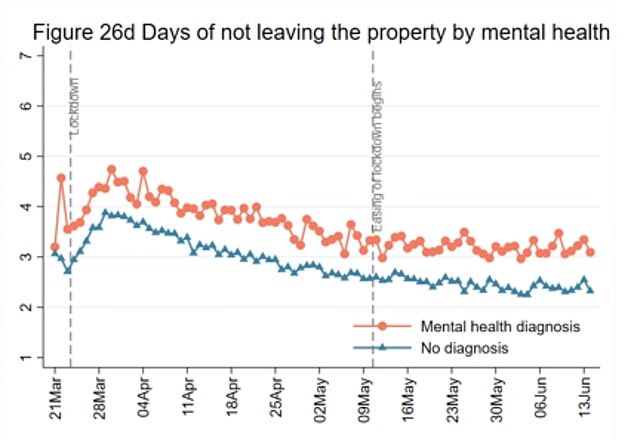 Similarly, life satisfaction and happiness levels have stopped increasing in the past two weeks.

It comes as a senior Tory said today that the two-metre rule and blanket quarantine for UK arrivals will be eased within weeks.

Sir Geoffrey Clifton-Brown, Treasurer of the powerful backbench 1922 committee, said Boris Johnson had been ‘probed’ on the issues at a meeting yesterday.

The body’s executive made clear that there was need for more ‘consultation’, after a string of U-turns and unrest over the coronavirus response.

Sir Geoffrey told BBC Radio 4’s Today programme that although there was no specific commitment from the PM he was ‘certain’ the social distancing restrictions and quarantine would be relaxed soon.

It is understood Mr Johnson told backbenchers he wants to ditch the two-metre rule but cannot unless extra safety procedures are introduced to keep his scientific advisers happy.

But he came under ‘a lot of pressure’ during a virtual 45-minute meeting with the delegation from the 1922.

The UK should not lift lockdown rules until the test and trace system is ready to cope with huge numbers of people, a World Health Organization director has warned.

Dr Hans Kluge, the WHO’s chief for Europe, said the Government must only take sure-footed steps and not rush into decisions like scrapping the two-metre social distancing rule.

He said test and trace must be ‘robust’ and ready for ‘aggressive’ use if the number of new cases starts to soar again.

Dr Kluge said: ‘The key words here are to do it gradually. Do it carefully.’

Britain is gradually returning to something of a normal way of life as restrictions on spending time outdoors, travelling across the country, and meeting up in small groups have all been lifted.

‘Non-essential’ shops, including clothes stores, will reopen for the first time today, and face coverings over the nose and mouth are now mandatory on public transport.

And Government ministers are coming under pressure to loosen the rule demanding that people stay 2m (6’6″) from others who they don’t live with. Scientific evidence suggests the majority of infectious droplets do not travel that far, but the Government is sticking to the measure as a precaution.