Britons back ‘air bridges’ and ‘travel bubbles’, with holiday searches to Italy and France rocketing

Britons back ‘air bridges’ and tourism in Europe ‘re-opening this summer’, with searches for July holidays to Italy and France rocketing in the past few days by over 100 per cent

British travellers are backing the idea of travel ‘corridors’ and ‘bubbles’, with searches for holidays to Italy and France rocketing this week.

Ministers are mulling coronavirus ‘air bridges’ to allow travellers to move between countries without the need for quarantine once the outbreak is under control. And Italy, Spain and Greece have all made headlines with announcements around the re-introduction of tourism.

Skyscanner has revealed that in response, searches from the UK for holidays in July in Italy are up 103 per cent this week compared to last week and for trips to France by 128 per cent. Overall searches for international travel in July have increased by 37 per cent in the past two weeks.

British travellers are backing the idea of travel ‘corridors’ and ‘bubbles’, with searches for holidays to Italy and France rocketing this week

Jon Thorne, director of user satisfaction at Skyscanner, said: ‘As they look ahead to the summer, nations around the world are discussing new travel alliances. These “travel bubbles”, also called “travel corridors”, aim to allow passage between two or more countries without the need to quarantine.

‘There has been much made in the news about which countries the UK might partner with in the future and at what time. As certain countries have been named, we have seen a correlation with an increase in search data to those locations, intimating that keen UK travellers will adapt their planned destination according to government regulations.

‘Safety, is of course, paramount in many people’s minds. Many travellers are taking advantage of the airlines and hotels who are offering their most flexible cancellation policies ever and booking international travel for later this year and early next.’

Transport Secretary Grant Shapps said a ‘blanket’ 14-day quarantine rule for arrivals in the UK would be introduced from next month. 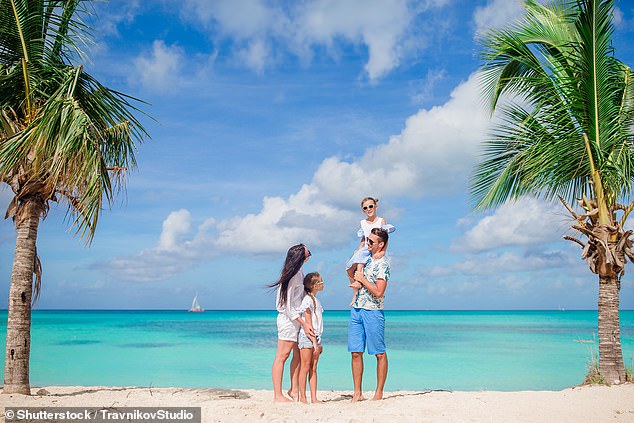 Searches for international travel overall in July has increased by 37 per cent in the past two weeks, says Skyscanner

WHAT IS AN AIR BRIDGE?

But he disclosed that there are ‘active discussions’ going on over what countries could be exempted from the regime in future, referring to the idea of ‘air bridges’ – usually used to refer to military flights over enemy territory.

Countries with lower infection levels, such as Australia, New Zealand and Greece, could potentially be excluded from the tough rules, which will be enforced by law.

Meanwhile, Skyscanner has also revealed that more people have been looking for getaways within the UK, encouraged by the easing of restrictions in some areas and the rumour of an extra Bank Holiday, which is being mulled as a way of boosting domestic spending.

For example, searches for car hire in the UK have increased 31 per cent week-on-week, with the travel website saying many people in cities are looking to escape to other parts of the UK after lockdown.

A survey of almost 6,000 Skyscanner users in 17 countries has shown that there is a latent demand in the UK for travel, with interest in domestic trips high.

Of those surveyed, 52 per cent believe that the domestic situation is getting better compared to a 65 per cent average across European countries.

Thirty-five per cent of participants said they believe that it will be safe to travel domestically within three months compared to a 29 per cent average across the European countries surveyed.