Brittany Higgins has shared her gratitude for the overwhelming support she received as she showed off the hundreds of letters on Christmas Day.

The former Liberal staffer posted a photo to Instagram on Sunday showing her and her boyfriend David Sharaz wearing matching Christmas jumpers and standing over a table piled with mail.

‘Merry Christmas! I’ve been so overwhelmed this morning after being inundated with letters of solidarity and support,’ she wrote.

‘Thank-you to everyone who wrote — expect a response in the post in the early new year!’

The show of support comes after a tumultuous year for Ms Higgins after her legal team abandoned its case against Bruce Lehrmann. 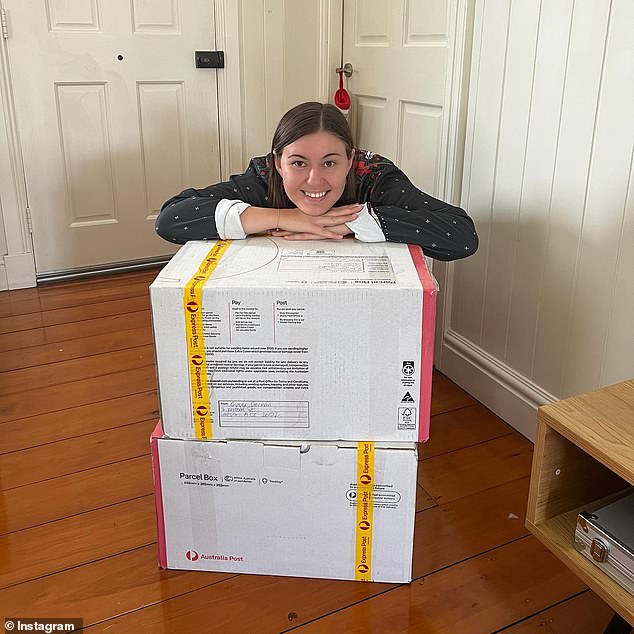 Lehrmann had been accused of raping Ms Higgins in 2019 – an allegation he has strongly denied.

The first trial was aborted over juror misconduct and the retrial was cancelled before it could take off over concerns for Ms Higgin’s mental health.

Ms Higgins thanked her supporters for the kind messages she received on Christmas Day with one photo showing her kneeling behind two Australia Post boxes with her body partially hidden by the enormous size of the parcels.

Another photo showed her close colleagues wearing disposable gloves as they sat around a conference table and sorted through the letters as a precaution.

‘Big shoutout to @gingereatspho (plus happy birthday) and the team at @giwlanu who organised and vetted each letter by hand,’ Ms Higgins wrote.

‘I’ll forever be grateful to you all. From my family to yours, sending lots of love and well wishes this festive season x’.

The former political staffer shared a photo of her acceptance letter on Thursday, writing: ‘Officially a Sydney University MBA student’.

Ms Higgins will study a Master of Business Administration at the University of Sydney, which takes about 18 months to complete when studied full-time.

She posted a series of photos from her graduation ceremony at Griffiths University on the Gold Coast last week, where she completed a double degree. 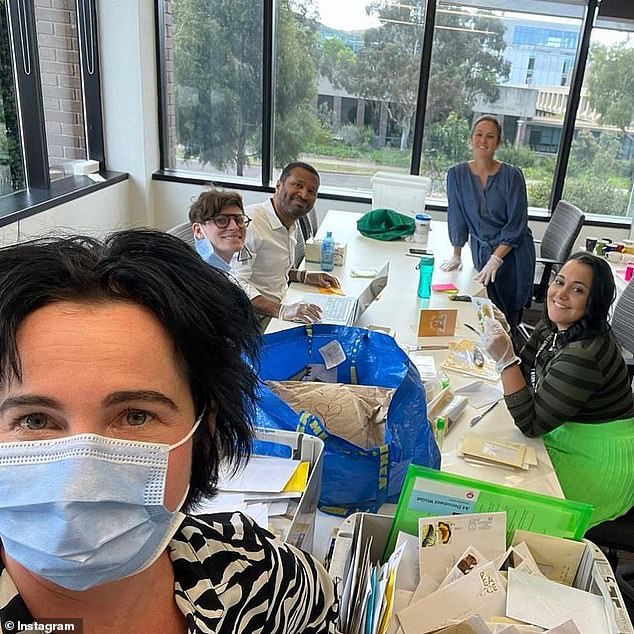 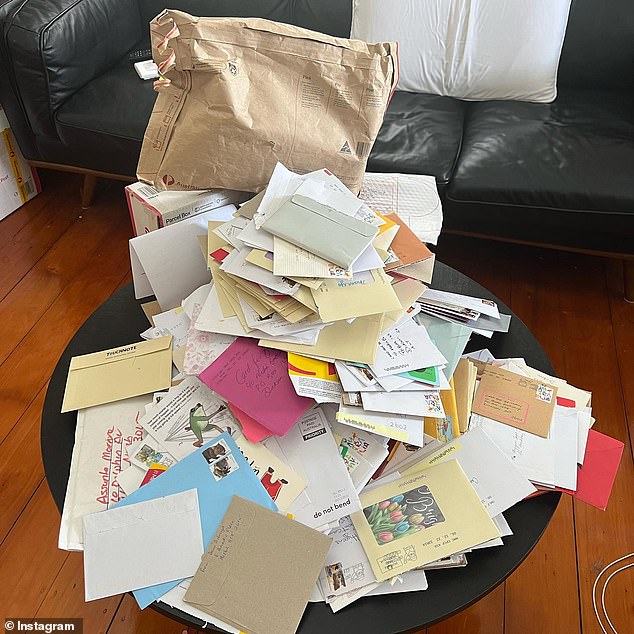 Ms Higgins said her university experience had been an ‘unconventional one’ and was congratulated by a series of high-profile Aussies, including Lisa Wilkinson.

Her announcement comes amid strong speculation former Australia Post CEO Christina Holgate is set to employ Ms Higgins in a role in her own team.

The women bonded over their torrid experiences within Scott Morrison’s government, with a source revealing they’ve not just ‘built a friendship’.

Toll Global Express, which has more than 8,000 employees is now one of Australia Post’s biggest competitors in parcel delivery.

However, a spokesperson for Ms Higgins insisted the pair were just friends, rather than prospective colleagues. 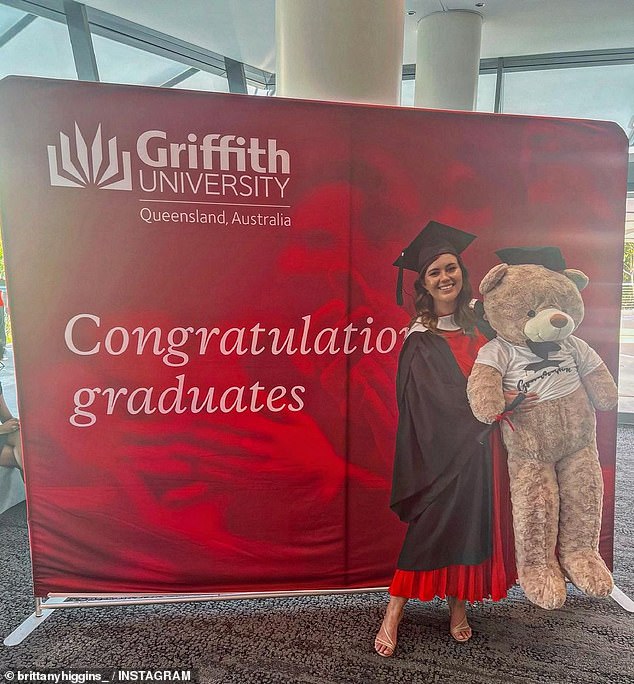 ‘She’s literally just come out of hospital,’ the spokeswoman said.

Her university graduation comes just days after Ms Higgins settled her claim against the Commonwealth, receiving a confidential payment after initially seeking about $3 million in damages.

‘At a mediation held today, the Commonwealth and Ms Higgins settled her claims,’ Ms Blumer said.

‘At the request of Ms Higgins, the parties have agreed that the terms of the settlement are confidential.’

Earlier in December, Ms Higgins’ civil action named three respondents in her action: Senators Linda Reynolds and Michaelia Cash as well as the Commonwealth. Senator Reynolds is since believed to have been removed from the claim. 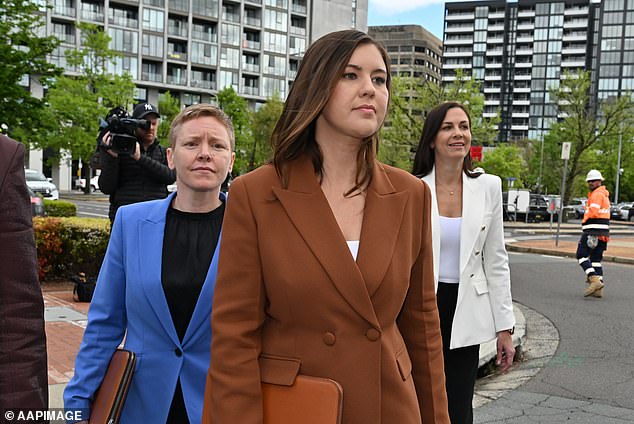 Ms Higgins (pictured at the ACT Supreme Court in October) alleges she was raped in 2019 by Bruce Lehrmann inside Senator Reynolds’ ministerial office, for whom they both worked as staffers

At the time, the claim was expected to be worth about $3 million, including $2.5 million for future economic loss, past economic loss approaching $100,000 and general damages of $100,000.

None of those figures were mentioned on Tuesday.

‘The parties welcome the fact of the settlement,’ Ms Blumer said.

Ms Higgins alleges she was raped in 2019 by Bruce Lehrmann inside Senator Reynolds’ ministerial office, for whom they both worked as staffers.

His trial in the ACT Supreme Court was derailed by juror misconduct.