Brittney Griner is back in the United States after an arduous 10-month saga in Russia. Yet nearly half of her WNBA peers opted to compete abroad this winter to supplement their incomes.

None are playing in Russia, for obvious reasons — Griner’s ordeal and the country’s ongoing war with Ukraine — but 67 of the league’s 144 players are in Australia, Turkey, Italy and about a half-dozen other countries.

‘Our players are going to do what’s best for them in consultation with their families and their agents,’ WNBA Commissioner Cathy Engelbert said. ‘And we’re certainly here to help them think through the security risks and things like that. I think you’re seeing players take advantage of other opportunities, and we’re certainly going to provide them more opportunities to do things with the league in the offseason and keep the momentum going around the great play that they put on the court every year.’

Griner, an All-Star with the Phoenix Mercury and a two-time Olympic gold medalist, was detained following her arrest at Moscow’s Sheremetyevo Airport in February on drug possession charges while returning to Russia to play for her overseas team. She was convicted and sentenced to nine years in prison in Russia before the US and Russia made a high-level prisoner exchange Thursday that allowed her to return home.

Griner has not spoken publicly nor announced her career plans since she was freed. But if she wanted to return to the court, she would be welcomed back by the WNBA, the Mercury and USA Basketball.

Engelbert said she’d give Griner and her family some space and time before any discussion about returning to the league, whose season begins May 19. South Carolina women’s basketball coach Dawn Staley, who coached Griner on the 2020 Olympic team, feels that playing again could be helpful to the dominant center.

Playing overseas brings in salaries for a handful of WNBA players that top $1 million. It’s a lucrative alternative to the marketing deals that the WNBA offers players to remain in the US during the offseason and promote the league; top players like Griner can now make $700,000 when factoring in all possible revenue streams offered by the WNBA.

But there’s no denying that the disparity in pay between professional men’s basketball players and professional women’s basketball players — Griner included — is still vast. The top salaries for WNBA players are much less than the minimum salary of about $953,000 for NBA players (excluding those on two-way contracts) for various reasons, primarily the difference in profit margins and media rights. 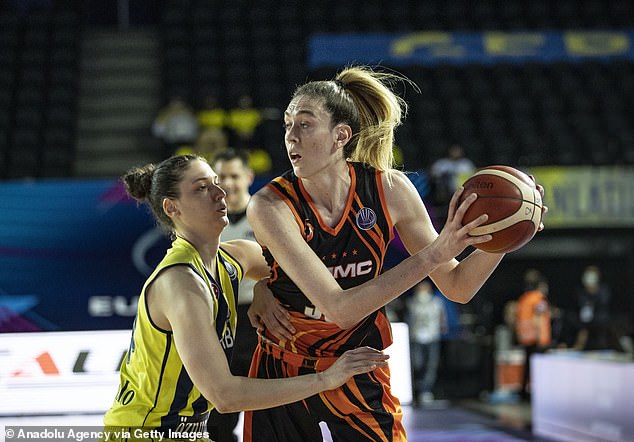 Breanna Stewart (right, playing for Ekaterinburg in 2021), who plays for the Seattle Storm, chose to play in Turkey because it was closer to her wife’s family in Spain. ‘You want to have a better lifestyle, a better off-the-court experience, and just continue to appreciate other countries,’ she told The Associated Press during the FIBA World Cup in September

The NBA’s revenues topped $10 billion for the first time last season, and the league has a $24 billion, nine-year television deal. Its next one, set to kick in around 2025, is expected to be worth significantly more. The WNBA does not publicly release its revenue numbers.

WNBA players have never asked to make the same as their NBA counterparts — they acknowledge it’s impossible — but have asked for an equal revenue share.

So, the WNBA players look outside of the US, and Turkey has become the main destination for this winter with nearly two dozen of them playing there. Top players can make a few hundred thousand dollars playing in Turkey — significantly less than what they could earn in Russia.

Breanna Stewart, who plays for the Seattle Storm, chose to play in Turkey because it was closer to her wife’s family in Spain.

‘You want to have a better lifestyle, a better off-the-court experience, and just continue to appreciate other countries,’ she told The Associated Press during the FIBA World Cup in September.

Last offseason, 73 WNBA players went overseas. Five years ago, it was about 90 players. The decline points to the growing options in the US, especially with the marketing agreements, which Englebert said tripled this year.

‘The owners really stepped up on the compensation side for the players in this collective bargaining cycle,’ Engelbert said at the WNBA Finals, ‘and I think the kind of quid pro quo for that was prioritization, showing up on time for our season.’

Players also can take part in the Athletes Unlimited league, which started last year in the US. The five-week season has 13 WNBA players signed for this year, up from two during the league’s inaugural year.