Broadband prices rise: Here’s how to get a cheaper deal

Millions of households will pay more for their broadband this month with four major telecoms providers hiking prices.

The average bill will increase £3.03 per month, the equivalent of £36.39 per year, according to Compare the Market, with the collective cost estimated to be nearly a billion pounds.

The average price of broadband for 24m people is going to increase by £3.03 per month or the equivalent of £36.39 per year

Almost four in five households have not switched provider in more than a year according to Compare the Market and those that do switch, often stick with one of the big four.

Its research shows that they take 81 per cent of all switches within the market.

Customer inertia is also helping the big broadband providers and switching is also likely to be a concern for many in the current pandemic, with those working from home worrying about a disruption to service.

More than one third of non-switchers admit to never having changed provider in their lifetime and almost a fifth consider it too much hassle to do so.

‘We know that many are “switched off” about switching in the broadband market, which is how providers make their money,’ said Holly Niblett, senior product manager, at Compare the Market.

‘But when one provider moves to increase its prices, the rest usually follow.’

How can people beat the price hikes?

Switching broadband company is often the best option – or at least getting a cheaper quote elsewhere to then haggle with your current provider.

If a provider hikes prices that were not included as part of the contract then a customer has 30 days in which they can cancel and change provider.

Under new rules introduced by Ofcom, internet providers need to make customers aware of any future price changes in the contract when they sign up.

For example, last year BT introduced new terms and conditions, which tied customers to an annual price rise, meaning its customers are unable to walk away during their contract.

But if prices are increased beyond what was agreed at the outset, customers will still have 30 days to cancel without incurring early exit charges.

‘People don’t need to swallow the cost,’ said Niblett, ‘usually, you can exit your contract early without a charge up to 30 days of being notified of a price increase.

‘Using a comparison site, you can also compare packages to make sure you’re getting a deal with the right speed at a price that works for you.

‘Often providers will offer new customers the best deals in an attempt to lure them in, so it’s worth seeing if you can switch and save significant amounts in the process.’

However, if you would prefer to stay with your current provider, rather than switch, it is still possible to haggle on the price.

‘Run a quick comparison, and then speak to your provider, letting them know that you have found a better deal elsewhere,’ said Nick Baker, broadband expert at Uswitch.

‘You will often find that your broadband provider will be quite willing to reduce the cost of their service, if you’ve taken the initiative to find a deal elsewhere.’ 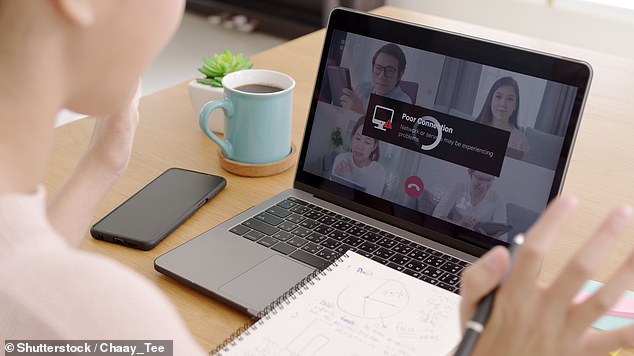 96 per cent of UK households can get super-fast broadband, but only about 60 per cent of people have taken up the option of these faster speeds according to Ofcom.

Has your contract already ended?

If your initial contract of 12, 18 or 24 months has already ended, you will be able to switch as and when you please without any financial penalty.

Under Ofcom rules, broadband providers should also notify customers when a contract is ending and state what their price will be rising to thereafter.

More than 20million customers are out of their initial contract period, according to Ofcom, with many of these paying a lot more for their broadband than they need to.

On average, broadband deals go up by around £9 a month when the initial offer period comes to an end, according to Uswitch.

‘Typically, consumers can save over £100 a year by switching their broadband, when their deal comes to an end,’ said Baker.

Will switching disrupt my connection?

Whether or not you will face any disruption will depend on which provider you are with and who you are switching to.

Most providers like BT, Sky and TalkTalk use Openreach’s line-based broadband infrastructure and switching between such providers should be seamless.

The broadband providers signed up to the compensation scheme

‘In many cases when you switch provider they will send you out a new box and you will just be able to plug it in, enter your new password and be online in a matter of minutes.’

However, if someone is switching to a provider away from the openreach network such as Virgin Media, they may face delays and broadband disruption.

‘If you are switching between lines, from an openreach provider to non-openreach, from BT to Virgin for instance, you would need to bring in an engineer and there could be an intermittent down time in between changing provider,’ said Niblett.

‘So do your research and if an engineer is required, try to schedule them in for when your current contract is ending.’

For customers concerned at this prospect, there is a compensation scheme, which some providers are signed up to.

This enables customers to secure compensation for delayed repairs, missed engineer appointments and any delays to the start of a new service.

So if a new service starts later than promised, customers can get compensation.

All of the big four broadband providers are members of the scheme.

How can customers choose a better internet provider?

Industry experts stress that although cost is important, ensuring you have sufficient speed is also vital, particularly given that so many people are now working from home.

96 per cent of UK households can get super-fast broadband, but only about 60 per cent of people have taken up the option of these faster speeds according to Ofcom.

It is possible to check the broadband speeds available in your area as well as the speed your current provider is operating at.

‘There are many people who could be getting faster speeds than they’re currently receiving,’ said a spokesperson for Ofcom.

‘Customers should check if it’s possible to obtain faster speeds as they may find that upgrading to superfast broadband is cheaper than the price they are currently paying.’

It is also wise to consider both the download and the upload speeds being offered by a given provider as upload speeds can go unnoticed, but may be more important to certain people.

Whilst download speeds are relevant for browsing the web and downloading films and music for example, upload speeds are beneficial to those needing to send large files for work purposes or for live video chats and online gamers.

Service levels is also an important consideration for some people.

Ofcom publishes regular customer service and complaints data that can help better inform people when deciding on a provider.

Uswitch: Choosing the right speed for you

10mbps is suitable for one person who does some streaming, but generally uses their broadband for low bandwidth activities such as social media, email, or reading the news.

30mbps is for households with a couple people needing to be online either working or studying at the same time.

60mbps+ is for 4+ people using the internet in your home, and where people are streaming or gaming simultaneously.

100mbps is if you have a big household or are an avid gamer, future proofing your internet requirements with an ultrafast connection, may not be a bad idea.