Renal Medullary Carcinoma (RMC) is a cancer that is most often strikes people aged 10 to 40 years old – a form of the disease where younger people are at a higher risk. It is one of the most aggressive forms of kidney cancer.

Around 80,000 Americans are diagnosed each year, and it is the cause of 14,000 US deaths. It has a median survival rate of only four months after diagnosis, making it one of the deadliest cancers known.

It almost exclusively affects people born with the sickle cell trait – a gene mutation carried by up to 3million Americans. Black Americans are most at risk, with it affecting up to 10 percent of people in the demographic.

Mr Hillman was diagnosed with the condition in August. He was undergoing treatment, but his family said it was unsuccessful.

‘It is with heavy hearts that we announce the passing of our beloved son, brother & father, Ronnie K Hillman Jr,’ a post on the running back’s Instagram account read.

‘Ronnie quietly and peacefully transitioned today in the company of his family and close friends.’

The running back was drafted by the Broncos in 2012, and featured for the team for four years. He won a Super Bowl with the organization in 2016.

He would have short stints with the Minnesota Vikings, San Diego Chargers and Dallas Cowboys before stepping away from professional football in 2017.

Mr Hillman’s family said he entered hospice care on Tuesday because of complications from both his cancer and pneumonia. 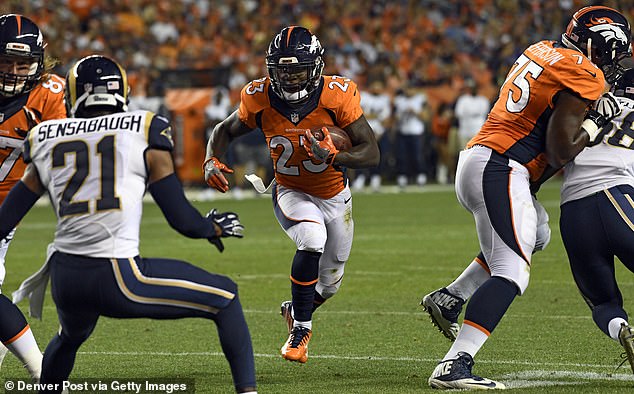 Denver Broncos running back Ronnie Hillman (23) rushes in for a touchdown during the fourth quarter against the Los Angeles Rams August 27, 2016 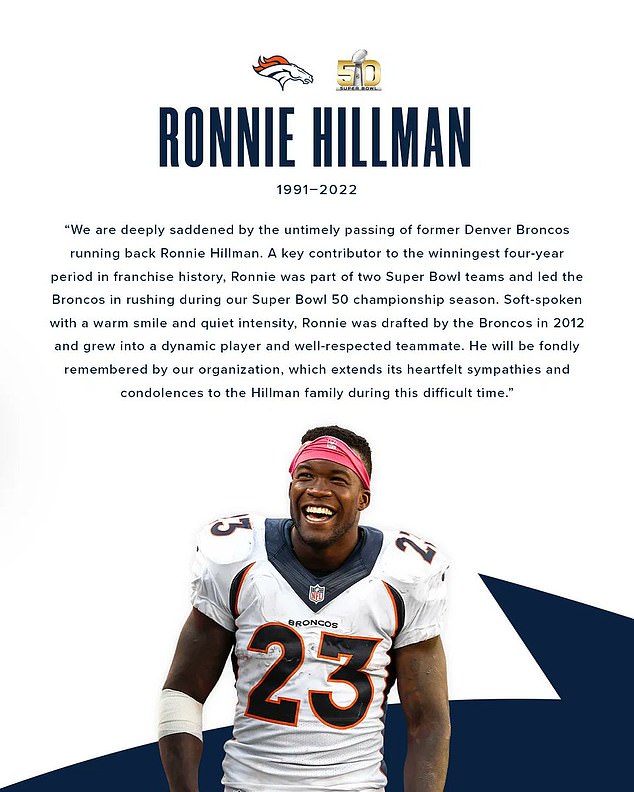 A 2014 report by researchers at the University of Texas MD Anderson Cancer Center explains that RMC primarily strikes young black males – who are twice as likely to develop the disease.

In a 2017 report by Turkish researchers, it is described as having a ‘very poor prognosis’.

This genetic mutation – which occurs in up to one percent of Americans, but 10 percent of black Americans.

It occurs when a person has one copy of the sickle cell trait from their parents. This is different from the dangerous sickle cell disease – where a person acquired the mutation from both parents.

While the sickle cell trait is harmless on its own, it opens those who carry it to significant risk.

Complications can emerge throughout a person’s life, though, like muscle breakdown, reduced blood supply to the spleen – damaging the organ – and glaucoma.

The most dangerous ailment often associated with the sickle cell trait is RMC.

Why exactly the condition develops is unclear. While its like to the sickle cell trait would explain why it affects black people more, scientists have not determined why it strikes young black males in particular.

The average age of its diagnosis is 27, with cases in people over 35 being especially rare.

Cancer risks often increase with age, making RMC a rarity among these types of diseases.

Also unlike other cancers, there are no genetic risks of developing the cancer.

A person who carries the sickle cell trait is just as likely to suffer the disease whether or not a parent also developed it.

The kidney cancer can quickly kill those who suffer from it, and experts urge a person to seek medical attention immediately after they experience symptoms.

Early symptoms include blood in the urine and pain around the kidney. Over time, some will feel a mass develop in their abdomen, lose weight and suffer night sweats.

In a majority of cases, the cancer will first develop in a person’s right kidney.

The cancerous growth will spread to other parts of the body in 95 percent of cases shortly after diagnosis.

Cancer that spreads – called metastasizing – is harder to treat as it is now damaging an even larger part of the body. Metastasis occurs in 90 percent of deaths.

The malignant growth will most commonly spread to a person’s lungs, liver, lymph nodes – in the neck and armpit – and hormonal glands.

It is usually treated via chemotherapy and radiation therapy.