By Ap and Jake Fenner For Dailymail.Com

Apparently the ‘fasten your seatbelt’ sign is no match for the man who leads Broncos Country with a resounding ‘Let’s Ride’.

Broncos quarterback Russell Wilson proclaimed himself ‘ready to roll’ after spending four hours on the flight from Denver to London doing stretches and exercises in the aisles of the plane.

Wilson believes he’s good to go, despite a lingering hamstring injury Wednesday ahead of Denver´s game against the Jacksonville Jaguars at Wembley Stadium.

He was a limited participant in practice at the Harrow School outside London and coach Nathaniel Hackett was noncommittal, but the veteran quarterback was optimistic.

Broncos QB Russell Wilson said he spent half of the team’s flight to London doing stretches and exercises on the plane, saying, ‘I was doing high knees’ while others were sleeping

‘I feel great, ready to roll,’ Wilson said. ‘I’m super locked in and ready to hopefully get a big win in London.’

Wilson, who was held out of Sunday´s 16-9 loss to the New York Jets by Hackett because of a strained hamstring, estimated he stayed on his feet for half of the eight-hour flight to Britain.

‘I was walking up and down the aisles,’ Wilson said. ‘Everybody was knocked out. I was doing high-knees, working on my legs and everything else, making sure I’m ready to rock.’

Wilson took part in stretching and throwing drills but didn’t roll out and throw during the portion of practice that was open to the media at the private school once attended by Winston Churchill. 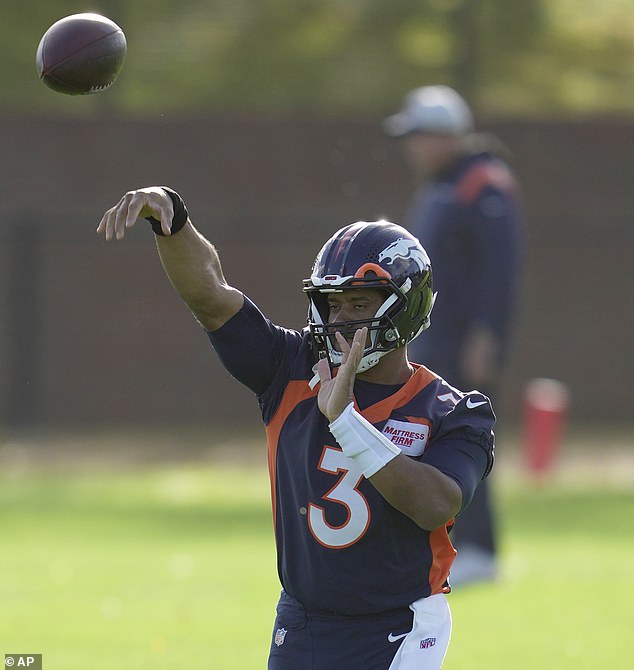 ‘I always want to be out on the field,’ he said. ‘That obviously was tough not being out there. I wanted to help us win and get on a hot streak and just get us rolling.’

Hackett echoed his comments from earlier in the week, saying Wednesday that Wilson ‘is trending in the right way.’

The rookie coach said Wilson did ‘quite a bit’ in practice. Asked what Wilson needs to show him, Hackett said ‘that he can protect himself, just want to be sure that as he gets out there, he’s able to escape, he’s able to move and so forth.’ 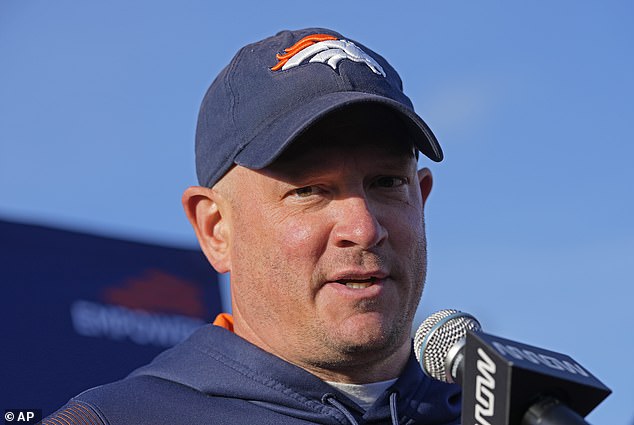 Backup Brett Rypien threw for 225 yards and one interception against the Jets in his second career start. The third-year player out of Boise State completed 24 of 46 passes with no touchdowns.

The Broncos (2-5) lost their fourth straight despite another outstanding defensive performance, and Hackett has faced more scrutiny than any rookie coach in the league because of his team’s offensive woes and his debatable in-game decision-making.

Wilson is off to the worst start of his 11-year career, completing 58.6% of his passes with five touchdowns and three interceptions. He has missed just four games as a pro.

With the Seahawks in 2018, Russell threw three touchdown passes in Seattle’s 27-3 victory over the Oakland Raiders at Wembley. 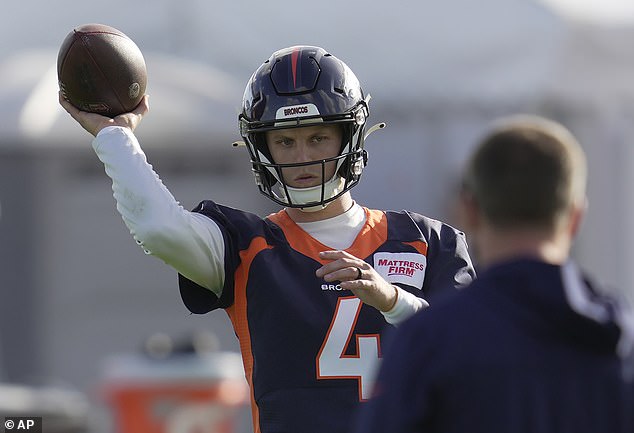