Two spectacular bronze horned helmets discovered in a peat bog in the small Danish town of Viksø did not belong to the Vikings, a new study has found.

The helmets, which were uncovered back in 1942, were actually worn by a different civilisation in 900 BC, more than 1,500 years before the first Vikings in the region, researchers believe.

Now housed at the National Museum of Denmark, the helmets each have peculiar curved horns in the style of a bull and two large domes made to look like eyes.

The elaborate style of the headgear may have made it possible to attach feathers or even horse hair, so wearers could attend sacred rituals in style.

The researchers think the helmets were likely imported from Mediterranean Europe, including Sardinia and western Iberia, before being buried in Viksø. 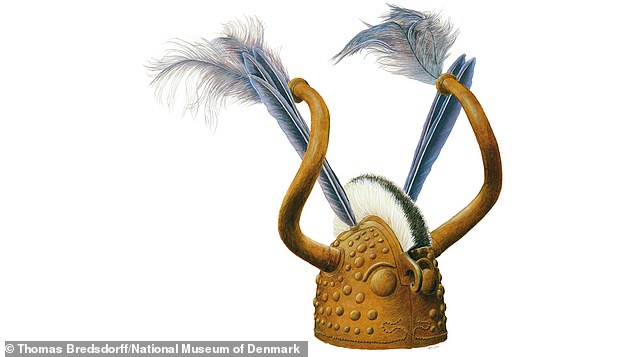 Artist’s impression of how the helmets may have looked with adornments. The helmets were less likely to have been worn for battle than as part of religious rituals, experts believe

THE HORNED HELMETS OF VIKSØ

In 1942, a peat cutter working in the Danish town of Viksø of found a bronze helmet in a bog. Subsequent excavations in the same place revealed another nearly identical helmet.

The helmets have peculiar curved horns in the style of a bull and two large domes made to look like eyes.

Experts think they were less likely to have been worn for battle than as part of religious rituals.

The helmets were less likely to have been worn for battle than as part of religious rituals, the experts believe, before being deposited in the bog as offerings to the gods.

When the helmets were discovered in 1942, one was found resting on a wooden tray of ash, suggesting they were deliberately placed rather than mislaid.

The experts say: ‘This pair of twin helmets communicates to the onlooker an extraordinary agency, suggesting that their wearers wielded power, whether perceived as god, human, or something in between.’

The new study was led by archaeologists at Moesgaard Museum and Aarhus University in Denmark, who have based their new findings on radiocarbon dating results.

Study author Heide Wrobel Nørgaard spotted black residue on one of the helmets and dated it to 900 BC – around 1,500 prior to the arrival of Vikings in Viksø.

One of the tell-tale clues was the elaborate style of the helmets, which matches rock art and figurines dating to the same period on the the island of Sardinia. 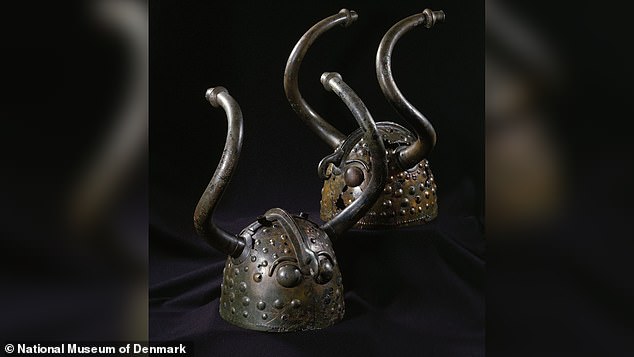 In 1942, a peat cutter working in the Danish town of Viksø of found a bronze helmet in a bog. Subsequent excavations in the same place revealed another nearly identical helmet

These commonly depict warriors with nearly identical horned helmets, according to the study authors.

‘There are huge similarities between them,’ Nørgaard, based at Moesgaard Museum’s Department of Archaeology, told Science.

Because of their similarities with the Sardinian artworks, the experts think bronze crafts and tools were exported along a trade route from Scandinavia to the Mediterranean.

This proposed trade route went around the Atlantic coast, rather than across land through the treacherous Alps, the team think. 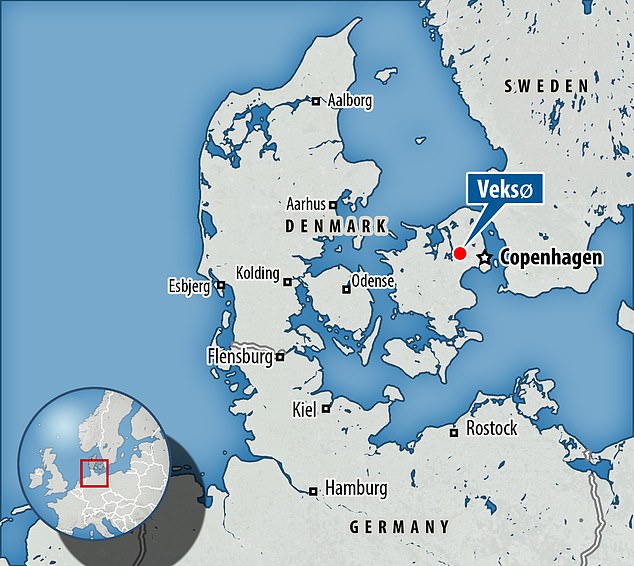 Viksø is a small town between Ballerup and Ølstykke-Stenløse in Egedal, some 20 km northwest of Copenhagen, Denmark

However, one expert who was not involved with the study is sceptical of this proposed trade route.

Nicola Ialongo, an archaeologist at Georg August University, argues that the trade route, if it existed, would have left similar-looking helmets in Belgium, France and the UK.

‘Even if you assume seafarers went directly from Sardinia to Scandinavia, they must have stopped along the way,’ said Ialongo.

The study has been published in the journal Praehistorische Zeitschrift.

DISCOVERY OF THE VIKSØ HELMETS

In 1942, at a newly opened peat-digging area of Brøns Mose at Viksø (Veksø) on Zealand, a worker heard a crunching sound under his spade.

He had chanced upon two almost identical horned helmets of bronze — although the find was initially thought to be waste and set aside.

These were decorated with bosses and adorned with eyes and beaks. The helmets from Viksø are from the Bronze Age and were made in the early part of the first millennium BC.

They were probably used at religious ceremonies. Later on they were deposited in the bog as offerings.

One of the helmets was placed on a wooden tray of ash. The offerings may also have included a ceramic vessel.