A Brooklyn Assembly candidate reportedly once mooned a couple having sex before writing about the escapade in an online blog.

Emily Gallagher, who is running against longtime Assemblyman Joe Lentol for District 50, reportedly shared details of the incident in a 2003 Livejournal post when she was a 19-year-old student at Ithaca College.

According to New York Daily News, Gallagher was meeting with friends in Syracuse when she noticed a couple having sex through a window and decided to watch.

When the couple realized Gallagher was there, she reportedly mooned them.

‘Not only did I stare at people who were having sex in front of a window, but I remained even after they noticed me…’she wrote.

‘I waved, smiled, and when the girl flipped out I mooned her. You’d think i was on drugs… but no!’

Other posts made by Gallagher, now 36, also revealed similar behavior, including throwing a ‘homeless party’ with friends.

‘This consisted of me in a hat and scarf, steve in a fur coat, meaghan wrapped in a blanket and chelle in a garbage bag, passing around a cheap jug of sangria in a paper bag,’ wrote Gallagher.

‘This was very fun but I had no idea how hard the cheapo crap was hitting me. Before I knew it I was dancing with chelle to no music, and reinacting selected scenes from Fiddler on the Roof.’

It’s unclear how old she was during the homeless party. The Livejournal posts were circulating on social media in recent weeks.

Gallagher is set to go head-to-head with Lentol, 77, on June 23 after the Assemblyman has been a member of the Legislature since 1973. 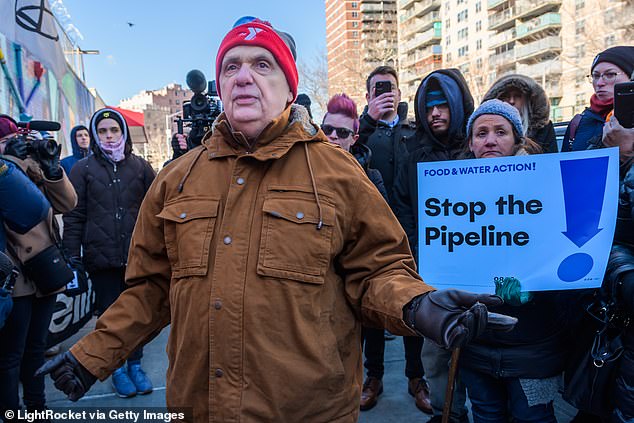 ‘Frankly I’m embarrassed that the Assemblymember’s campaign is goofing around on the internet, scouring for blog posts of a teenage girl,’ Epstein said in a statement to NYDN.

‘Clearly Emily’s message of fighting for every day, working-class New Yorkers is resonating and they’re getting desperate.’

Lentol has only faced one other primary challenger throughout his 47-year career. 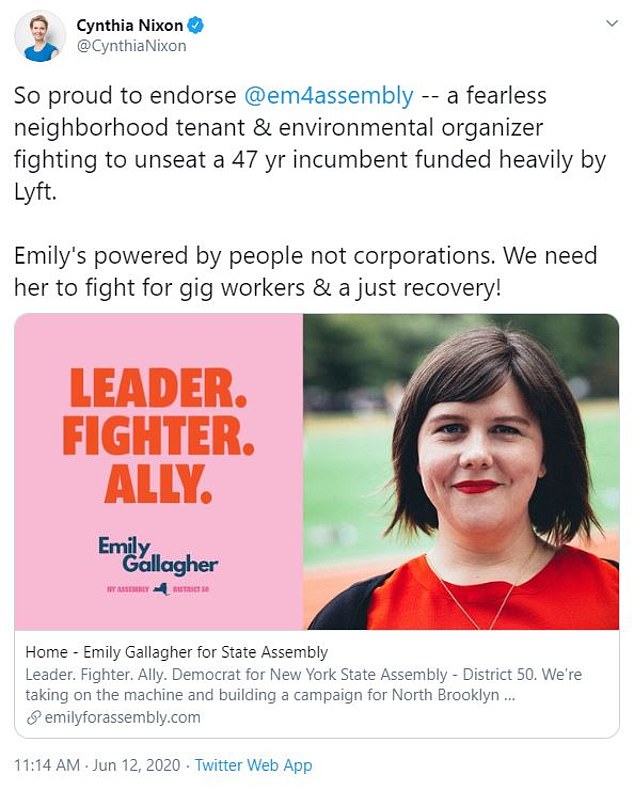 Gallagher has been endorsed by a number of progressive groups and individuals, including former gubernatorial candidate Cynthia Nixon (pictured) 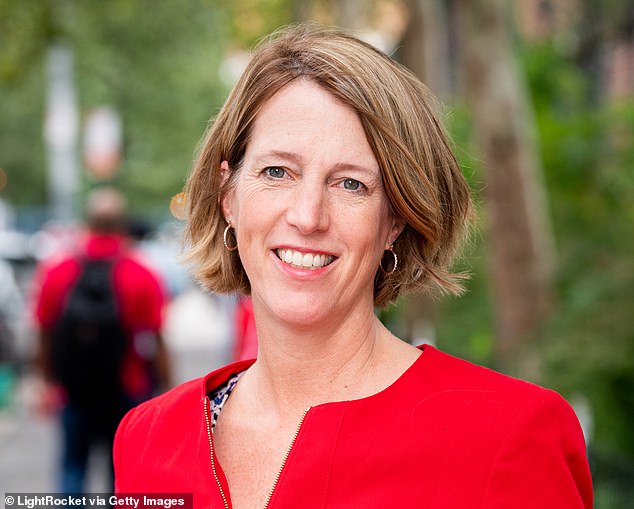 Gallagher, a member of  Brooklyn’s Community Board 1, has been backed by several progressive groups including New Kings Democrats and New York Communities for Change.

She also has the official support of former gubernatorial candidates Zephyr Teachout and Cynthia Nixon.

After graduating from college, Gallagher moved to Brooklyn and soon became an ardent advocate for issues like criminal justice and housing.

A representative of Lentol told NYDN that Gallagher was attempting to  ‘deflect and attack.’

‘Emily Gallagher should be ashamed of her history of denigrating the homeless,’ said spokeswoman Jessica Carrano.

‘While we’re not responsible for finding these statements, they are reprehensible. It’s sad that instead of taking responsibility for her gross and insensitive behavior, she is attempting to deflect and attack–and it’s why progressives are united in supporting Joe Lentol.’