‘It’s unfair to waste his greatness’: Kendrick Perkins says the Brooklyn Nets SHOULD trade Kevin Durant in the aftermath of humiliating loss to Sacramento

Kendrick Perkins has suggested the Brooklyn Nets should do Kevin Durant ‘a favor’ and trade him from the organization.

Durant requested a move away from Brooklyn in the offseason, explaining his reasoning in greater detail following the Nets’ historic loss 153-121 to Sacramento Tuesday.

‘It is unfair, at the moment, to waste Kevin Durant’s greatness,’ Perkins said on ESPN’s NBA Today Wednesday.

‘Right now, he’s not on a team competing for a championship. Sean Marks needs to do Kevin Durant a favor and trade him to a title contender, where we can watch him.

‘We can actually watch him in the playoffs and compete for a championship. I get it, he signed a contract.

‘But he’s also been the most reliable person in the Nets organization since he stepped foot into the franchise.’

High expectations were set for the Nets’ season, as they have since Durant and Kyrie Irving arrived together in the 2019 offseason.

Though Durant argued, in an exclusive interview with Chris Haynes of Bleacher Report, less should be thought of his team amid its current struggles. 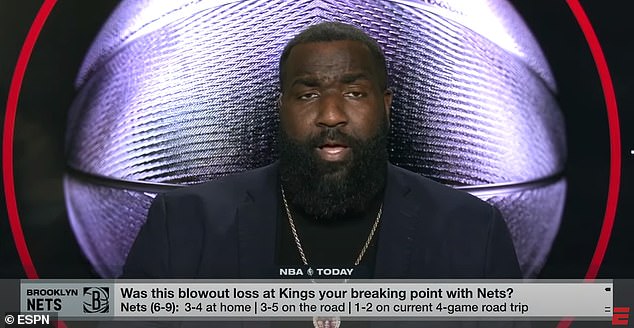 ‘It’s not disrespect, but what are you expecting from that group?’ You expect us to win because I’m out there.

‘So, if you’re watching from that lens, you’re expecting us to play well because No. 7 is out there.’

Despite Brooklyn’s current 6-9 record and the controversy surrounding Irving, Durant insists he is happy with the franchise. 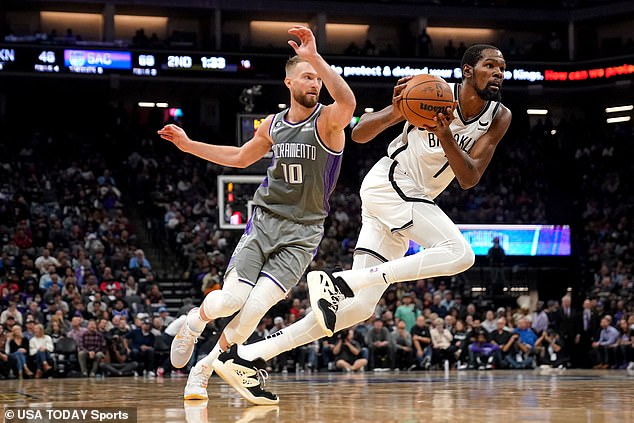 ‘It’s been fun trying to leverage myself to help everybody else get better. I’m learning the game more and seeing all types of crazy defenses every night.