Brooklyn officer forces woman to perform a sex act on him

A Brooklyn court officer has been slapped with charges after allegedly forcing a young woman to perform a sexual act on him in a courthouse stairwell.

Sergeant Timothy Nolan, 58, is accused of forcing 25-year-old Erica McRae to perform sexual acts on him on October 21, 2016.

The man in question apparently beckoned the victim to a nearby stairwell where he said to her: ‘I got you,’ as he pulled out his penis, according to court documents. ‘I will take care of you,’ he allegedly said.

Erica McRae’s attorney Sanford Rubenstein said: ‘She gradually moved down the stairwell, but couldn’t escape, and the defendant forced the victim to touch his genitals’

He then told her to ‘spit on it,’ according to a law-enforcement source.

The young woman was at Brooklyn Criminal Court at 120 Schermerhorn Street waiting to bail out her boyfriend.

While waiting in the hallway, it is claimed she was approached by Nolan who was on duty and in uniform.

The woman believed that if she refused him it could damage her boyfriend’s case, authorities have said.

Her attorney Sanford Rubenstein said: ‘She gradually moved down the stairwell, but couldn’t escape, and the defendant forced the victim to touch his genitals.’

Rubenstein is representing the 26-year-old stay-at-home mom in her civil suit against the court officer, the court system and the state, saying a jury should determine any damages for the emotional trauma.

The victim said she’s glad Nolan’s supervisors took the claims seriously when she reported the incident, which led to criminal charges nearly a year later.

‘I’m just grateful to the DA for proceeding along with the case, and getting an indictment, because I don’t want this to happen to anybody else,’ she said. 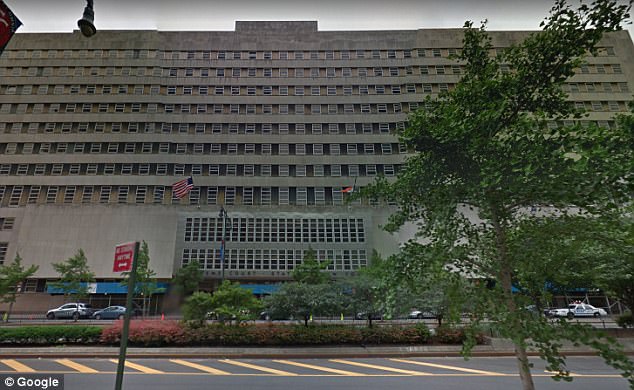 On Monday, Sergeant Timothy Nolan stood before Brooklyn Supreme Court Justice Danny Chun after being charged for allegedly forcing a young woman to perform a sexual act on him

Nolan now faces up to a year behind bars if convicted on misdemeanor charges of official misconduct and second-degree coercion.

He was also charged with public lewdness and exposure of a person.

He was released without bail and has been ordered to return to court on October 4, 2017 but if convicted he faces up to a year in jail.

‘What this defendant – a public servant – allegedly did was a disgrace to his fellow court officers who day in and day out serve the public with respect and work hard to keep our courthouses safe,’ Acting Brooklyn District Attorney Eric Gonzalez said in a statement.

‘He allegedly abused his authority to exploit a young woman who needed assistance in order to gratify himself.’

The sergeant, who has been on modified duty since the incident, refused to comment as he left court.