Brora Rangers 2-1 Hearts: Highland League PART-TIMERS celebrate one of the biggest shocks in Scottish Cup history by knocking out last season’s beaten finalists… in what was their first game in more than TWO months!

By Alasdair Fraser For The Scottish Daily Mail

Brora Rangers pulled off one of the most remarkable shocks in Scottish Cup history by sending Hearts crashing out.

The ring-rusty Highland League side had played just one match in 2021 and just 10 competitively since the pandemic began, but the part-time heroes showed incredible energy, fitness and defiance to hold out against Robbie Neilson’s men.

When a stunning Jordan Macrae opener early on was eventually wiped out by Christophe Berra after 70 minutes, the Edinburgh giants should have finished the job.

Instead, Martin MacLean sent Brora Rangers back in front with a fantastic controlled finish watched by a small crowd of disbelieving locals watching from raised ground outside Dudgeon Park.

Brora Rangers manager Steven Mackay told BBC Scotland: ‘Just an incredible feeling. It’s the single biggest moment in my football career as a player and manager. I’m just so proud of the players and the performance.

‘I don’t think many who watched that game would have begrudged us that result.

‘Jordan MacRae got us the goal and it just shot the confidence right through the team. They’ve got a knack of producing when the odds are against them. It’ll be a surprise to most people but internally to ourselves, not really.

‘These players have unbelievable character and I wasn’t surprised we went up the park and scored again. In a normal season, this would be an astronomical result.

‘But you throw in the circumstances that surrounded this game, we haven’t played a game since the first week in January. We’ve had five training sessions and one friendly and that’s it.

‘We had no right whatsoever to win this game. I’m just so privileged to be manager of such an incredible team. 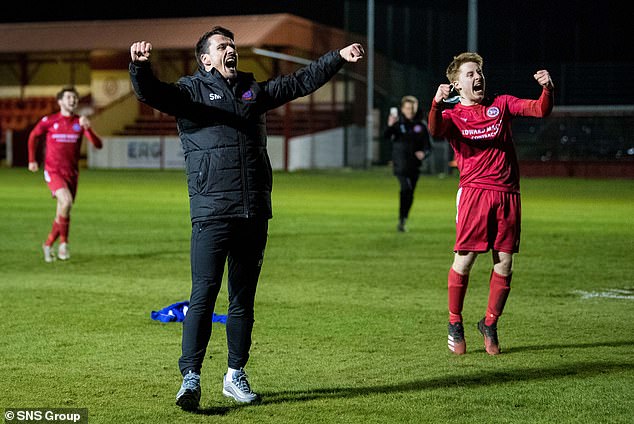 Hearts were somewhat depleted, but the big news came in the shape of John Souttar’s return to the bench after a 13-month absence with an Achilles injury.

But, completely against the run of play, Brora opened the scoring from their first attack after 11 minutes.

It was a stunning moment of magic from MacRae, taking a pass from namesake Andy and rocketing a 22-yard strike into the top right corner of the net.

With Brora hitting on the break, the goal scorer sniffed out another terrific chance inside 23 minutes but saw his attempt deflected for a corner. Championship leaders Hearts, for all their possession, weren’t seriously troubling the Highland champions.

Gary Mackay-Steven’s good work on the left set up Aaron McEneff for an attempt which was saved down low by home keeper Joe Malin, while Armand Gnanduillet nodded wastefully off target from the same supplier on the half hour. 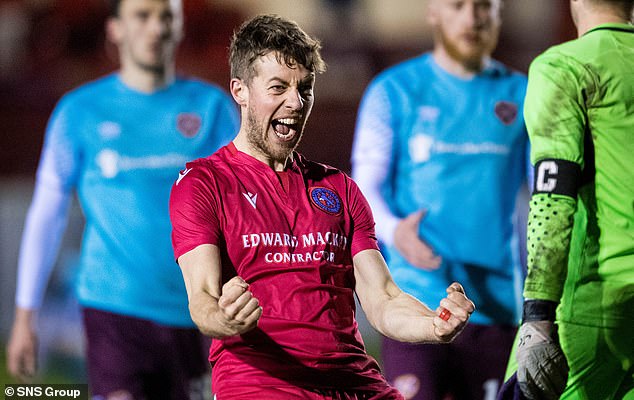 The brilliant Malin had another strong save to make on half-time when he parried a powerful blast from McEneff.

The Hearts equaliser was scrappy. From a corner, Jamie Walker headed back across the box and Berra steered a close-range volley beyond the keeper on 70 minutes.

MacLean showed incredible cool to place a half-volleyed finish high into the net from a tight angle after keeper Ross Stewart failed to deal with a free-kick which flashed across the box.

There was a nerve-shredding finale for the hosts as Hearts — finalists for the last two seasons in this competition — tried to force extra-time. 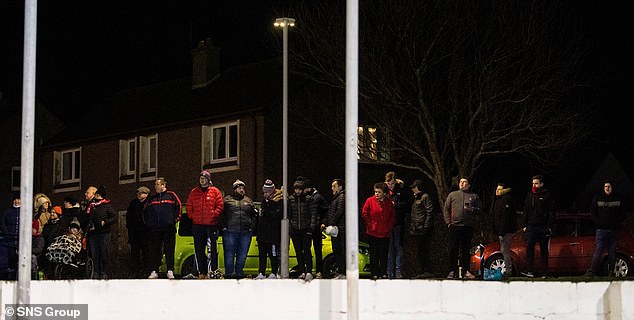 But the small group of officials and fans outside the ground erupted in joy after three minutes of stoppage time.

‘We should not be coming here and losing games no matter how many shots on target we have, it doesn’t matter, it’s about putting the ball in the net.

‘I knew when I came in here I was turning around a ship that was heading in the wrong direction. It had three wins out of 30 in the Premiership. We’ve changed it, we’ve turned it around in areas, but there’s still a lot of work to do.’