Brothers are set to row the Atlantic on a vegan diet

Two brothers hope to become the first in history to row the Atlantic on a strictly vegan diet, as they make a shark-infested journey in memory of their father who passed away from skin cancer.

Greg Bailey, 27, and Jude Massey, 18, from Lymington, Hampshire, will row 3,000 miles from Gran Canaria to Barbados.

Only 317 crews have ever successfully made the crossing on the world’s second-largest ocean, with 153 failing and six teams dying while attempting the trip.

And their journey, which could take up to three months, will be exclusively powered by freeze-dried meals of beans, legumes and nuts as the brothers are set to become the first trans-Atlantic rowers to ditch meat and dairy entirely.

Mr Massey, who is Dr Bailey’s half-brother, said: ‘When you tell people you’re rowing the Atlantic and you’re vegan, their instant reaction is shock. They’ll ask how I am able to sustain myself, how I’m getting enough calories and most of all, how I get enough protein.’

Dr Bailey added: ‘People keep asking about protein. But we are getting all the food you’d expect on a normal crossing and transforming it into a special vegan diet.’ 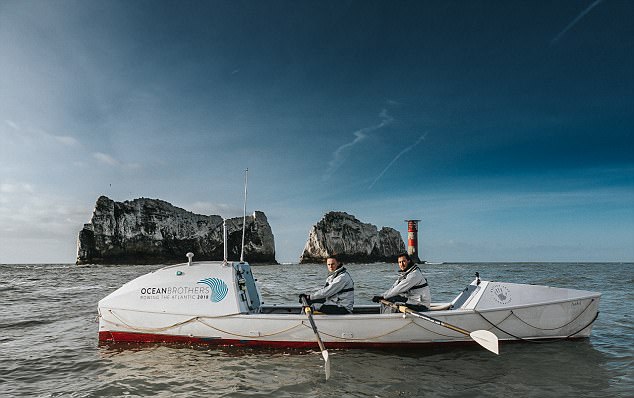 They will row 3,000 miles in memory of their father who lost his battle with skin cancer 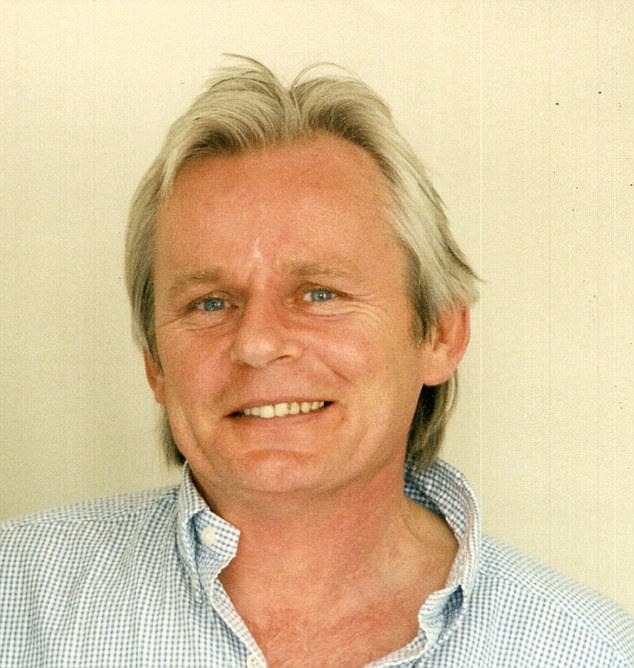 Peter Massey, who died after a 16-year skin cancer battle in 2015, dreamt of sailing the Atlantic

IS IT SAFE TO EXERCISE WHEN VEGAN?

Being vegan should not affect how a person exercises or how often they are active.

All adults require at least 150 minutes of moderate-intensity exercise a week, including two sessions of muscle-strengthening activity.

Vegans should ensure they maintain their protein intake by eating plenty of dried fruit, bananas, and nuts and seeds.

Short-bouts of exercise may be more difficult for vegans as they lack the nutrient creatine, which is only found in meat and provides energy for activities such as sprints.

Vegans also lack vitamin B12, which is important for endurance as it affects red blood cell production.

They should supplement their diet with these nutrients or eat fortified products.

The duo have had a special diet developed, and will be able to choose from porcini mushroom risotto; daal and rice with spinach; bean casserole; chilli; orzo bolognese; spicy Thai noodles; and penne arrabbiata.

According to Dr Bailey, a part-time A&E doctor, their protein will come from various beans and pulses, which have ‘more protein per gram than near enough all meats’.

Usually just a vegetarian, he said: ‘I’ll be a vegan for the trip. Jude has been a vegan for about a year.

‘People keep asking about protein, where we’re going to get our protein. But we are getting all the food you’d expect on a normal crossing and transforming it into a special vegan diet.

‘There are a lot of pulses and beans, made into different meals that will keep us going.

He said: ‘We’ll be eating three of these freeze-dried meals a day. They’re granules in what looks a little like an A4 paper envelope, you just add boiling water that we’ll cook up on a stove we have in the boat.

‘We’ll be snacking on nuts, dried fruits and dairy-free chocolate.

‘Everyone is advising me to take a lot of chilli sauce, soy sauce and HP, just in case it all gets a little too bland. Then we may pack enough to have one can of beer a week each to celebrate.’

Mr Massey added: ‘When you tell people you’re rowing the Atlantic and you’re vegan, their instant reaction is shock.

‘They’ll ask how I am able to sustain myself, how I’m getting enough calories and most of all, how I get enough protein.

‘You need to know where your protein is coming from. But people on a normal diet, they ask where I’m getting mine, but they won’t know where they’re getting it from.’ 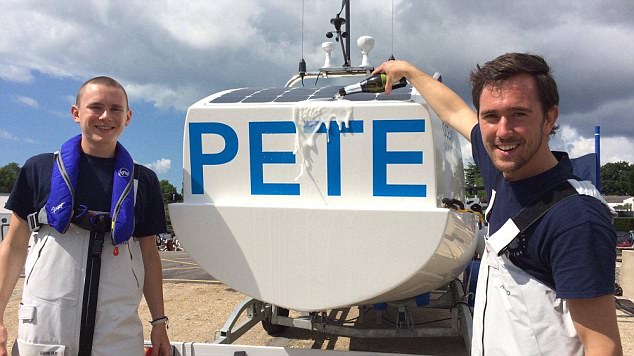 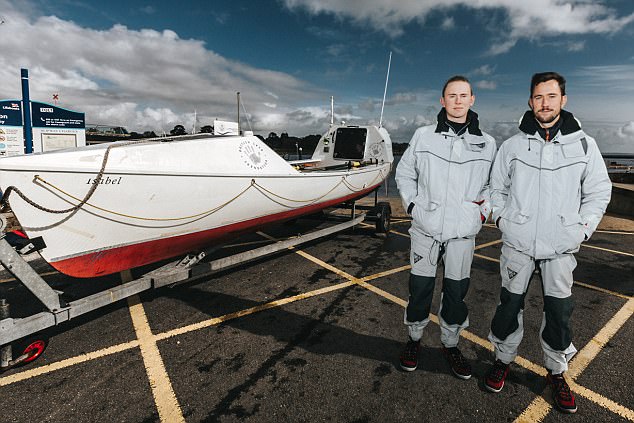 WHAT IS SKIN CANCER?

There are different types of skin cancer, but all generally develop on the areas most exposed to the sun.

The condition usually first occurs as a spot, lump, red patch or ulcer.

Causes include sun exposure, age, and a personal or family history of the condition.

Treatment depends on the skin cancer’s size and the patient’s general health.

Options include surgery and radio- or chemotherapy.

During a crossing of the Atlantic, rowers can expect to burn between 5,000 and 8,000 calories a day – the equivalent of around 31 Big Macs.

Dr Bailey said: ‘The pair of us will be rowing pretty much constantly. Two hours on, then two hours off each, so it will be alternating.

‘That allows you to get a couple of hours kip at a time. There always has to be one of us, as you really need someone to be looking out at all times.’

The brothers hope to raise £100,000 for the British Skin Foundation, in memory of their father and step-father. They also named their boat after Mr Massey, who was a keen windsurfer.

Dr Bailey said: ‘He always said one of his greatest dreams was to sail the Atlantic – we’re carrying on that dream.

‘He was a real handsome and charismatic guy, loved by everyone. He battled and fought so heroically to keep going.

‘He had to endure 10-hour operations and was fighting severe facial disfigurement as much as he was the cancer. But he never took on the victim role or started to pity himself.

‘He’d have loved the trip. And we wanted to attempt something suitably difficult to represent the struggle he went through.’ 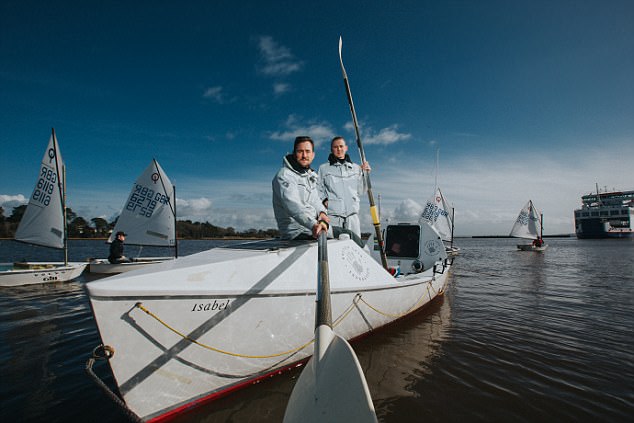 Some 153 crews failed the three-month journey, while six crews even died attempting the trip 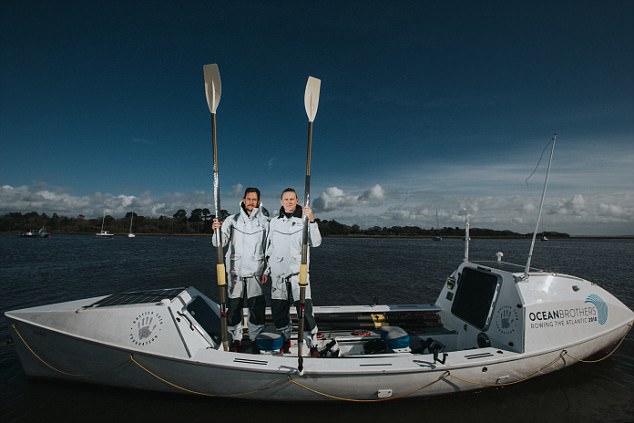 The brothers will eat freeze-dried meals of beans, legumes and nuts, with no meat or dairy 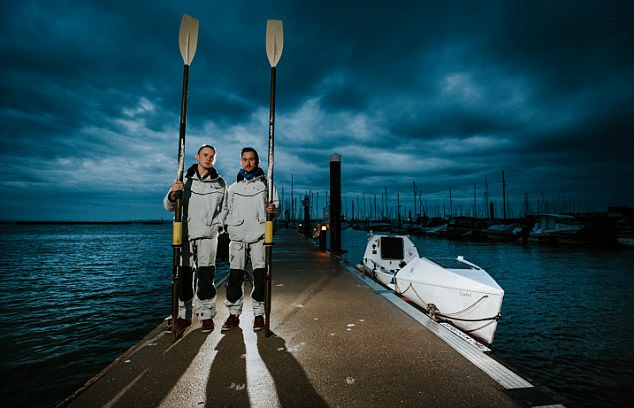 ‘We’re three or four days away from help’

Neither of the brothers have any rowing experience, but are keen surfers and sailors.

Dr Bailey said: ‘Neither of us have ever rowed, or attempted anything like this before.

‘We have no support boat. In the event of a hurricane, if Jude is on deck and then gets thrown off the boat, there’s not a lot we can do.

‘If we needed rescuing, it’s mostly likely we’ll have to rely on a tanker, which has next to no ability to manoeuvre. A lot of smaller boats just end up getting run over by them.

‘We’re three or four days away from help.

He said: ‘There’ll be a few friendly creatures following and we’ll have to scrape off the barnacles from the hull of the boat.

‘One of us will be underneath with a snorkel while the other keeps an eye out for the fins of sharks.

‘It’s hard not to find that kind of thing pretty scary. There are tonnes of things that could potentially go wrong, but I’m not hesitant in doing it.’

Mr Massey added: ‘The whole thought about being unsupported is the thing for me. If one of us were to get appendicitis we’d need medical attention very quickly, and it’s not going to be there.

‘If one of us gets that, then the most likely thing that is going to happen is that we’re going to die.

‘People hallucinate, there will be a real mental challenge. I’ve been told when you see hair on the back of your hands, then that’s when you need to worry.’ 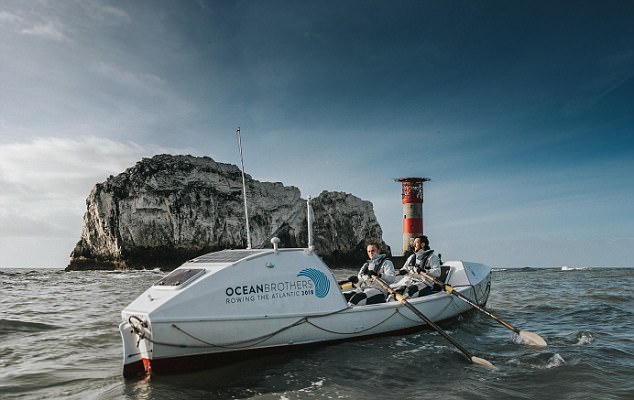 The brothers are up to four days away from help, and are worried they will become ill aboard 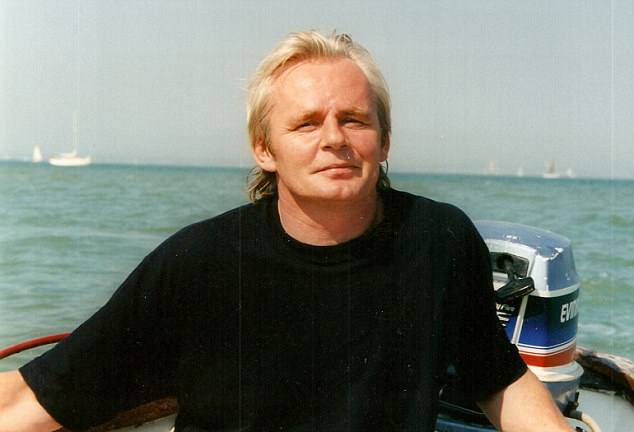 They are urging people to stay sun safe, saying their father would still be here now if he knew

‘It’s fear that drives people when it comes to cancer’

Dr Bailey said: ‘If we can protect ourselves from the sun while we’re in the middle of the Atlantic, then anyone can.

‘It’s fear that drives people when it comes to cancer. If people knew exactly what the risks were, then they’d think twice about the way they look after their skin.

‘People might think “oh, if I get a mole I can just cut it out”. But some of them will grow inwards, some can get into your bone.’

Mr Massey added: ‘There is huge exposure to UV on the Atlantic. In parts, there aren’t many other places in the world where you are exposed to as many harmful rays.

‘We want to prove you can be safe in these environments.

‘You shouldn’t have to lose somebody close to you to be made aware of it. If dad had known about the dangers, he’d still be here now, probably.’

The expedition is due to begin in January next year. The brothers will appear at this year’s TheYachtMarket.com Southampton Boat Show.