Brothers caught up in Jussie Smollett controversy have nothing to hide

An attorney representing two brothers at the center of a probe into the ‘assault’ on Jussie Smollett said they received ‘some money’ from the Empire actor.

Gloria Schmidt spoke to reporters outside a Chicago courthouse where brothers Ola and Abel Osundairo met with a grand jury impaneled to investigate Smollett’s now-disputed claims that he was the victim of a racist and homophobic attack.

Smollett, who is black and openly gay, has been charged with filing a false police report after claiming he had been attacked in what police believe was a hate hoax.

Abel and Ola Osundairo, whom police believe participated in staging the attack, testified before the grand jury for about two and a half hours, Schmidt said.

Abimbola ‘Abel’ (left), 25, and Olabinjo ‘Ola’ Osundairo (right) are the two brothers being questioned over the Jussie Smollett attack whose home was raided in Chicago on Wednesday 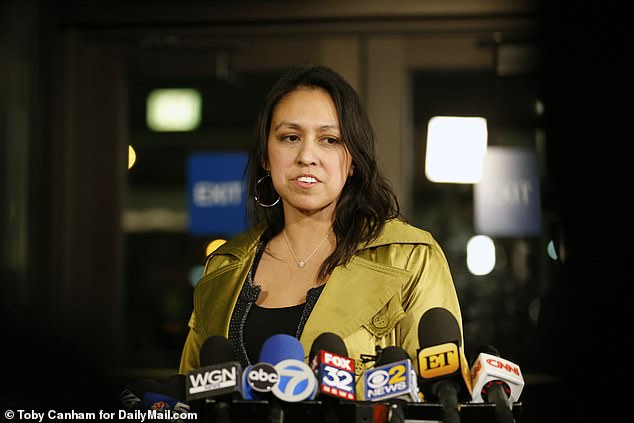 Gloria Schmidt , (pictured), the attorney for the Osundairo brothers speaks with the media following a grand jury hearing at the Leighton Criminal court in Chicago. She said her clients received ‘some money’ from Smollett but refused to elaborate further

Without providing details, she said the two men accepted money from Smollett and wanted to come clean.

She said they weren’t motivated by any promises from prosecutors.

She told reporters: ‘There was a point where this story needed to be told, and they manned up and they said: “We’re gonna correct this.”

‘Plea deal, immunity, all of that — they don’t’ care about that.’

Earlier on Wednesday police announced that they were classifying Smollett as a ‘suspect in a criminal investigation’ and a grand jury was impaneled to hear evidence in the case.

Schmidt said: ‘I think the biggest thing for the American public to understand is this story has a lot of complications.

‘We are not trying to hide anything from the press, we wanted to make sure everything checked out.

She added: ‘My clients spent countless hours getting their stories out there to the police so they can do their work.

She did not expect any charges to be filed against her clients, and said authorities did not offer them any deals or immunity. 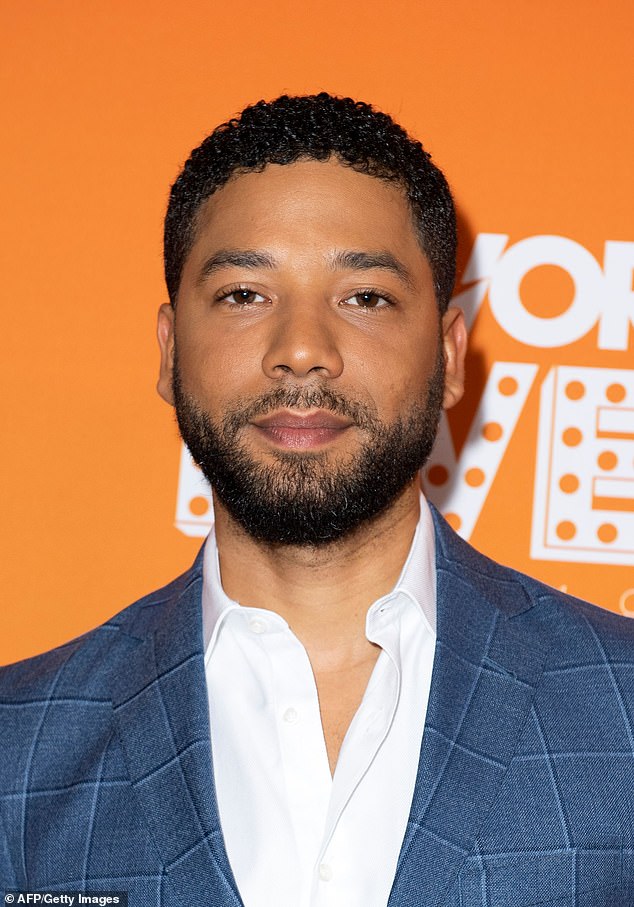 Jussie Smollett, 36, is charged with felony filing a false police report in Chicago after claiming he was the victim of a homophobic and racist attack on January 27

‘You don’t need immunity when you have the truth,’ she said.

Schmidt said she didn’t believe that the brothers were manipulated by Jussie because of his celebrity status.

But she refused to elaborate when asked why the pair would’ve agreed to help Smollett orchestrate the attack. However she added: ‘I think it’s better if they tell the story.’

Schmidt said that Jussie should tell the truth to police because the ‘truth shall set you free.

She added: ‘I think Jussie’s conscience is not letting him sleep right now and he should unload that conscience and come out and tell the American people what happened.’ 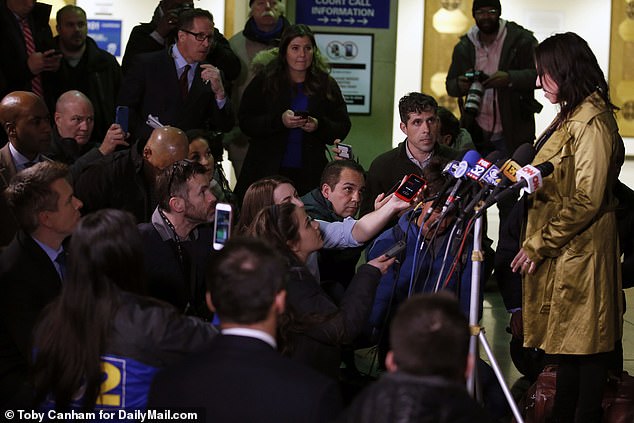 Achmidt (pictured) said she did not expect any charges to be filed against her clients, and said authorities did not offer them any deals or immunity 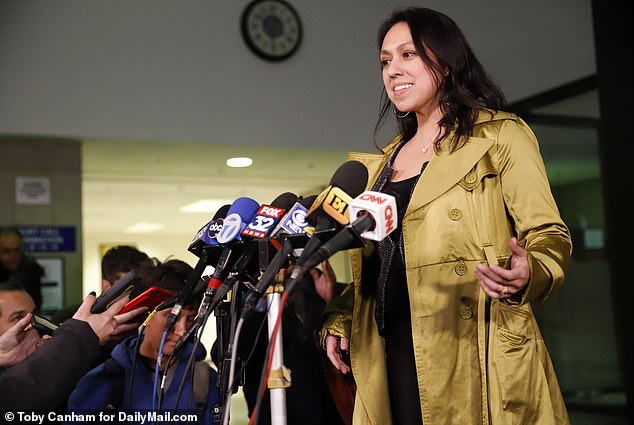 She believes the brothers have been in contact with the actor at least once since the attack was reported.

The brothers, identified by Schmidt as Abimbola ‘Abel’ Osundairo and Olabinjo ‘Ola’ Osundairo, are of Nigerian descent.

But they told a reporter at CBS2-Chicago that they were ‘born and raised in Chicago and are American citizens.’

It is understood that they previously told police that the Empire actor helped create the threatening letter he received at his studio, a week before the alleged attack, according to reports.

Unnamed law enforcement sources told ABC earlier this week that Smollett hired the two men, Ola and Abel Osundairo, as part of the staged attack after the letter that he received on the set of Empire did not get a ‘bigger reaction.’

On January 22, the Empire actor received an envelope containing a letter and white powder.

The stamped letter was addressed to Chicago’s Cinespace Studios, where the popular Fox drama Empire is filmed. 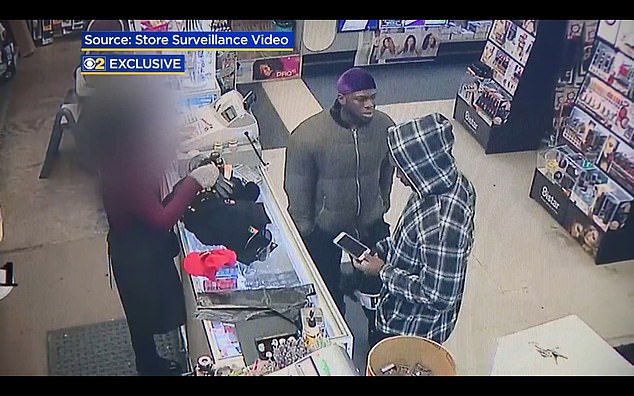 Video footage emerged Wednesday of Nigerian brothers Abel and Ola Osundairo buying ski masks, a red hat and gloves in a store the day before Smollett reported the attack 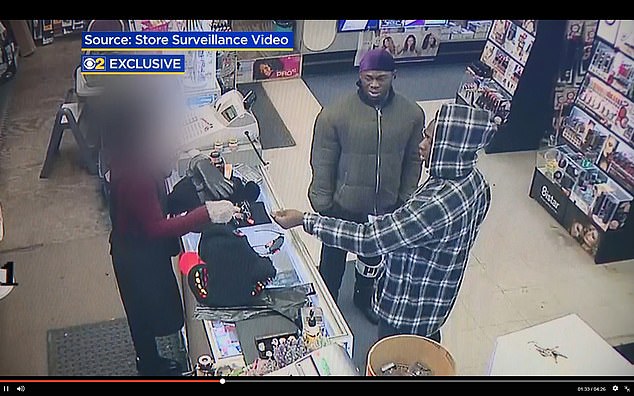 Abel, who was dressed in a blue plaid jacket, put his hood up 30 seconds into it and then got out his phone. He appeared to type and swipe through photographs

When the white powder was discovered, HAZMAT crews were called to the scene, but the substance was later determined to be crushed aspirin.

The letter was scrawled with the words ‘You will die black f*g’, spelled out in cut and pasted magazine letters, and MAGA which was written in red pen.

The brothers are also bodybuilders who have garnered an online following. They  have dabbled in acting and at least one failed business venture, according to social media posts and news reports.

Ola appeared on Empire in 2015 and both brothers have had minor roles on Chicago PD.

The brother’s testimony came as video footage emerged of them buying ski masks, a red hat and gloves in a store the day before Smollett reported the attack.

The footage was obtained by CBS on Wednesday.

It was taken on January 28 and shows brothers Abel and Ola Osundairo inside what looks like a drug store buying the masks and one hat.

Smollett told police that he was attacked by two masked assailants who punched him, poured bleach on him, tied a noose around his neck and called him ‘Empire n****r f****t’. 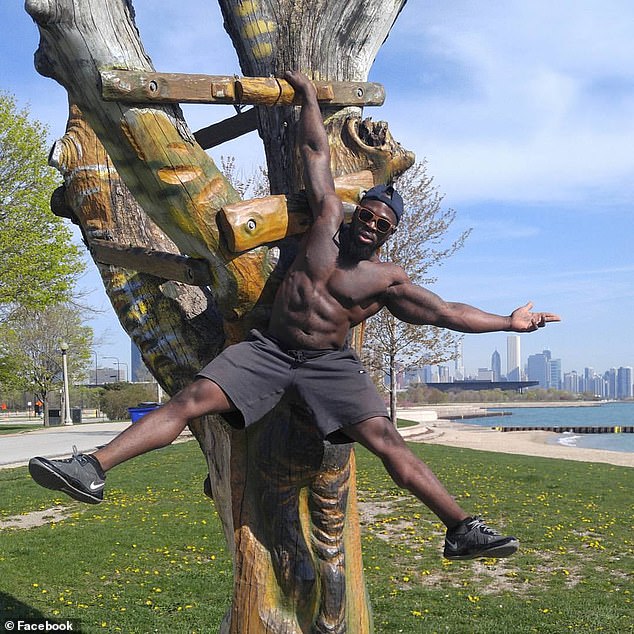 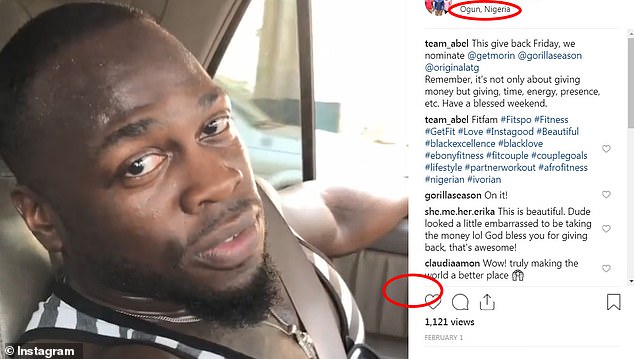 The two brothers were in Nigeria at the start of the month. They flew there hours after the Smollett attack on January 29 and returned on Wednesday

No footage has ever emerged of the incident itself.

In the video taken inside the store the day earlier, the brothers look calm in the video as they bring the items to the register.

The brothers were picked up by police at Chicago O’Hare Airport on Wednesday night as they returned from Nigeria.

They flew there on January 29 hours after Smollett reported the attack and a day after they were filmed in the store.

Once in police custody last week, they reportedly told police Smollett paid them $3,500 to carry out the attack and that he also told them where to buy the rope that was put around his neck.

That was purchased in a separate store, according to police sources.

The video was shared on Wednesday as Smollett’s attorneys met with prosecutors and police in Chicago.

Smollett, who claims he did not know his attackers and that it was a racist and homophobic ambush, maintains he was telling the truth.

Smollett, 36, said he was attacked by two men on January 29 as he walked home from a Subway at 2am.

He has since said he believes he was targeted because he is a vocal critic of President Trump and that he would have had more public support if he had said his attackers were ‘black, Muslim or Mexican’.

The Osundairos promote a fitness and diet program under the title ‘Team Abel’ and  have more than 20,000 Instagram followers and more than 1,600 followers on Facebook. They also have a ‘Team Abel’ YouTube channel.

Smollett follows their joint Instagram account and, according to their lawyer, sometimes goes to the gym with them.

DailyMail.com has identified photographs of one of the brothers inside the gym in Smollett’s apartment building in June last year. The gym is private to residents of the luxury condominium building.

They had previously denied any involvement in the attack and said earlier this month they were horrified to hear o of it with the rest of the world when it grabbed headlines last month.