A little boy who suffers a rare genetic disorder which will eventually lead to him being wheelchair bound doesn’t yet understand the severity of his condition.

Riley Brown knows he is different from his friends. He can’t play like they can, struggles to stand up on his own and is increasingly reliant on his motorised wheelchair.

The eight-year-old was diagnosed with Duchenne Muscular Dystrophy in 2016, when he was just four.

The condition is a progressive muscle disease, and will eventually strip him of his ability to walk entirely. It will also likely reduce his expected lifespan. 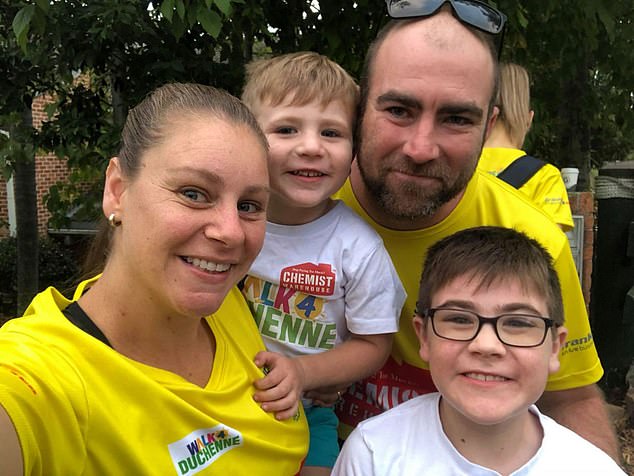 Tragically, his four-year-old brother Tarek was diagnosed with the same condition when he was just three months old. He now watches as his older brother’s condition deteriorates, not yet realising that he faces a similar fate.

There is no cure for DMD and most people with the disease don’t live beyond their mid-20s.

The boys’ mother, Vanessa Brown, told Daily Mail Australia she has done her best to explain to her son what his condition is, but acknowledged it’s been a difficult process.

‘Seeing all the other kids running around, playing sports, knowing that’s something he can’t do is very challenging for a child,’ she said. 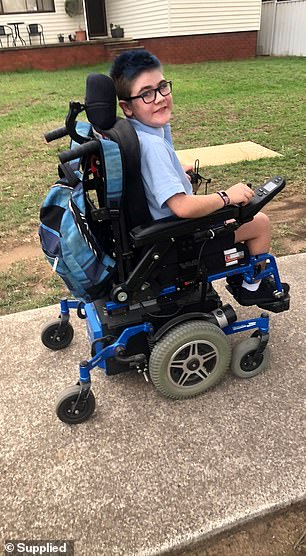 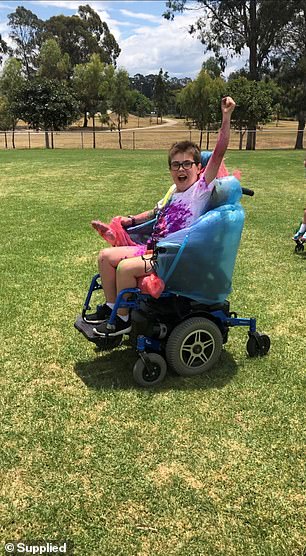 Riley is increasingly reliant on his wheelchair as his condition deteriorates 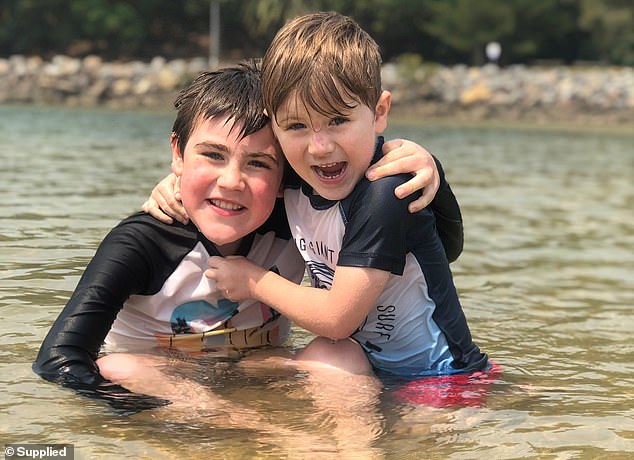 Pictured: The siblings smiling while sitting in a pool. They both love swimming and being in the water

But there is also the additional frustration of losing skills he had already mastered as his condition deteriorates.

‘He doesn’t yet know the full extent of the effects of Duchenne, we have tried to keep his knowledge of the disability age appropriate and to what we feel he is able to cope with,’ Ms Brown explained.

‘But he knows that one day he will no longer be able to walk. That in itself is very devastating for him and something he regularly gets upset about.’

Ms Brown explained how her world turned upside down when the boys received the diagnosis. 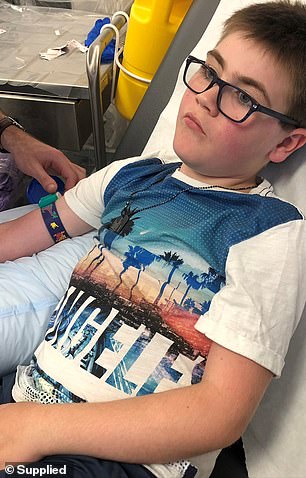 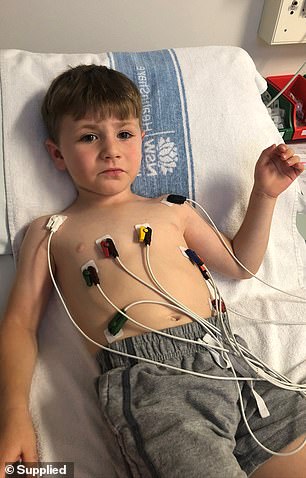 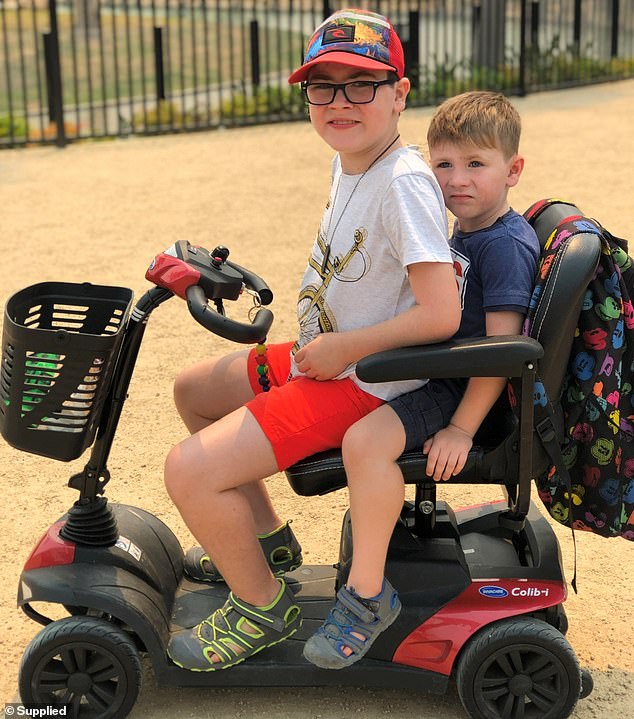 Tragically, Riley’s four-year-old brother Tarek was diagnosed with the same condition when he was just months old. He now watches as his older brother’s condition deteriorates, not yet realising that he faces a similar fate

‘It’s like we’ve been thrown into this whole new world – one in which we have no idea how to navigate,’ she said.

‘As parents, the daily stress and anxiety of trying to keep the boys safe and make the best decisions for them and their future is exhausting.’

The couple live through a ‘constant cycle of grief’ as they watch their boys work so hard to gain skills only to lose them again as the disease worsens.

‘As soon as you come to terms with one change, something else changes and the cycle starts all over again,’ Ms Brown said.

She said she will ‘never forget the words the paediatrician said’ when she took Riley to an appointment to address his walking habits. 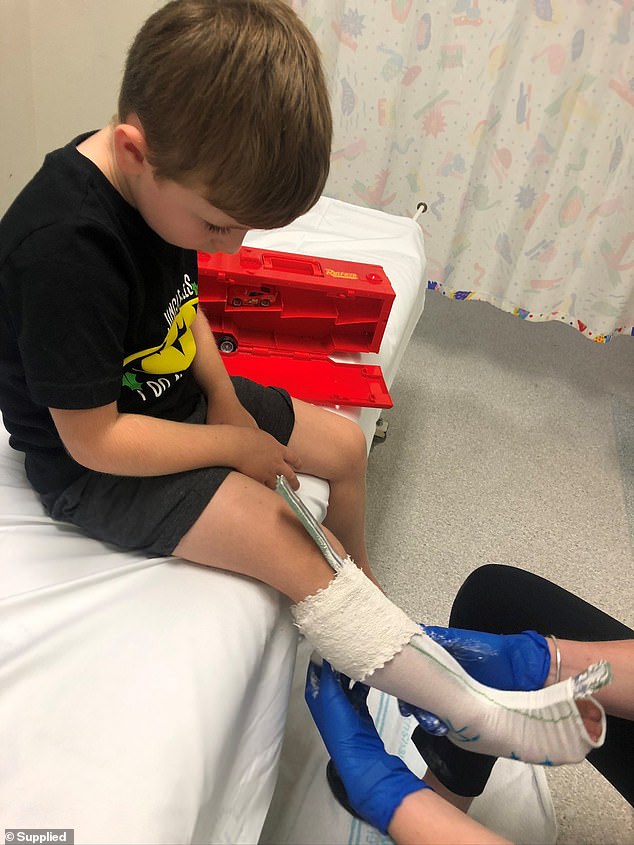 What is Duchenne Muscular Dystrophy?

It targets all muscles in the body starting with the hips and upper thighs, and the muscles deteriorate to the point where the sufferer loses the ability to walk.

Most sufferers are restricted to a wheelchair before they become teenagers.

As the condition deteriorates, it targets other muscles used for breathing, and eventually the heart.

Although classified as a rare disease, it is the most common form of Muscular Dystrophy seen in children.

It can either be inherited or caused by a random genetic mutation.

He had been walking on his toes for ‘as long as we could remember’ and it was beginning to restrict his movement in his ankles, leading to the medical appointment.

The paediatrician took one look at Riley and said: ‘I think I know was it is, I hope I’m wrong but I don’t think I am.’

Riley was immediately sent for a blood test and the doctor urged Ms Brown to bring her husband along to the appointment to receive the results.

‘That for me… alarm bells were going off everywhere,’ Ms Brown said.

‘From that point on our whole world was turned upside down… everything we thought our life would be for us and our family no longer was. You imagine your children growing up, playing sports and just running around having fun being a kid.

‘Simple things that we take for granted that our children no longer would be able to do.’

While the boys struggle to complete everyday tasks, they both love swimming and being in the water.

Because of the low impact nature of swimming, both boys find it soothing and it limits the opportunity for further muscle damage. It’s also great exercise for the boys’ lung capacity.

So far, Tarek hasn’t lost too many of his abilities.

But Riley’s condition has deteriorated to the point where he is regularly fatigued, falls over and struggles to complete everyday activities.

While he once loved the outdoors, he is increasingly spending time inside playing his video games, but is excited for COVID-19 restrictions to lift further so that he can return to power wheelchair soccer.

He can no longer stand up from the floor without assistance and is increasingly reliant upon his power wheelchair.

But as his condition worsens, the family are finding it more and more difficult to get out and about in the community.

They have started a GoFundMe appeal to raise money to buy a new car that they will be able to convert into being wheelchair friendly using government funding.

The National Disability Insurance Scheme will fund the modifications to a car, but can’t fund the car itself. 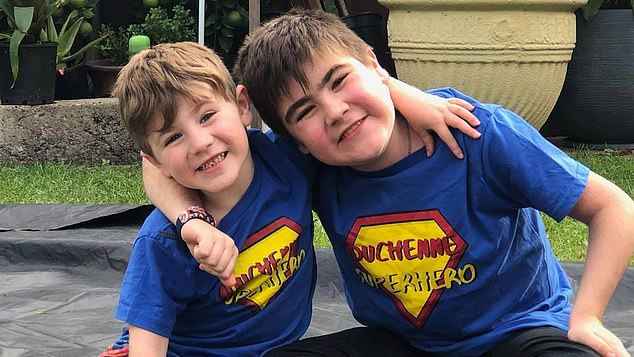 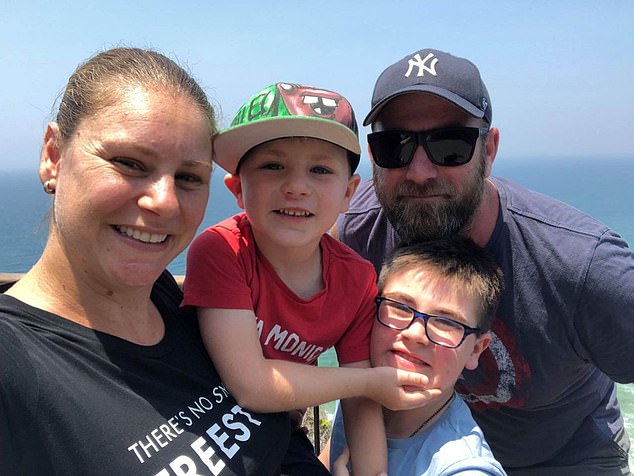 Pictured: The Brown family on a day out. They try to keep the boys active and as healthy as possible

A Week In The Life Of The Brown Family

In an average week, Riley attends several medical appointments to keep on top of his condition.

His mother told Daily Mail Australia that his days are normally scheduled around varying doctors appointments.

For example, Riley normally has to attend physiotherapy, hydrotherapy and occupational therapy each week.

He also has appointments with a psychologist, and then has to make time to see his neuromuscular specialists and orthopaedic specialists.

Ms Brown explained that on top of these regular appointments, Riley also visits a cardiologist, orthotics and respiratory specialists and the endocrinologist, which often leads to more scans and blood tests. 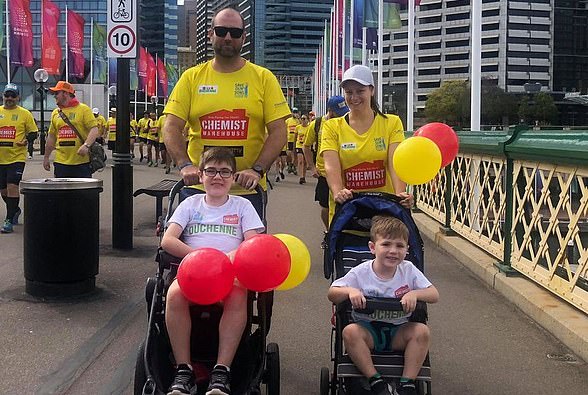