The girlfriend of Bubba Wallace thanked NASCAR fans on Instagram for their support while saying white people — herself included — need to evaluate their own prejudices after a noose was left in his garage stall at Talladega Superspeedway over the weekend.

‘We must continue the conversation, no one is exempt from taking a look at themselves,’ Amanda Carter wrote on Instagram. ‘The fact I date a black man does not exempt me.’

Carter, who has been with Wallace for at least two years, was reacting after her boyfriend was the target of an apparent hate crime on Sunday, only to have his 39 NASCAR rivals and much of the sport rally behind him before Monday’s restart.

Amanda Carter (right), the girlfriend of Bubba Wallace (left), thanked NASCAR fans for their support while saying white people — herself included — need to evaluate their own prejudices after a noose was left in his garage stall at Talladega Superspeedway over the weekend 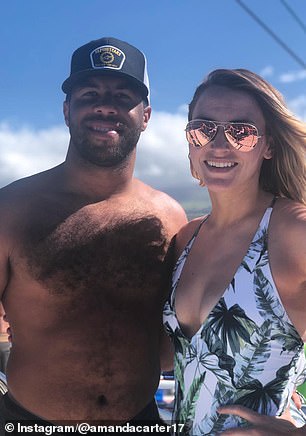 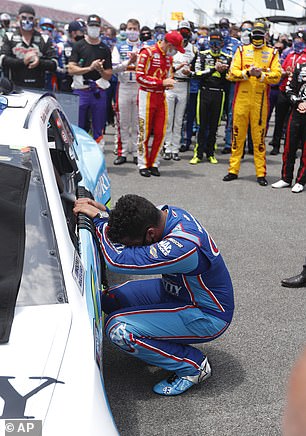 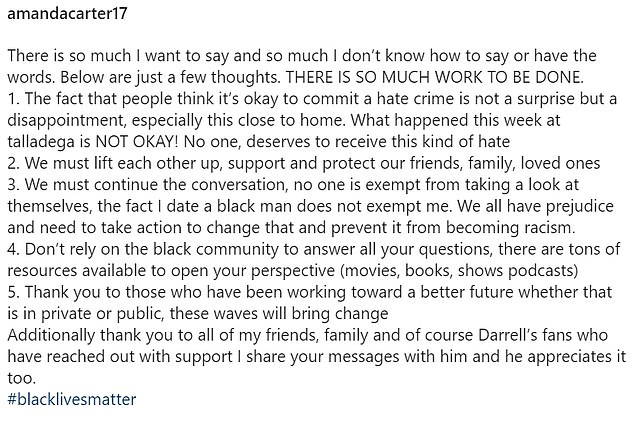 Carter, who has been with Wallace for at least two years, was reacting after her boyfriend was the target of an apparent hate crime on Sunday, only to have his 39 NASCAR rivals and much of the sport rally behind him before Monday’s restart

Wallace — or Darrell, as Carter referred to him on Instagram — finished 14th at Monday’s GEICO 500 at Talladega Superspeedway in Alabama.

However, the real story occurred when the other drivers pushed his No. 43 car to the front of the grid along an infield emblazoned with ‘#IStandWithBubba’ stenciled into the grass. A tearful Wallace punctuated the moment by sharing a hug with car owner and NASCAR legend ‘The King’ Richard Petty.

NASCAR and the FBI are both investigating the incident, with the stock car circuit vowing to ban the guilty party for life.

Wallace had recently drawn backlash from some racing fans for successfully pushing NASCAR executives to ban the Confederate flag.

Wallace removed his medical mask amid fears of COVID-19 after Monday’s race, saying he did so to send a message to his unidentified antagonist. 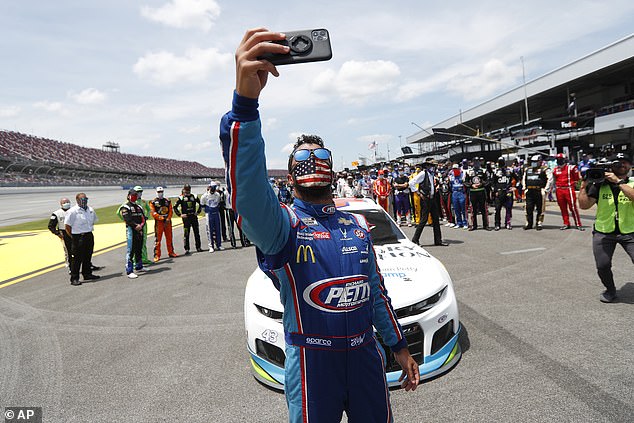 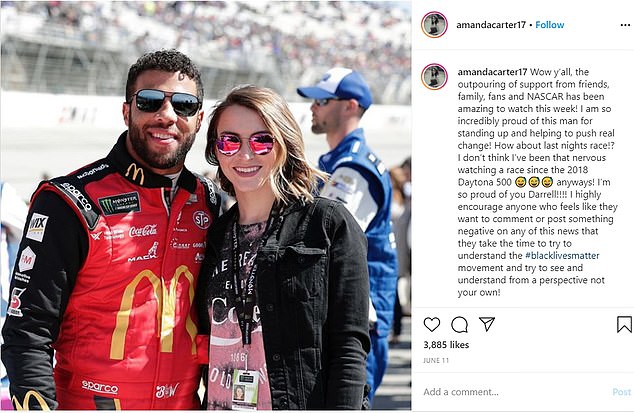 On June 11, Carter thanked Wallace’s fans for supporting him amid widespread racial tension 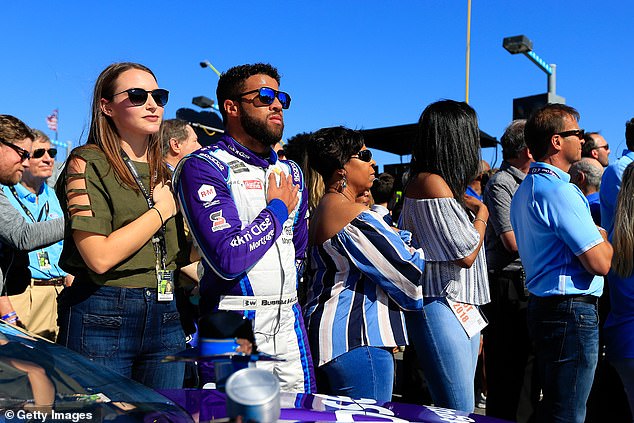 Bubba Wallace stands on the grid with his girlfriend, Amanda Carter, prior to the Monster Energy NASCAR Cup Series 60th Annual Daytona 500 at Daytona International Speedway on February 18, 2018 in Daytona Beach, Florida. He would go on to finish second that day

‘I wanted to show whoever it was, you are not going to take away my smile,’ Wallace said.

While Monday evening may have been a joyous and unifying moment, Carter warned her Instagram followers that ‘there is so much work to be done.’

‘The fact that people think it’s okay to commit a hate crime is not a surprise but a disappointment, especially this close to home,’ she said, possibly referring to the fact that the incident took place in Wallace’s native Alabama. ‘What happened this week at talladega is NOT OKAY! No one, deserves to receive this kind of hate.’ 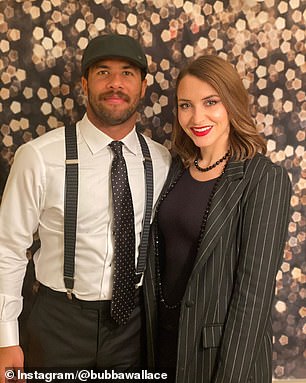 ‘We must lift each other up, support and protect our friends, family, loved ones,’ she continued, listing her thoughts in the moment.

‘Don’t rely on the black community to answer all your questions, there are tons of resources available to open your perspective (movies, books, shows podcasts).

‘Thank you to those who have been working toward a better future whether that is in private or public, these waves will bring change… Additionally thank you to all of my friends, family and of course Darrell’s fans who have reached out with support I share your messages with him and he appreciates it too.’

She ended her caption with ‘#blacklivesmatter’ – a phrase that recently adorned Wallace’s No. 43 for a race in Martinsville, Tennessee.

A graduate of Appalachian State in NASCAR-crazed North Carolina, Carter, a financial analyst at Bank of America, was not familiar with the sport when she began dating Wallace. (It’s unclear when, exactly, they began dating or how they met)

‘Amanda has come into this not knowing which way was up, down, left or right with this sport,’ Wallace told Facebook in a documentary titled ‘Behind the Wall.’

‘She gets it. She understands how much I love it, and I how much I want to do well. Just how competitive I am.’

Wallace has yet to win a race in nearly three seasons on NASCAR’s top circuit, but did finish second at the 2018 Daytona 500 — the sport’s biggest event.

This season he has become a symbol rights figure as NASCAR’s only African American full-time driver.

First, Wallace was thrust into the spotlight when Kyle Larson was heard saying the n-word during a live-streamed virtual race.

Larson, who was fired by Target Chip Ganassi Racing, apologized to Wallace, who released a statement saying the young driver deserved a second chance.

Then, in the wake of George Floyd’s killing at the hands of Minneapolis police in May, Wallace became more outspoken about racism in the US.

‘No one should feel uncomfortable when they come to a NASCAR race,’ the 26-year-old Alabama native told CNN on June 9. ‘So it starts with Confederate flags. Get them out of here. They have no place for them.’

Wallace was speaking following a race Atlanta in which he wore an ‘I Can’t Breathe’ shirt during the national anthem in solidarity with those protesting racist police brutality around the country.

NASCAR responded by banning the Confederate flag, but that was hardly the last word on the matter.

‘Wow y’all, the outpouring of support from friends, family, fans and NASCAR has been amazing to watch this week!’ Carter wrote after the race in Atlanta. ‘I am so incredibly proud of this man for standing up and helping to push real change! How about last nights race!? I don’t think I’ve been that nervous watching a race since the 2018 Daytona 500!

‘I’m so proud of you Darrell!!!! I highly encourage anyone who feels like they want to comment or post something negative on any of this news that they take the time to try to understand the movement and try to see and understand from a perspective not your own!’

Prior to Sunday’s scheduled race at Talladega, where only 5,000 spectators were permitted due to the ongoing pandemic, a caravan of angry fans were seen waving Confederate flags from their vehicles around the main entrance. Another fan paid for a private plane to fly a Confederate flag with the phrase ‘Defund NASCAR’ on a banner over the event, which was postponed to Monday due to rain.

As if that wasn’t enough, someone left a noose in Wallace’s garage stall.

When asked about the noose, one fan told the Associated Press that he ‘thought the incident was funny.’

Others, however, condemned the action, and counter protestors were seen outside Talladega on Sunday with signs reading ‘Not My South’ and ‘Black Lives Matter.’