Buffalo sends lion flying through the air in South Africa

Incredible footage shows the moment a buffalo saves a lizard from being eaten by lions, sending one flying through the air with a head butt.

The fascinatingly heroic scene unfolded at Kruger National Park in south Africa in front of an enthralled audience of tourists.

The video starts off as a group of young lions grapple over a monitor lizard on the dry plain.

We see one lion cub getting a hold of the lizard in its mouth before parting from the rest of the pack, setting it to down seemingly to eat it beside the long grass, shortly followed by another cub.

We then see a buffalo come into view and charge at the lion holding the lizard before stamping on its back and headbutting it, sending it somersaulting through the air and forcing it to release its wounded prey.

The buffalo then stands over the bleeding lizard, seemingly to protect it from the rest of the pack. 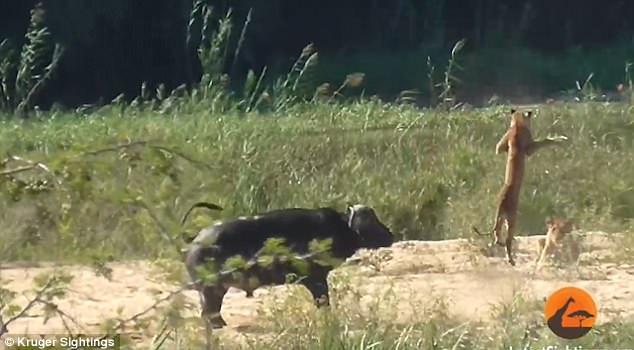 The buffalo, in a seemingly heroic act, tackles the lion cub in an effort to save the lizard from being eaten by the pack

Sune Eloff, 32, was one of the lucky onlookers who witnessed the extraordinary scene.

The business system manager told Latestsightings.com: ‘We spent some time at Sunset dam watching impala coming down for a drink. We decided to move on and saw some lions sleeping in the riverbed.

‘They were so calm and peaceful and then suddenly we saw all of them get up and move into the reeds. At this point I took out my camera as they were watching something that we could not see.

‘Suddenly a young lion came out of the reeds with a water monitor lizard that he had just caught.

‘Some buffalo in the vicinity had noticed that the lion had captured a lizard and one of them came storming in as if he knew this lizard needed protecting.

To our absolute astonishment, the buffalo proceeded to get his head right under the puzzled lion and somersault him through the air. It was crazy! 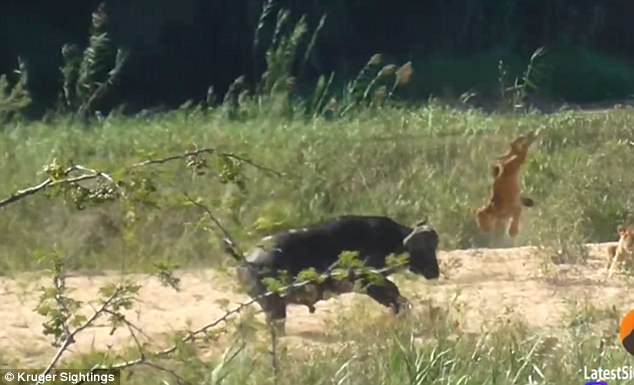 The buffalo stamps on the lions back before head butting it, sending him somersaulting through the air

The excitement of everything happening was overwhelming. I felt bad for the young lion, but luckily he had enough brains to know that he needed to get out of there, and fast, so off he ran.

‘The three dagga boys (male buffaloes) still charged into the reeds every now and again but the lions scampered off.’

I have never seen anything like this in my life and I’ve been a Kruger visitor since the age of 2, definitely a first for me!’