Western Bulldogs star Mitch Wallis has made a moving on-field tribute to his mother-in-law after she was hit and killed by a car a fortnight ago.

The mother of his wife Emily died in hospital on April 21 after the accident, plunging the couple into mourning and causing the midfielder to miss the Dogs’ clash with Adelaide in round six.

Emily was heavily pregnant at the time and gave birth their second child, William, three days after her mother passed away.

‘We are pouring our energy into our miracle. We feel blessed to be inundated with words of strength, care and support over the past week,’ Wallis wrote after the birth.

‘William is and will continue to be a pillar for healing for our family as he grows under the watchful eye of his nana.’

Wallis made the moving gesture in Sunday’s match against the Bombers when he kicked the Dogs’ first goal of the contest with 17 minutes left in the first quarter.

After kicking true he kissed his black armband, looked towards the sky and thrust both hands upwards before celebrating with his teammates. 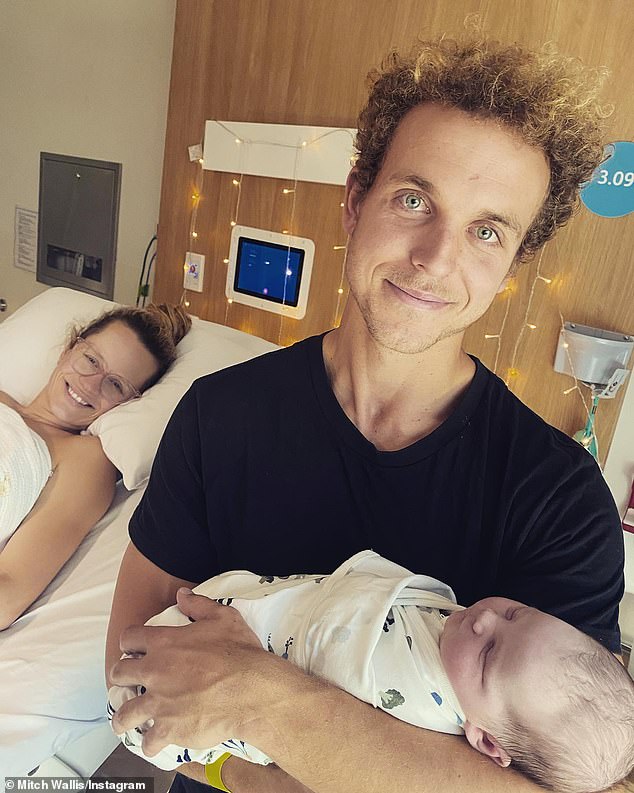 Wallis and his wife Emily welcomed their second child, William (pictured) just three days after the tragedy and said he would ‘grow under the watchful eye of his nana’

‘Your football club is like a second home,’ he said. ‘Everyone feels that and is really emotional around what’s happening with Mitch and Emily and their families.’

Beveridge also revealed the team had been hit with another tragedy that week with development coach Travis Varcoe losing his mother.

‘It’s been a challenging week for the group, the club,’ he said.

Wallis went on to kick another goal as the Dogs pulled away from the Bombers to lead 76-40 late in the third quarter. He also racked up nine kicks and four marks while running for 175 metres.