Bulls 2 Man 0: Bull-runner gets completely taken out by animal during Spanish festival

Bulls 2 Man 0: Bull-runner gets completely taken out by animal during Spanish festival, and is then squashed up against barrier by a second beast – but manages to avoid serious injury

This is the shocking moment a young man is sent flying when he is attacked by two huge heifers during a bull running festival in southern Spain.

The incident was filmed during the running of the bulls event in the town of Moratalla in the south-eastern Spanish region of Murcia when the 25-year-old man side-stepped one bull but ran directly into the path of another.

In the footage, a group of festival goers is seen running down the road to avoid the running heifers.

The horrifying moment the man is trapped between two enraged cows at a bull-running event in Moratalla, Murcia, southeast Spain

The unnamed man runs towards the fence and manages to side-step the advances of one heifer, but spins into the path of another which sends him flying.

At one point, he appears to be trapped between two cows trying to gore him from opposite directions.

The first heifer then uses its horns to toss the man around near the fence as spectators scream in shock. 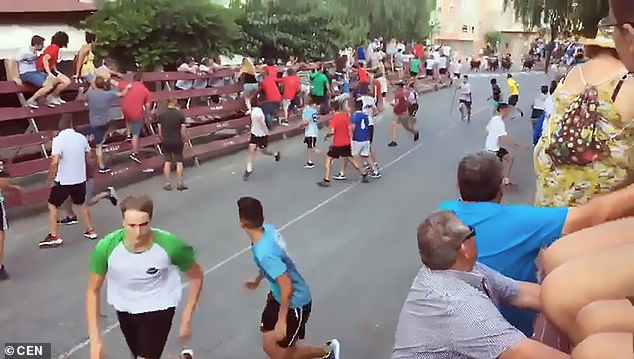 Runners scatter or mount the roadside barrier as the animals round the corner at the bull run in Moratalla, Murcia 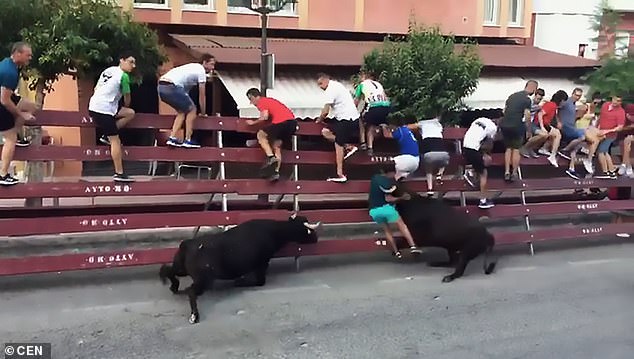 Sticking it to the man: A cow tosses the man in green shorts as another charges in from the opposite direction

Some try to shoo the beast away with their feet and sticks from their perch on the barrier along the side of the road.

The cow continues to violently butt the man into the barrier with its head and horns  for a full 15 seconds while other spectators jump off and flee in panic.

At the end of the clip, several men manage to pull the heifer away from the victim by its tail.

According to the mayor of Moratalla, Jesus Amo, the man was not gored by the horns and he sustained strong blows to his abdomen. 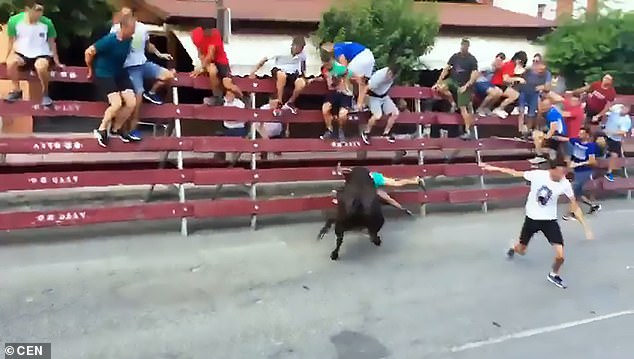 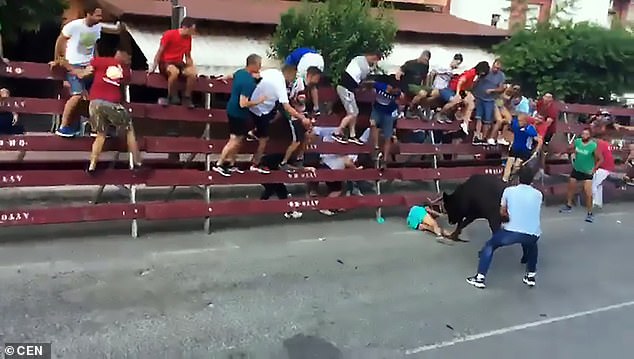 A brave fellow-spectator grabs the heifer by the tail and pulls it off the injured man, as others rush to his aid

‘It is a miracle he wasn’t gored, Amo added.

‘We were all surprised that the heifers focused on him and one of them managed to trap him against the fence.’

The mayor said that the victim was unconscious for a short time, but went to a nearby medical centre by himself.

After checks, he was then transferred to a hospital where he is said to be in a stable condition. 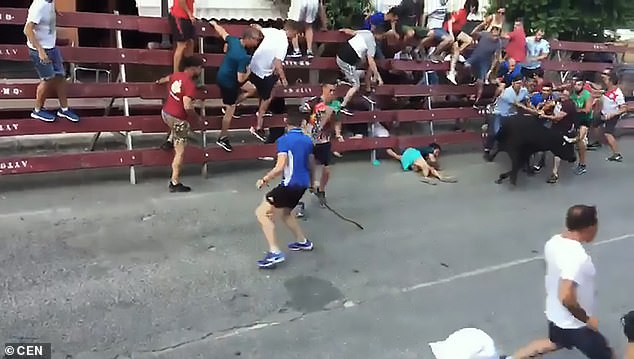