An anti-masker, dubbed ‘Bunnings Karen’, has defended travelling to regional Victoria to get her nails done amid a deadly second wave of coronavirus infections.

Lizzy Rose, a self-proclaimed high priestess who performs exorcisms for a living, controversially filmed herself clashing with Bunnings staff over the mandatory face masks.

All residents in metropolitan Melbourne and Mitchell Shire are required to cover their faces when they leave their homes during the current stay-at-home orders.

But Ms Rose on Saturday took to Facebook to brag about travelling to ‘numerous country towns’ in Victoria. 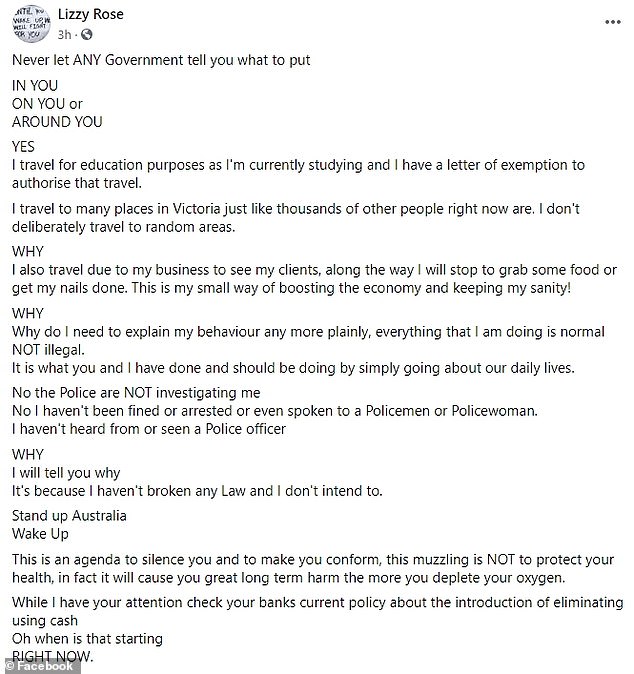 ‘It was wonderful to get my nails done and chat with the locals about the truth of the coronavirus agenda and to encourage people to say NO to wearing a forced facial muzzle of compliance,’ she wrote.

Ms Rose on Wednesday said she was not breaching the stay at home restrictions as she has ‘a letter of exemption’.

‘I travel for education purposes as I’m currently studying and I have a letter of exemption to authorise that travel,’ she wrote on Facebook, alongside an article.

‘I travel to many places in Victoria just like thousands of other people right now are. I don’t deliberately travel to random areas.’

Ms Rose also said her work requires her to move around.

‘l also travel due to my business to see my clients, along the way I will stop to grab some food or get my nails done,’ she wrote.

‘This is my small way of boosting the economy and keeping my sanity.’

Ms Rose continued to claim she was not breaching the restrictions – which have been introduced for the safety of Victorians.

‘Why do I need to explain my behaviour any more plainly, everything that I am doing is normal NOT illegal,’ she wrote.

‘It is what you and I have done and should be doing by simply going about our daily lives.

‘No the police are NOT investigating me. No I haven’t been fined or arrested or even spoken to a police man or police woman.’

Ms Rose has emerged as one of the leaders of a group of Melburnians that has come to police attention since mandatory mask laws came into force on Thursday July 23.

Victoria Police have issued 103 fines in the past 24 hours over the breaching of Chief Health Officer Brett Sutton’s directions to behave during COVID-19.

There were also 33 fines issued for failing to wear a face covering when leaving home.

Victorians in lockdown are only allowed to leave their homes for four reasons: Shopping for food or other essential items, to provide care, for exercise and for work or study.

Nine more fatalities were also reported, taking the state’s death total to 92 and the national figure to 176. 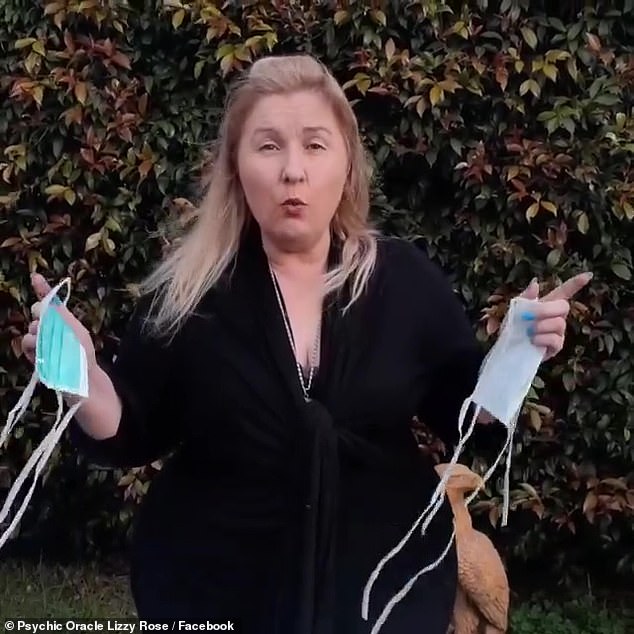 Ms Rose, a self-proclaimed high priestess who performs exorcisms for a living, controversially filmed herself clashing with Bunnings staff over the mandatory face masks