Lee hailed Burberry as a ‘legendary luxury brand’ and London as ‘a city that champions pioneering creativity’.

His return to British fashion will take him back to Yorkshire, as Burberry’s iconic Heritage trench coat is handmade in Castleford, just 25 miles from Bradford.

Tisci’s predecessor Christopher Bailey is also a Yorkshireman, hailing from nearby Halifax.

Questions over Tisci’s future had been swirling since Gobbetti’s departure amid rumours new boss, Jonathan Akeroyd, who previously ran British brand Alexander McQueen as well as Italian group Versace, is plotting a change in direction.

Tisci’s swansong at Burberry came on Monday when the 166-year-old firm’s spring/summer 2023 collection was unveiled at London Fashion Week, with models including Naomi Campbell donning its latest outfits.

Rogerio Fujimori, an analyst at broker Stifel, said Lee’s appointment should be seen as a ‘long-term positive’, but acknowledged a change of creative director ‘creates some level of disruption for luxury brands’.

He said: ‘[Tisci’s] collections were not able to create the strong buzz seen at the hottest luxury brands in the past five years. It is understandable for Burberry to bring someone new for a new chapter.’

Born to a mechanic father and office worker mother, Lee graduated from Central Saint Martins College in London before working for designers including DKNY and Parisian brand Celine.

In 2018, he was appointed creative director of Bottega Veneta and was credited with turning it into a hot brand by reinventing its classic woven leather accessories into unusual handbags and footwear. Celebrity fans included pop star Rihanna. 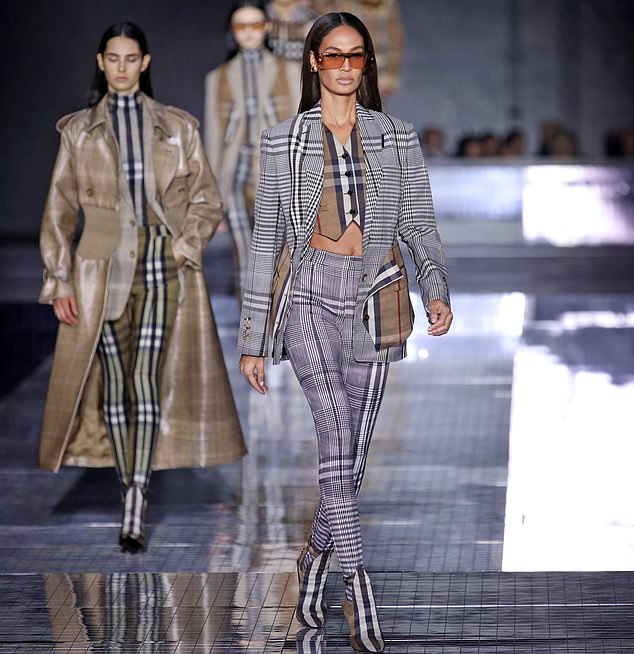 Reshuffle: Tisci’s swansong at Burberry came on Monday when the firm’s spring/summer 2023 collection was unveiled at London Fashion Week

But Lee stunned the industry by abruptly leaving in November, although the company said it was a ‘joint decision’ to end the partnership.

His arrival at Burberry comes amid a wider reshuffle. Aside from bringing in Akeroyd in April, chief operating and financial officer Julie Brown is joining drugs giant GlaxoSmithKline, and leaves in April.

The shake-up comes as Burberry attempts to revive a business battered this year by lockdowns in its core Chinese market that forced its stores to remain closed for weeks. In a quarterly update in July it said sales rose just 1 per cent year-on-year.

Akeroyd, 54, has signalled that he wants to strongly promote the group’s heritage and British roots, to boost its luxury reputation and drive sales.

His predecessor Gobbetti, alongside Tisci, worked to lift Burberry’s status while also shifting focus to attract younger audiences by striking partnerships with figures such as footballer Marcus Rashford.

The new chief executive will also be hoping to rejuvenate Burberry’s anaemic share price, which despite several swings is around where it was five years ago. Yesterday, the shares rose 5.5 per cent, or 92p, to 1776.5p.

But the cost of living squeeze and recession fears are weighing on the ability of consumers to splash out on luxury.

‘Burberry may face a challenging time ahead with slowing global growth which could weigh on consumer demand from its key markets including China,’ said Victoria Scholar, at Interactive Investor.