Burning Man, the famed art and music festival held deep in the Nevada desert, is set to kick off this week as organizers prepare for an expected 70,000 revellers this year alone.

The annual festival held at the end of the summer consists of a vast, purpose-built ‘city’ which is reconstructed from scratch again every year, and hosts a mind-bending array of art, music and live performances.

Photos taken before the tens of thousands of festival-goers inundate the usually deserted arid plains of the Black Rock Desert in northern Nevada, capture the eerily quiet calm before this week’s impending storm.

A fully recreated intersection, complete with a bus stop and traffic lights, is built on the playa but appears eerily vacant ahead of the throngs of thousands who will walk across here over the coming week 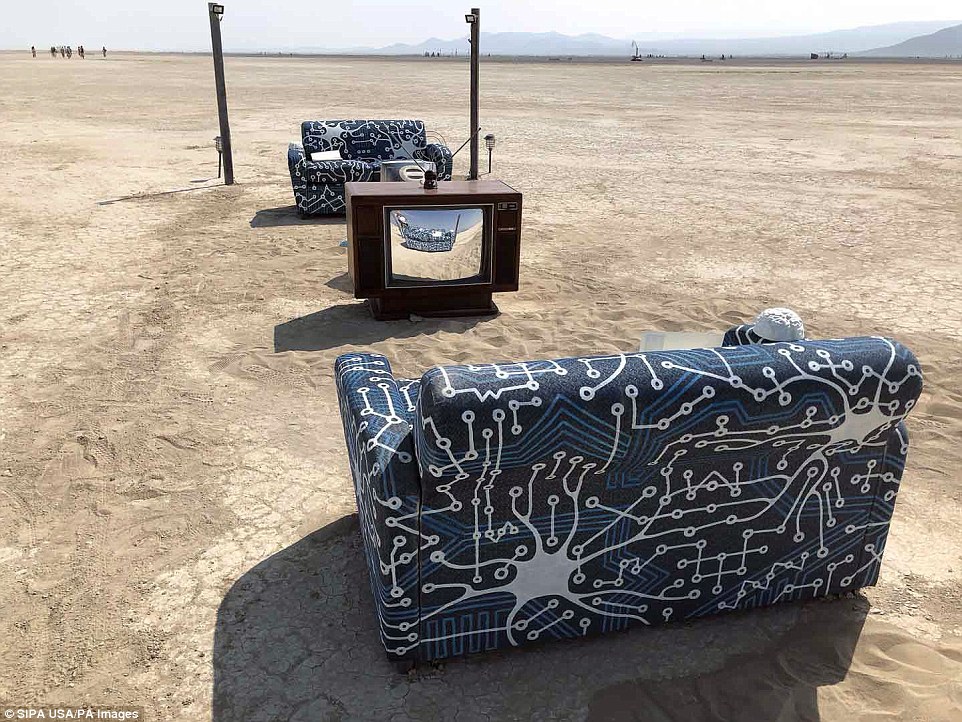 A scene is arranged with two couches facing a mirrored TV on one side, and a person coming out of a computer, holding a smart phone on the other. Festival ‘burners’ are invited to write notes in a notebook on the two couches 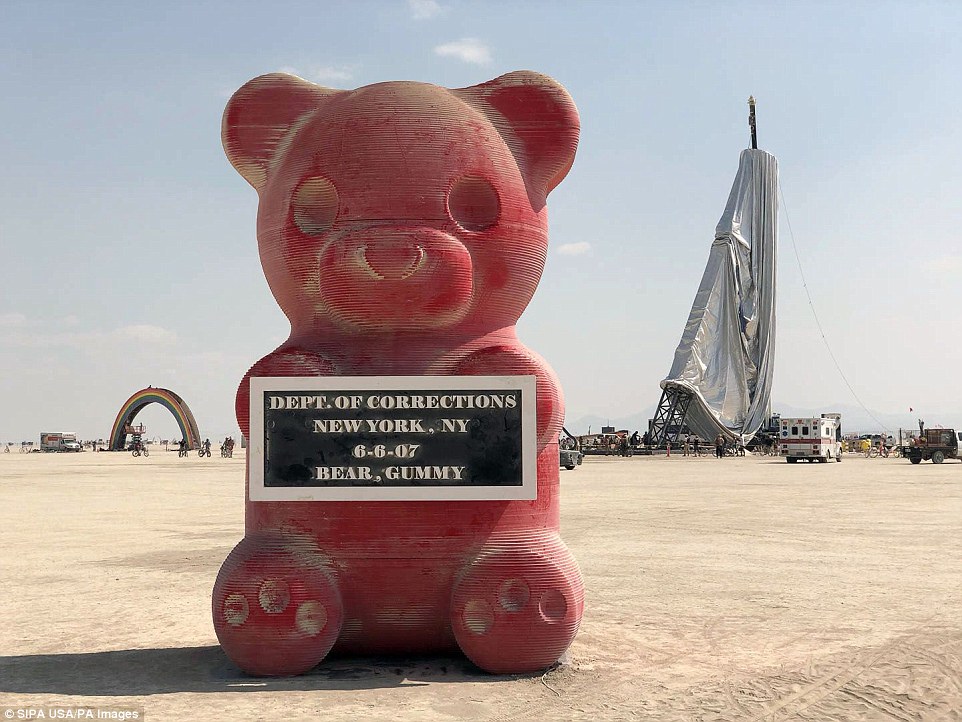 A giant gummy bear sculpture stands in the playa at the centre of the festival. To the left, a rainbow stairway and to the right, ‘The Orb’ is seen under construction 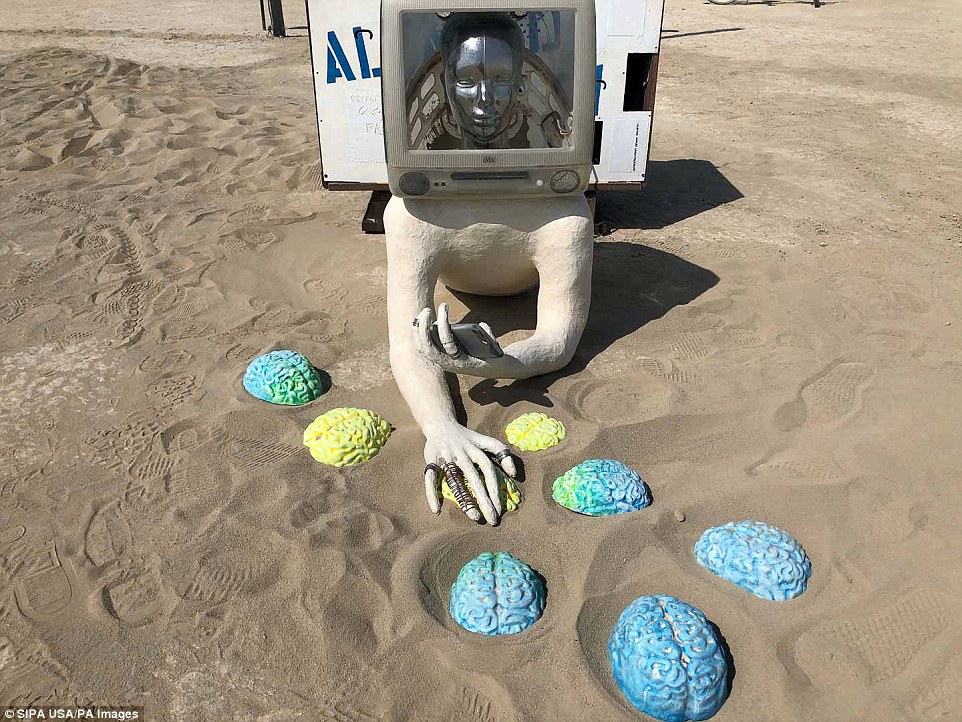 The festival kicked off Sunday and is scheduled to run through the following Monday with celebrity guests such as the likes of Cara Delevingne and Elon Musk among previous years’ attendees.

The tens of thousands of ‘burners’ are expected to attend the revelry, donning other-worldly costumes and leaving their cash at home for a week of all-night parties in the temporary city known as the playa, north of Reno.

For the next week thousands of participants will live together and participate in a range of activities before lighting a giant wooden figure, ‘The Man’, to the ground.

This is the first time that the event is being held since two notable deaths in the Burning Man community, those of its co-founder Harvey and of a man who died at last year’s festival when he ran into a massive fire. 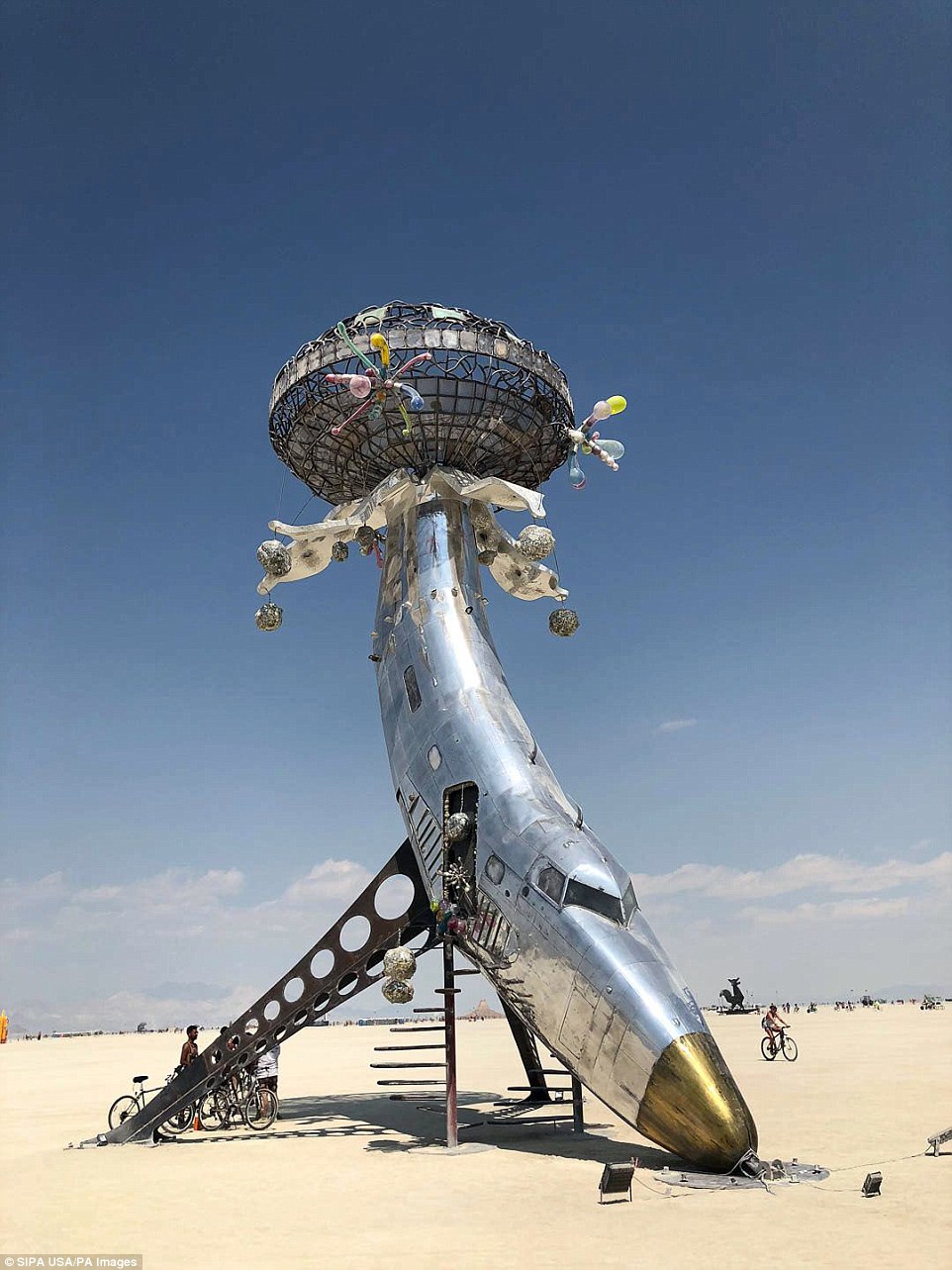 A sculptural airplane glints in the hot Nevada sun as it stands in the playa. A spiral staircase runs on either side of the metal plane leading to two doors that do not open 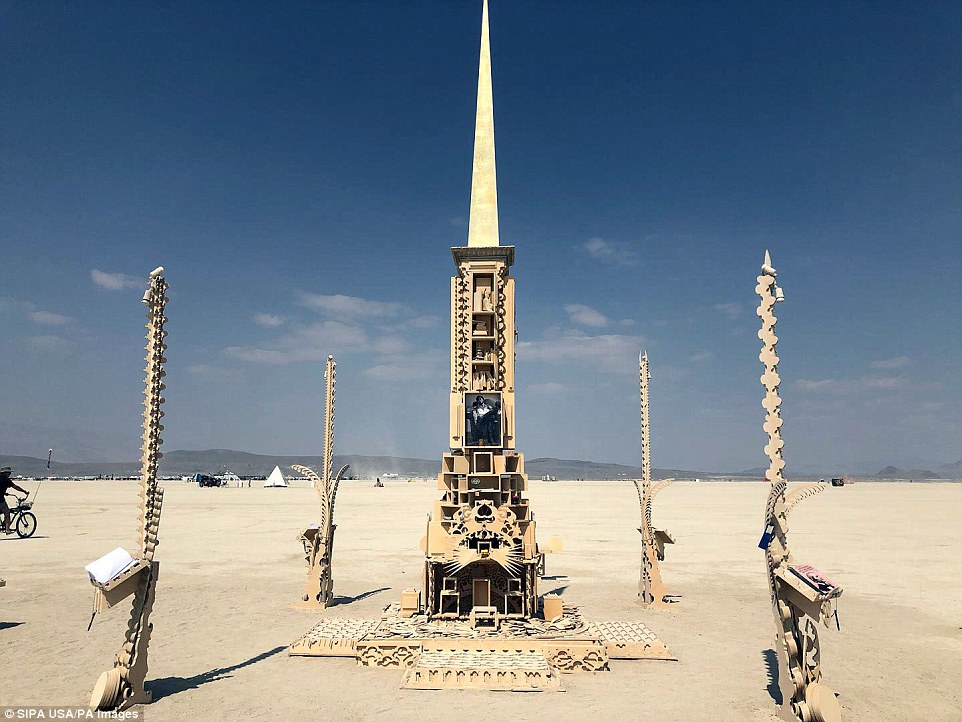 A temple to Larry Harvey, part of the original group who lit an eight-foot wooden model of a man on fire at Baker Beach in San Francisco in 1989, is erected near the large Galaxia temple. Burners write notes and leave personal items on temple shelves 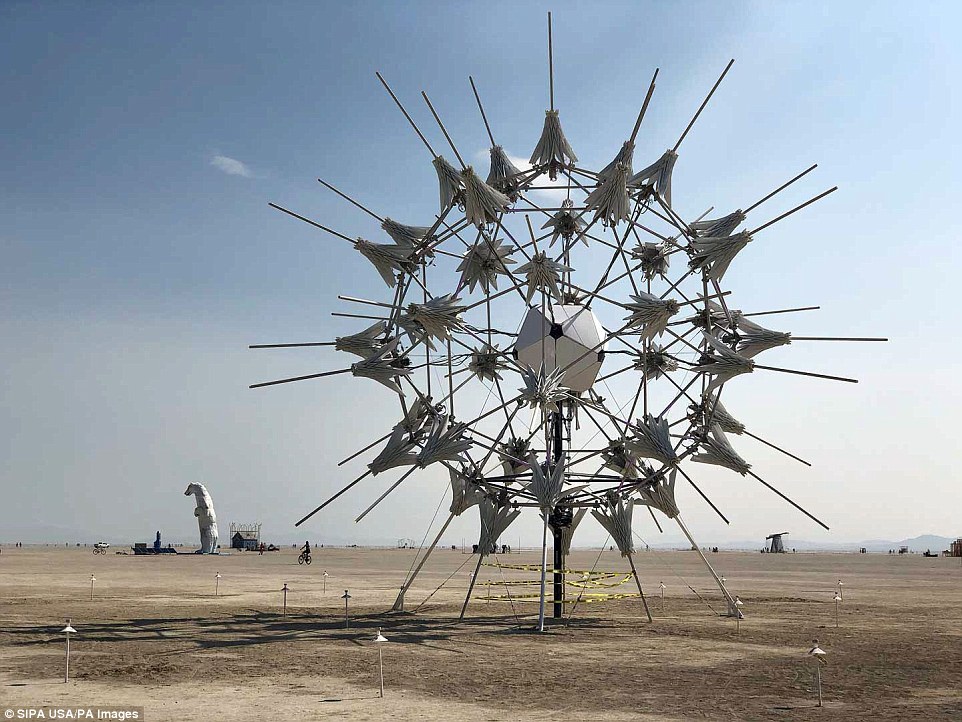 This sculpture, known as RadiaLumia, harkens to radialoria, ‘a tiny protozoa with intricate mineral skeletons that covered the desert thousands of years ago, when it was once the sea floor,’ according to the artist. To the left, a 34-foot tall polar bear sculpture made of white car hoods stands in the desert to represent the disappearance of polar bears because of greenhouse gases emitted by fossil fuel-burning vehicles 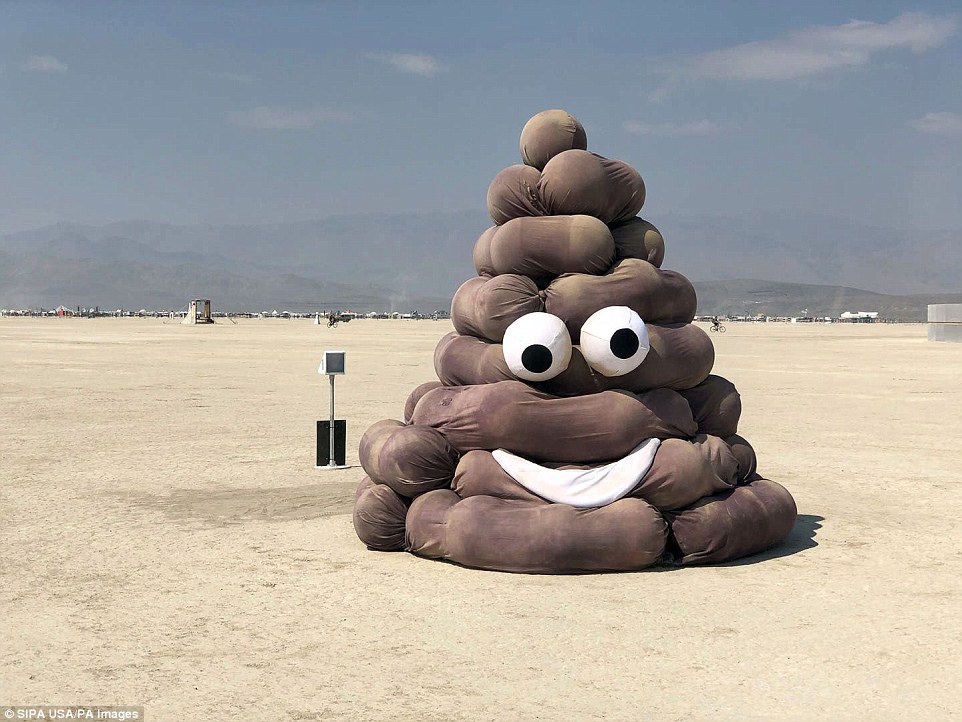 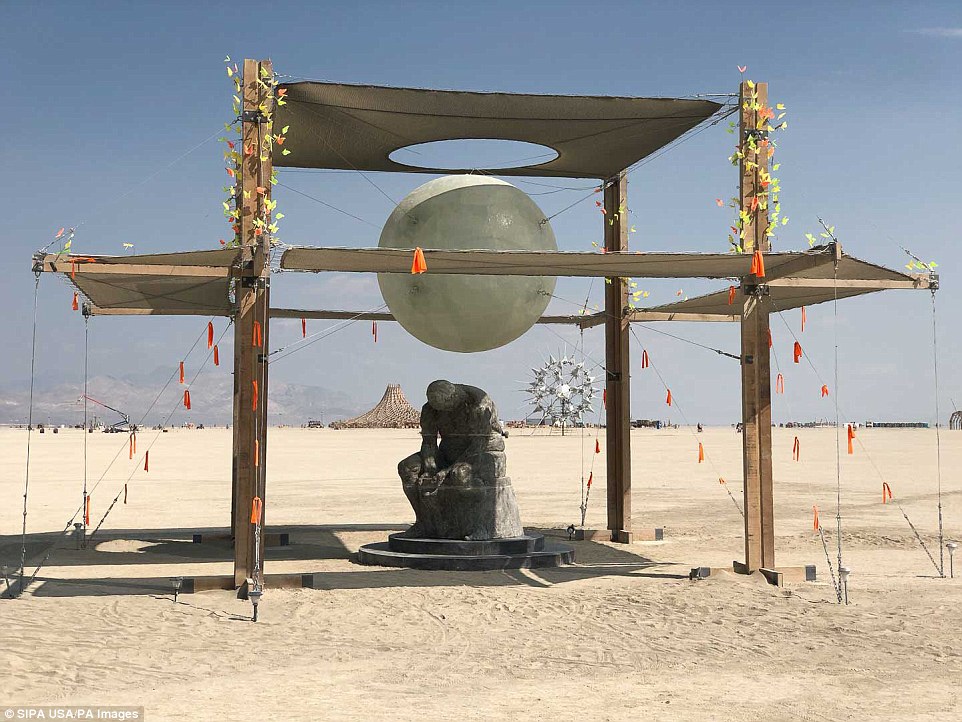 Here, a statue of Atlas sits beneath the sphere of earth, but the earth is no longer on his shoulders

Burning Man has been known for its free-spirited atmosphere where clothing is optional and activities such as the Hug Church and spanking lessons encourage burners to form special connections with one another.

However, following back-to-back reports of rampant sexual harassment in the news over the last year, organizers have been tasked with teaching participants that freedom on the campground doesn’t mean its a free for all.

Attendees will be increasingly scrutinized as they make their way into the desert, with federal officials reportedly beginning an operation to stop and search those travelling in the area for drugs.

Each year dozens participants end up leaving the event in handcuffs, usually for drug possession. 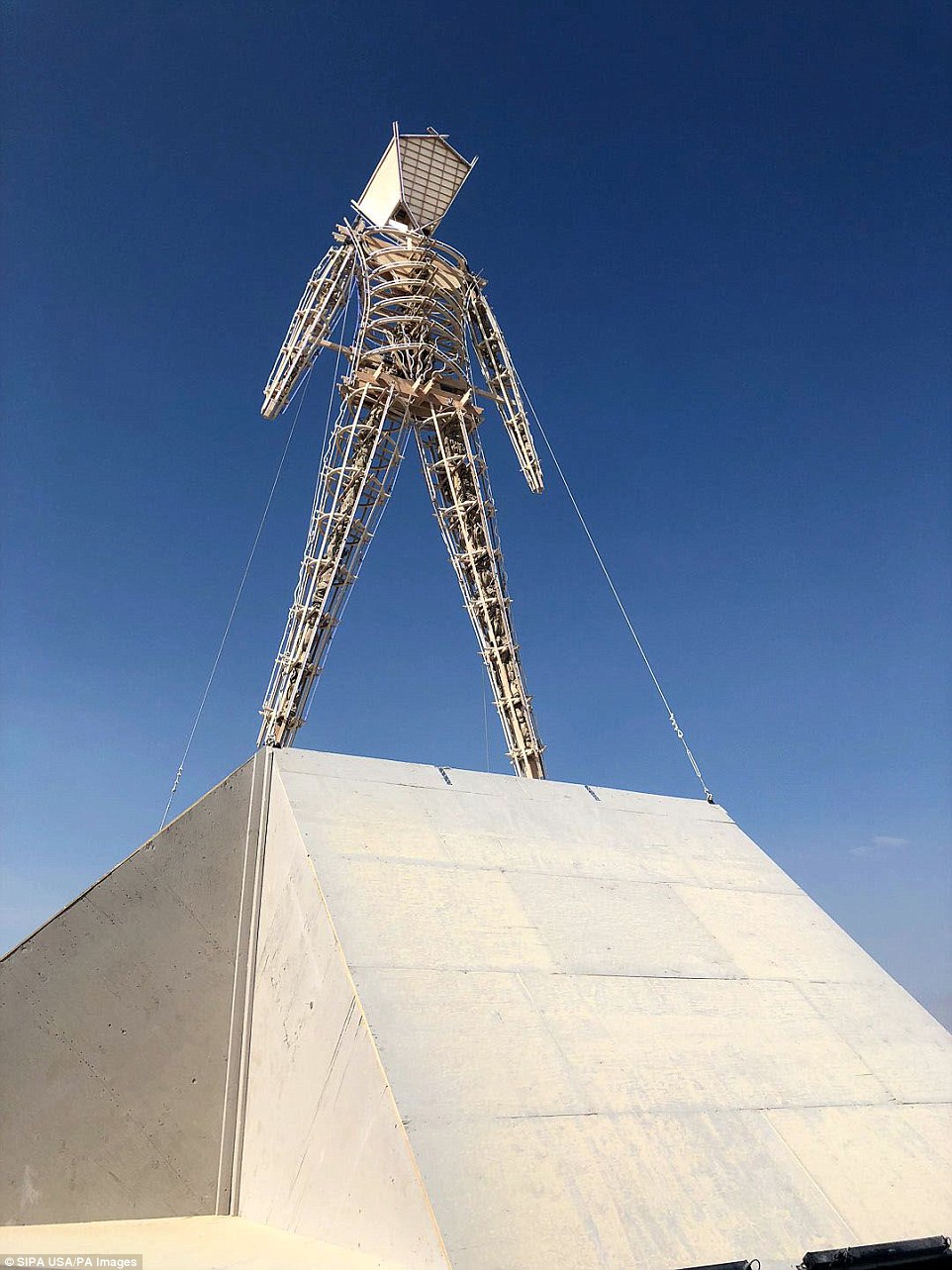 A sculpture of a man stands atop an open air pedestal. Inside the pedestal are murals of robots. On top of the pedestal, numerous pop-culture robots are recreated in various mediums 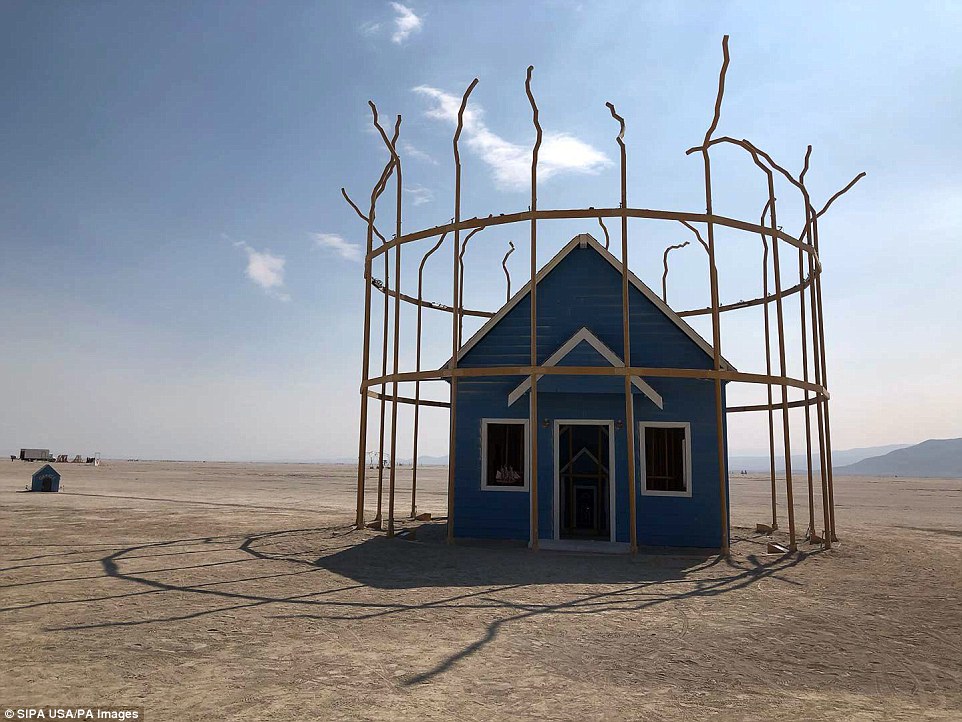 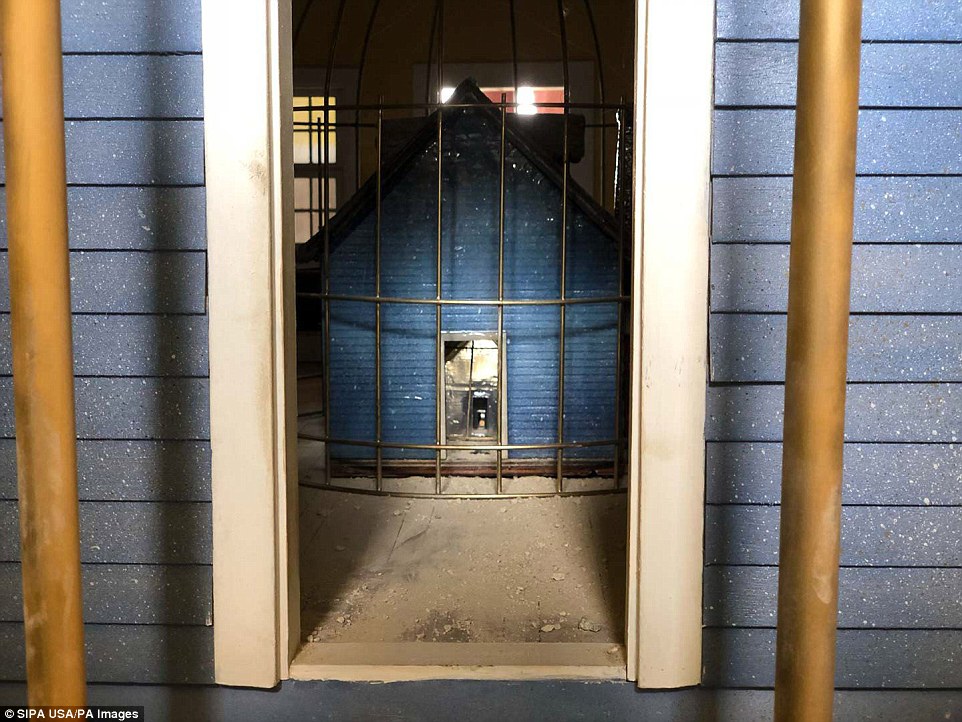 People can walk inside and interact with the vintage elements, then walk inside the house again and find the same pieces until they are no longer able to enter the smallest house within 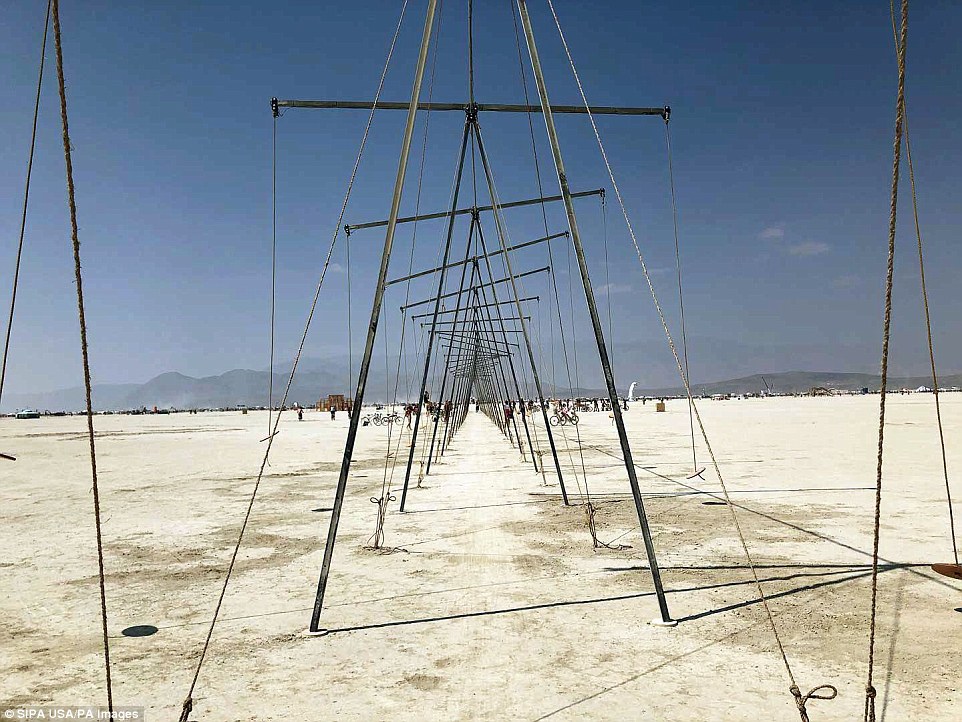 The Seesaw Wave Machine, created by Ryan Elmendorf and Nick Geurts, comprises of 21 seesaw swings connected across a triangular structure. When people play on the swings, other seesaws start to move 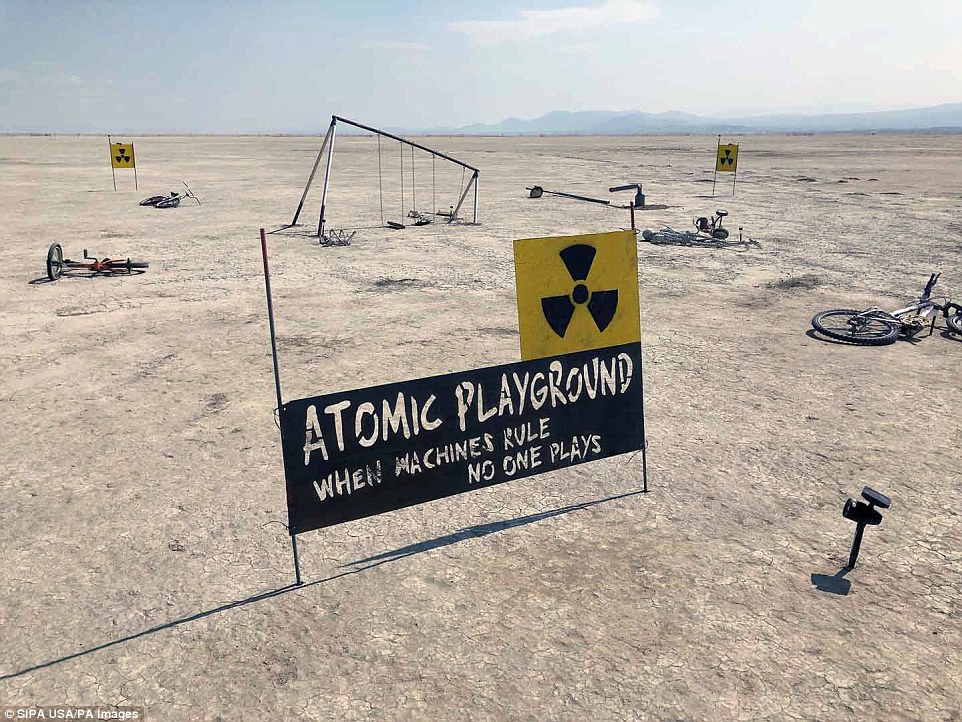 A destroyed playground is scattered with skeletons, bicycles, a swing set and an air raid siren in a scene depicting the destruction of humans by robots. The scene is reminiscent of John Connor’s nuclear holocaust dream in the ‘Terminator’ movies 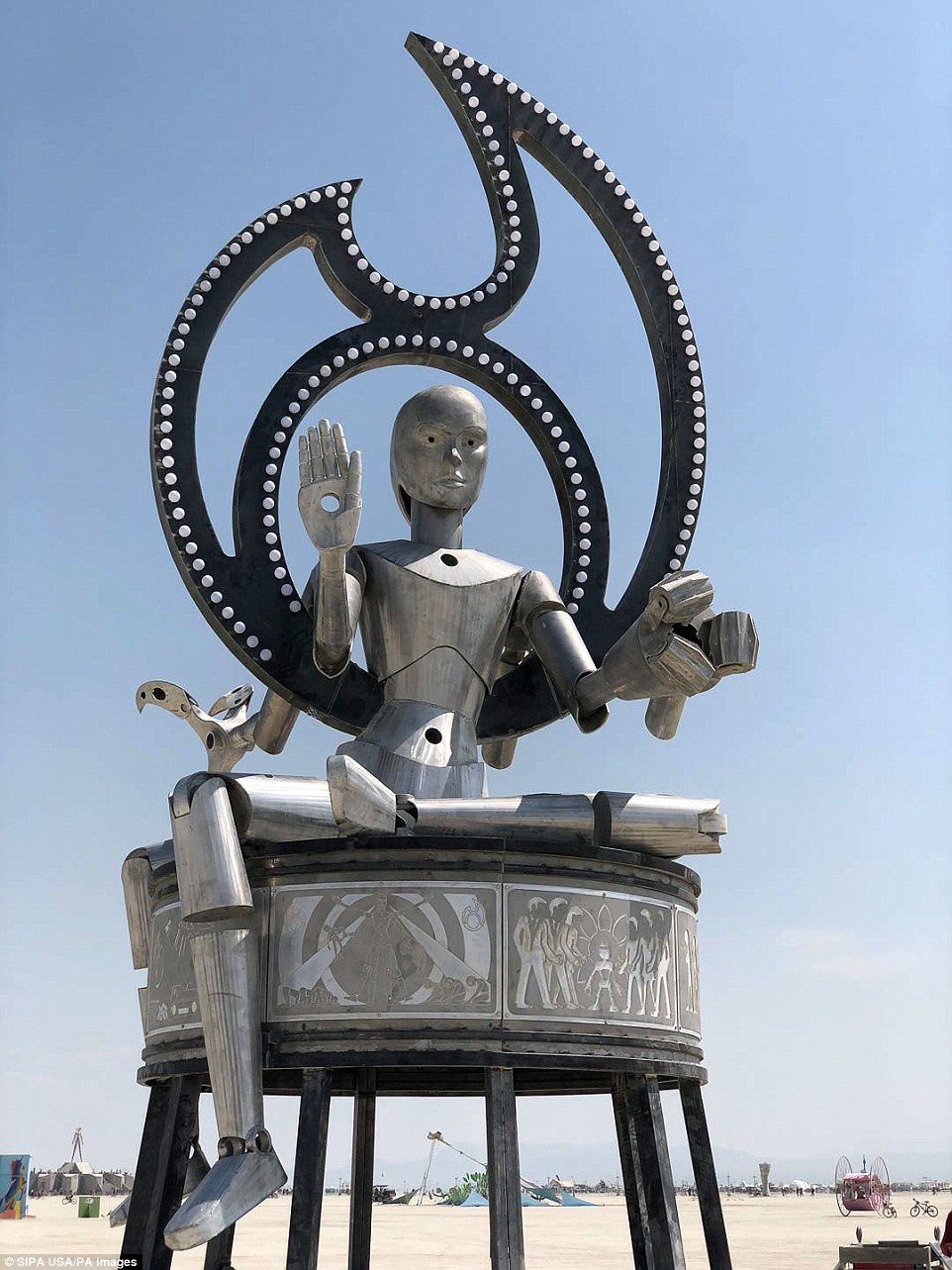 ‘With Open Arms We Welcomed That Which Would Destroy Us’ by Christian Ristow is a large metal sculpture of a Vishnu-like robot god. The pictographs on the sides show the story of man falling in love with phones, then creating robots who replace relationships with humans, then robots providing and doing all for humans before finally overtaking them, subjugating them and becoming their god 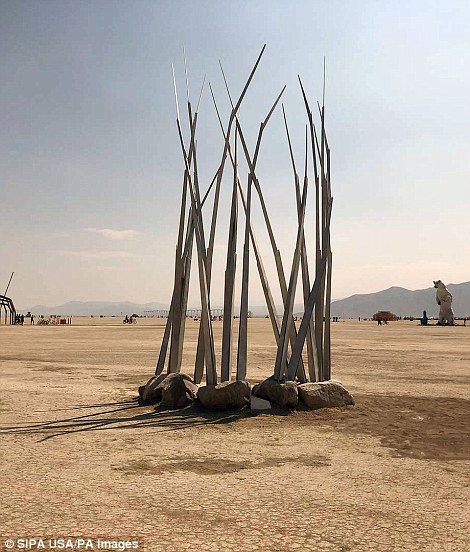 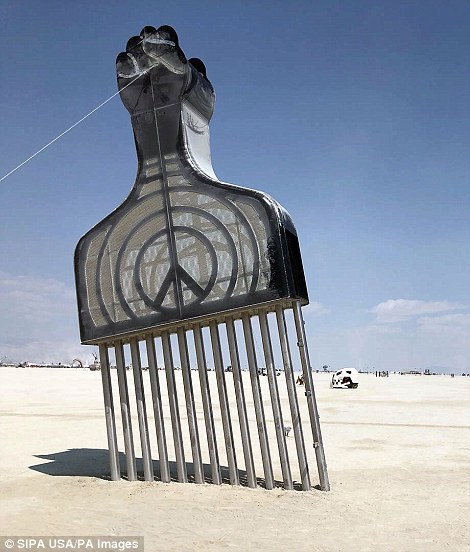 A large, grass-like sculpture ‘grows’ out of the sand (left) and a large ‘afro pick’ juts out to represent ‘a symbol of community and comradeship’. ‘The afro pick exists today as many things to different people: it is worn as adornment, a political emblem and signature of collective identity,’ the artist said. The symbol aims to highlight ideas related to community, strength, perseverance, comradeship, and resistance to oppression, equal justice and belonging

In 1990 the meager festival moved from the beach to the desert, and since then it has grown into one of the most infamous events of the year.

Burning Man is guided by a set of 10 principles, including radical inclusion, self-expression, self-reliance, immediacy and leaving no trace.