A wild bare knuckle brawl brought traffic to a standstill on a major city street as a bus driver and a van driver abandoned their vehicles to slug it out on the road in an ugly road rage incident.

The bus driver, 53, abandoned his passengers on the corner of Goulburn and Elizabeth streets in the Sydney CBD about 12.40pm. He and the 47-year-old van driver, who had also stepped out of his vehicle, then started throwing punches each other, blocking off two lane of traffic in process.

Passengers left stranded on the bus and lunchtime passers-by could only watch on and the fight unfold.

The bus driver can be seen in the video punching and kicking the van driver to the ground.

But the van driver is able to get back to his feet and continue brawling, gradually moving from the middle of the road to the footpath.

One body blow from the van driver knocked the bus driver’s sunglasses – which had been in his shirt pocket – to the ground.

Eventually, two brave witnesses stepped in to separate the pair and stop the fight.

Channel 9 reported that the bus driver was taken to the nearby St Vincent’s hospital to be treated for his injuries. 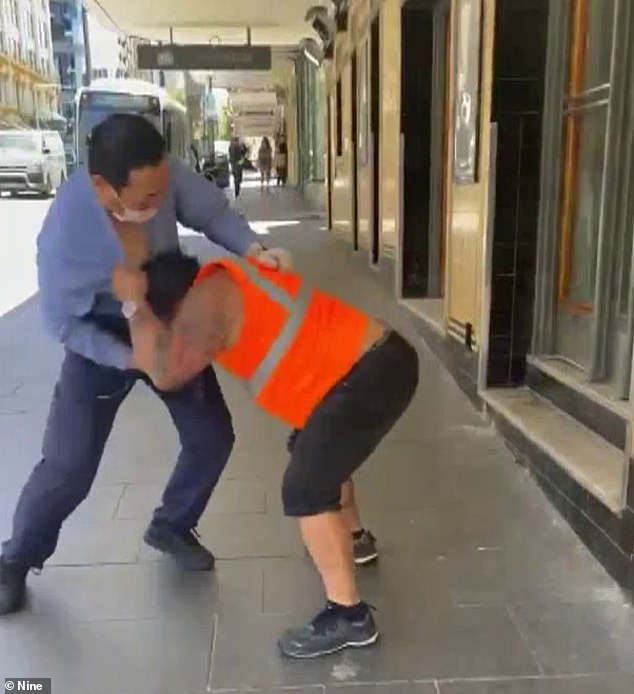 The bus driver, 53, left his passengers stranded on the corner of Goulburn and Elizabeth streets in the Sydney CBD about 12.40pm, as shocked passengers and passers-by watched the dramatic scene unfold

‘The 47-year-old fled the scene. The 53-year-old was taken to hospital suffering facial injuries,’ the police said in a statement.

The investigation is continuing and any witnesses have been urged to contact authorities with statements and dash cam footage.