The ‘butcher’ Iranian President Ebrahim Raisi has appointed two men to his cabinet wanted by Interpol for their alleged involvement in the 1994 bombing of a Jewish centre in Buenos Aires in which 87 innocent people were killed in the deadliest terror attack in Argentina’s history.

Ahmad Vahidi, the Interior Minister who was the leader of the IRGC’s Quds force at the time of the attack, and Mohsen Rezaee, Deputy for Economic Affairs, have both had active Interpol ‘red notice’ since 2007, alongside four other Iranian nationals alleged to be connected to the atrocity.

On July 18, 1994, a van packed with explosives detonated at the Buenos Aires Argentine Israelite Mutual Association building, in the biggest terror atrocity in Argentina.

Hezbollah, an Iran-backed paramilitary group in Lebanon, is suspected of being behind the bombing. However, an Argentine inquiry committee previously ruled that the decision to launch the attack was made by Iran’s leadership.

In a statement, the Argentine Foreign Ministry issued the ‘strongest condemnation’ of the approval of Mr Vahidi and called on the Iranian government to ‘cooperate fully’ with Argentina’s justice system and to allow those accused to be ‘tried by competent courts’.

Their appointments were ‘an affront to the Argentine justice system and the victims of the brutal terrorist attack,’ the statement added. Israel called on the international community to condemn the ‘criminal’ and ‘shameful’ choices. 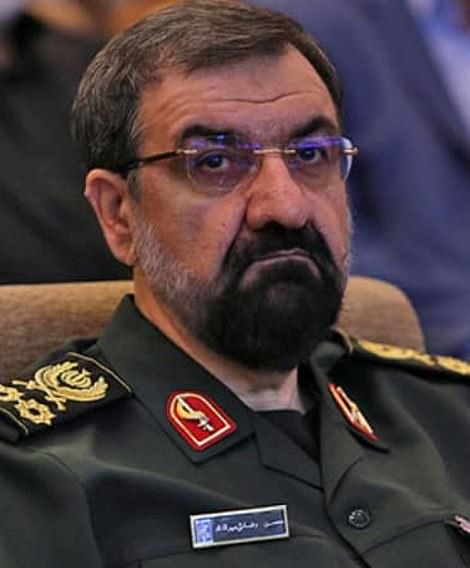 Ahmad Vahidi (left), the new Interrior Minister, and Mohsen Rezaee (right), Deputy for Economic Affairs, have both had active Interpol ‘red notice’ since 2007, alongside four other Iranian nationals alleged to be connected to the atrocity 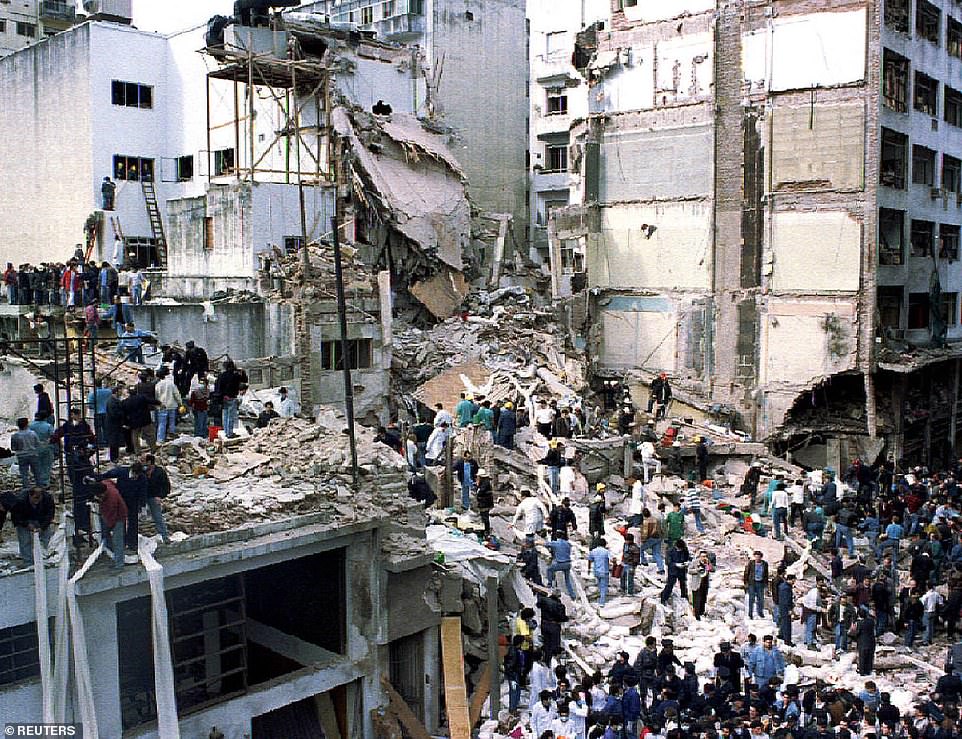 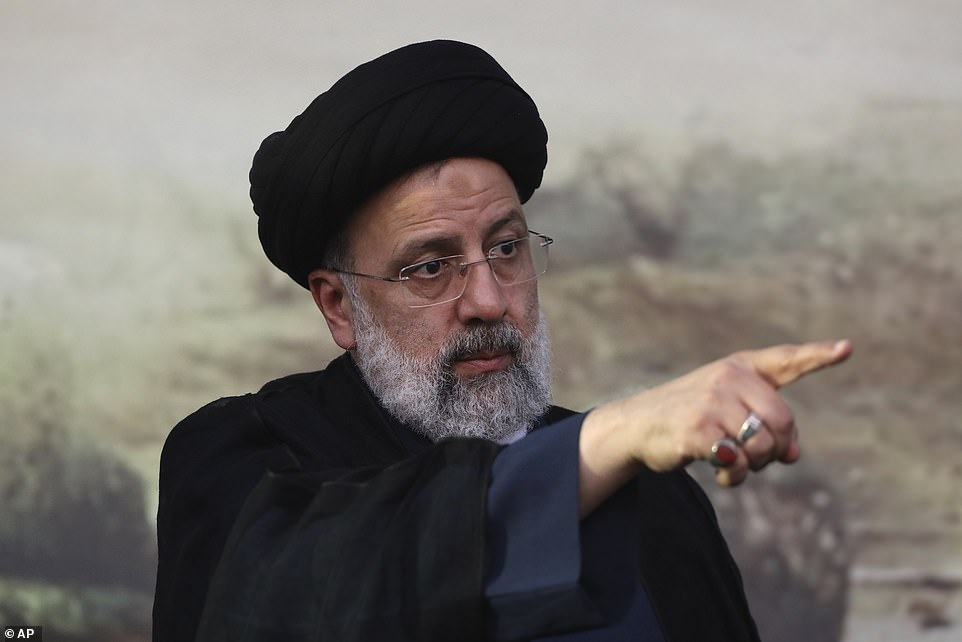 President Ebrahim Raisi is known as ‘the butcher’ for disappearing and executing thousands of opposition prisoners in 1988 while serving as Tehran’s deputy prosecutor and allegedly ordering pregnant woman tortured. He has vowed to remove sanctions imposed by the US 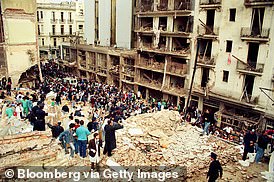 Rescue workers sift through the rubble at the site of a car-bombing at the Asociacion Mutual Israelita Argentina (AMIA) Jewish Community Center in Buenos Aires, Argentina, on July 18, 1994

A suicide bomber drove a van packed with explosives into the Jewish Community Centre building in Buenos Aires on 18 July 1994.

The bombing of the Argentine-Israelite Mutual Aid organization killed 87 people, the deadliest attack of its kind on Argentine soil.

Hezbollah, an Iran-backed paramilitary group in Lebanon, is suspected of being behind the bombing.

However, an Argentine inquiry committee previously ruled that the decision to launch the attack was made by Iran’s leadership.

Several members of President Ebrahim Raisi’s cabinet come from military backgrounds, with more than half of them coming from previous hardline administrations. Several of them were sanctioned by past US administrations. There are no women in the cabinet.

Raisi is known as ‘the butcher’ for disappearing and executing thousands of opposition prisoners in 1988 while serving as Tehran’s deputy prosecutor and allegedly ordering pregnant woman tortured. He has vowed to remove sanctions imposed by the US.

It is thought that at least several thousand and possibly more than 30,000 activists were put to death – hanged by construction cranes in batches of 10 – during the purge.

Raisi won 62 per cent of the votes during the country’s presidential elections this year, with 90 per cent counted so far. Turnout figures of just under 50 per cent were recorded after voting was extended by two hours amid fears that turnout would be lower than 50 per cent.

Exiled opposition groups said that the majority of voters shunned the presidential elections, hailing the boycott which they urged voters to take part in as a blow to the country’s theocratic system.

Raisi will be Iran’s eight president taking over from Rouhani, a moderate who has served the maximum of two consecutive four-year-terms, in August.

Ultimate political power in Iran, since its 1979 revolution toppled the US-backed monarchy, rests with the Supreme Leader. But the President, as the top official of the state bureaucracy, also wields significant influence in fields from industrial policy to foreign affairs.

Ex-president Hassan Rouhani’s key achievement was the landmark 2015 deal with world powers under which Iran pledged to limit its nuclear programme and refrain from acquiring the atomic bomb in return for sanctions relief.

But high hopes for greater prosperity and a reopening to the world were crushed in 2018 when Donald Trump withdrew from the accord and launched an economic and diplomatic ‘maximum pressure’ campaign against Iran.

While Tehran has insisted its nuclear programme is for peaceful purposes only, Trump accused it of secretly seeking the bomb and of destabilising the wider Middle East through armed proxy groups, and hit the country with sanctions.

Raisi took over as the country looks to salvage its nuclear deal with major powers and free itself from the US sanctions which have contributed towards a economic downturn.

It comes as Supreme Leader Ayatollah Ali Khamenei on Saturday accused US President Joe Biden’s administration of making the same demands as his predecessor in talks to revive a nuclear accord.

The multilateral deal that offers Iran relief from sanctions in return for curbs on its nuclear programme was torpedoed by Trump’s decision to withdraw the United States from it in 2018.

A last round of negotiations between Iran and the deal’s remaining parties to revive the 2015 accord concluded in June with no resumption in sight. 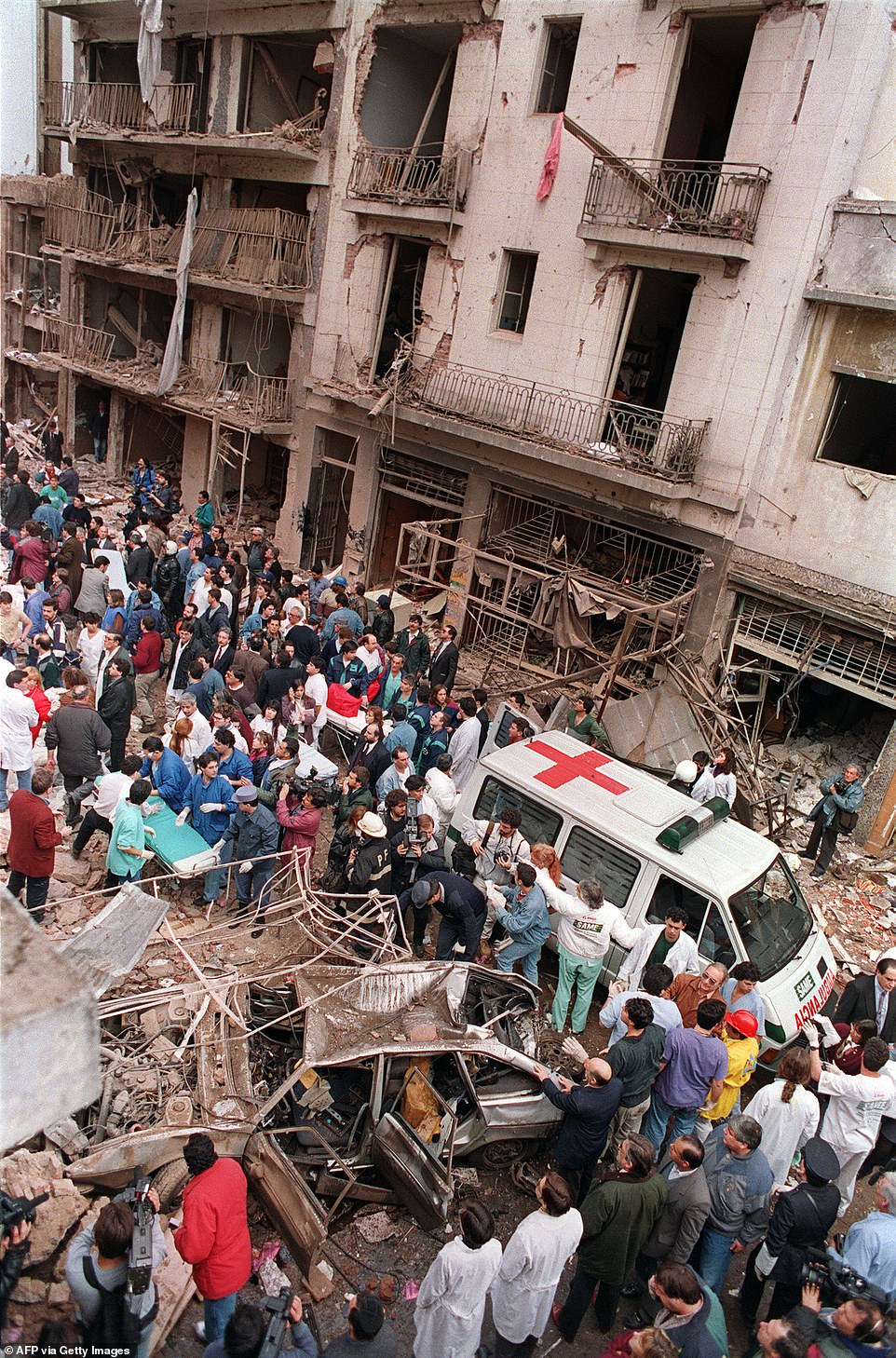 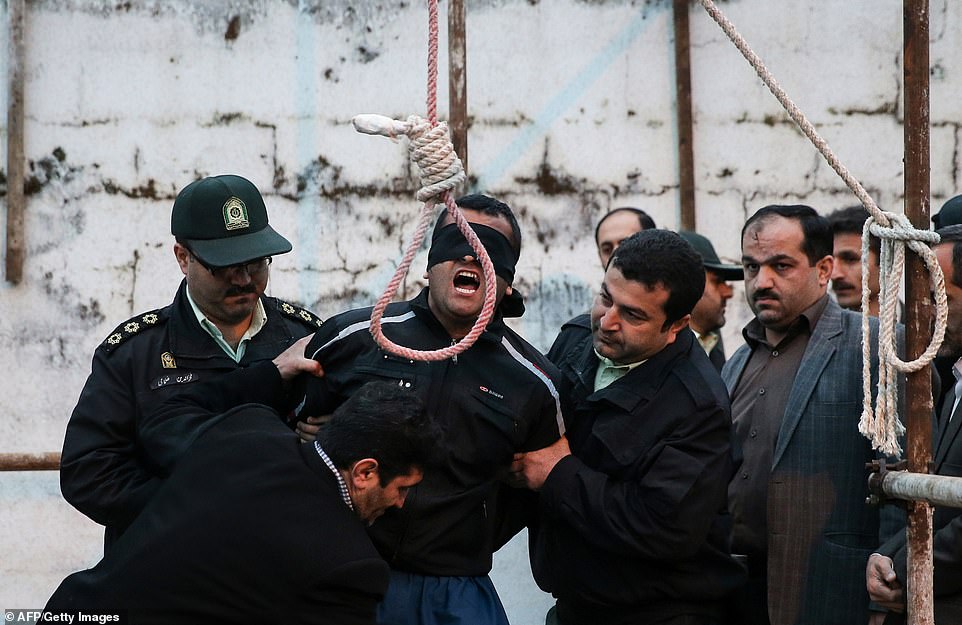 Raisi is known as ‘The Butcher’ for his involvement in the 1988 Death Commissions which sent up to 30,000 Iranian political prisoners to the gallows (file image) 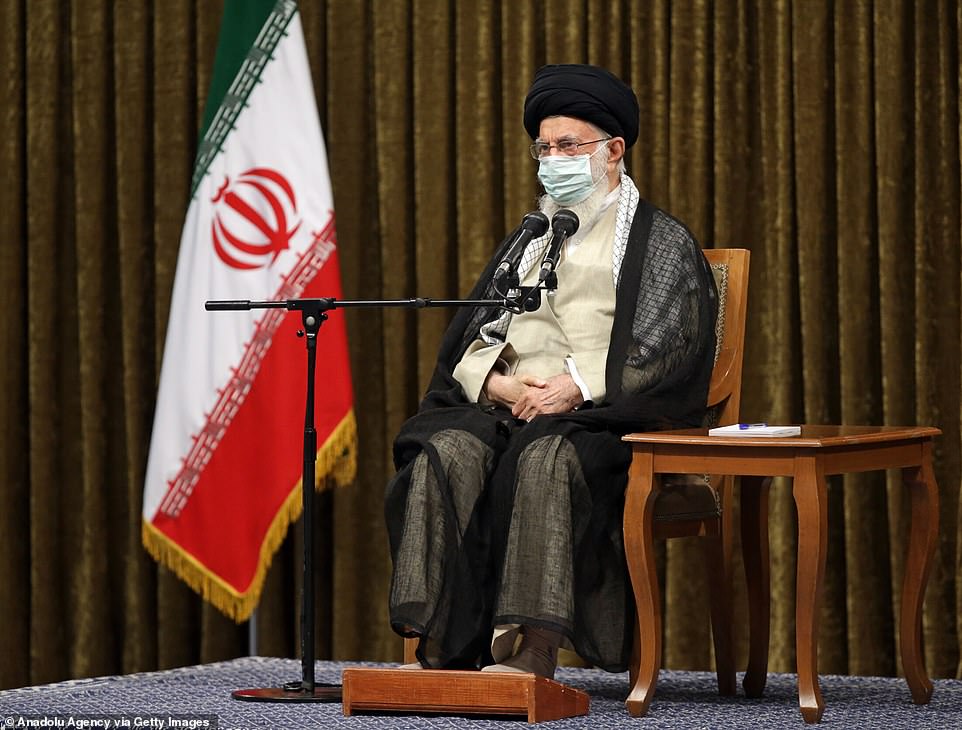 Iran’s Supreme Leader Ayatollah Ali Khamenei speaks during his meeting with members of government formed by President of Iran Ebrahim Raisi in Tehran, Iran on August 28, 2021

‘America’s current administration is no different from the previous one because what it demands from Iran on the nuclear issue is the same thing that Trump demanded,’ Khamenei said in televised remarks.

He said that Biden’s administration wants ‘the same thing today, it’s no different. (Trump) said it in one way and these (say it) in different words.’

‘The Americans truly have no shame on the nuclear issue, and even though they withdrew from the JCPOA… they now talk in a way and make demands as it was (Iran) that withdrew,’ he said, quoted by his official website in reference to the deal by its official name, the Joint Comprehensive Plan of Action.

Khamenei made the remarks in a meeting with Raisi’s newly formed cabinet, during which he acknowledged public trust in government had been ‘damaged’.

A year after Trump’s decision to withdraw from the deal and impose sanctions on Iran, the Islamic republic retaliated by gradually waiving most of the key nuclear commitments that it had accepted under the agreement.

Six rounds of nuclear talks between Iran and world powers – with the US indirectly taking part – were held in Vienna between April and June. The last round concluded on June 20, with no date set for another.

‘Behind the scenes of America’s foreign policy, there is a predator wolf that sometimes changes to a cunning fox,’ Khamenei said.

Khamenei’s remarks came after a senior security official in Tehran said Iran reserves the right to a ‘reciprocal response’ to Washington, after what it deemed as threats by Biden.