The well-connected father of Edwin ‘Buzz’ Aldrin lobbied behind the scenes to have him say the first words from the moon, a new book claims.

As lunar module pilot on the famous Apollo 11 mission, Aldrin set foot on the moon’s surface on July 21 1969, nine minutes after mission commander Neil Armstrong, who famously declared: ‘That’s one small step for man, one giant leap for mankind.’

NASA chiefs chose Armstrong for the honor of saying those immortal words, despite a covert campaign pushing for Aldrin, claims Jim Donovan in his new book Shoot For The Moon.

Apollo 11 astronauts Mike Collins (left), Neil Armstrong (centre), and Edwin ‘Buzz’ Aldrin, in front of the Lunar Landing Module Simulator at the Kennedy Space Centre, USA, prior to their landing on the moon. A new book by Jim Donovan reveals that there was a behind the scenes campaign by Aldrin and his father that attempted to ensure he would take the first steps on the moon

Both Aldrin and his father Edwin Snr, who was an aviator and officer in the U.S Army during the First and Second World Wars, pushed for the mission plans to decree that the lunar module pilot would exit before the commander.

‘[Aldrin] lobbied behind the scenes after finding out that Neil Armstrong, who was quiet and modest in demeanour and cool under pressure, had been chosen to be the first,’ Donovan said.

The decision had been closely watched since the first press conference following the announcement of the Apollo 11 crew, when a reporter asked: ‘Which one of you gentlemen will be the first man to step onto the lunar surface?’ 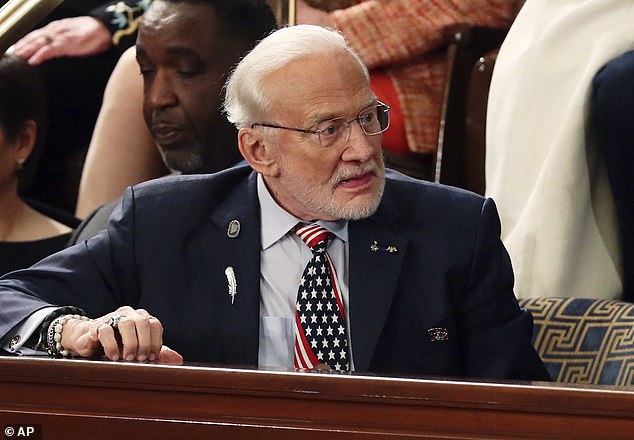 Astronaut Buzz Aldrin arrives for President Donald Trump’s State of the Union address in February 2019. He was reportedly going to be the first man on the moon but NASA chiefs chose ‘modest’ Neil Armstrong instead

Donald Kent ‘Deke’ Slayton, who oversaw NASA’s crew assignments, replied that it had not yet been decided, while Armstrong added that it was ‘not based on individual desire’.

Donovan writes that in February 1969, a ‘top NASA official’ told the Chicago Daily News that Aldrin would be the first to exit.

Although newspapers throughout the country ran the same story, at the next press conference NASA claimed the decision had not yet been made. 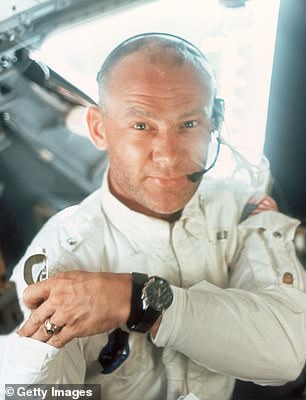 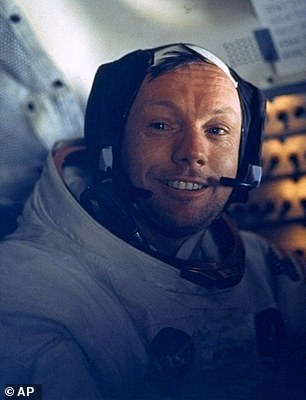 Finally, on April 14, it was announced the Armstrong would be ‘the first man out after the moon landing’. One reason given was that the hatch of the spacecraft’s cabin opened inwards and rightwards, making it difficult for the lunar module pilot, stationed on the right-hand side, to exit first.

Slayton added, ‘Secondly, just on a pure protocol basis, I figured the commander ought to be the first guy out.’

‘When Aldrin was told that since Neil had seniority, it was only right that he be the first, Aldrin would later claim that this satisfied him – it had been the ambiguity, he said, that he found unsettling,’ Donovan said.

But Aldrin’s wife Joan admitted that privately he was ‘devastated’.

Donovan suggests that Armstrong was a more popular figure than Aldrin among the other astronauts, as although Aldrin was highly respected for his scientific genius, he was a loner who acknowledged that he did not work well as part of a team. 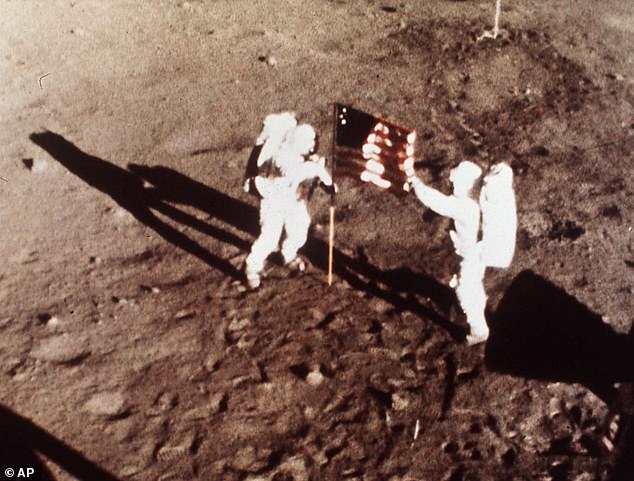 Armstrong was also considered to be a modest and humble, and the chiefs wanted a calm, quiet person to perform the historical spacewalk.

‘Buzz Aldrin was brilliant but troubled,’ he said.

‘Fellow astronauts and their wives were terrified at the prospect of sitting next to him at dinner, since he would expound on orbital mechanics for hours at a time.

‘Armstrong and Aldrin spent hundreds of hours standing next to each other in the lunar module simulator, just as they would in the actual Lunar Module.

‘But in between practice landings they would sit on a shelf behind them.

‘Other Apollo crews practising for a landing, talked and joked during these breaks, but Armstrong and Aldrin said so little to each other that simulation supervisors thought they had fallen asleep.’