Byron Bay local reveals what she hates about tourists

A young Australian living in Byron Bay has revealed the top five things about tourists that instantly give her ‘the ick’.

Georgia Copeland listed the points in a two-minute TikTok video and couldn’t help but laugh at some of the ‘annoying’ habits of visitors.

Over the last few years Byron Bay has become a go-to beach holiday destination which has caused a rise in rent, house prices and food prices, leaving locals struggling.

Georgia also complained about the ‘Byron tax’ and high expense for renting to live in the area.

Young Aussie Georgia Copeland (pictured) listed what she hates most about tourists who visit Byron Bay. The list included bad drivers, hiking in sandals and causing prices to spike

In the clip Georgia said: ‘My number one ick is when tourists come here and they do the lighthouse [walk] in their longs or sandals. And it’s not a short walk, it’s not a very easy walk. Please, wear runners.’

The Cape Byron walking track is around 3.7km and includes many stairs, and short, steep inclines. Once at the top it’s a stunning location to view the seaside.

Next, Georgia claims the tourist who visit Byron are awful drivers.

‘Oh my god, they’re so bad! They don’t indicate, you don’t know where they’re going, they’re terrible at parking, they’re worse than Queensland drivers,’ she said.

‘I feel like I nearly get into an accident every day – and it’s not because I’m a bad driver.’

And when it comes to driving, Georgia dubbed tourists as ‘selfish’ because they take ‘all the car parks’ at the beach.

She claims the parks closest to the beach should only be used if you’re surfing – but many don’t abide to this unwritten rule and take up the parks only to just ‘sit on the beach’.

‘Then we need to wait half an hour [for a park] because there’s people down at the beach taking photos or just chilling.. that’s just selfish and it annoys me,’ she said. 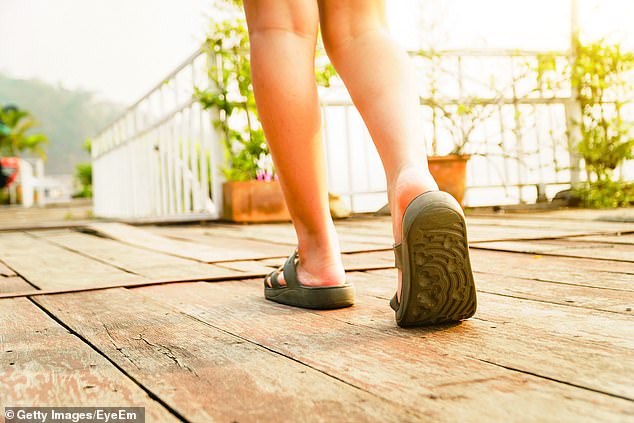 In the clip Georgia said: ‘My number one ick is when tourists come here and they do the lighthouse [walk] in their longs or sandals. And it’s not a short walk, it’s not a very easy walk. Please, wear runners.’ The Cape Byron walking track is around 3.7km and includes many stairs, and short, steep inclines (stock image)

Georgie also highlighted how expensive common takeaway options are because of the high numbers of people.

She claims a humble bacon and egg roll can cost as much as $18.

‘Just for egg, bacon and probably a Coles roll with sauce for that price, and people pay it but it’s just ridiculous,’ Georgia said.

She also gets a major ick feeling when she sees people taking photos of their partner walking along the beach.

Since Byron has become a huge tourist attraction and place to visit, the price of goods has skyrocketed.

What at the five ‘icks’ about Byron Bay?

2. Tourist take up all the car parks near the beach

3. Rent is just as expensive as Sydney

5. Tourist who visit are terrible drivers

‘Everywhere you go, think of normal prices and make it more expensive. That’s Byron. Even if you’re at Woolies, add a couple extra dollars to literally everything,’ she said.

Lastly Georgia had a dig at landlords who charge up to $400 per week to rent out a room in a house.

‘$400!? I don’t even have to explain that. People will probably pay that as well – it’s just disgusting,’ she said.

The TikTok video has since been viewed more than 8000 times and others couldn’t agree more.

‘I used to live in Byron and I felt this so hard,’ one person wrote.