Ministers are split over whether to start easing lockdown restrictions amid concerns of a second wave of new coronavirus cases if freedoms are restored too soon.

While Boris Johnson recuperates at his countryside retreat, Chequers, a clear fissure has developed in the Cabinet over the timeframe for easing the measures imposed by the Prime Minister on March 23, as reported by The Guardian.

The ‘hawks’, consisting of Chancellor Rishi Sunak, Liz Truss, the Trade Secretary, and Cabinet Office minister Michael Gove, are thought to be concerned about the implications of a long-term shut down of the UK economy, and want to ease restrictions sooner.

But the ‘doves’, who include the PM, and Health Secretary Matt Hancock, are thought to be more cautious, and much like Germany’s Chancellor Angela Merkel, they are concerned about a second wave of the virus overwhelming the country. 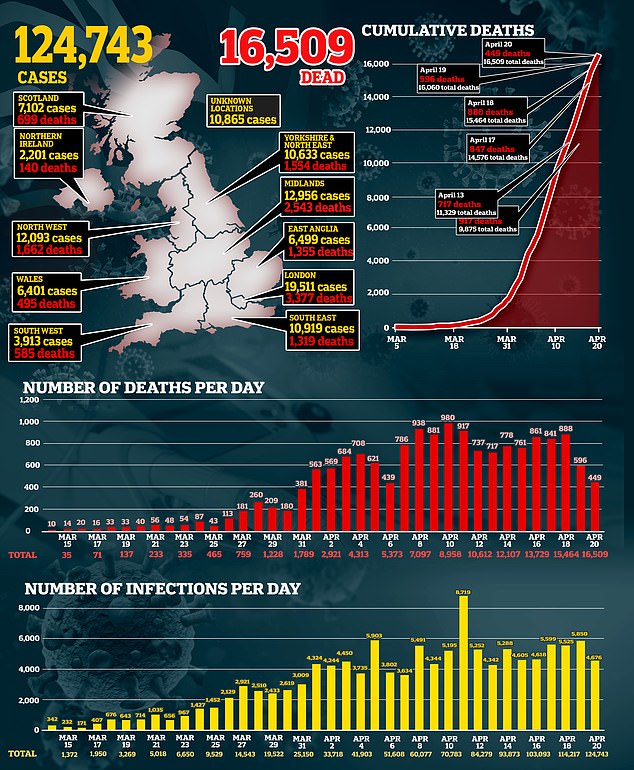 Mr Johnson is particularly concerned a second wave could leave the country on its knees, both from a health and economic standpoint.

While Mr Hancock has been clear in press conferences throughout the crisis he wants the lockdown to continue to ease the burden on an under-pressure NHS.

It came after the UK yesterday announced 449 more coronavirus deaths – the fewest for a fortnight – taking Britain’s total death toll to 16,509.

The latest advice from the Scientific Advisory Group for Emergencies (SAGE) is that the loosening of lockdown restrictions could not be done without increasing the transmission for each person infected – known as R.

A cabinet source told The Guardian: ‘The scientists are very clear, there’s no loosening of measures we can do that won’t bring the R back over 1.

‘There may be some small changes on their own that could do it, but the question is whether behaviours change in other ways and push the R above 1.

‘The second you have the R above 1 then you’re back to exponential growth.

‘We did have R of about three. And we’ve driven that down. But even a small increase in transmission could put you above 1.’

Other ministers, such as Foreign Secretary Dominic Raab, Business Secretary Alok Sharma and Gavin Williamson, Education Secretary, are set in between the two camps, and are yet to be won over by either.

The figures released yesterday showed England declared 429 deaths and a further 20 were confirmed across Scotland, Wales and Northern Ireland. And 4,676 more people have tested positive for the virus, taking the total number of patients to 124,743.

Monday’s death toll is a fall on the 596 fatalities announced on Sunday, and half as many as the day before that (888).

It is the lowest number for a fortnight, since April 6 when 439 victims were confirmed.

Although the statistics are known to drop after a weekend, the sharp fall adds to evidence that the peak of the UK’s epidemic has blown over.

It came after leading expert at the University of Oxford has argued the peak was actually about a month ago, a week before lockdown started on March 23, and that the draconian measures people are now living with were unnecessary.

Professor Carl Heneghan claims data shows infection rates halved after the Government launched a public information campaign on March 16 urging people to wash their hands and keep two metres (6’6″) away from others.

He said ministers ‘lost sight’ of the evidence and rushed into a nationwide quarantine six days later after being instructed by scientific advisers who he claims have been ‘consistently wrong’ during the crisis.

Professor Heneghan hailed Sweden – which has not enforced a lockdown despite fierce criticism – for ‘holding its nerve’ and avoiding a ‘doomsday scenario’.

The country has recorded just 392 new patients and 40 deaths today, approximately 10 per cent of the UK’s figures. Britain’s diagnoses have not been announced yet.

In separate research, the Oxford professor said he estimates that the true death rate among people who catch the virus is between 0.1 and 0.36 per cent, considerably lower than the 13 per cent currently playing out in the UK.