A father who witnessed a mother plunge 30 metres from a fairground ride has revealed parents took their kids to ‘gawk’ at the critically injured woman.

The 25-year-old woman fell from The Hangover ride at the Cairns ShowFest in the city’s Parramatta Park at 5.30pm on Saturday before becoming ‘entrapped’.

Father Kurt Wanless took his two children and a neighbour’s child to the ShowFest and saw the woman plunge from the ride.

Father Kurt Wanless said parents took their children to look at a critically injured woman when she became trapped after falling 30 metres from the The Hangover ride at the Cairns ShowFest in the city’s Parramatta Park at 5:30pm on Saturday

Speaking to Daily Mail Australia, Mr Wanless said parents were taking their children to see the trapped woman after she fell from the ride.

‘People were taking their kids up to see, which is pretty disgusting. I don’t want my kids to have that in their heads,’ he said.

‘I grabbed my kids when they put their sheet across because I thought she might have died. When we left, more police were coming in.

‘I thought they would shut down the whole show. When something like that happens, you should call it quits. Get the people out so emergency services can cordon off the area. But they kept it going.’

Video taken by Mr Wanless shows people gathering around the ride to see what was happening while music continued to blare.

‘It’s a shame. There’s everyone gawking wondering what the f*** is going on,’ Mr Wanless said in the clip.

‘A poor lady fell out of that ride up the top, broke her back and this is what’s going on. The ride was upside down, she fell from the top.’

The Hangover ride swings people through the air on pendulum arms that rotate a full 360 degrees. 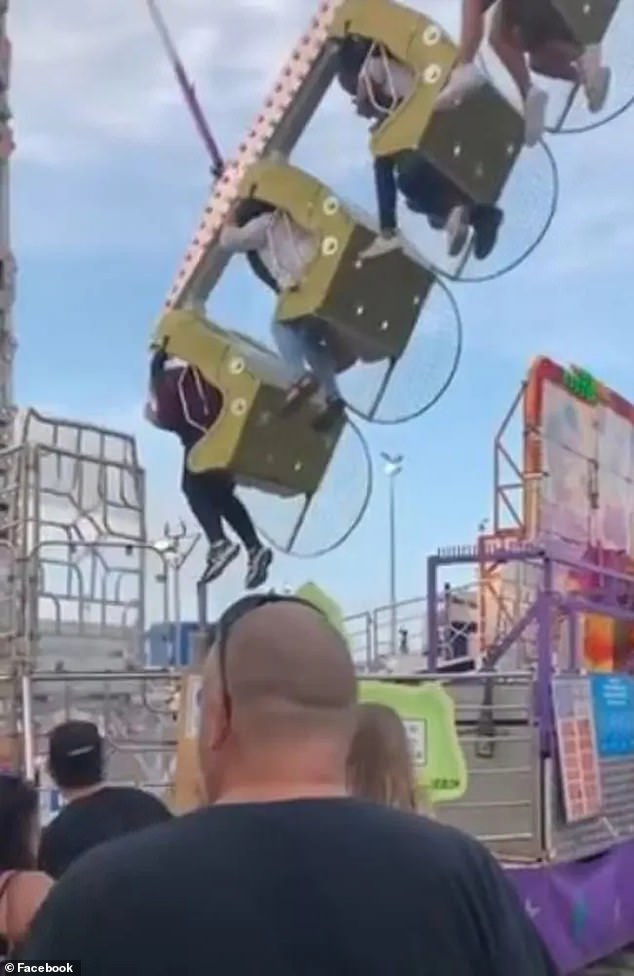 The 25-year-old woman fell from The Hangover ride at the Cairns ShowFest in the city’s Parramatta Park at 5:30pm on Saturday before becoming ‘entrapped’

Another witness Darnell Addo, 16, said the ride continued to spin around even after the woman had fallen.

‘They couldn’t stop the ride. He (the operator) said “I’m trying to, it’s on a timer”,’ Mr Addo told the Cairns Post.

‘No one knew about it except for about eight people by the side, they started screaming.

‘Some show ground people came and asked what had happened, then the ambulance came and everybody started crowding it.’

The moment the woman fell was captured on video and posted to Facebook but removed out of respect for her distraught family.

Queensland Ambulance and Queensland Fire and Emergency Services freed the woman but she had already suffered ‘significant head and spinal injuries’.

‘The woman was freed and treated for significant head and spinal injuries. She was transported in a critical condition with a critical care paramedic and flight doctor to Cairns Hospital,’ she said.

A Cairns Hospital spokeswoman said the woman is still in a critical condition.

‘A nurse has informed me that she will likely remain in critical condition overnight,’ she said. 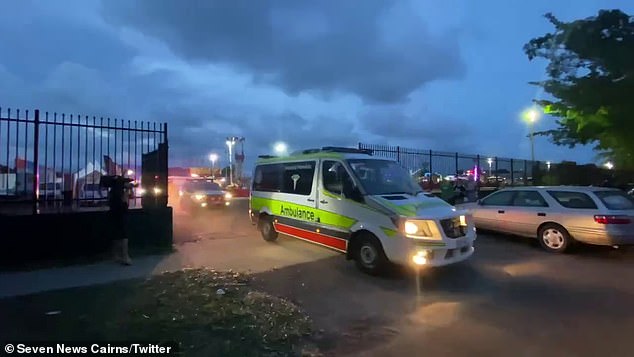 Ambulance crews leave the Cairns ShowFest. The woman was transported to hospital and remains in a critical condition 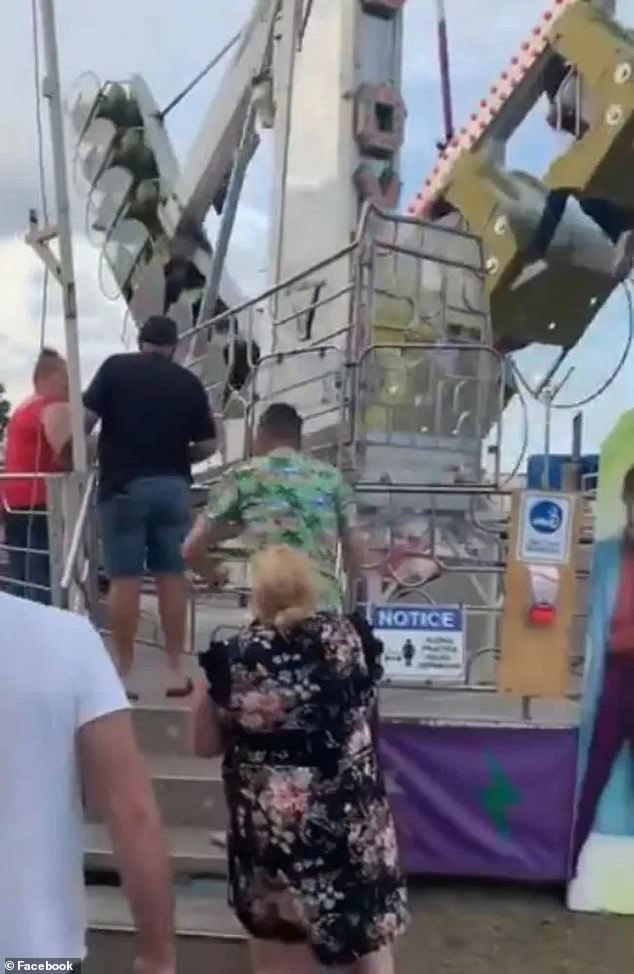 A crowd gathered around the ride when the woman became trapped. Witness Kurt Wanless said parents were taking their children to see the woman trapped in the ride after she fell

Mr Wanless also witnessed the woman falling from the ride.

‘I was getting a Dagwood Dog and I saw her mid flight in the last few metres before she hit the ground. My daughter saw her land,’ Mr Wanless told Daily Mail Australia.

‘There was a young bloke and a girl, about 18, who looked pretty shaken up. They were crying. I think they might have been her friends or family.’

Mr Wanless said the woman fell from the front seat of The Hangover ride, which his children had ridden just before.

‘My kids went on that ride (The Hangover) on the ride before. They were in the middle and I wanted them to sit in the front where the woman came out of,’ he said.

Daily Mail Australia has contacted ShowFest Australia promoter Bryan Loft for comment but has not yet received a response. 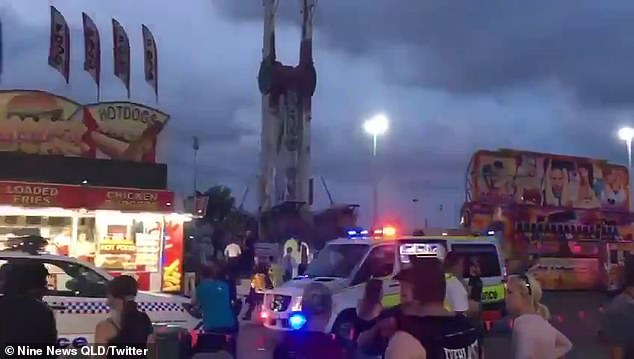