Cairns man had sex with young girl after she begged him

A 40-year-old man who ‘succumbed’ to a vulnerable 15-year-old girl’s advances and had sex with her two times will spend the next two months behind bars.

John Aruba, 40, had only met the teenage girl a few months earlier when she ‘begged’ him to sleep with her after drinking at his Cairns home.

‘No I can’t … you’re going to get me locked up,’ he said to the girl, according toThe Cairns Post.

The girl (stock image) had been drinking at his house when she started begging him to have sex with her. After initially refusing he agreed and then slept with her again one week later.

A week later the court heard the girl approached him again asking for sex. He asked her if it would be the last time and she agreed.

Aruba had been working away from his children and partner and was lonely when he slept with the young girl, The Cairns District Court heard.

‘She started to flirt with him, he was lonely and he was very flattered,’ said Defense barrister, Michael Dalton.

‘When the complainant invited him to have sex with her he has succumbed. He feels guilty for succumbing and he’s sorry,’ he told the court.

Aruba also breached bail after contacting the girl, a move that was against his bail conditions, Pat Nevard, for Crown Prosecutions said.

He pleaded guilty to two counts each of unlawful carnal knowledge and indecent treatment of a child under 16.

Unlawful carnal knowledge, or sexual intercourse, has a maximum penalty of 14 years to life imprisonment. Indecent treatment of a child under 16 can carry a 20 year sentence. 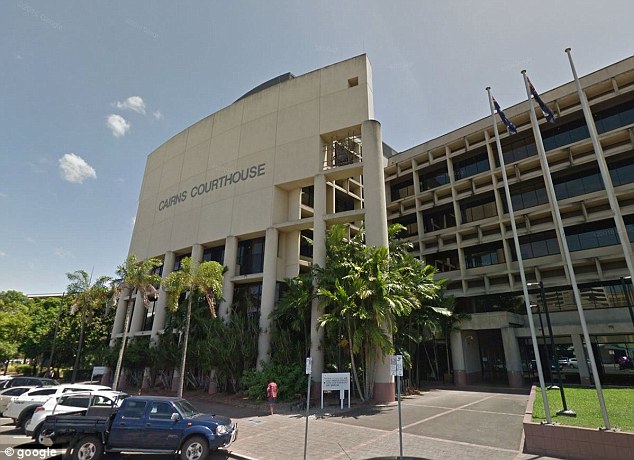 The Cairns court house where John Walter Aruba, 40, appeared after having sex with a 15-year-old girl.