California man, 24, is sentenced to 180 DAYS in jail for sending a fake mass shooting warning to the Los Angeles County Fair so he could avoid going with his parents

A California man was sentenced to several months of jail time and probation after  emailing a fake mass shooting warning to get out going to the Los Angeles County Fair with his family.

Erik Villaseñor, 24, of Los Angeles was charged with one misdemeanor count of false report of an emergency after pleading contest on Friday.

Villaseñor negotiated a plea agreement with authorities, according to a statement from the Los Angeles County District Attorney’s Office.

Erik Villaseñor, 24, was charged with one misdemeanor count of false report of an emergency after sending a fake mass shooting warning to the Los Angeles County Fair (pictured)

As a part of his sentencing, Villaseñor is barred from the fairgrounds for three years.

He is also prohibited from ‘possessing or owning deadly and dangerous weapons, subject to search and seizure conditions and prohibited from providing false information to law enforcement officials.’

Villaseñor will be required to pay $13, 346 in restitution to the Pomona Police Department.

On September 13, Villaseñor wrote an email to the Los Angeles County Fair alleging a mass shooting would take place on September 15.

The email read: ‘Hello, I was told that someone was planning on doing a mass shooting on Sunday at the Fairgrounds. I just wanted to inform you guys already.’

Villaseñor admitted he sent the email because his parents planned on taking him to the county fair and he didn’t want to go.

‘Through interviews, they were able to determine that he did send that statement to the fair, and ultimately determined it was a hoax,’ Olivieri Jr. said. 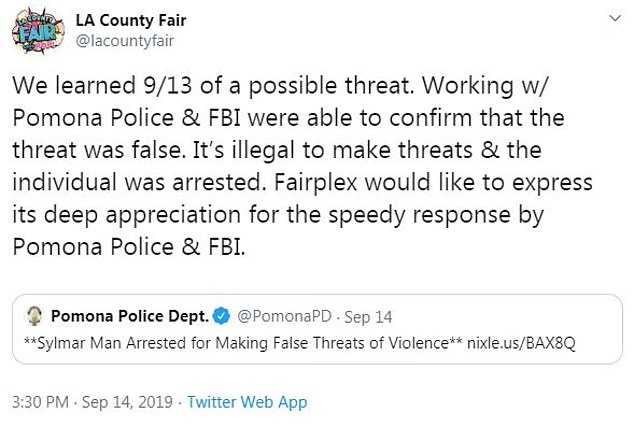 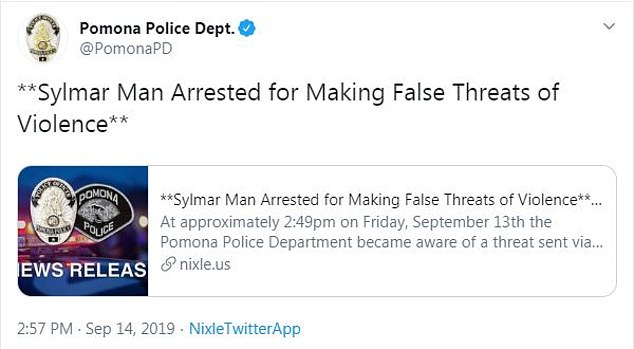 Olivieri said: ‘He felt that it was appropriate to send this threat to spark some chaos and commotion, it would be captured in the media, and he could then use that as an excuse to not go to the fair.’

‘Kind of a crazy thing.’

One day before the suspected attack, the LA County Fair shared a tweet confirming the hoax.

It read: ‘We learned 9/13 of a possible threat. Working w/ Pomona Police & FBI were able to confirm that the threat was false. It’s illegal to make threats & the individual was arrested.’

The month-long fair announced in August that it would be increasing it’s security with a $200,000 investment in light of recent mass shootings around the county.

This fabricated threat came around two weeks after a gunman killed seven people in Odessa, Texas and a little more than a month after the mass shootings in El Paso, Texas and Dayton, Ohio.