California student dress-coded for not wearing a bra

A high school student got dress-coded for not wearing a bra, after being told people might assume ‘bad things’ about her due to her outfit.

Remy Altuna, a student at Beaumont High School in California, posted photos of herself in the incriminated garments on Twitter last week while recounting the incident.

She can be seen in a pair of jeans and a black tank top, with her hair up in a ponytail—an outfit that apparently prompted a school official to want to ‘protect’ her against other people’s comments.

Sanctioned: Remy Altuna (pictured), a student at Beaumont High School in California, got dress-coded for not wearing a bra, after being told people might assume ‘bad things’ about her 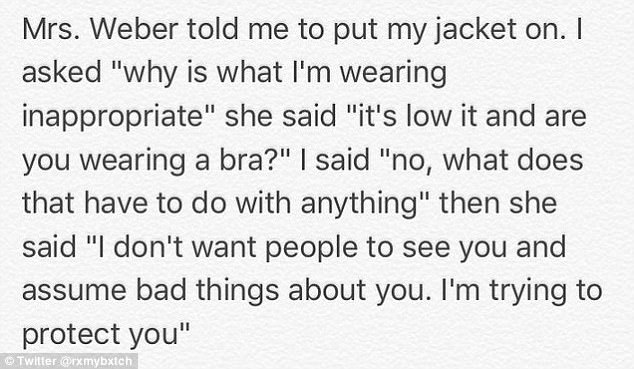 Flagging up: The teen recounted her assistant principal telling her: ‘I don’t want people to see you and assume bad things about you. I’m trying to protect you’

The teenager said an assistant principal told her to put a jacket on, prompting her to ask if what she was wearing was inappropriate.

In response, Remy recounted, the official pointed out that her tank top was low and asked her if she was wearing a bra.

When Remy informed the assistant principal that she had opted not to put one on that day, the authority figure replied, according to the teen’s account: ‘I don’t want people to see you and assume bad things about you. I’m trying to protect you.’

The teenager was infuriated by the exchange and called out her school on Twitter.

‘[Beaumont High School] is so out of line,’ she wrote. ‘Now they want to dress code you for not wearing a bra. My underwear is none of there [sic] business.’

She added in a follow-up tweet: ‘If Mrs. Weber is concerned about people talking about my appearance she should focus on dealing with the students behaving inappropriately.’ 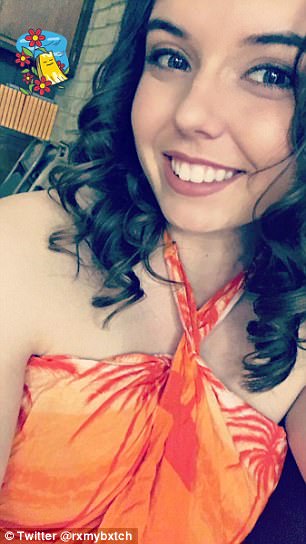 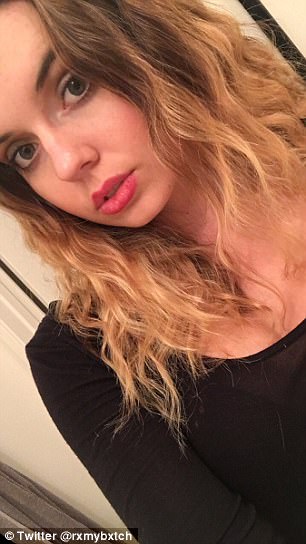 Choice: Remy opted not to wear a bra because, she said, if she had worn one, the straps would have been visible, which would have violated the dress code

School administrators acknowledged in a statement to NBC4 that making sure the dress code is respected is not a perfect process.

Beaumont’s dress code states that ‘tops must cover all parts of undergarments and shall not be low cut or revealing’.

It also indicates that ‘white undershirts [or] tank tops are not to be worn alone’, but does not have a similar rule for black garments.

Remy chose not to wear a bra because, as she told NBC4, if she had worn one, the straps would have been visible, which would have violated the dress code.

‘This year it just seems like they’re really out for blood, looking for anything,’ Remy told Yahoo Style about her school.

Female students, she said, have been most targeted by the enforcement, while boys seemed to be able to get away with some violations, such as wearing ripped jeans.