California woman, 49, collapses and dies while hiking the Grand Canyon in 114 degree heat

A San Francisco Bay Area woman who was hiking the Grand Canyon with her husband and a friend on Wednesday died after becoming dizzy and disoriented in the scorching 114-degree heat.

Catherine Houe, 49, of Daly City stopped breathing after she, her husband, and the friend hiked some four miles down into the Canyon, according to the National Park Service.

The agency said that the three were hiking down the South Kaibab Trail to spend the night at Phantom Ranch when Houe succumbed to the heat late on Wednesday afternoon.

First responders from the National Park Service flew by helicopter to the South Rim, where they administered CPR on Houe.

An investigation into the incident was being conducted by the National Park Service in coordination with the Coconino County Medical Examiner’s Office, officials said.

A San Francisco Bay area woman died while hiking with her husband and a friend on the South Kaibab Trail in the Grand Canyon on Wednesday, according to the National Park Service. The group was about a half-mile from the Tip Off resthouse (seen in the above stock image) 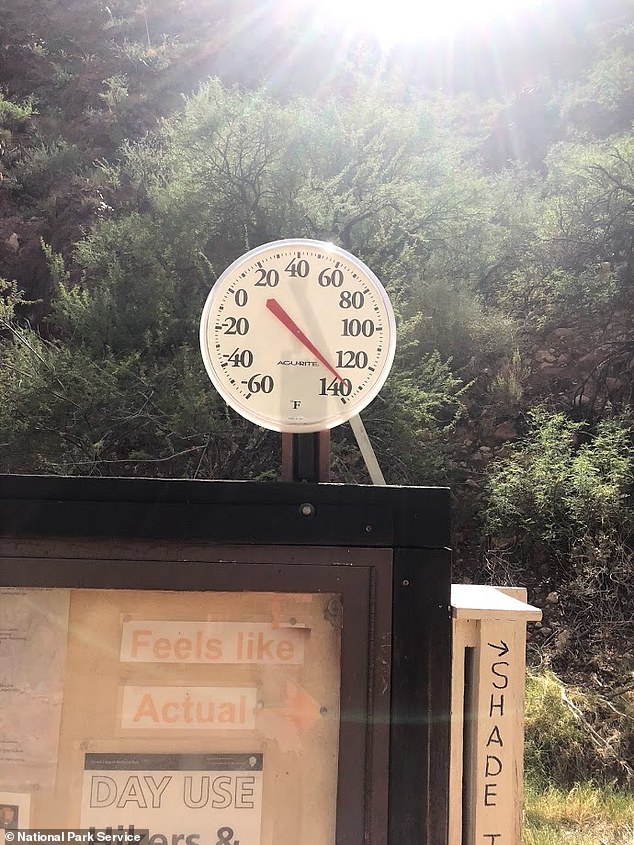 Temperatures reached 114 degrees on Wednesday, though the National Park Service warns hikers that it could feel even hotter if they are directly exposed to sunlight

Visitors to the Grand Canyon, especially hiking in the inner canyon, should be prepared for excessively hot days in the coming weeks, officials said.

The National Park Service has warned hikers to take precautions when hiking downhill into the Grand Canyon in the summer months.

Scores of hikers experience severe illness, injury, or death every year from hiking in the canyon, according to the NPS.

The NPS last week tweeted a photo showing a shoe that came apart as a result of the extreme heat, which even in shaded areas can reach up to 112 degrees.

Those who are exposed to direct sunlight and are not standing in the shade would need to withstand temperatures that could exceed 130 degrees.

The NPS advises would-be hikers visiting the canyon to avoid hiking between 10am and 4pm.

The agency also warns would-be hikers that the farther into the canyon one goes the hotter the temperature. 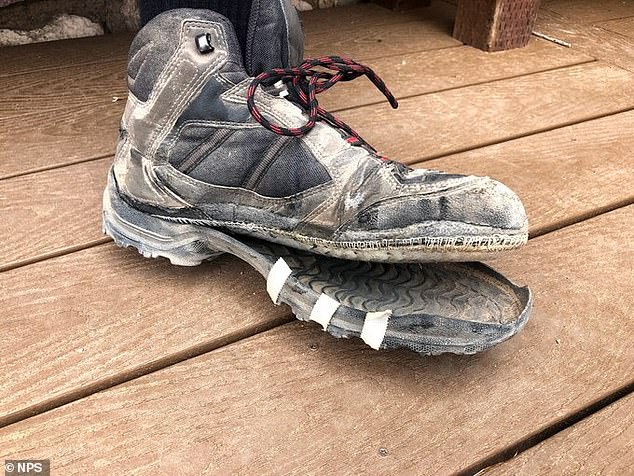 Grand Canyon hikers were warned their boots could literally melt apart and their feet will develop blisters because of extreme heat conditions at the national park. Pictured is an image posted online last week by the park service showing the affects of the heat on footwear 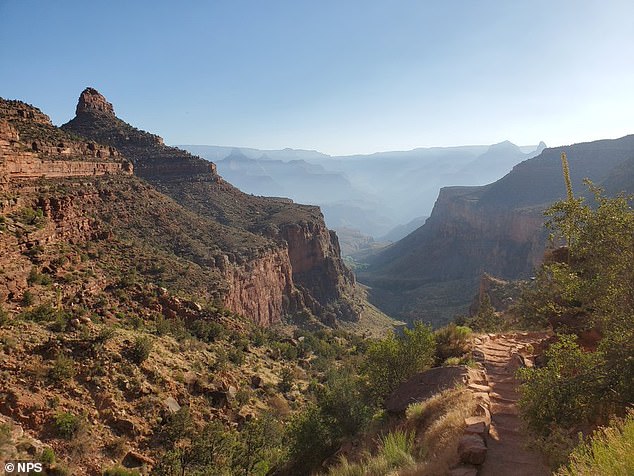 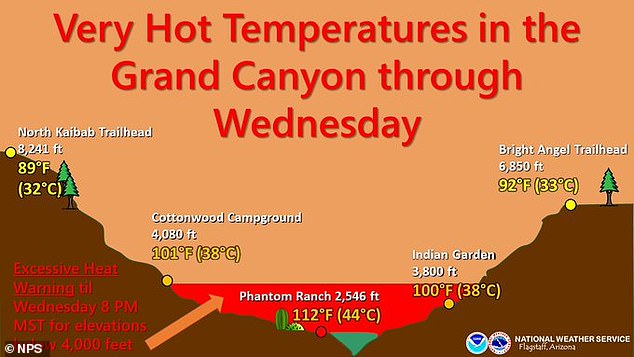 The extreme heat in the lower elevations was being caused by a compression of air as it descends into the canyon, according the National Weather Service. The chart above shows how ‘adiabatic heating’ can raise temperatures in lower elevations of the canyon

The NPS recommends that hikers who plan to visit the canyon drink lots of water and eat plenty of salty foods to keep sodium levels up.

‘Thinking of hiking in the Grand Canyon this week? Not a good idea,’ the park service tweeted last week, warning hikers away from the lower areas and alerting that ‘An Excessive Heat Warning’ was issued below 4000 feet through Wednesday.

‘Grand Canyon is an unforgiving environment,’ says the park service in another social media post.

Air as it descends into the canyon becomes more compressed, according the National Weather Service.

As it becomes more compressed, the air releases energy the further down it goes.

‘The heat inside the canyon can cause shoes to come apart, and heavy hiking boots can trap sweat and lead to painful blisters,’ park service officials explained.

‘Before setting off on a hike, understand the limitations of yourself and your gear.’

The extreme heat in the lower elevations was being caused by a compression of air as it descends into the canyon, according to the National Weather Service.

During what is known as ‘adiabatic heating’, air becomes more compressed as it descends into the canyon, and releases energy the further down it goes.

That’s in fact what the park service expects at the canyon’s Phantom Ranch this afternoon.

The canyon warnings come as much of the West has experienced a brutal heat wave this week at the same time wildfires are burning in the region.

Temperatures across western states have reached the triple digits as wildfires have raged across Arizona, marking an ominous start to the fire season in the region, which many fear will be severe due to hot, dry conditions.

So far this year, wildfires have burned more than 170,000 acres in Arizona, nearly four times the area destroyed by fire at the same point in 2019, according to officials. 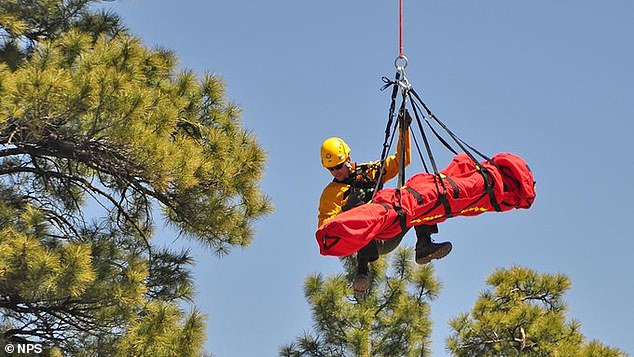 As the extreme heat condition warnings have been issued, park service workers have already had to respond to several heat-related search and rescue incidents. Two people (including one person pictured) had to be flown by helicopter to a local hospital for treatment.

As the extreme heat condition warnings have been issued at the Grand Canyon, park service workers have already had to respond to several heat-related search and rescue incidents.

The runner was in an ‘altered state of consciousness,’ after drinking an excessive quantity of water, leading to hyponatremia, a term used to describe a dangerous drop in the body’s sodium levels.

The runner had to be transported by helicopter and ambulance to the Flagstaff Medical Center in Flagstaff, Arizona, the park service says.

Last Sunday, Indian Garden rangers responded to a ranger in a similar ‘altered level of consciousness’ on the Bright Angel Trail.

When the rangers arrived, the hiker was in heat stroke and required immediate cooling measures, the park service said.

The hiker also was taken to Flagstaff Medical Center for treatment.

The park service also responded to hikers in need of assistance for heat exhaustion on the Bright Angel and South Kaibab trails.