Californian man, 35, loses more than 300lbs after finding he couldn’t walk to the beach

A man has revealed that he decided to shed more than 300lbs after discovering that he could not walk to the beach, take a shower, ride on roller-coasters or fit in a regular plane seat.

Dustin Hall, 35, from California, tipped the scales at 534lbs after eating in excess of 4,000 calories before 9am every morning because he would consume a large caramel Frappuccino, two banana breads, hash browns, breakfast sandwiches and a large breakfast burrito.

However, after people also began criticizing his weight, Dustin decided to cut his waistline by walking 10,000 steps a day before hitting the gym, calorie counting, and getting a gastric bypass.

Dustin Hall, 35, from Lathrop, lost more than 300lbs by walking 10,000 steps a day, starting to go to the gym, calorie counting, and by having a gastric bypass 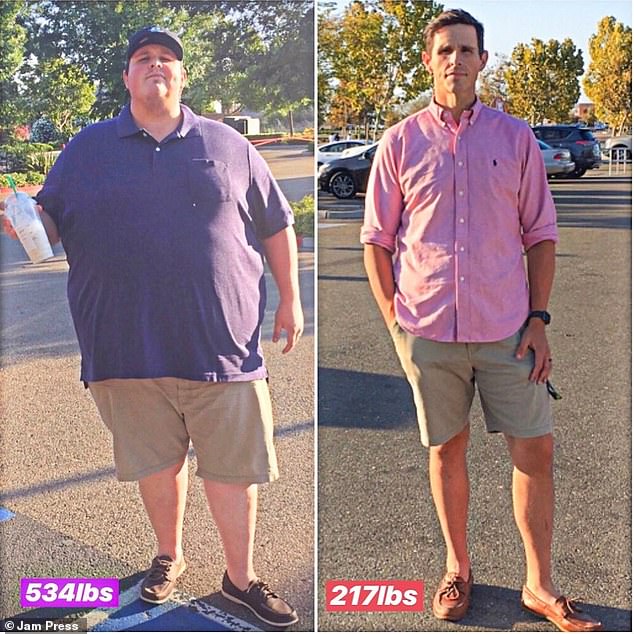 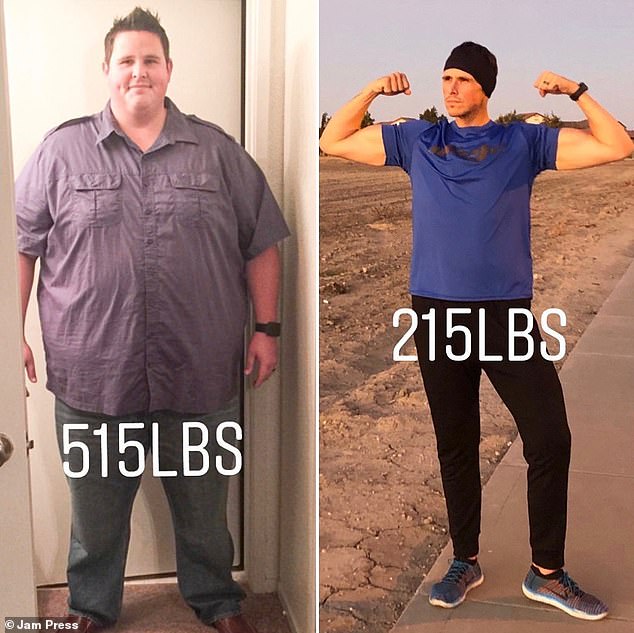 He got to this size by eating more than 4,000 calories before 9am. Listing his breakfast, Dustin said he would consume a large caramel Frappuccino, two banana breads, hash browns, breakfast sandwiches and a large breakfast burrito

The insurance appraisal coordinator, who was born weighing an above-average 12lbs, said he faced bullying from a very early age about his weight.

‘There were statements and words that were spoken from when I was a kid that have always stuck with me’, he said.

‘I remember this one kid saying is it true because Dustin is fat he’ll die sooner?

‘Another time I was on my way home from school, and somebody yelled out of a moving car, “LOSE WEIGHT FATTY.”‘

His parents dodged the issue because they were ‘uncomfortable conversations’, and while friends and co-workers referenced his size Dustin was not motivated to turn it around.

The final straw came one day at the beach. 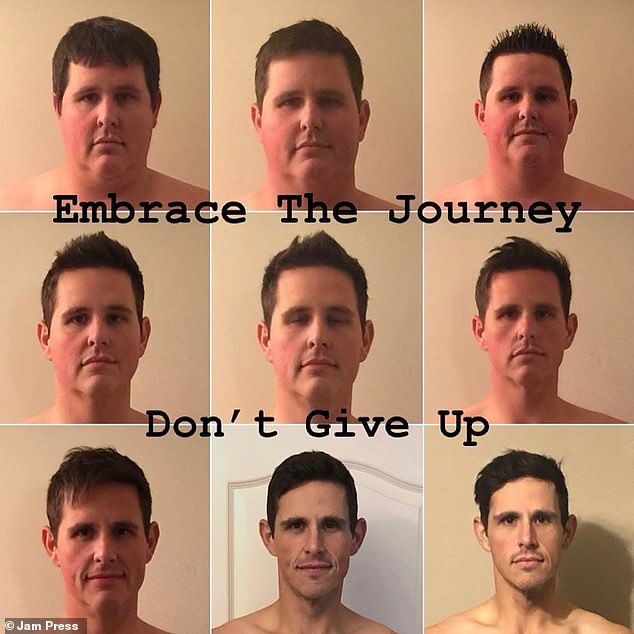 Dustin has chronicled his weight loss on social media, including showing how it has changed his face overtime 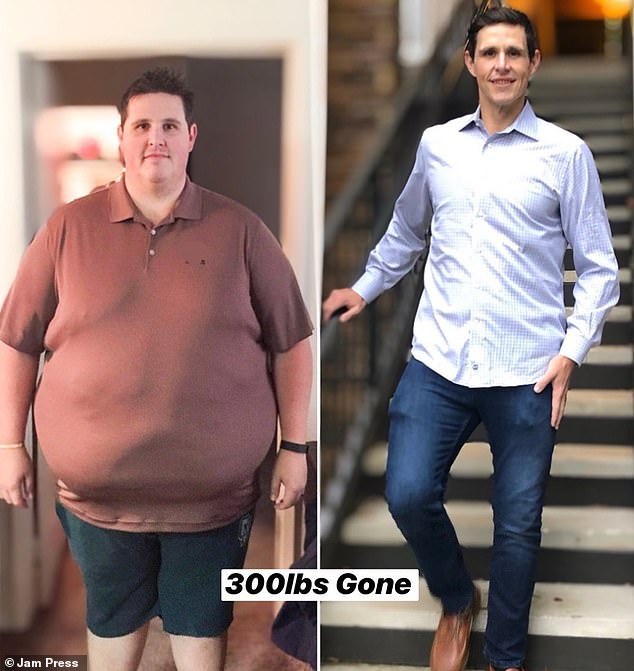 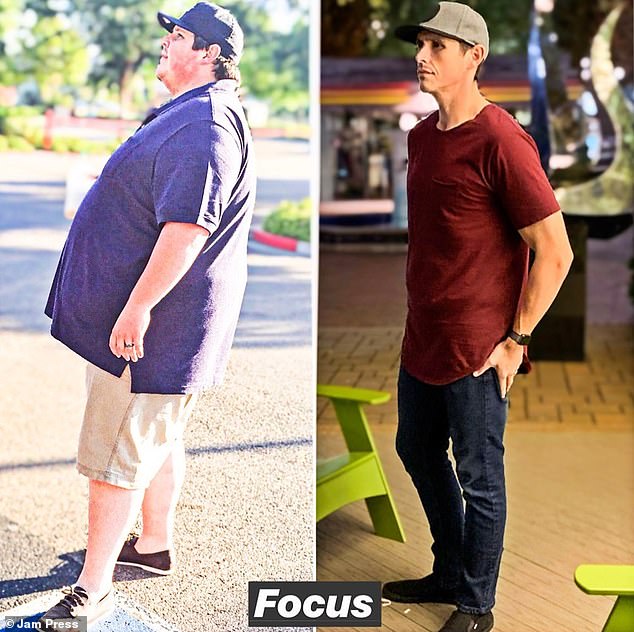 Dustin decided to lose weight after finding he could not walk to the beach, take a shower, sit in a regular plane seat, or ride on roller-coasters

‘We parked a few hundred feet away and walked towards the ocean. I remember halfway to the ocean I was so tired and out of breath that I had to sit down.

‘It was then I knew I needed to make a change. My weight had robbed me of seeing something I loved, the ocean.’

At his peak weight of 534lbs, Dustin was also helpless in other areas of his life.

‘I couldn’t shower correctly, or tie my shoes’, he said. ‘I couldn’t shop at regular stores, or fly on an airplane in a regular seat. I needed a seat-belt extension.

‘I wasn’t even able to ride on roller-coasters.’

After a few years of ‘yo-yo dieting’, where Dustin tried but failed to stop piling on the pounds, he opted for a gastric bypass.

‘I tried every diet, and failed’, he says. ‘So in July 2016, I went for elective gastric bypass surgery, at the recommendation of my doctor. 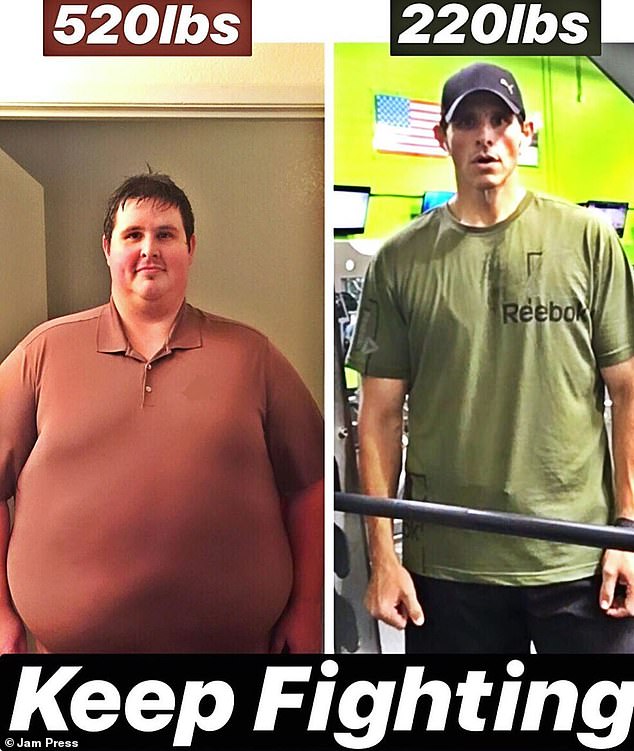 Dustin also said that he had faced insults from strangers with one person yelling at him out of a car window. He is pictured here before and after his weight loss 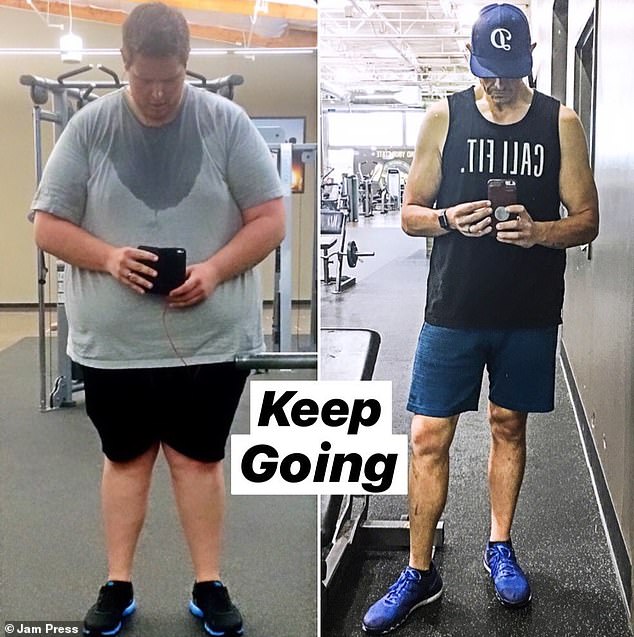 To lose weight Dustin started walking 10,000 steps a day. After getting comfortable with this he decided to hit the gym 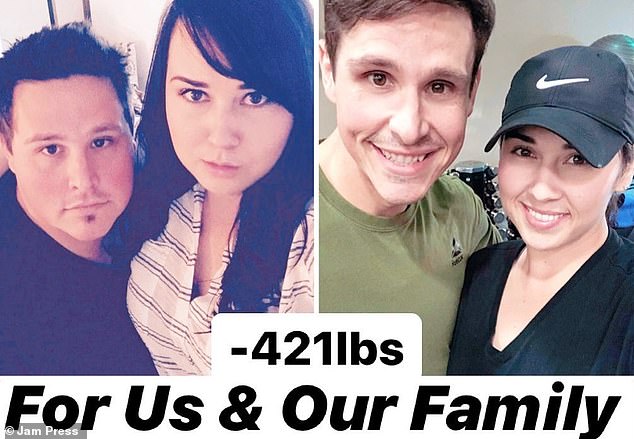 Dustin, pictured here with his wife Rocky, said she had supported him and being incredibly patient during his struggles. She has also lost weight

‘I was dealing with a lot of health issues, and this felt like my last chance.’

Before going under the knife, Dustin made a pledge.

‘Days before surgery, I committed to my wife that if I have this surgery I am going to take it seriously. I am not going to cheat and I am going to aggressively get my life back.

‘I started by grabbing a Fitbit and just walking. I walked 10,000 steps a day, no exception.

‘Once I felt acclimated to walking, I join a gym. I started on the cardio machines and committed to going 60 mins a day with getting my 10,000 steps in.

‘I progressively grew my strength and stamina up to make working out normal for me. Now, I go six days a week, including both cardio and strength training into my workouts.’ 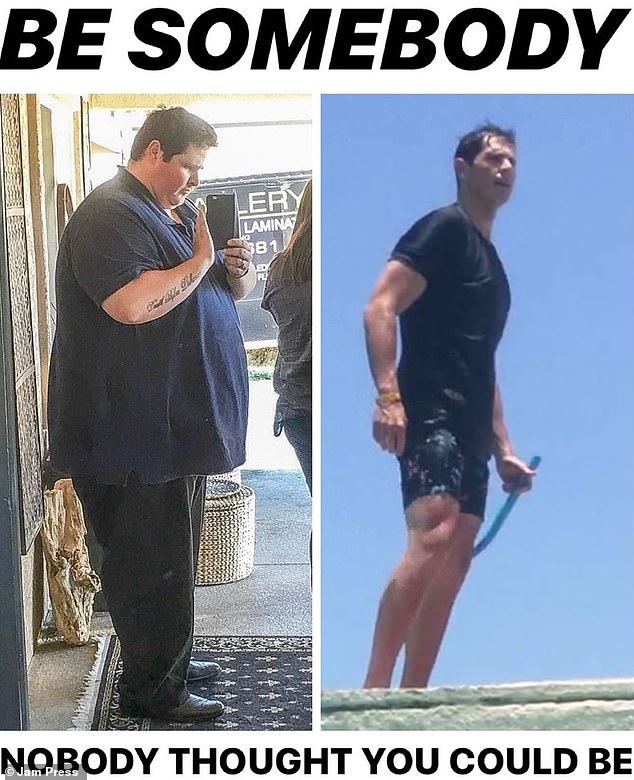 Dustin, pictured before and after weight loss, also managed to cut his waistline after getting gastric bypass surgery 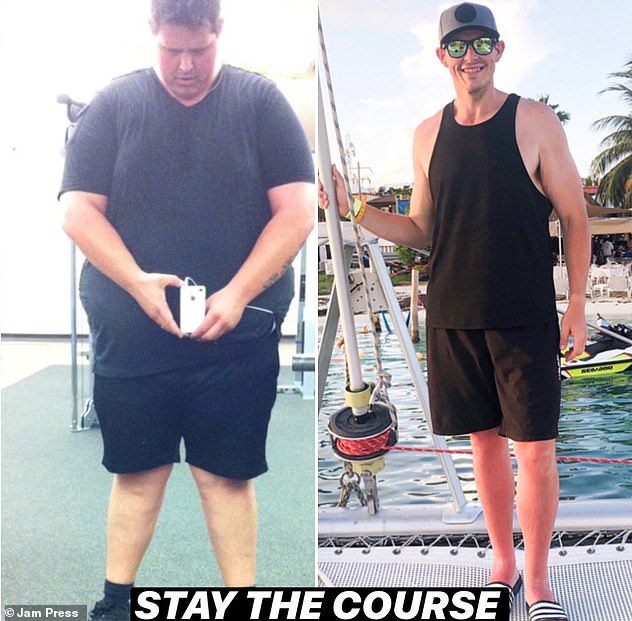 ‘I started by focusing on calorie tracking with a focus on high protein, low carb/sugar. My diet looked a lot like the ketogenic diet, but it wasn’t officially because I never actually measure.

‘But it’s the same basic principles of higher protein and lower carb. It works.’

‘Patience was a big thing I had to learn in this process,’ Dustin said. I felt good that I was losing weight, but during days when I didn’t see the changes or feel them, I would get discouraged.’

But with the words of his bullies echoing in his ears, Dustin doubled down and worked even harder.

The most rewarding part of Dustin’s journey happened, of all places, at Disneyland.

‘A huge positive side effect was being able to ride roller-coasters at Disneyland,’ he recalled. 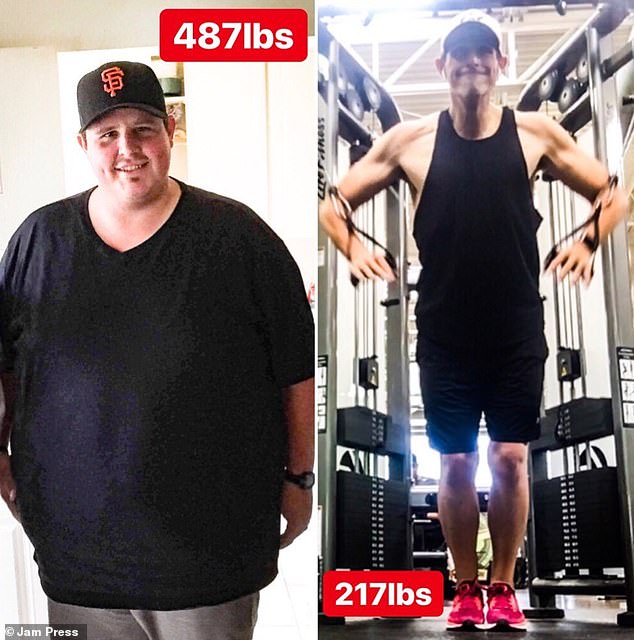 This post shows Dustin when he weighed 487lbs, having begun his weight loss journey, and when he had got his weight down to 217lbs 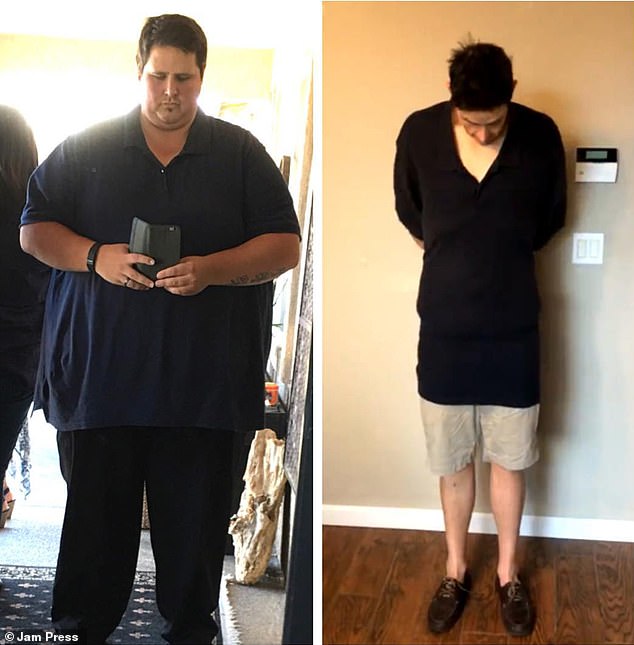 Dustin said that after losing the weight he was finally able to go to Disneyland and try out the roller-coasters. He is pictured here before and after his weight loss

‘That was a sore spot. I had spent so many years waiting in line, only to be denied because of my size.’

‘Being able to get in line and ride the ride was a huge accomplishment.’

Dustin is proud of how people have reacted to his new weight of 217lbs, and often has to re-introduce himself to people who don’t recognize him.

He admitted losing some friends, but added that he had also gained many more new ones.

‘At my heaviest weight I didn’t have nearly as much quality social interaction as I do now’, he said.

‘I’m not sure if people were intimidated because of my size or embarrassed of me, but I’ve definitely noticed people being more social with me as I lost weight.

‘I’m not sure if people were intimidated because of my size or embarrassed of me, but I’ve definitely noticed people being more social with me as I lost weight.’

And he’s delighted to have inspired others to take their health more seriously. 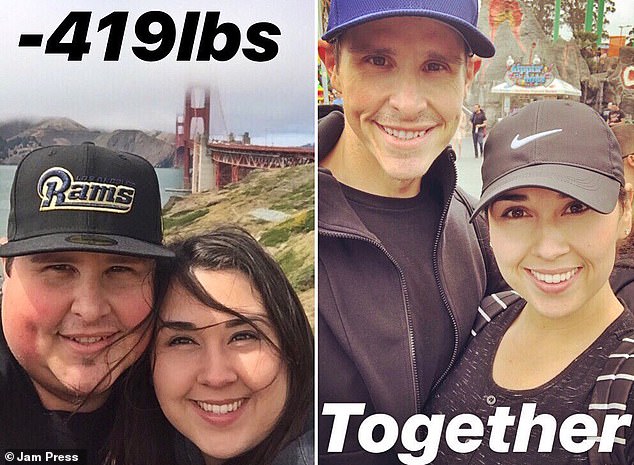 Dustin worked to shed the pounds with his wife Rocky. The pair live in California 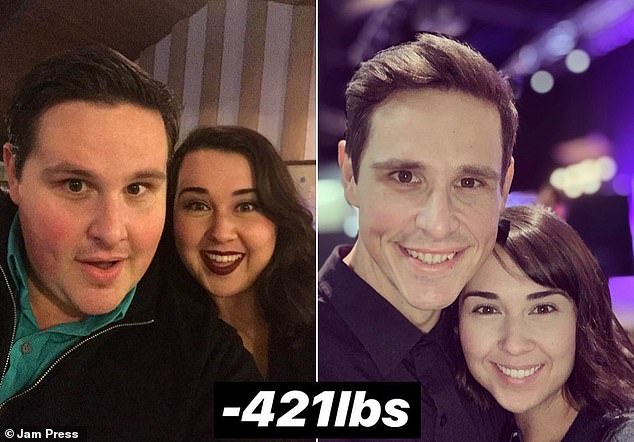 ‘A young girl messaged me recently. She said her father is at a similar starting weight to myself, and is having health issues because of the weight.

‘She said my pictures and story motivated her to get her family healthy and not let weight hold them down. Deep down that feels good.’

Throughout, he expresses gratitude for the support of his wife.

‘She has been incredibly patient during my struggles, and was very excited and encouraging along my journey, a pivotal part of my support system,’ he said.

And he has this simple advice to anybody who wants to follow in his inspirational footprints.

‘Start slow. Know there isn’t one plan for everyone. Everyone is different. Incorporate things into your life you’re prepared to do the rest of your life,’ he said.

‘It’s not a race, it’s a journey. Don’t let emotions, stress or circumstances influence your health. Control the narrative.’