A strange ‘swarm’ of small earthquakes in California that lasted nearly four years was triggered by fluid spilling into the fault system from underground reservoirs, scientists say.

The naturally occurring injection of underground fluid drove the earthquake swarm near Cahuilla in Southern California, which occurred in bursts around the region from early 2016 to late 2019.

US scientists have made their conclusions based on earthquake detection algorithms that catalogued more than 22,000 individual seismic events that made up the ‘swarm’.

Using machine learning to plot the location, depth and size of the tremors, the researchers generated a 3D representation of the underlying fault zone.

The results suggested dynamic pressure changes from natural fluid injections deep below the surface largely controlled the prolonged evolution of the Cahuilla swarm.

An animation summarising the team’s observations. A fault zone is embedded in host rock and exhibits geometric warping along strike and along dip. Within the fault zone, there are undulating channels. A small portion of the base of the fault zone connects to a deeper reservoir that is initially sealed. Once the seal breaks, fluid is injected into the fault zone, which diffuses primarily through channels, driving the seismic activity 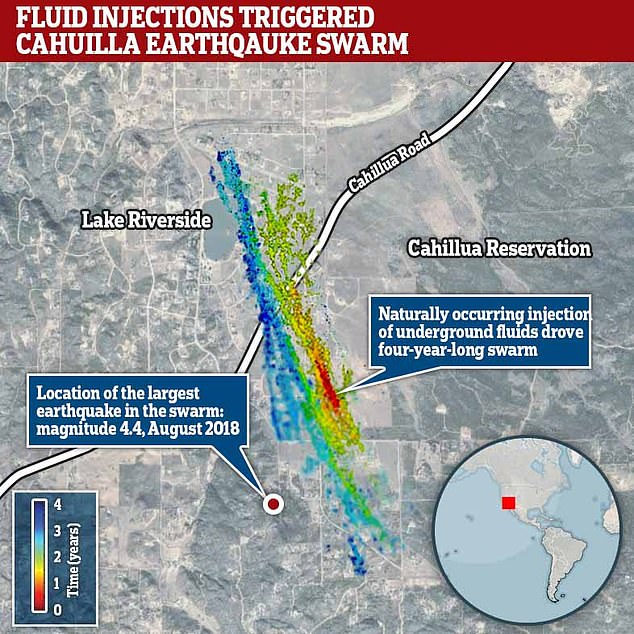 Graphic shows the dispersion of seismic activity that made up the four-year period of ‘swarms’. The earliest swarms in a small fault zone (in red) was triggered by underground fluids. This original spate set off more swarms throughout the four years

The scientists’ new method sheds new light into how fault architecture governs earthquake patterns – and could help characterise other seismic events around the world.

Earthquake swarms are common in Yellowstone and, on average, comprise about 50 per cent of the total activity in the Yellowstone region.

Swarms occur when many earthquakes take place over several weeks or months, with no clear sequence.

Traditional earthquakes feature a main event, followed by a series of aftershocks.

Seismic activity could be a sign of an impending eruption of the supervolcano, although this is impossible to predict exactly.

Southern California lies on a tectonic block broken off from the North American tectonic plate by the passing Pacific plate, which can lead to chaotic seismic activity.

In contrast to mainshock-aftershock earthquakes, where a large quake is followed by many smaller aftershocks, swarms typically do not have a single ‘stand-out’ event.

The swarm of tremors in Cahuilla occurred between 2016 and 2019 near Mt. San Jacinto in Southern California.

The unusual four-year spell of quakes, none of which registered at more than 4.5 in magnitude on the Richter scale, were mostly too small for humans to notice.

‘We used to think of faults more in terms of two dimensions – like giant cracks extending into the earth,’ said study author Zachary Ross, assistant professor of geophysics at the University of Southern California.

‘What we’re learning is that you really need to understand the fault in three dimensions to get a clear picture of why earthquake swarms occur.’

Despite being known as highly complex three-dimensional structures, earthquake faults are often simplified into two-dimensional features in most standard models of general fault architecture.

However, these representations fail to explain the dynamic seismicity of earthquake swarms – prolonged periods of localised seismic activity that can occasionally persist over several years. 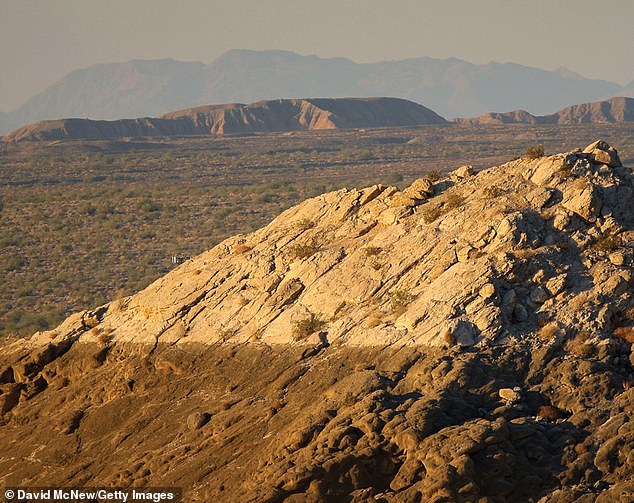 The site of an ancient lake in a fault-rich region near Salton City, California, not far from the site of a seismic ‘swarms’

While many of a swarm’s tremors are small, the overall length of the phenomenon and the potential severity of individual seismic events cannot be predicted, which makes them a public safety concern

Swarms had previously been associated with regions of elevated heat flow, rather than earthquake triggering via stress transfer.

To better understand what was causing the shaking, researchers used earthquake-detection algorithms with neural networks to produce a detailed catalogue of more than 22,000 seismic events in the area.

These ranged in magnitude from 0.7 to 4.4 – the latter of which occurred in August 2018, south of Lake Riverside, just off Cahuilla road.

Plotting these curves was crucial to understand the reason for the years of irregular seismic activity, the researchers said in a statement.

Typically, faults are thought to either act as conduits for or barriers to the flow of underground fluids, depending on their orientation to the direction of the flow.

But the architecture of the fault actually created complex conditions for underground fluids flowing within it. 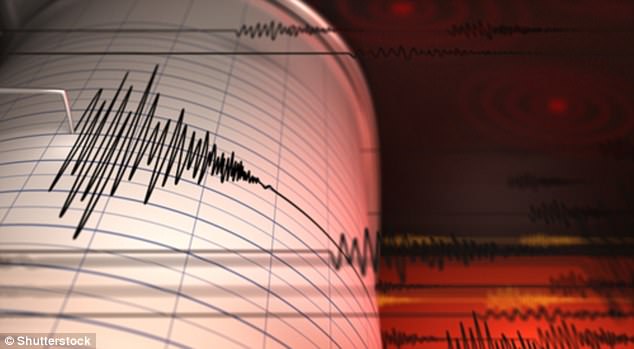 The largest of the tremors measured 4.4 on the Richter scale, which causes ‘noticeable shaking of indoor objects and rattling noises’ and generally ’causes zero to minimal damage’

The fault zone contained ‘undulating subterranean channels’ that connected with an underground reservoir of fluid, which was initially sealed off from the fault.

When that seal broke, fluids were injected into the fault zone and diffused through the channels, triggering earthquakes, they concluded.

This natural injection process was sustained over the course of nearly four years, right up to the end of last year.

‘These observations bring us closer to providing concrete explanations for how and why earthquake swarms start, grow and terminate,’ said Ross.

The team plans to build off these new insights and characterise the role of this type of process throughout the whole of Southern California.

The study has been published in Science.