Calls to dementia helpline have DOUBLED since 2009 and surge 40% at Christmas because people ‘face reality’ at family gatherings, charity reveals

Crisis calls from people affected by dementia surge by 40 per cent over Christmas, a charity has warned.

The Alzheimer’s Society said families often seek help over the festive season after noticing behaviour changes in their relatives that may indicate dementia.

People with dementia are also more likely to become distressed over Christmas and reach ‘crisis-point’ because changes to their familiar routines can be overwhelming.

The charity said the surge in demand for its helpline – which offers expert advice to people affected by dementia – reveals how a lack of support means people have nowhere else to turn.

The Daily Mail launched a major campaign in July calling on the Prime Minister to fix the dementia care crisis that denies people and families support from the state.

We are campaigning for reform of the broken system which forces thousands of people to sell their homes to fund crippling care costs.

The Alzheimer’s Society said the number of calls to their helpline have doubled in a decade because people with dementia ‘feel abandoned with nowhere to turn’.

One third of a million people have now used the service in total, with 45,000 calls for help being answered last year alone.

Last Christmas the charity dealt with a spike of 42 per cent between December and January, taking more than 4,040 calls over the month.

During the festive season, the highest number of enquiries on were concerns about celebrating Christmas – feelings of guilt, worries about life expectancy and what to say to people with dementia about ‘going home’ for Christmas. 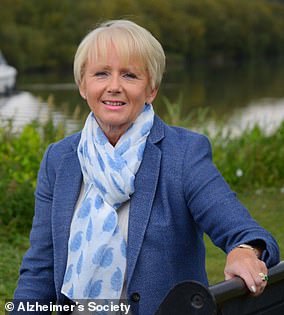 Sandy Sweet, 60, used the Alzheimer’s Society’s helpline after her mother was diagnosed with dementia.

She said: ‘I first phoned Alzheimer’s Society’s Dementia Helpline when Mum was diagnosed, soon after Christmas.

‘My parents and brother came to visit, and we always used to have a big Christmas Eve party. I noticed something was wrong because my Mum didn’t recognise my friends, even though she knew them well.

‘When I was told about Mum’s diagnosis, I didn’t know what to do, or where to go.

‘I found the Dementia Helpline number, where I was able to talk through all my questions and get invaluable advice about current drug treatments.

‘I must have phoned four or five times over the years – I call and just say I need help. They are always so helpful.’

‘Far too many people affected by dementia are reaching crisis-point, feeling abandoned with nowhere to turn.

‘It’s no wonder that we’re seeing upsurges in calls for help to our Dementia Helpline and visits to our online community and website for instant support, which is simply not available elsewhere.

‘To help us cope with this increase in demand, please give whatever you can to Alzheimer’s Society this Christmas, so that we can continue to provide vital support to the 850,000 people living with dementia in the UK and the millions more families and friends who are affected during the festive season and all year-round.’

There are currently 850,000 people living with dementia, and a predicted one million will have the condition by 2025. But thousands are facing a future without adequate support.

HOW TO DETECT ALZHEIMER’S

It is the cause of 60 percent to 70 percent of cases of dementia.

The majority of people with Alzheimer’s are age 65 and older.

There is no known cure for Alzheimer’s, but experts suggest physical exercise, social interaction and adding brain boosting omega-3 fats to your diet to prevent or slowdown the onset of symptoms.