A whistleblower was yesterday branded a ‘charlatan’ and accused of speaking out to pursue a vendetta against Brexit campaigners.

In a series of extraordinary claims, he alleged that his predecessor may have been murdered because of his work at CA.

But Mr Wylie, who appeared before a Commons committee with pink hair and wearing a nose ring, later came under fire when asked whether he was trying to damage the credibility of Vote Leave because the lobby group had previously turned him down when he asked for a job.

As Mr Wylie was questioned by MPs during a hearing lasting almost four hours, Mr Cummings labelled him a ‘fantasist charlatan’ in a blog post, and said newspapers which uncritically published his alleged disclosures will ‘look really silly’.

Earlier this month, Mr Wylie lifted the lid on how CA had harvested the personal details of millions of Facebook users, partly in a bid to sway the American election. 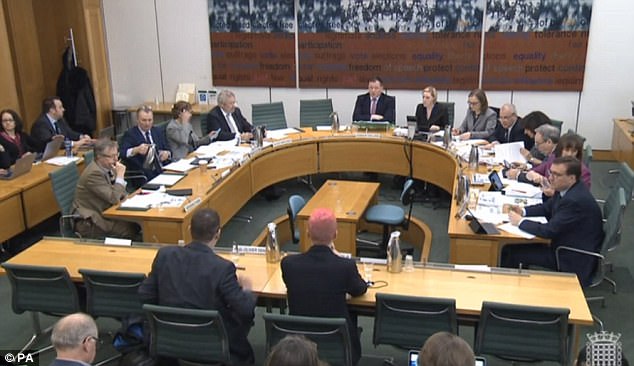 Yesterday the digital, culture, media and sport committee heard him repeatedly allege that Vote Leave only secured a vote for Brexit in 2016 thanks to AIQ.

‘I think it is completely reasonable to say there could have been a different outcome of the referendum had there not been, in my view, cheating,’ he said.

Of his time at CA, Mr Wylie claimed some workers had faced death threats when relationships turned ‘sour’.

He said: ‘My predecessor was found dead. One of my other co-workers had a massive head injury and is missing part of his skull. People do get hurt at this firm.’

But Tory MP Julian Knight questioned Mr Wylie on whether he had lifted the lid on Vote Leave because the group had turned him down.

Mr Knight also likened Mr Wylie to a ‘failed Alexander Nix’ – the Eton-educated boss of CA who was filmed boasting about techniques such as using honey trap Ukrainian escorts to try to influence politicians. Facebook billionaire Mark Zuckerberg has refused to be grilled by MPs about how his firm failed to protect the personal information of millions of its users.

However, last night the company said he was prepared to answer questions from US legislators in Congress.

Last week MPs demanded that the Facebook founder appear before them to answer questions about how the personal information of millions had been farmed out to scandal-hit British data firm Cambridge Analytica.

But yesterday, in a letter written by one of his staff, Mr Zuckerberg snubbed the invitation, despite claiming he supports the ‘belief that those issues must be addressed at the most senior levels of the company’.

Instead, he has asked one of his deputies to appear before the Commons digital, culture, media and sport committee.

‘You tried to set up in business as a type of CA, hawking your wares to Vote Leave and they said No, and now you are here in front of the committee, making suggestions about Brexit,’ Mr Knight said.

Mr Wylie hit back, saying he would not have launched a ‘vendetta’ to get back at the group’s campaign director.

After the hearing, Mr Knight said that although Mr Wylie’s evidence had been ‘compelling’, huge questions remained unanswered.

He said: ‘This whistleblower is making serious – and as yet unsubstantiated – charges against the Leave side which are being seized upon by those who want to set aside the result. I think people voted leave because they wanted to get out of the EU, not because they were hoodwinked.’