The couple who reported Boris Johnson to the police and recorded his row with girlfriend Carrie Symonds wrote an anti-Brexit play partly funded by the EU.

Eve Leigh, 34, and husband Tom Penn, 30, were listening through the walls as Mr Johnson and Ms Symonds argued as the couple live in the flat above.

Mr Penn and wife Ms Leigh called the police after they claimed they were ‘frightened and concerned’ by noises coming from the flat in the early hours of Friday morning.

In a statement last night Mr Leigh said his motivation for informing the police was not political and that ‘the extent of my involvement in politics’ was merely voting remain in the 2016 referendum.

But in a now deleted Twitter account, Ms Leigh wrote that she, ‘just gave Boris Johnson the finger, this weekend is unstoppable’ and this summer, she wrote how ‘all Tories suck’.

A source close to Ms Symonds said the gesture came after Mr Johnson spoke to her while taking down anti-Boris posters, which Ms Leigh said she played no part in.

She also previously claimed Theresa May had brought in ‘insanely cruel policies’, that Brexit was ‘racist’ and the Home Office was ‘lower than vermin’ as well as criticising Mrs May’s policies as ‘insanely cruel towards immigrants, poor people and people of colour’.

Ms Leigh also wrote: ‘If you feel sorry for her [May], have a look at yourself.’

Her anti-Tory tweets on her account, which had been active for seven years, dated back to the Occupy London protests in 2012 when Mr Johnson was the capital’s mayor.

That year she also co-wrote a production about the Occupy London protests that camped out at St Paul’s Cathedral.

Last week wrote on Twitter that Tories were ‘pretending to respect the memories of the Holocaust dead’.

Ms Leigh is an ‘experimental playwright’, a former palm reader and her partner is a also performs close-up magic, according to an interview in The Stage.

Earlier this year, one of her plays appeared in the Brexit Stage Left festival in London, a celebration of European theatre sponsored by a network of dramatists that is part-funded by the European Union.

Eurodram’s website reveals it is ‘co-funded by the Creative European Programme of the European Union’, which is a a £1 billion EU cultural project.

On an interview with The Stage magazine, Ms Leigh, who went to Cambridge University on a scholarship, also complained of funding cuts to the arts

She told the publication: ‘It [cuts] does lead to conservatism. It’s much easier to programme someone with a track record. A lot of people are very frustrated. There aren’t many opportunities and you have to stick around.’

Recently she created an ‘interactive installation’ called Climate Games at the Laboratory of the Insurrectionary Imagination festival in Paris.

Mr Penn, who was born in Cambridgeshire, is a trained percussionist and singer who has performed throughout Europe. 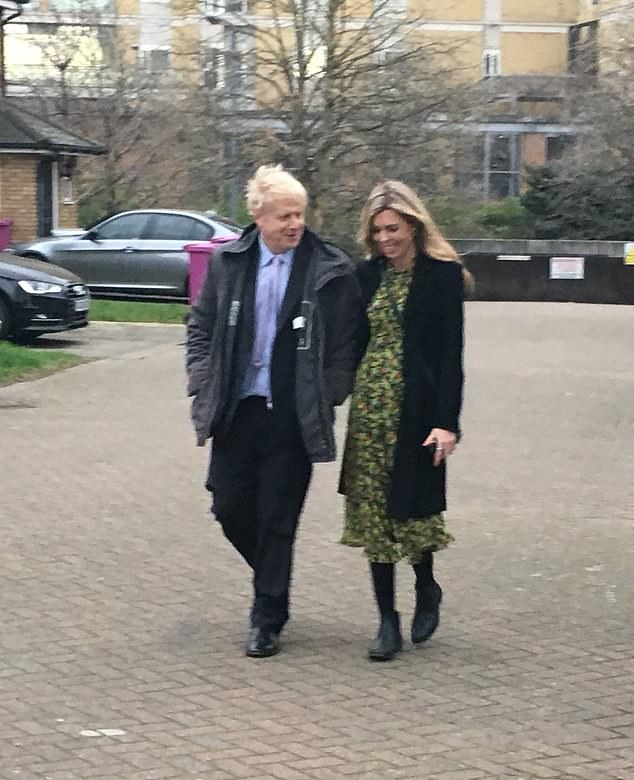 Boris Johnson and Carrie Symonds, who accused Mr Johnson of spilling red wine on her sofa and ordered him to ‘get off me’ and ‘get out of my flat’

He is a member of the Little Bulb Theatre in Surrey and tours in the southeast of England. He is also a playwright and, according to an online biography, has written six plays.

Raised in New York by a musician father and visual artist mother, Abby, Ms Leigh directed her first play at 16 and lived in a £15 million home.

Her father was American Broadway composer Mitch Leigh who wrote the 1965 Broadway musical Man Of La Mancha, which included the huge hit The Impossible Dream. He died in 2014 at the age of 86.

She moved to the UK at 18 and has previously said her family originated from Ukraine.

Ms Leigh, who married her partner Tom in March this year, has previously written plays that featured the refugees crisis, ‘subversive storytelling’ among Soviet dissidents and child abuse as subject matter.

She has written plays about Buddhist practices and coming from a Jewish background.

Her religious outlook influenced the theme of her most recent play, The Trick, which tackles the topics of ageing and coping with grief.

Ms Leigh bought her luxurious flat, which was formerly occupied by council tenants, above Carrie Symonds’ apartment for £720,000 in April last year.

According to The Guardian, Mr Johnson was heard refusing to leave the flat, with Ms Symonds then telling Johnson he had ruined the sofa by spilling red wine.

In the recording Mr Johnson can be heard shouting ‘get off my f***ing laptop’ before a loud crashing noise is heard.

Ms Symonds was also said to be heard telling Mr Johnson him to ‘get off me’ and ‘get out of my flat’.

She then tells him: ‘You just don’t care for anything because you are spoilt. You have no care for money or anything.’

At a hustings event in Birmingham today, Mr Johnson, 55, flatly refused to answer questions about the explosive row with 31-year-old Miss Symonds – who did not attend the event.

Police left the scene on Friday and no action was taken by officers.