Breath-taking footage shows the thrill of the hunt through the eyes of a deadly cheetah.

Wildlife cameraman Gordon Buchanan attached a camera to the back of one of the impressive hunters, and uncovered their hidden lives.

In footage filmed in Namibia, he follows three orphaned cheetahs as they head out on the hunt.

The video begins with the cheetahs searching around for a scent.

Gordon and a conservationist watch from afar and remark on how the animals are able to pick up the smallest hint of a scent with ease.

It becomes clear they have found a trail. The lithe creatures use the thick bush as cover. The closer they can get to the prey, the more likely it is they will make a kill.

One of the cheetahs, dubbed Odyssey by the show’s presenters, begins to pick up pace and emerge from the shrub – its eyes on its next meal. 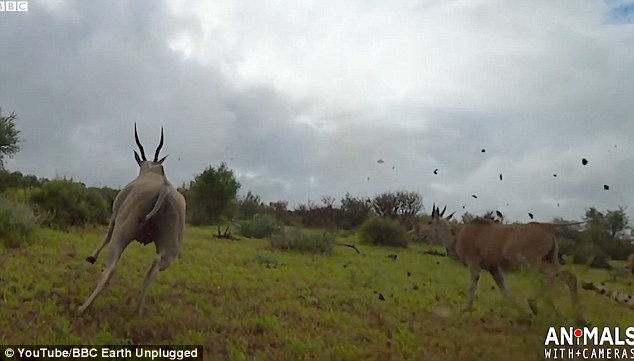 Its spots the target and freezes. Now the three cheetahs have moved into an arrow formation.

And suddenly, they’re off; pacing across the arid landscape after an unseen prey.

Then, their target comes into view. It’s a common eland calf and its mother.

One of the cheetahs manages to get its claws into the rump of the hefty creature, which kicks up rock and sand as it tries to outrun the team.

The cheetahs swerve to avoid a bush. And despite being hot on their preys tails, the cheetahs are forced to give up.

The stunning animals can only run at their top speed of 70mph for a few moments, and must hunt in short bursts.

This time, they were too slow.