Camila Cabello has confirmed her rumored new romance with Lox Club owner Austin Kevitch, her first relationship since her split from popstar Shawn Mendes in November 2021.

The 25-year-old singer was spotted coupling up with the dating app CEO, 31, on Sunday afternoon in Los Angeles.

The two were seen hand-in-hand, with Camila giving her beau a sweet kiss on the cheek as they spent some quality time together during a romantic coffee date.

New romance! Camila Cabello, 25, confirms she is dating dating app founder, Austin Kevitch, as they were seen holding hands and sharing a kiss during a date

The Havana hitmaker wore an eye-catching sundress for her outing with her new boyfriend.

She donned a long, blue floral dress with short sleeves to stay cool during the hot, summer day.

Camila opted for comfort and slipped into a pair of open-toed sandals as they went for a quiet stroll together holding hands.

To accessorize her look, she added a pair of stylish, gold-hooped earrings and slung a brown crossbody purse on her shoulder. 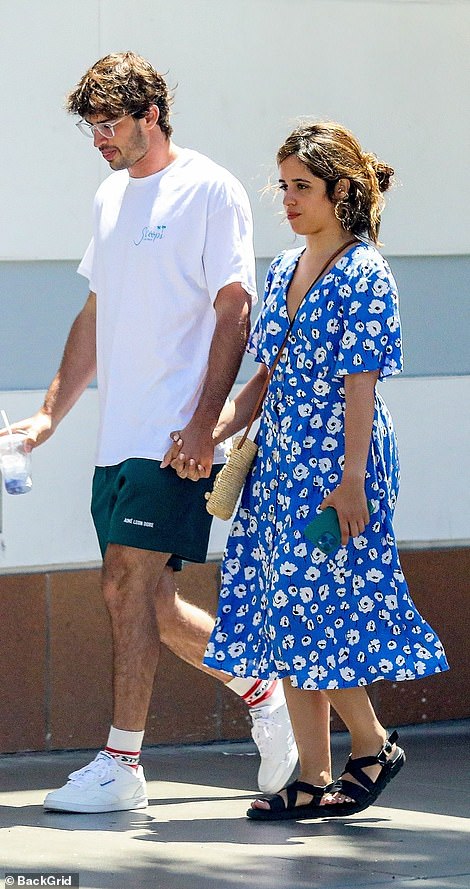 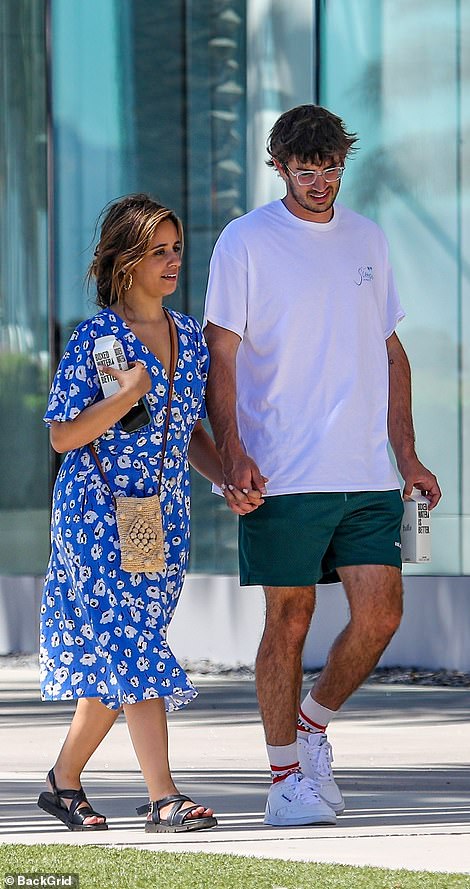 Romantic stroll: The two were spotted enjoying a conversation amid an afternoon walk in the city 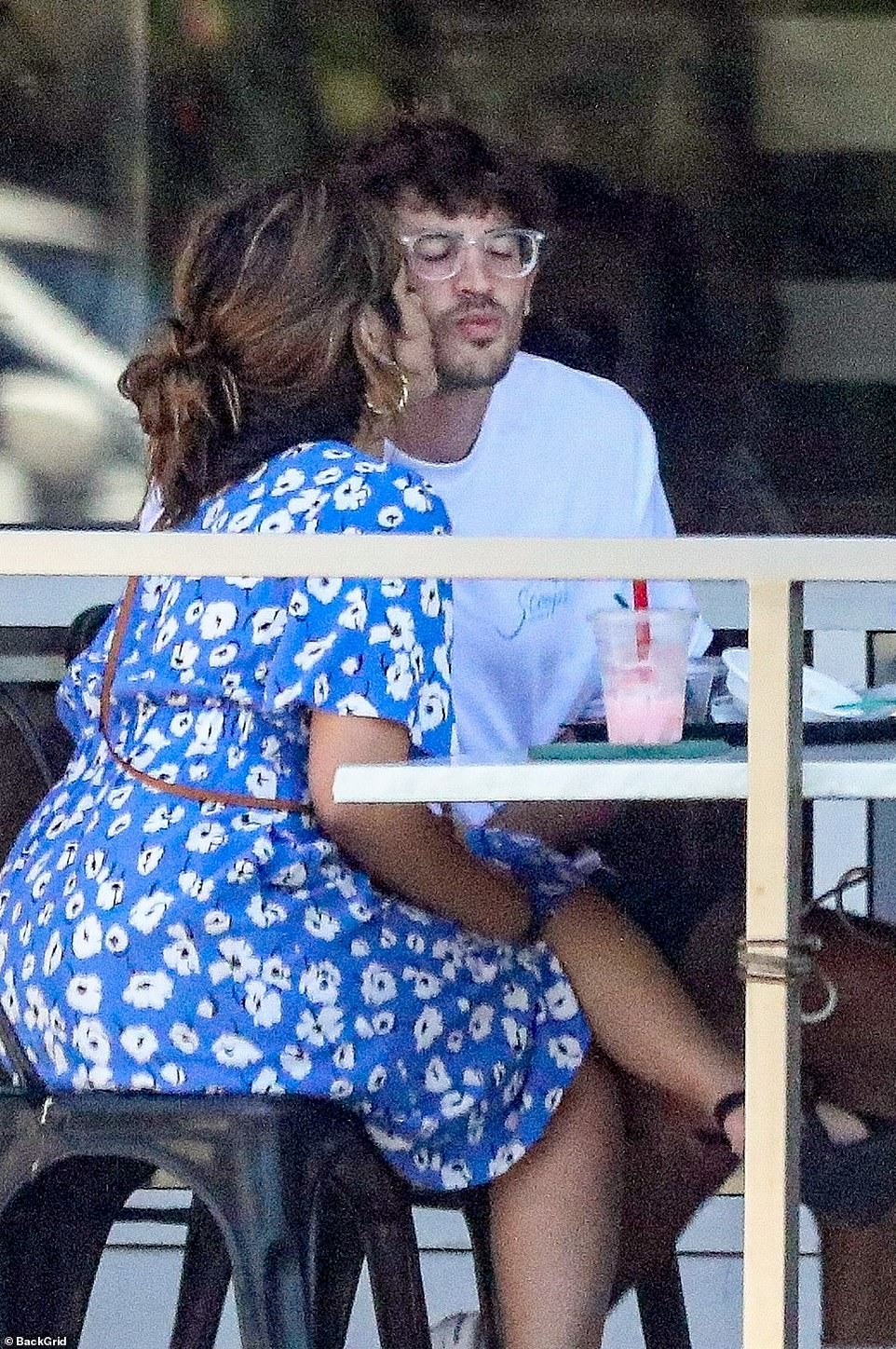 A kiss! Camila was pictured laying a quick peck on Austin’s cheek as they enjoyed a coffee date

Austin, who co-founded dating app Lox Club, dubbed the ‘Jewish Raya’ – that bills itself as ‘a members-only dating club for Jews (and non-Jews) with ridiculously high standards.’

According to the app, members have to go through an incredibly rigorous vetting process before they are granted access to the app, with the website stating: ‘Our membership committee vets every applicant to decide if they’re the right fit for our community. If accepted, every new member pays a membership fee to ensure they’re joining for the right reasons.’

The businessman also kept his look simple and casual for the date, donning a white T-shirt and dark green shorts.

He wore a pair of white sneakers paired with red-striped socks to complete his look.

The new couple were seen expressing smiles on their faces and appeared to be enjoying talking to each other during their first public outing as an official couple. 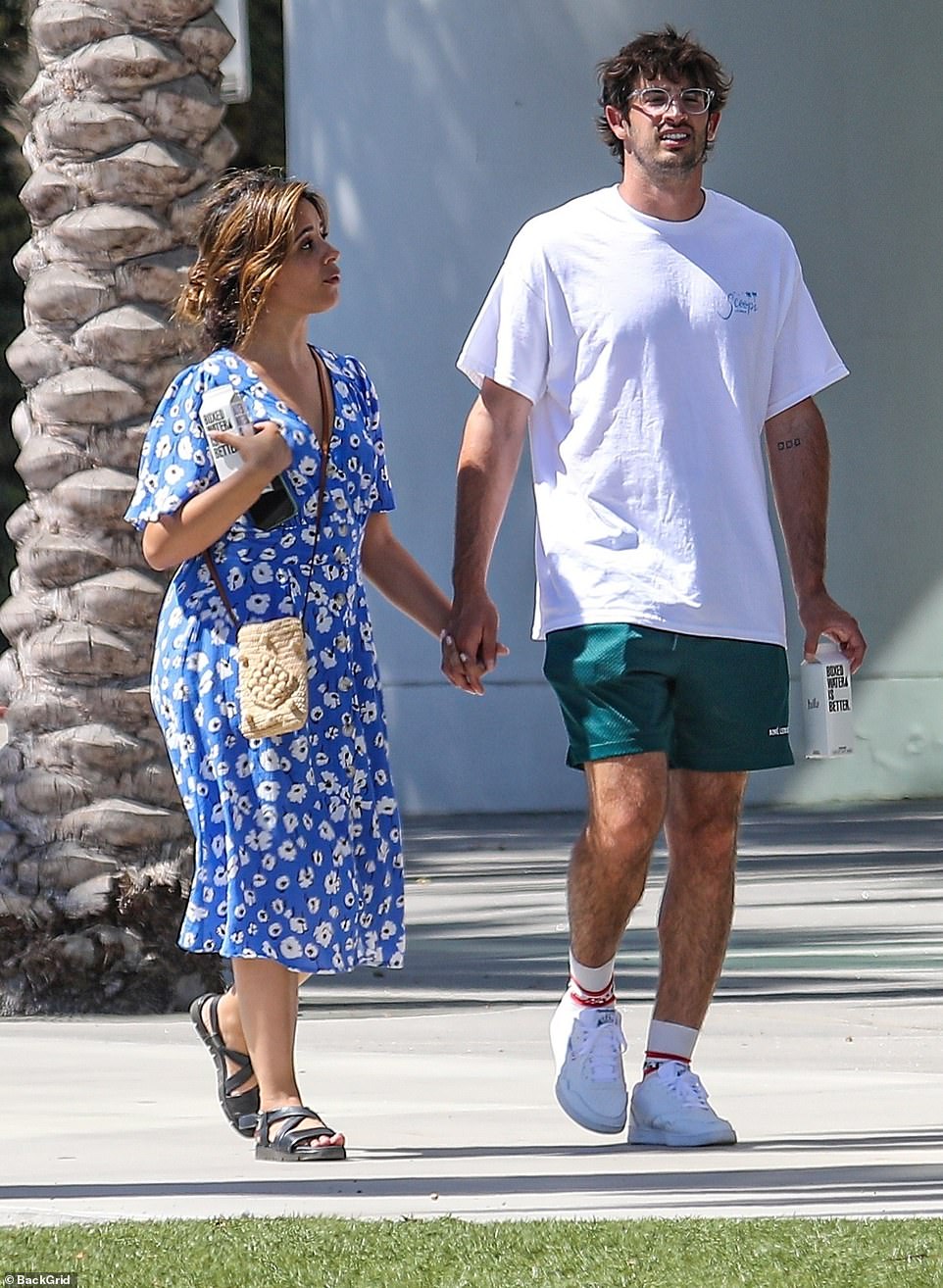 Moving on: After her split with Shawn Mendes in November 2021, the singer has found a new love in her life

Affectionate: Austin rested his hand on top of his girlfriend’s knee as they sat close together

During the date, the two stopped by to get a small bite to eat and a few drinks. At one point, Austin affectionately rested his hand on Camila’s knee as they sat close together at a shaded café.

The successful performer also showed equal affection by caressing his face with her hand as the two talked.

Rumors and speculations began spreading earlier this summer in June that the singer and CEO were a possible item when they were spotted together in Los Angeles on a stroll.

However, the rumors have been confirmed with their displays of love and affection for each other on Sunday.

Confirmation of Camila’s new love comes to the forefront as her ex, Shawn, spends time in Miami after cancelling the rest of his tour dates to focus on his mental health. 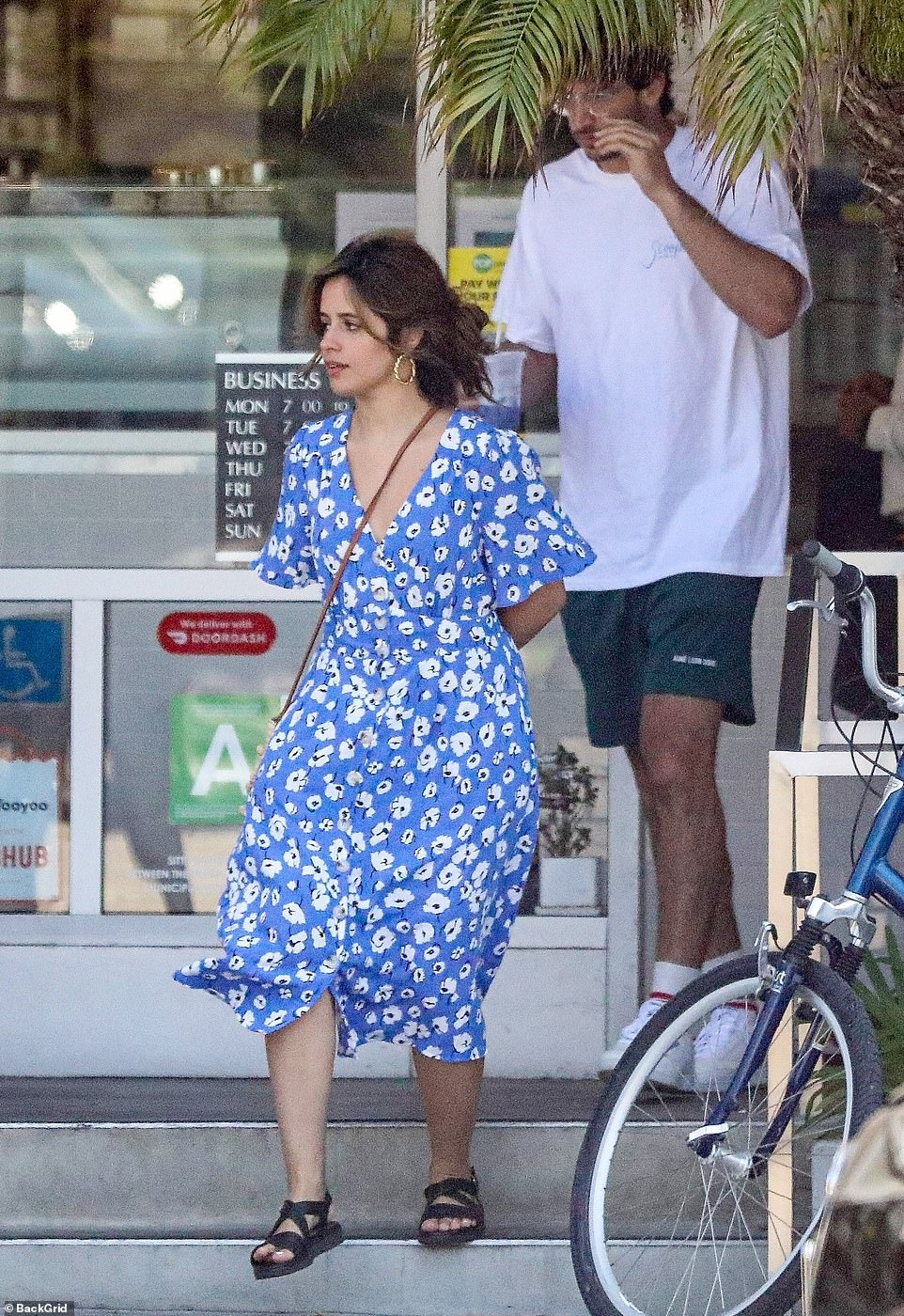 Time together: Confirmation of Camila’s new love comes after her ex, Shawn, cancelled the rest of his tour dates to focus on his mental health 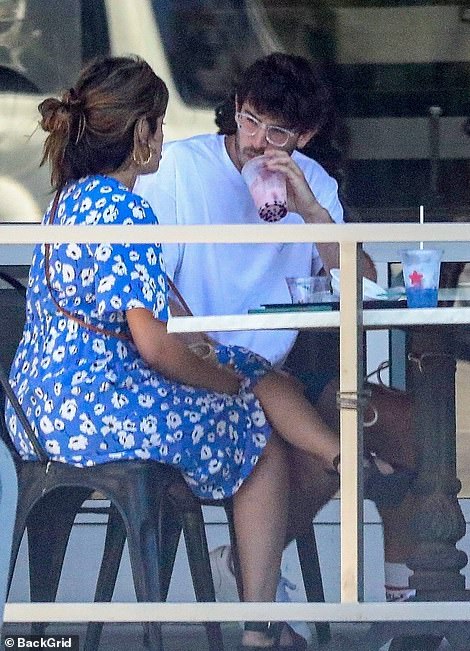 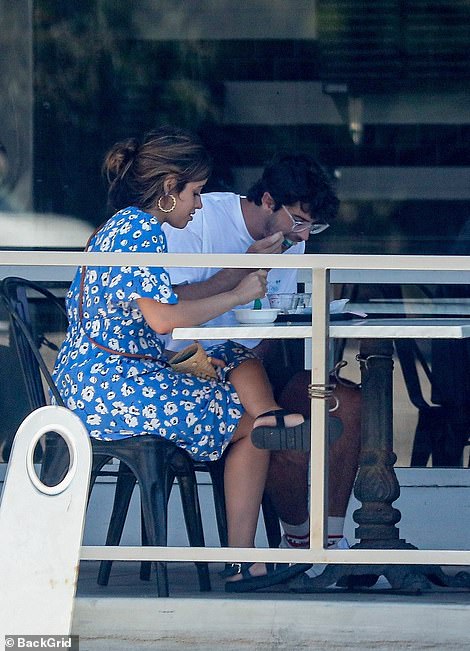 Deep conversations: Austin was seen looking and listening to Camila as she talked to him on their date

The two had known each other for years before, and had released their first single, I Know What You Did Last Summer, in 2015.

Shortly after, the two were spotted in July 2019 appearing to be more than just friends. During that time, Camila gushed about Shawn in an interview with Clash Magazine.

‘I feel like it’s so rare to meet someone in this industry and find a person of that quality, and I feel like Shawn is that person for me.’

After two years of dating in 2021, Shawn shared an adorable anniversary picture of the two, with the caption, ‘Happy 2 years my baby.’ 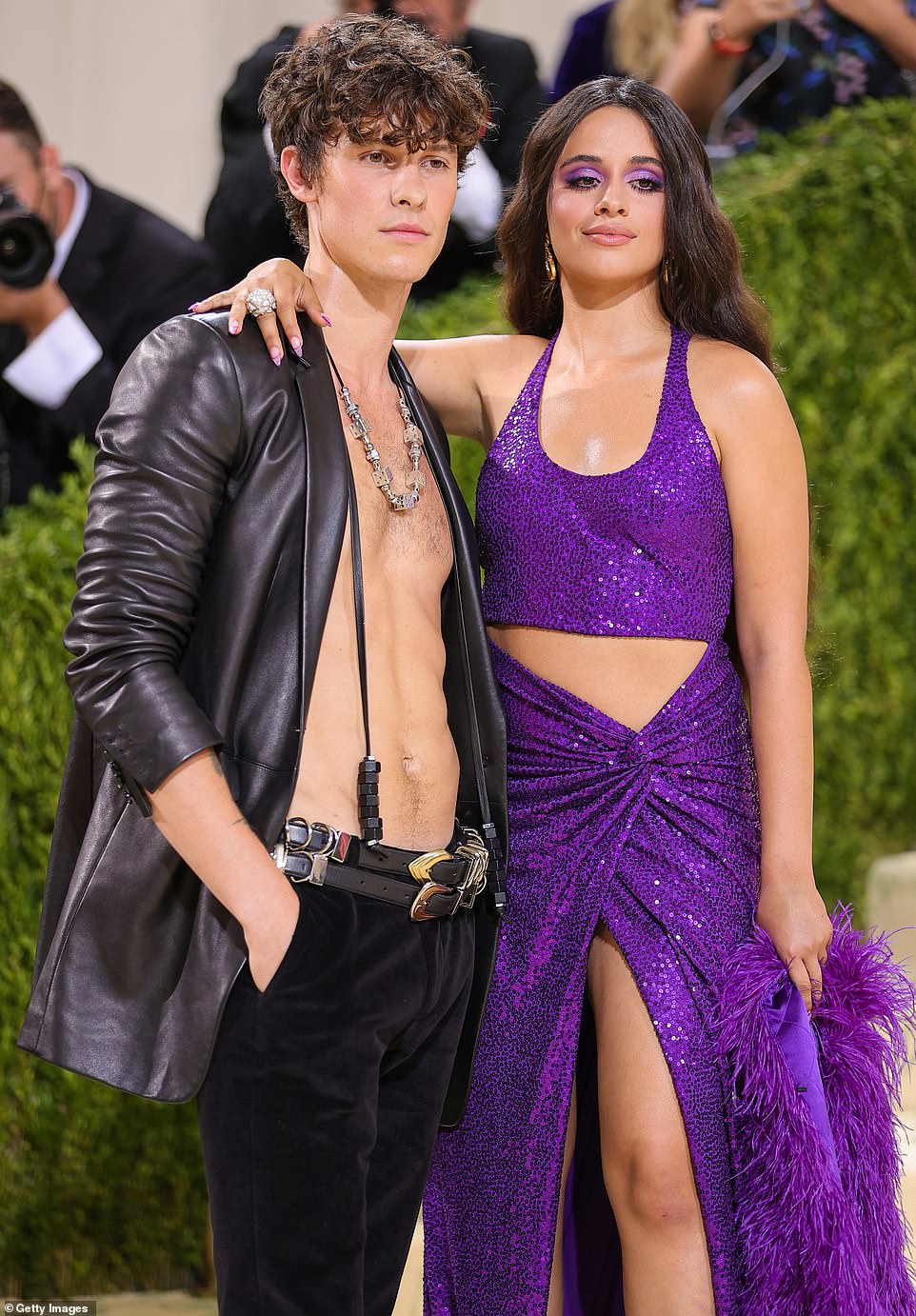 Collaboration: The two released their first single in 2015, and then followed up with their second song with Senorita in 2019 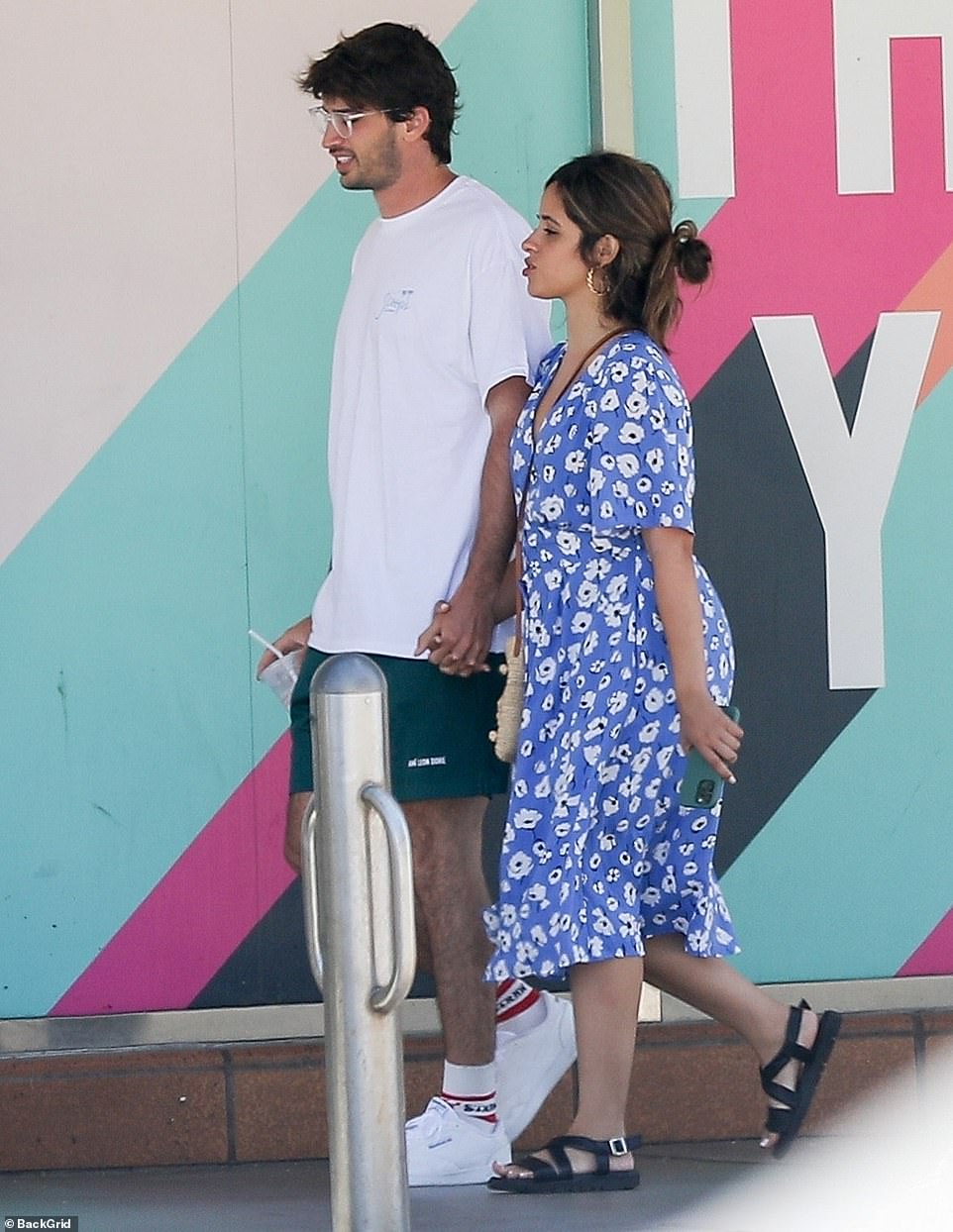 Rumors: Speculation sparked that Camila and Austin were an item when they were seen in Los Angeles together in June 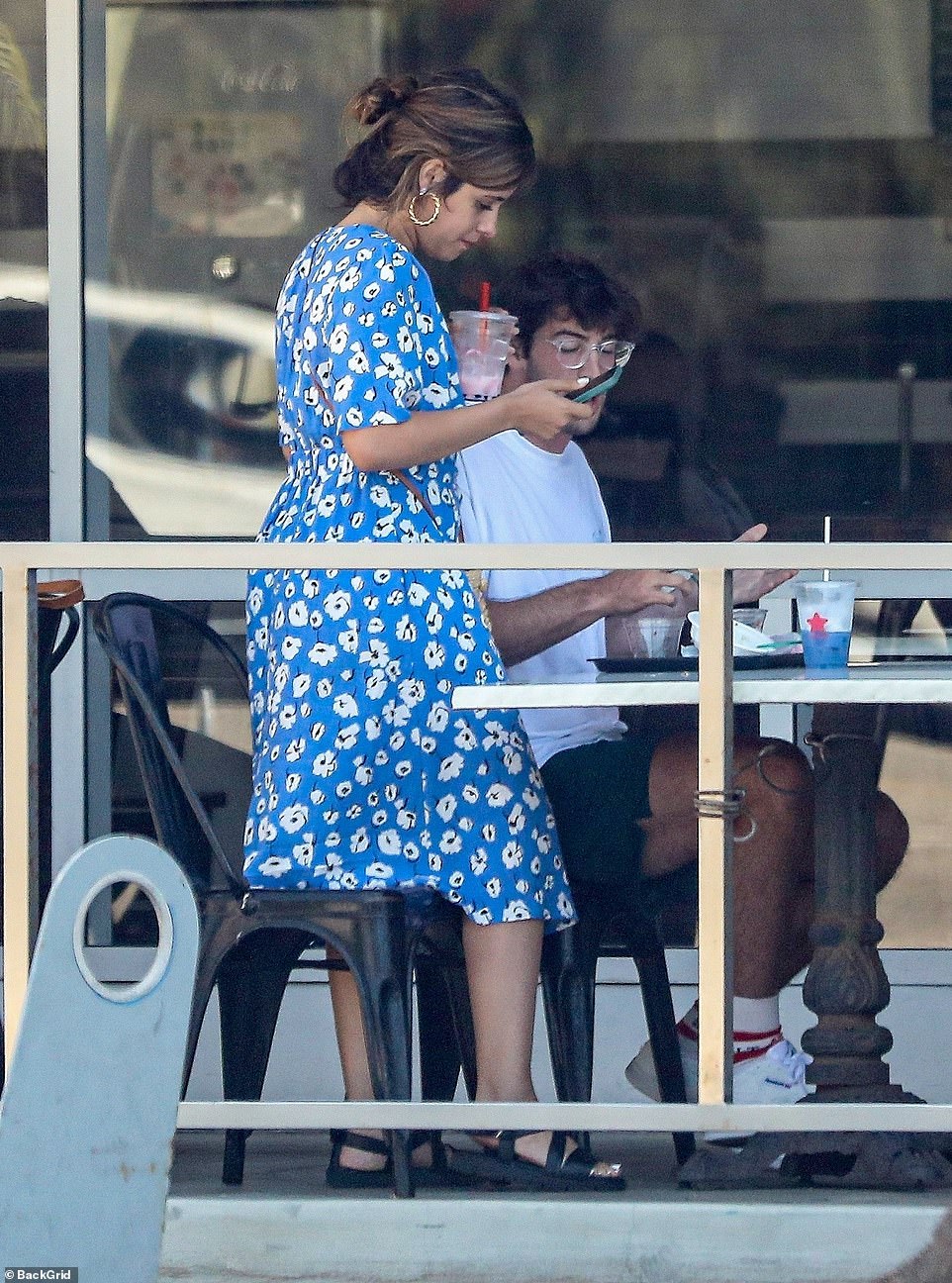 Sunday date: Camila was spotted checking her phone as she ate a bite to eat with Austin

In October 2021, the former Fifth Harmony member opened up to Glamour about the difficulty of their relationship constantly being in the spotlight.

‘When stuff that’s negative is out there, it’s going to get to you,’ she explained to the publication.

‘So yeah, that’s very, very challenging. I feel like it’s another thing therapy has been really helpful for,’ Camila added.

One month later in November, the couple decided to go their separate ways and announced their split on Instagram. 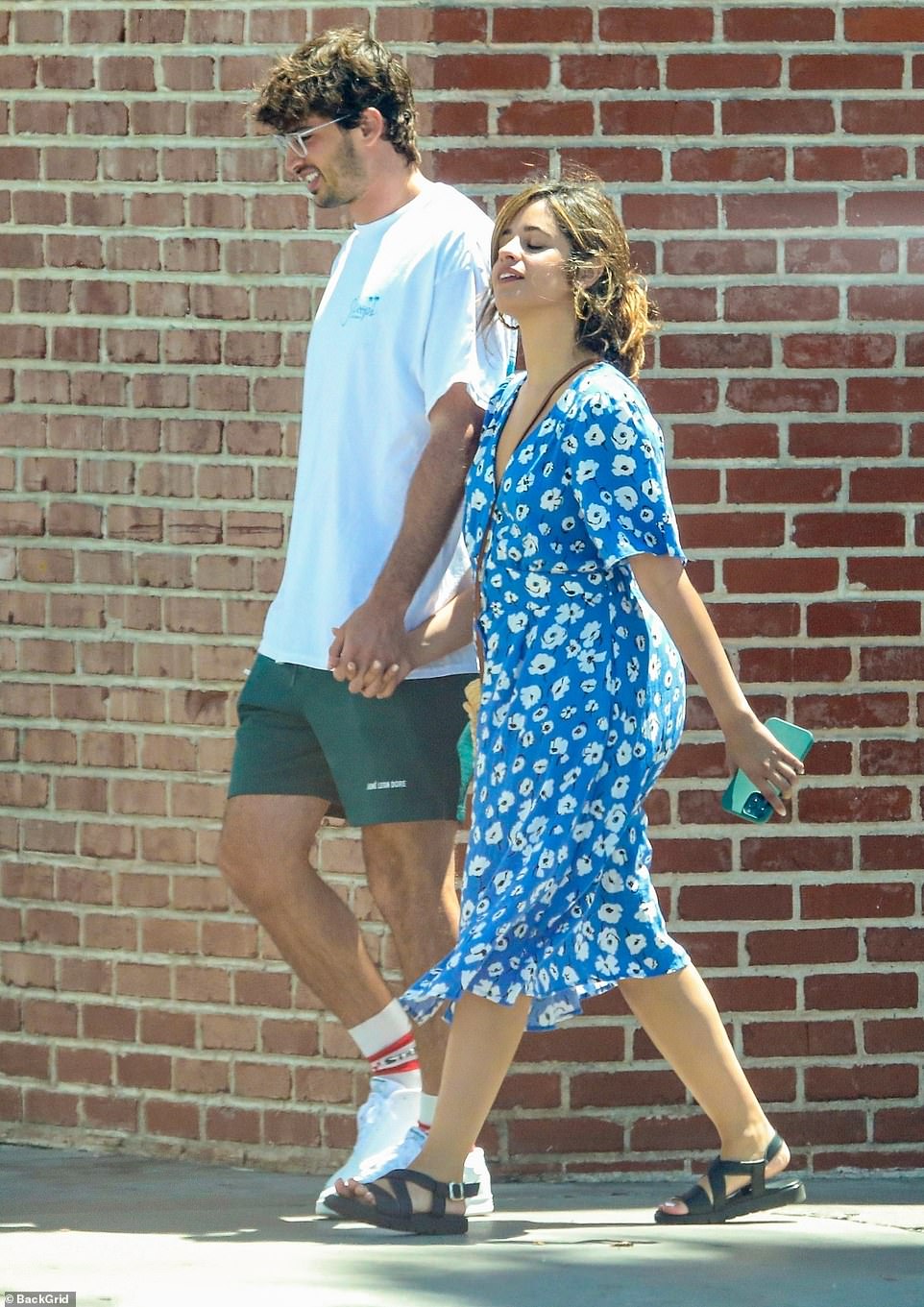 Relaxing: Camila appeared to be in a very happy mood as she walked closely with her new beau 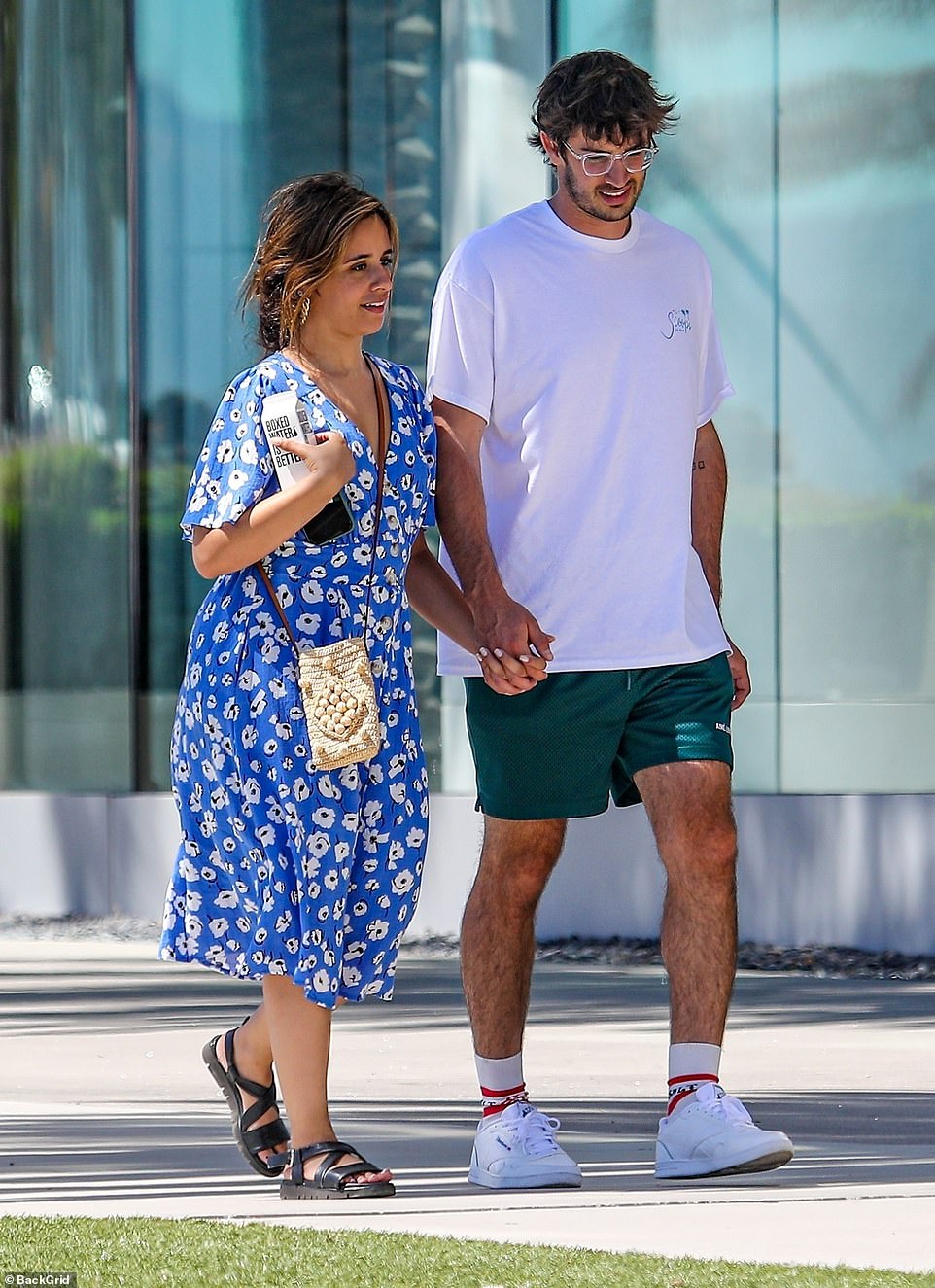 No public statement: Although the new couple have been seen in public, Camila has yet to announce the news publicly

‘Hey guys, we’ve decided to end our romantic relationship but our love for one another as humans is stronger than ever. We started our relationship as best friends and will continue to be best friends. We so appreciate your support from the beginning and moving forward. Camila and Shawn.’

Despite having broken up, the two appear to still be on good terms, and were seen together in Miami earlier this year in January.

During an interview with Zane Lowe in March, the singer opened up about Shawn and how she feels since their break up.

‘I love Shawn and I feel like there is literally nothing but love for him,’ she revealed. ‘As I get older, the priorities shift. And I feel like that was that way for both of us. Because we both started so young too, it’s like we’re really learning how to be healthy adults.’ 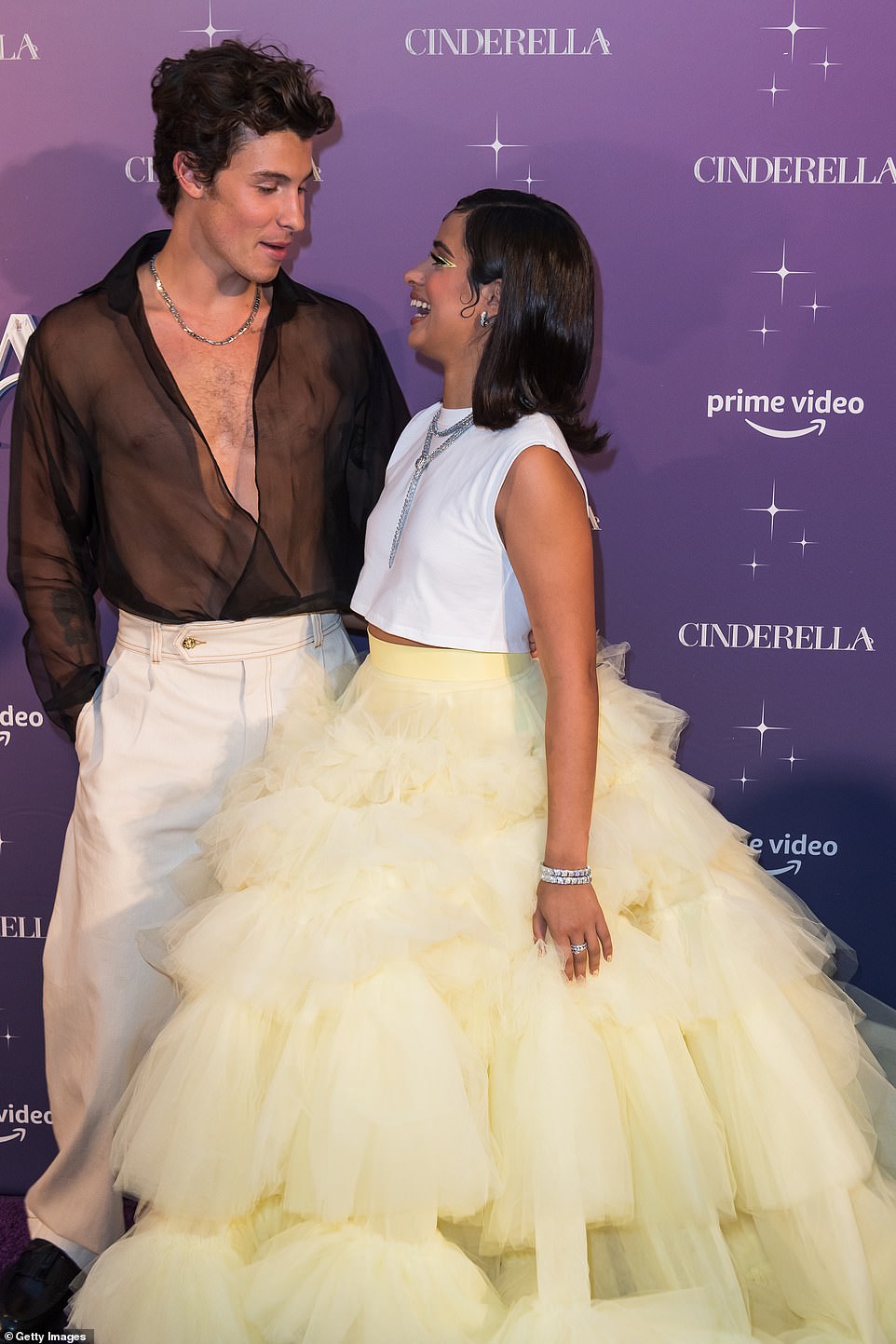 Still growing: Despite breaking up, the two exes seem to still think of highly of each other and continue to support one another 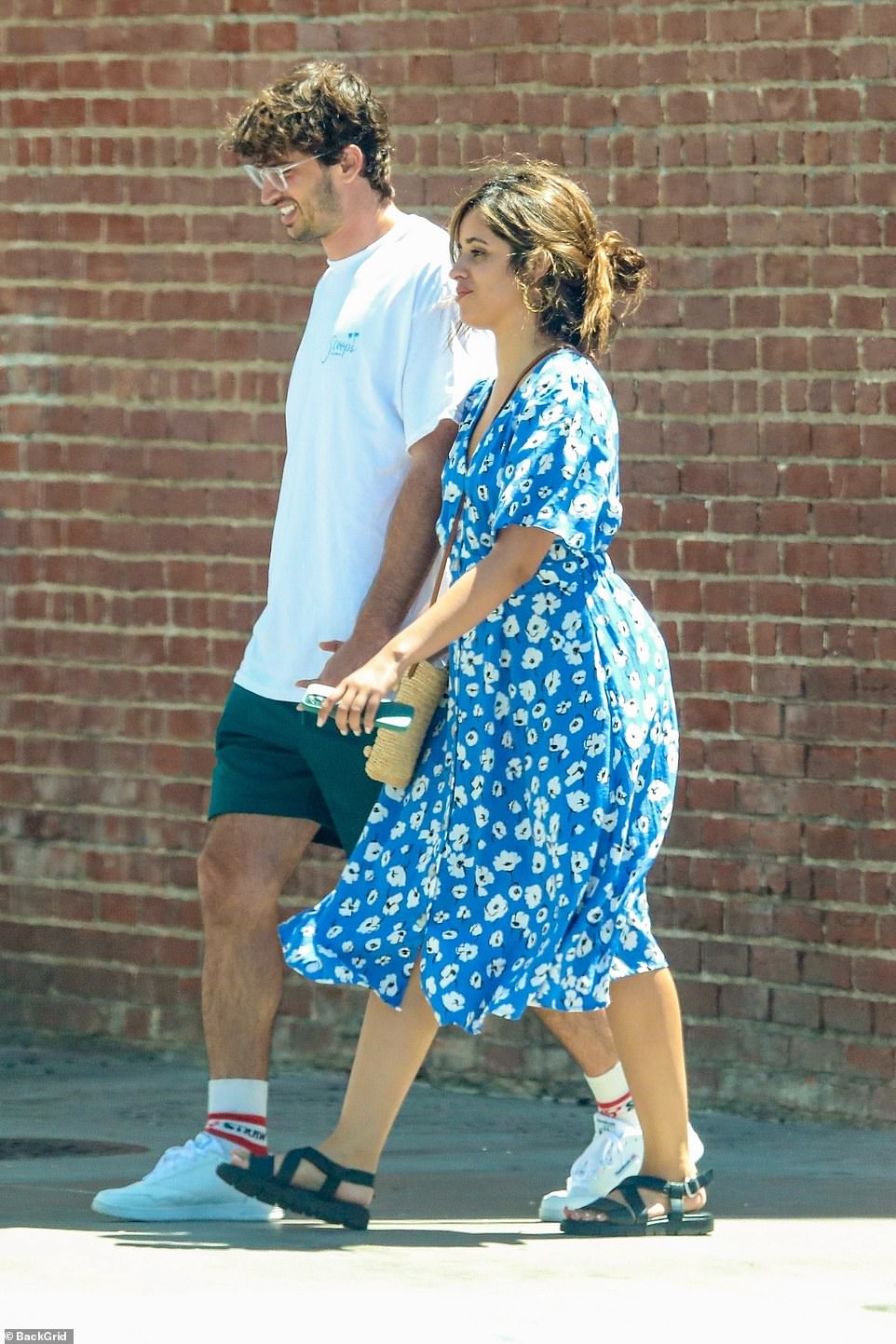 New step: Camila appeared to be very happy to have a new man in her life as she stepped out with the CEO on Sunday